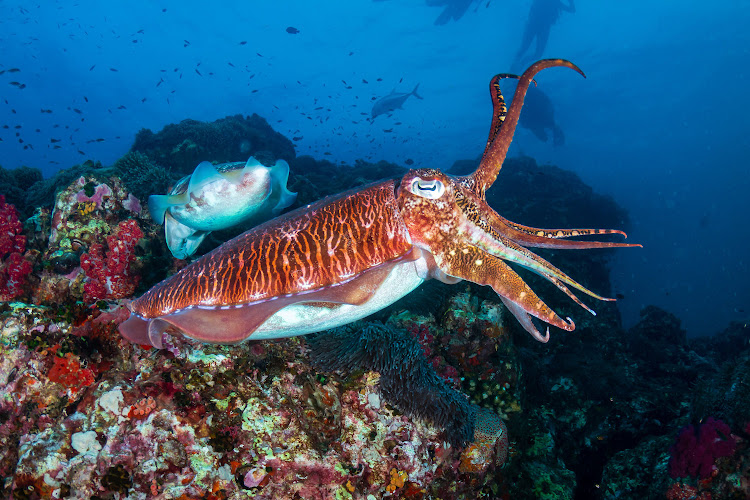 Thanks to Kate Winslet I have realised I need to channel my inner cuttlefish.

It’s a pole vault of logic, I know, but hear me out.

I am summoning my inner “cousin of the squid”, not because I wish to end up in a parrot’s cage as a chalky calcium fix, nor because I would love an impressively pronounced brain-to-body ratio. Equally, this mollusc-inspired mindfulness had not come about through a desire to emit and then vanish behind a huge gust of brown pigment when I’m feeling alarmed. Though, I will admit, the latter does sound helluva appealing.

Rather, I am hoping to embrace delayed gratification — a trait that these smart aquatic invertebrates possess, so scientists have just discovered.

In March this year, University of Chicago researchers announced that they’d found that cuttlefish “can delay gratification by resisting readily available snacks in exchange for better ones later on”. As one of the university’s student papers, The Chicago Maroon, went on to explain, this “marks the first time a link between self-control and intelligence has been found in an animal other than humans and chimpanzees”.

If you have ever suffered from anxiety, you will know how terrifying the condition can be. But the best tonic might be a simple stroll
Voices
1 year ago

The researchers found that, over time and in presenting a sample of cuttlefish with a small meal followed by the larger meal, they started to skip the first course entirely — opting instead for the bigger second one.

Basically, my sepia-tinged (and filled) gurus are able to pass on immediate pleasure in the hope that they’ll get an even better outcome or reward in the longer term. They’ve presumably known this for their whole existence but me, an allegedly evolved hominid, has only just been reminded of its power in this, the middle of 2021.

Really, it was the HBO hit Mare of Easttown that did it. If you haven’t watched this fantastic whodunnit, starring a perfect Kate Winslet, you’ll find all seven episodes on Showmax. However, when the series was first released, it was done one episode at a time, over seven weeks.

As the final instalment swung around, everyone was completely transfixed. We’d had days to speculate over who the bad guy was, had all been postulating theories for weeks, and were flip-flopping between ideas and emotions by the second. I must have had at least five lengthy conversations with my bestie on the topic. And, because I saw the final episode a few minutes before her, I received a menacing text in advance warning me to “say absolutely nothing”. I loved the series more for watching it this way. My sister reminded me that many aeons ago this was how we watched everything. “Buffy the Vampire Slayer, 5pm, M-Net Open Time on Friday,” she flashbacked, “that was my jam! I had to record it if we were busy, and waited for it all week — I was so excited.”

Kids today will know nothing of what we speak. Recorded? Open Time? But even for their parents and, in fact, anyone else, today our lives are one instant binge after the next. Sure, a weekend of watching every season of Veep that they’ve ever made in one go is deeply enjoyable, but makes for zero anticipation and buildup and little to look forward to. Everything is instant in the gratification department these days. Remember when we had to wait for photos to be developed and letters to arrive in the post?

The funny thing is that Covid-19 has actually done us a favour on this front. Before the virus, merriment came so easily and immediately. Did we fully appreciate last-minute international jaunts, big weddings, or simply packing out a cosy restaurant in the middle of winter?

Now, I have Mare of Easttown-like anticipation for when we’re all vaccinated and will be able to do all of that again freely. A night out partying and dancing is first on the list and sounds too heavenly for words.

I’m going to make like a cuttlefish and hold out through some fine but pretty meh moments right now, then I’ll really be able to savour the second course of normal life, when it comes, BIG TIME.

• Buitendach is Wanted’s former editor, contributing editor to the Financial Mail, and has recently done a lot of googling of cuttlefish.

LUKANYO MNYANDA: Leaving on a jet plane. Or maybe not

While vaccination means parts of the world are getting back to 'normal', South Africans are still suffering the uncertainty of ever-changing rules
Voices
1 year ago

To go on a great trip we don’t need to use our passports at all, explains Sarah Buitendach
Voices
1 year ago