It all starts with a sniff. In June, a wildebeest on the plains of the Serengeti in Tanzania will smell water and begin the trek north towards the Maasai Mara National Reserve in Kenya. Thousands and thousands follow. Well, animals like to keep up with the Joneses, so zebra, gazelle and other mammals also join the pack.

Almost two million plains game will make the journey across to the Mara, where they will chomp grass for five months. Then, having depleted the grocery supplies, they move back to the Serengeti.

This great migration is one of the 10 natural wonders of the world. In my (biased) mind, no sentient being able to tell the difference between a warthog and an impala would omit it from their bucket list.

We touch down at Ol Kiombo airstrip after a 45-minute flight from Nairobi and are picked up by our Maasai guide.

We spotted our first game as Steve showed off his impressive Paris-to-Dakar skills through some muddy crossings.

Around us lay the iconic Kenyan vista: endless fields of gleaming grass stretching to the horizon dotted with umbrella thorns.

Take pity on lions. You'd think having the most impressive purr on the savannah would make their life a breeze. But compare their lot to the tribulations of Cristiano Ronaldo - that apex predator in the realm of international football. His fans may think his life is all jugfuls of Cristal and Playboy bunnies. But for every magnum quaffed there's an avaricious manager trying to put him in an embarrassing underwear ad.

Well, lions have a tough time of it too. Even hunting as a group they only have a 30% success rate. Who said being the biggest cat in the 'hood was all sailing on the plains?

Matthew Savides explores three ultra-plush camps in Botswana which offer amazing game viewing and a fascinating insight into survival in one of the ...
Travel
5 years ago

Still, if you were a lion and could choose where to locate the family business, this would be high on the list.

Many safari lodges throw around the "ecotourism" label as freely as the patrons of a certain Saxonwold shebeen toss around moolah. Some might claim green cred with a gesture as superficial as organic soap in a bathroom the size of Monaco. Guests love the illusion of green cred.

Another phrase that generates excitement is "community participation". Foreigners like to believe that the locals crammed in family dwellings smaller than their tents are at least benefitting from their visit. Again, some of this "participation" has the same impact as a pair of lovebirds gate-crashing a vulture convention.

But our destination was Basecamp Masai Mara, a lodge that set the benchmark for how lodges should operate and the first Kenyan camp to receive a gold eco rating. Barack Obama chose Basecamp when he brought Michelle and the girls on safari in 2006, and he knows a thing or two about sussing places out. 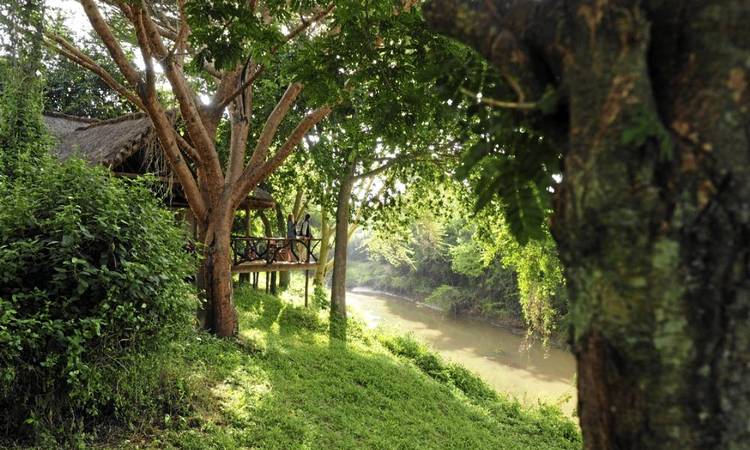 We arrive at sunset. A short walk across a wooden suspension bridge leads us across the banks of the Talek River and into the rustic camp, enveloped by a cathedral of green.

My tent overlooks the river. It's comfortable and spacious with an en-suite bathroom, but no unnecessary fripperies. Enough to enjoy nature in absolute comfort but to keep our imprint to a minimum.

The genesis of Basecamp was a meeting between Norwegian Svein Wilhelmsen and a Maasai chief. One evening while sitting together around a fire, Chief Ole Taek told Wilhelmsen his fears for the future of his people and the land. Basecamp's long history of close co-operation with the Maasai started there.

Today, 31-year-old Steve embodies the partnership that Basecamp and the leaders of the Maasai community have fostered: one that holds that preserving the land benefits both the animals and the humans who live on it.

"As young Maasai men, we used to kill lion to prove we were men. Now we save them."

I wake up the next morning to a chorus of birdsong and yet another sunny day in Africa. A vervet monkey sits perched on the stoep, doing what vervet monkeys do best: assessing the opportunity for mischief.

Our first big tick on the morning game drive is a black rhino - we're very lucky as their numbers are horribly depleted. We also spot two different prides of lion with cubs, and zebra seeing off two hyena.

In 2010 Basecamp and the Maasai successfully established the Naboisho Conservancy. More than 500 of the families who own the land have moved to the fringes of the conservancy in exchange for a monthly rent.

Wilderness is one of two Basecamp lodges in the conservancy. It harks back to the days of the pioneer safaris. Not that we're slumming it, mind you. After a three-course meal ending with sublime banana pancakes, I order a hot bucket shower and flop into a comfy bed. Like the lions in the grass, I am reminded that all this safari-ing is hard going.

A hyena lopes across the plains of the Saddle Valley at sunrise. We set off on a walk. It is magical, serene, mesmerising. Just the wheat-coloured savannah and the eternal cycle of nature.

Steve stops in front of a whistling thorn acacia. He taps the foliage with his rungu, a weapon similar to a short knobkerrie. An army of cocktail ants emerges onto its branches. The whistling thorn and the cocktail ant could give us a TED talk on co-operation. The ants stage a home invasion of its seed pods. As soon as an animal nibbles its leaves, the ants emerge to bite the culprit. They also release a foul odour that smells like a carcass. It's called paying the rent.

Perched on top of a hill, Eagle View camp provides a fantastic perch from which to experience an endless procession of game passing by: running, grazing and drinking as they have for millions of years.

When Teddy Roosevelt went on safari in 1909 with 250 guides and porters and a large surplus of testosterone, he managed to slaughter no fewer than 296 animals.

Roosevelt described a rhino his party was tracking. "He seemed what he was, a monster surviving over from the world's past, from the days when the beasts of the prime ran riot in their strength, before man grew so cunning of brain and hand as to master them."

Thankfully there are no guns or mankind's bloodlust to be spotted as I stare across the veld.

I'd take cocktail ants over Roosevelt any day. 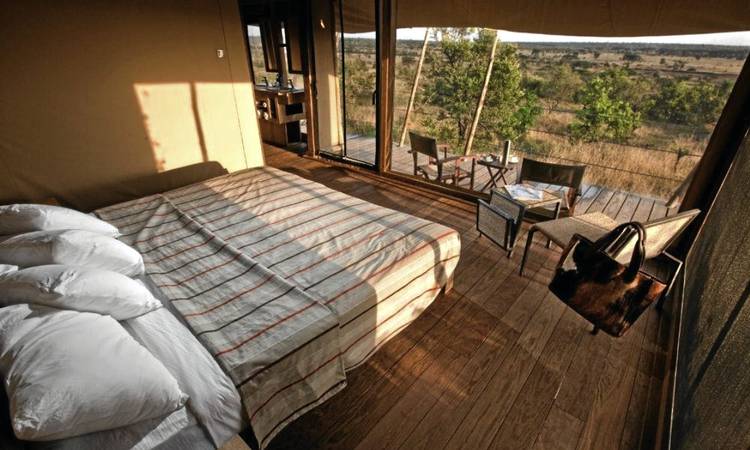 • Rates for the three Basecamp lodges range from approximately R2,800 to R4,200 per person per night. This includes all meals and two game drives. Other activities such as night drives and walks are also on offer. Or just stare in wonder at the bush.

If you want to stay in the Obama tent, book early as there is a steady demand for the bed of the first Kenyan-American leader of the world. Also check out the Obama Forest, where he planted a tree, one of 70,000 the lodge and its guests have planted. See basecampexplorer.com.

• We stayed at the plush Tribe Hotel in Nairobi, one of the hippest venues in town, and set in one of its upmarket 'hoods. They serve the best mushroom soup on the planet (no, I could not get the recipe). Their award-winning spa is also worth exploring. Rates from R3,700 per night for a room - but shop for deals on the internet. See tribe-hotel.com.

HOW TO GET THERE:

• We flew to Nairobi from Johannesburg on RwandAir via Kigali. A return flight costs approximately $386 (R5,800). See rwandair.com. This airline is generally impressive. The plane from Kigali to Joburg was the newest aircraft I can ever remember flying on, and the food is usually better than that bog-standard plastic fare.

• Safarilink has flights to the Mara from the smaller Wilson Airport in Nairobi. The flights are 45 minutes, much less than the six hours it would take to drive to the Mara. Return flights cost in the region of $361 (R5,000). See safarilink.com.

Nadine Dreyer was a guest of Basecamp Explorer.
This article was originally published by the Sunday Times. Read the original article here.

Saddling up: adventures on horseback in the Waterberg

Samara Private Game Reserve: a luxury lodge in the ...