Culture, location, and music come together in a Namibian destination that’s inspired by connection of all kind 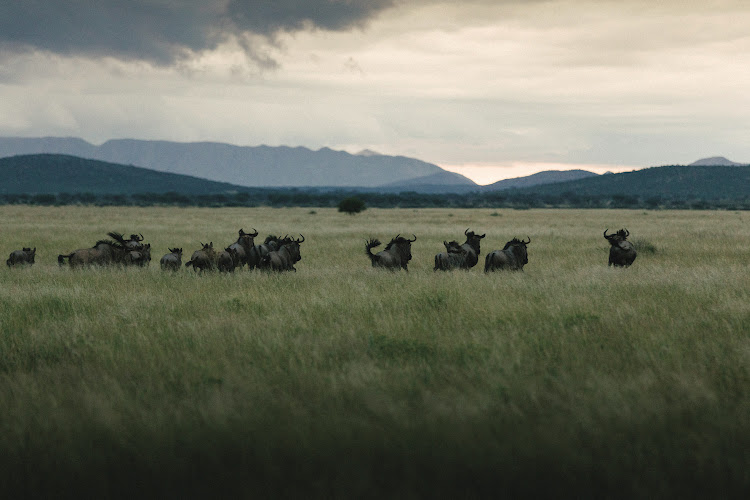 In recent years, travel has evolved far beyond mere sightseeing and bucket-list box ticking. More and more, travellers are looking for transformative experiences — those that alter or expand their world view — and placing greater emphasis on conscious travel. With the shared view that travel should, above all, be about connection and immersion, Oliver Ripley, Kfir Levy, and Eduardo Castillo co-founded Habitas in 2014 around the idea that “luxury is more about experience than anything else”. What began as temporary pop-up retreats developed into a more lasting travel proposition and, in 2017, they opened Habitas Tulum in Mexico. Habitas’ first retreat outside of the Americas, Habitas Namibia followed earlier this year, with escapes in Costa Rica, Bhutan, and Saudi Arabia planned for the near future.

“We quickly realised that what people wanted and needed was the ability to connect with like-minded people and live a life with purpose. We created something for ourselves, something that we wanted to experience and hoped our friends would too,” says Ripley, Habitas’ CEO. In Namibia, this concept is manifest in a lodge that embraces the landscape in spectacular fashion. Set on 50 000ha, its hilltop perch gives all 12 tent-inspired suites and the main hub panoramic views.

From some vantage points you can enjoy the sunrise, others the sunset, but each benefits from the mind-blowing sense of space that you’ll find in very few places on the planet aside from Namibia. This setting — the vastness, the stillness, the ancient story — has informed the design. Combined with Habitas’ overarching concepts of community and connection, it has inspired an immersive experience that weaves in local customs, traditions, and rituals.

“I’d always fantasised about one day looking at the African expanse, vastness, and sky, connecting to it, being grounded in it. The first time I set foot in Namibia I was overwhelmed with its impact on my heart and soul. All I wanted to do was preserve it and to be its steward, like the many others who have done so for centuries before me,” says Castillo, Co-founder and Creative Director. This comes through in the physical makeup of the lodge, whose open-to-the-elements design (tented sides that roll up completely to the outdoors), simple, eclectic furnishings, and earthy colour palette and materials all refer to the landscape that surrounds you. Less is more here — there are the requisite comforts and luxuries, but minimal clutter. The idea is to be able to reconnect with nature. 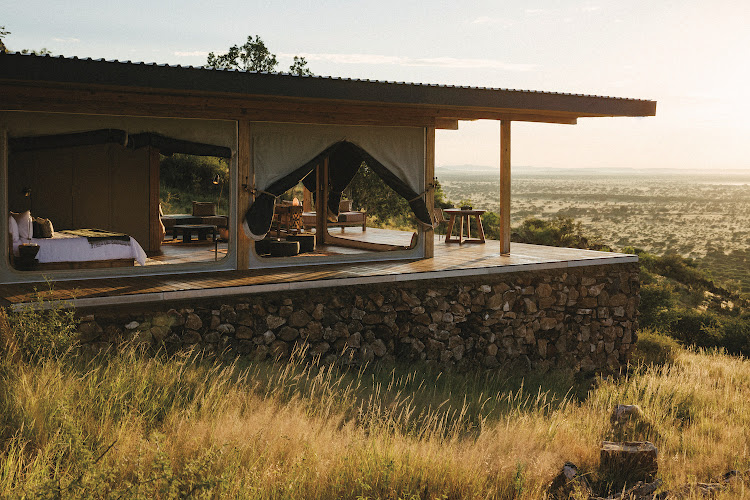 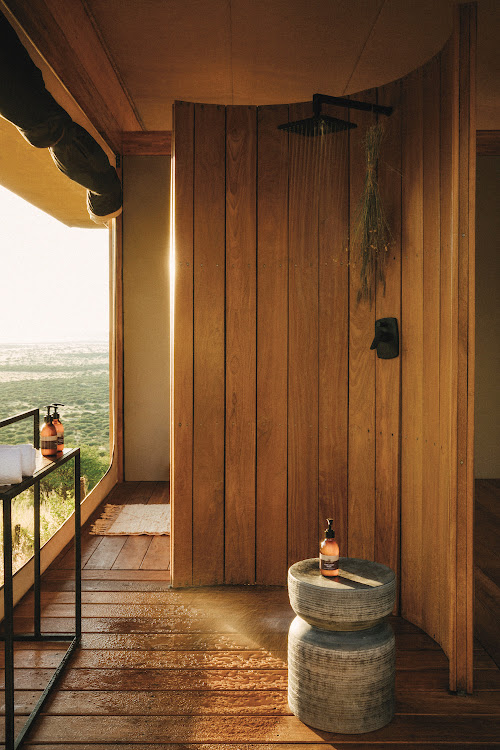 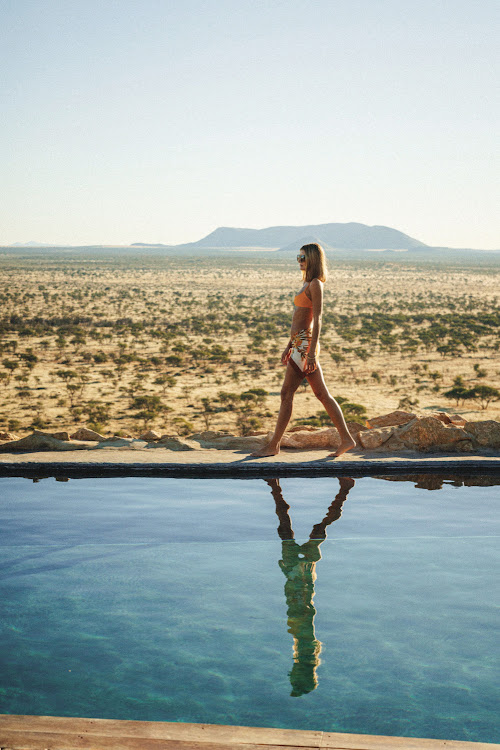 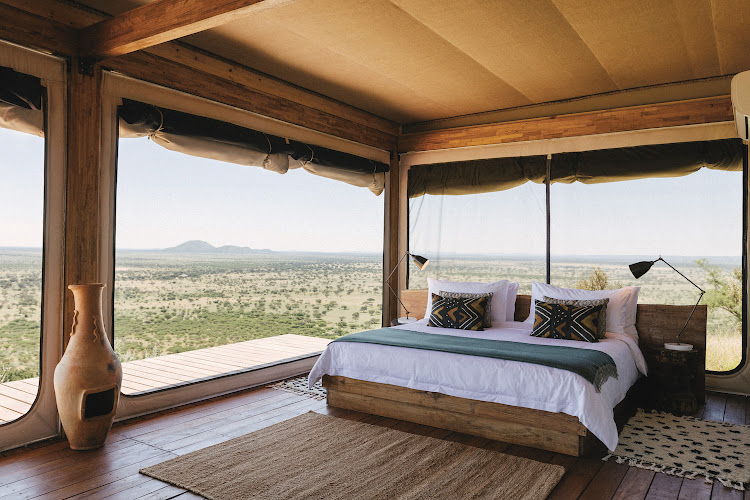 Nature played a fundamental role in the creation of Habitas Namibia. “When designing the property, we aimed for full immersion in the landscape, and designed with sustainability in mind. For us, luxury is the ability to connect with nature. Our lodge is designed for human connection, with gathering spaces and panoramic views as the backdrop. Our philosophy is simple: we let nature speak for itself,” says Levy, Co-founder. This celebration of locale and local has been woven into the programming, which celebrates specific elements of Namibian culture and embraces an ethos of holistic wellbeing — on a physical and a spiritual level. 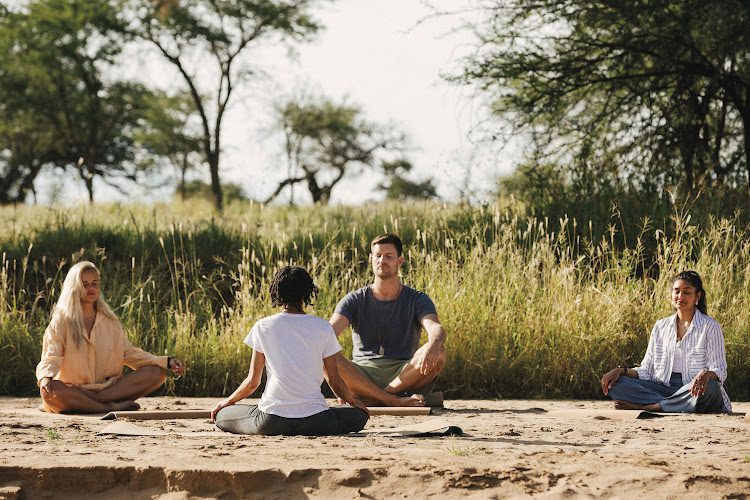 A homage to Namibia’s cultural diversity and heritage is embedded in daily excursions and activities. These include an intention-setting welcome ritual around burning Himba myrrh (an aromatic resin collected by the nomadic Himba people), bush walks focused on medicinal plants, and bow-and-arrow making with Paulus Kambathi, who is Khwe (a local San Bushman group). There are also sound meditations and spa treatments incorporating Namibian customs and ingredients. This ancient wisdom — based on oral storytelling, almost-lost arts, and a knowledge of the land — is something the founders wanted every guest at Habitas to experience, allowing them to leave with a greater understanding of the place they are visiting. 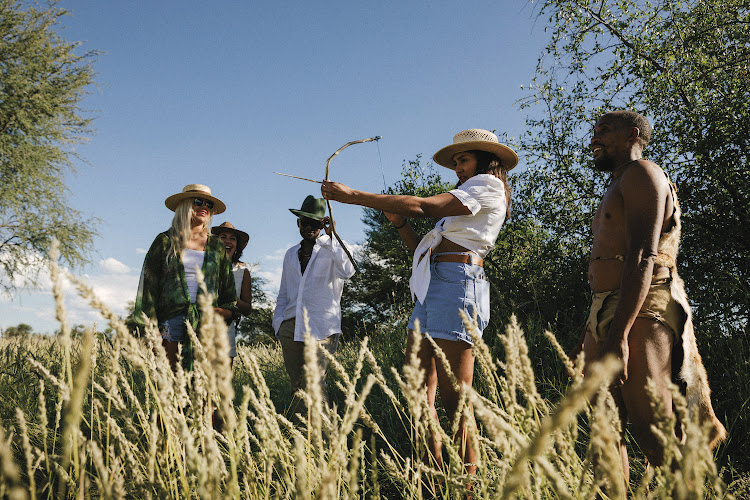 Local meets universal in Habitas’ relationship to music and dance. This trans-cultural mode of communication and connection has the ability to bring people together, and you’ll see it play out in primal fashion here. Music is a particular passion of Castillo’s, and the natural emphasis on it in the Habitas experience ties seamlessly into many African cultures’ use of dance as a ceremonial and spiritual rite. Since music is integral to the Habitas brand, the founders felt it was important to work with local artists. As a result, guests can look forward to unforgettable and interactive dance performances. 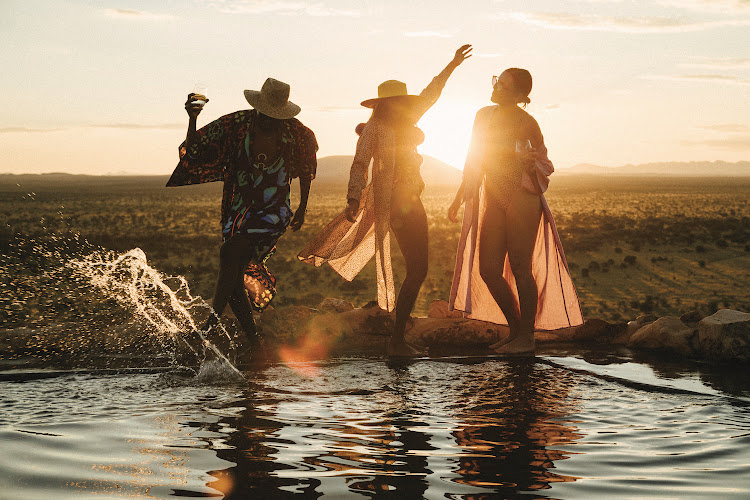 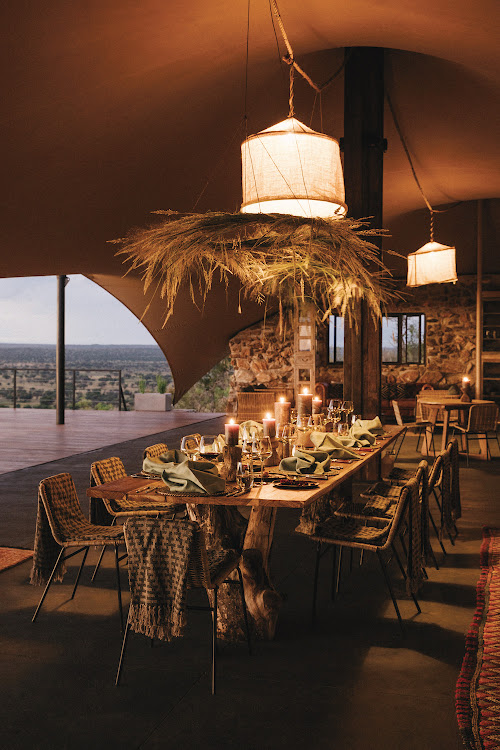 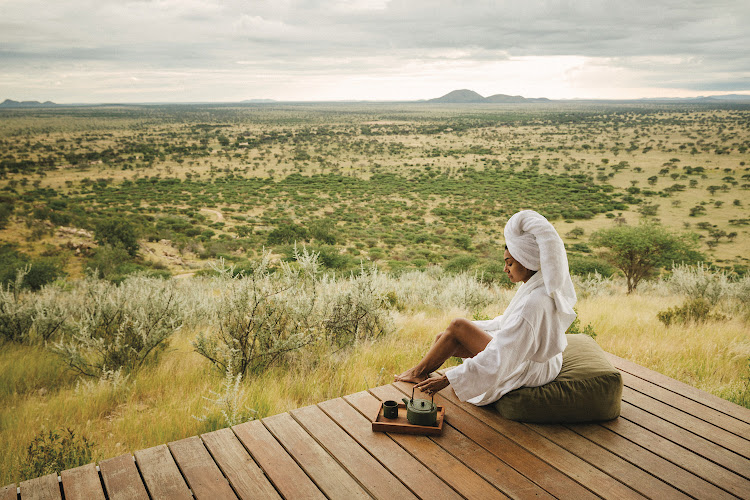 After meeting Namibian dancer and singer Vetunjona Uarije, also known as West, and learning about his school of music and dance for children, Castillo wanted to help amplify his mission. The two have even recorded a song together, which will be released later this month. West is Himba, from the Kunene region, and he was drawn to dance at a young age. Now it has taken him all over the world. “Dancing is a major part of our culture. We have a dance for every occasion. It’s an important form of storytelling,” says West. “What I love most about performing is how music connects humans with each other, with energies, with ancestors — it’s all-encompassing. Every time I perform I feel the spirit of the living and the spirit of our ancestors unite, and it creates this magnetic energy.” Guests will witness this passion in action at the cinematic bush braai — one of the highlights of the Habitas experience. 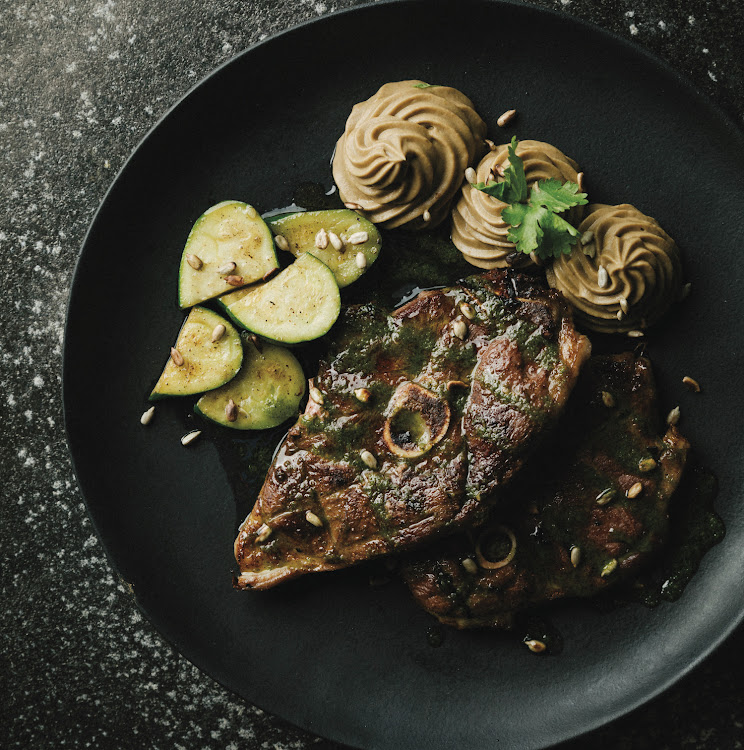 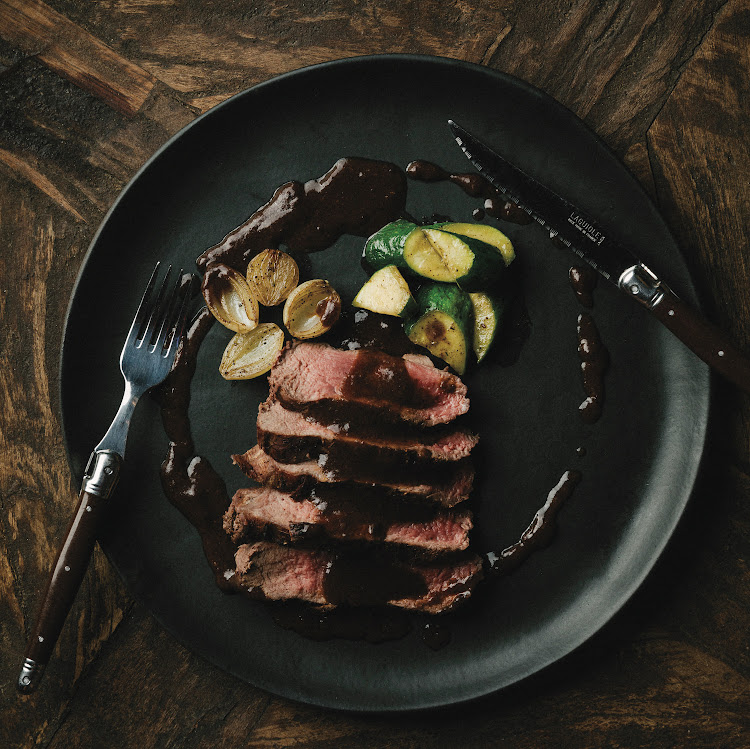 A banquet-style dinner in a dry riverbed lit by lanterns brings together guests under the stars. Here they are warmed by a roaring fire, around which West and his talented group dance. This encapsulates what Habitas is about, in a perfect confluence of its ethos — celebrating life, nature, and connection. 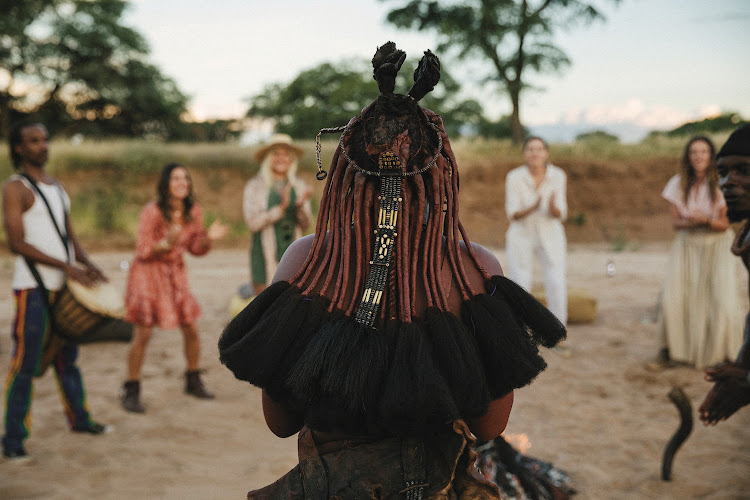