'Human' heads, dragons & sheep horns: The Gucci runway show that everyone is talking about!

Words: Jo Ellison
Alessandro Michele had drawn on a “post-human” Gucci cyborg to find his theme — and staged his show in a brutal, overlit surgical theatre
Image: Getty

Moreover, the biggest growth was in western Europe. “All of the brand’s main product categories contributed to sales growth in the directly operated store network,” continued the report. “Online sales soared by more than 80 per cent, while sales in the wholesale network were up 34.7 per cent on a comparable basis.”

The brand, led by chief executive Marco Bizzarri and his creative head Alessandro Michele, powers on. Quite what exactly it is about Gucci that has captured the zeitgeist is less easy to quantify. Certainly, sheer bravery must be key. How many brands, for example, would put their work in the hands of a little-known art illustrator, as Michele did with Ignasi Monreal to create their Spring campaign? Would other brands have been so relaxed about the mad, phantasmagoric world Michele conjures in Gucci’s name? Would other brands have been so unapologetically youthful in outlook, and so happy to desecrate so many of their codes?

For AW18, Michele was pushing boundaries again. This was fashion for the magical realists. The designer had drawn on a “post-human” Gucci cyborg to find his theme — and staged his show in a brutal, overlit surgical theatre. Everything was fluid — men, women, monsters were all here — and often combined. The clothes, many of which were quite straightforward (and highly commercial), were deliberately styled to obfuscate: scarves were wrapped to cover the head, crystal headpieces obscured the faces. Sweaters and 1970s suiting featured familiar American icons — a Paramount Pictures logo and baseball insignias. Other pieces were more theatrical. The costume element was strong. One model sprouted sheep horns, another carried a baby dragon.  And another, most alarmingly, toted a “human” head. 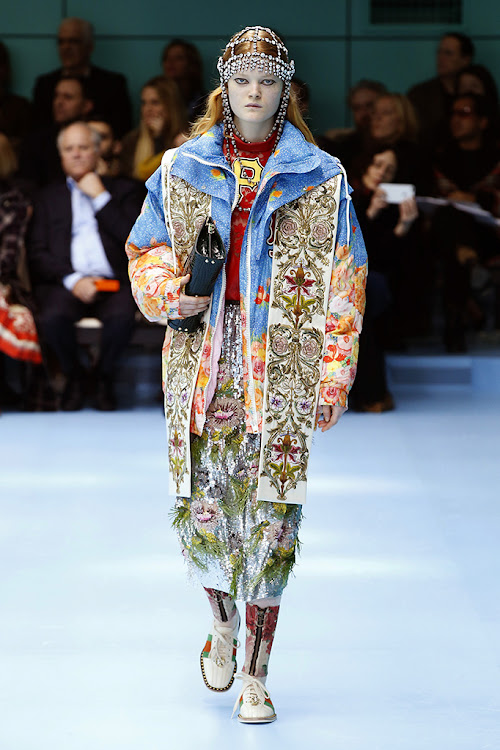 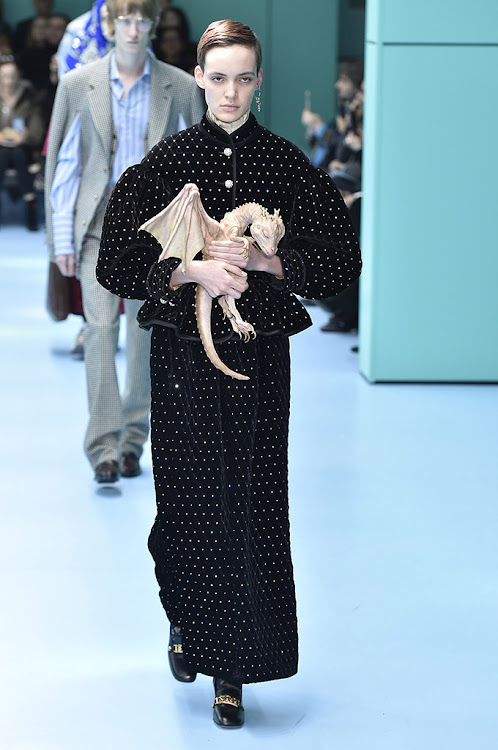 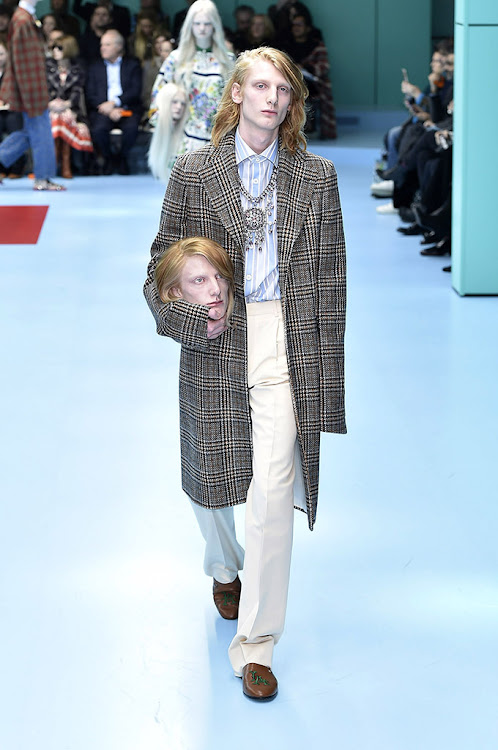 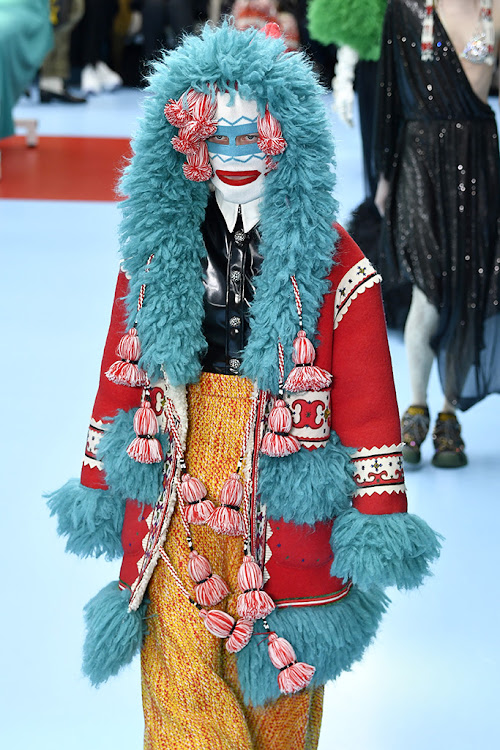 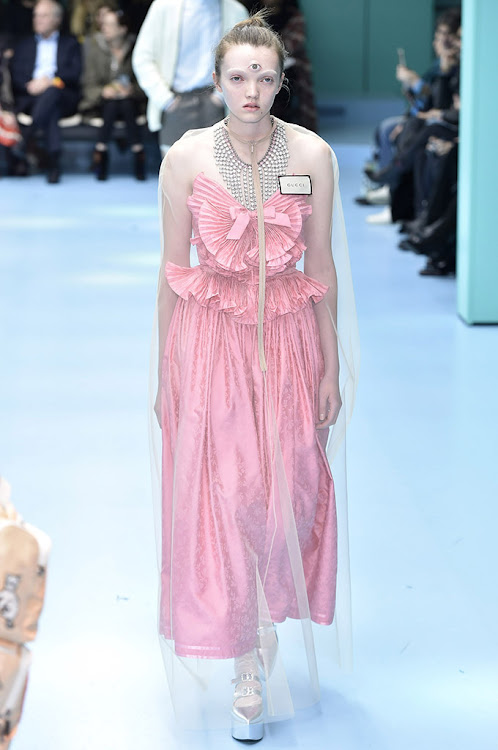 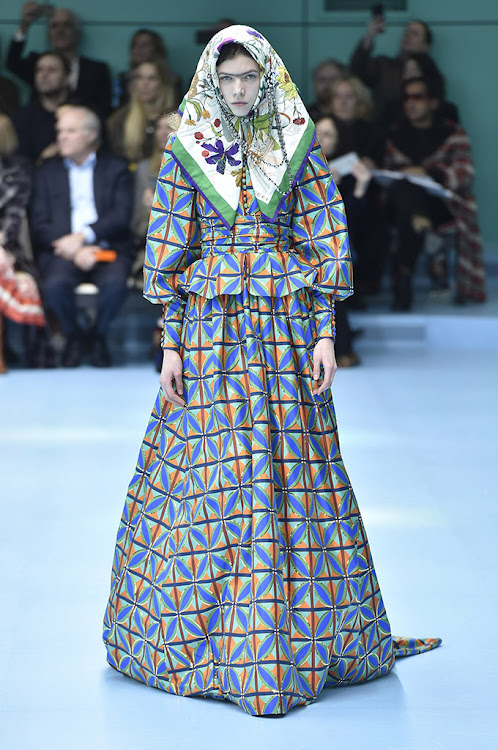 “I’m happy I was born as a hybrid,” said Michele backstage, referring to his bizarre “supernatural” mash-up. “The surgical set represented the way we change ourselves, our physicality and the idea of possibility. Clothes just help us become who we want to be.”

I was reminded of the film director Guillermo del Toro and his mythical aquaman film The Shape of Water. The show and the film had much in common, and del Toro is similarly preoccupied with the theme of transformation. “When people tell me... the stories I dream are impossible, I think of [Mary Shelley],” said the film-maker in his winning Bafta speech on Sunday. “She gave voice to the voiceless, and presence to the invisible, and showed me that, sometimes, to talk about monsters, we need to fabricate monsters of our own.”

Here Michele had literally fabricated a monster. He, too, has a Frankenstein fixation, and believes in monsters and mythical beasts to show our true selves. “We are all the Dr Frankenstein of our lives,” said Michele. “We work in the lab in our heads.” For Michele, clothes are the agents of transformation of ourselves. The things that allow us “to become”.

Such a point of view is not everyone’s cup of tea. It certainly sounds quite bonkers. But third eyes and supernatural details are all hot topics for the Game of Thrones generation. They love an ancient talismanic prop to wear with their Gucci sneakers.

Perhaps Michele’s tremendous commercial success has been in his refusal to be seen as a clothes-maker. “I plunge into the history of clothing. I love clothes. But my urge is to create something more powerful than fashion. A skirt is not enough.”

Gucci beams up a sci-fi fest for their new collection

The new brand experience that designer labels are investing in

Brands are looking to experiential marketing to get the attention and engagement from consumers of the oversaturated retail market that sees luxury ...
Style
2 years ago

As fashion month rolls on, we take a look at some of the fashion highlights from London Fashion Week
Style
2 years ago

The recent Autumn/Winter 2018/19 collections made a strong case for the future of NYFW, proving that New York fashion is still hitting the fashion ...
Style
2 years ago

In December 2014 Marco Bizzarri and François-Henri Pinault, scion of Kering, the French luxury dynasty, met at a Hong Kong hotel to discuss a task ...
Style
3 years ago
Next Article
© Wanted 2020 - If you would like to reproduce this article please email us.

Shoe art: Six brands that epitomise the luxury of ...

Luxe, with love: Luxury brands use their powers for ...

Are luxury brands losing their exclusivity?

The world is their runway: the five South African ...