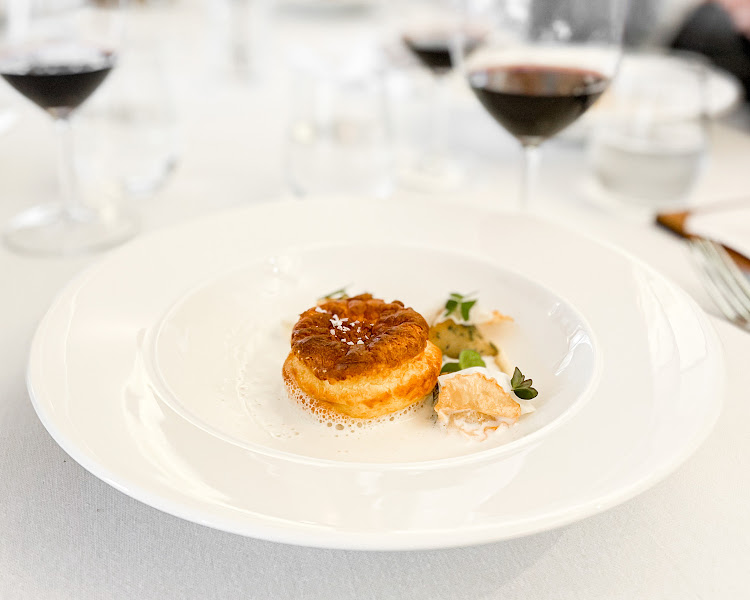 On the magnificent grounds of the recently revived Vergenoegd Löw Estate, one of the country’s oldest working farms, is where you’ll find chef Bertus Basson’s new restaurant, Clara’s Barn.

The building, expertly designed to preserve its heritage, has been renovated to match the estate’s Cape Dutch-styled manor house while retaining the original cobbled-floored stables and barn — from which the restaurant gets its name.

Inside, the whitewashed walls, original floors and exposed beam, thatched and vaulted ceilings are contrasted by contemporary design elements, from the brushed black, hanging stemware shelving to the slick and clean-lined bar counter. It’s a constant flux between old and new, the familiar and unfamiliar, heritage and the present — a fitting combination that is mirrored by the multi-course offering created by Basson and Clara’s Barn head chef Drikus Brink.

The talented young chef in many ways is the perfect candidate to bring this fine farm-inspired cooking to life. In addition to seven years of experience working across the Basson group, primarily at Overture, Brink grew up on a farm himself. He now brings those nostalgic flavours of his childhood to life through fine, yet certainly not fussy, food.

The power lunch is dead, all hail the catch-up meet-up

The menu offers guests the choice of a three-course or five-course tasting menu, both of which begin with “versnaperinge” (translated as titbits) and a bread course.

The small bites include an ode to the now defunct SA favourite, fish paste. Served in a Lucky Star tin, the paper thin, miniature, crispy toast slice is topped with a generous schmear of the in-house made spread and accompanied by a ring of pickled onion. 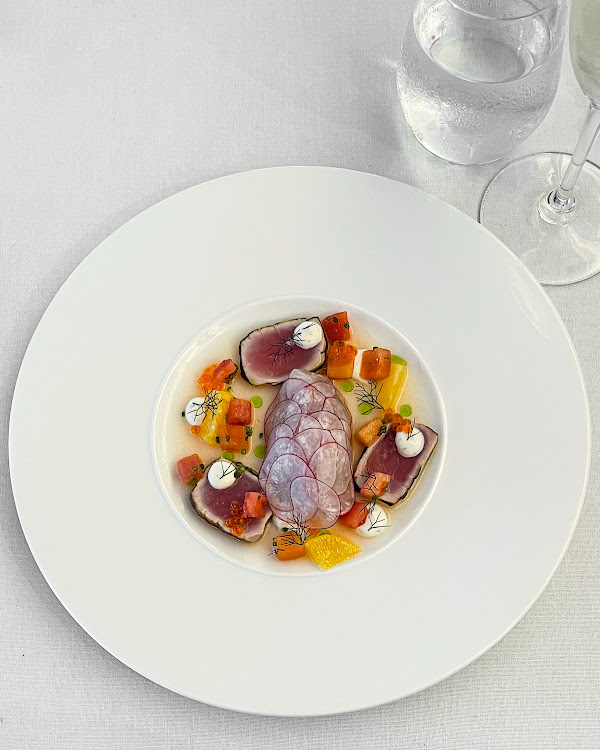 Accompanying the ode to Peck’s is an equally delectable amasi and popcorn crisp and a clever twist on the canelé, the pastry here filled with a smoked feta and chive cream. They are diminutive, little bites but they set the scene for what’s to come, magnificently.

The bread course arrives: the twisted-and-knotted white bun has been filled with cheese and baked before being brushed with a generous lashing of beef fat at the table. It’s what an after-school corner-cafe cheese rolled tried to be, but just wasn’t. Warm, rich, cheesy, the fat gently coats your fingers as you dip the chunks into beautifully piped homemade butter with biltong shavings.

It’s then on to the main meal: the difference between the three and five course, is simply the fact that the latter includes all the starters and the suggested main of Chalmar rump and a choice of dessert, while the former includes a choice of starter, main and dessert.

I go for the five-course, which begins with the trio of starters. The yellowfin tuna as both tataki and tartare, the delicate cubed and cured fish hidden beneath a scale-like shell of thinly sliced radish, surrounded by the seared medallions accompanied by orange segments, tomato concasse and dill cream. It’s a clean and fresh dish, wonderful acidity balancing the rich, fatty tuna. 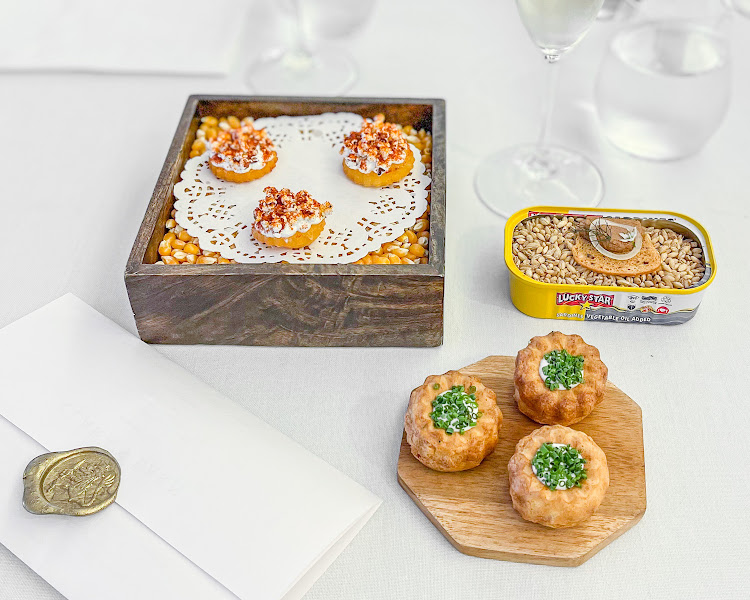 Next is the veal tartare, the delicate dish served together with toasted ciabatta and a mushroom pate. It’s an exercise in restraint, the umami forward dish delivers plenty of flavour with just a few well-chosen ingredients.

Of course, no Basson restaurant would be complete without a souffle, and at Clara’s it’s a starter rather than a dessert — but by no means any less delectable. The twice-baked Dalewood cheese iteration is rich, warm and comforting, all these feelings exacerbated by the glorious addition of earthy, well-cooked celeriac. It’s what winter should taste like. 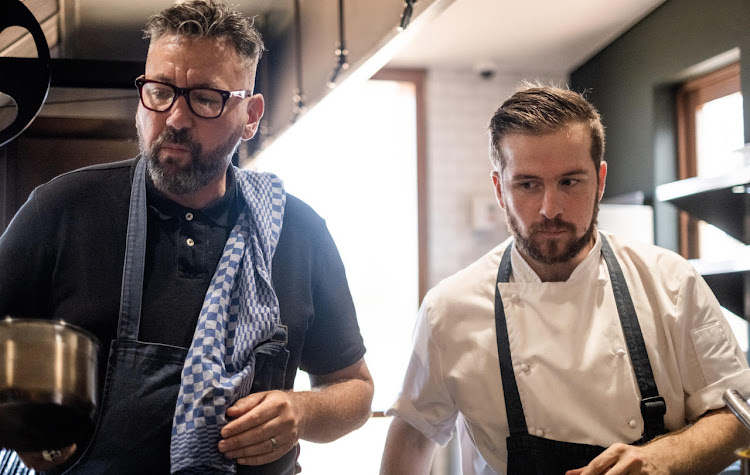 Main course arrives and it’s stunning in its simplicity, the four slices of perfectly cooked rump, a scrumptious oxtail croquette and a confit parsnip are then dressed in a deep and flavourful beef fat and tongue jus. It’s a clever dish, which not only showcases the produce in various forms but also its complexity of flavours. The rich oxtail, the tender rump, the soft tongue and the deep fat jus just work so well together. 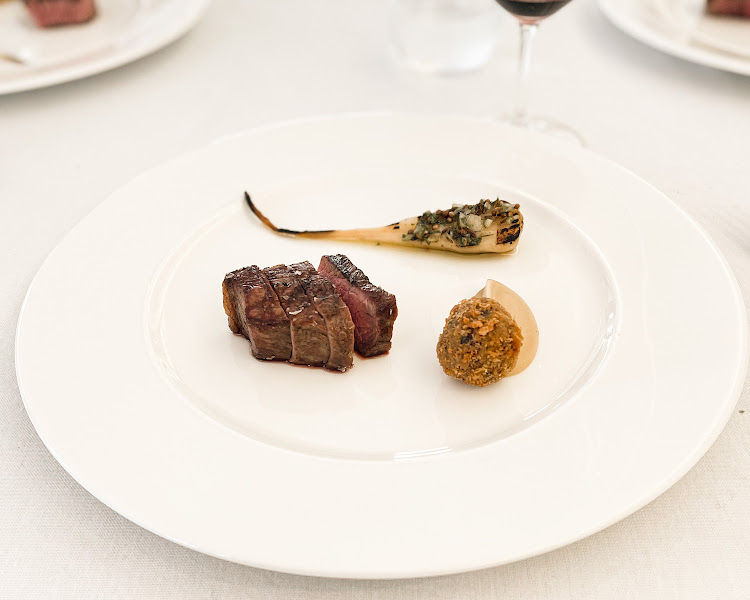 Last but not least it’s dessert, and while I lament the lack of the souffle, I am adequately consoled and comforted by the idea of the baked souffle. Once again, for me at least, it is a dish that hearkens back to childhood winter.

Don’t be fooled though, this is no mere sago pudding: the simple dessert has been topped with browned meringue and served with an ideal milk ice cream on the side. My suggestion would be to scoop the ice cream onto the dish, the gently pooling melting custard enhancing the creaminess of the pudding, the crispy meringue and sago pearls offering contrasting textures. 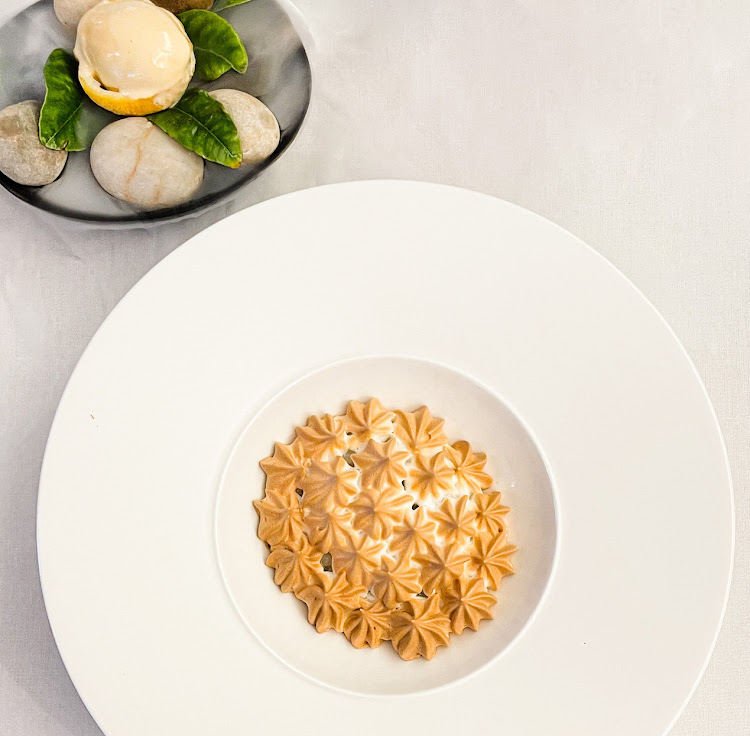 The meal comes to an end with a petit four of hertzoggie cookie macarons — a brilliant little mouthful — before leaving with a selection of biscuits, meringues, spices and a Basson recipe from the vintage kitchen cabinet, which acts as a functional showpiece in the restaurant’s entrance — packed with a selection of dried, pickling and curing produce, most of which will eventually make their way to the kitchen.

A superb addition to the Stellenbosch wineland’s dining scene. It’s fine without being stuffy; where it’s playful there’s a purpose, and above all it delivers punchy flavours through refined and elegant dishes along with a hefty dose of nostalgia to boot. Just brilliant! 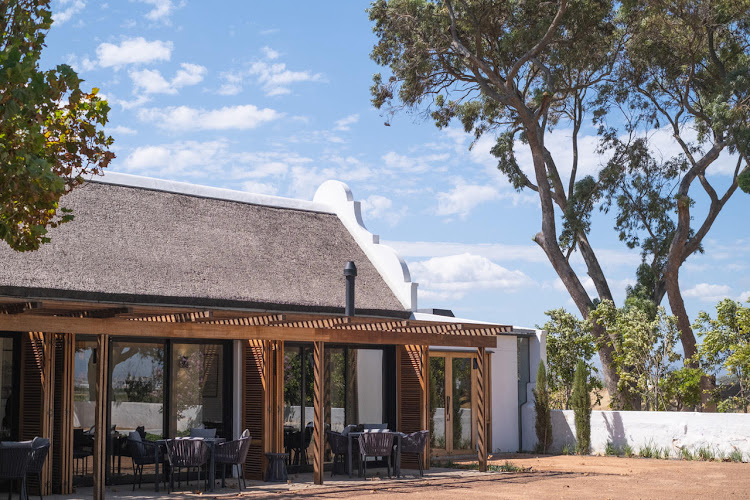 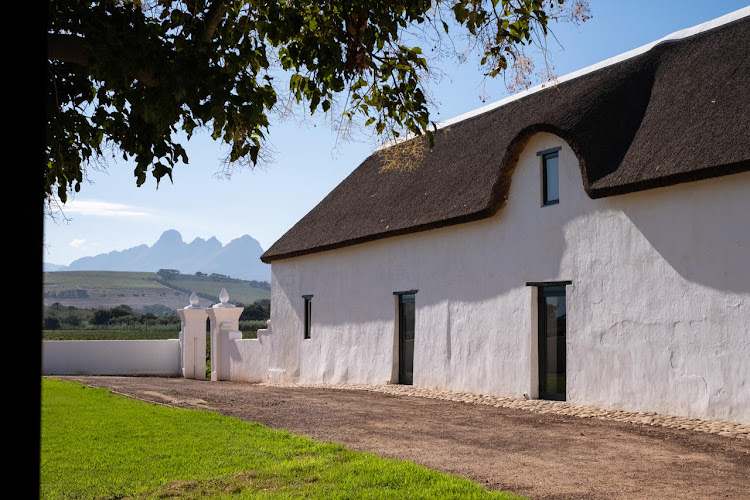 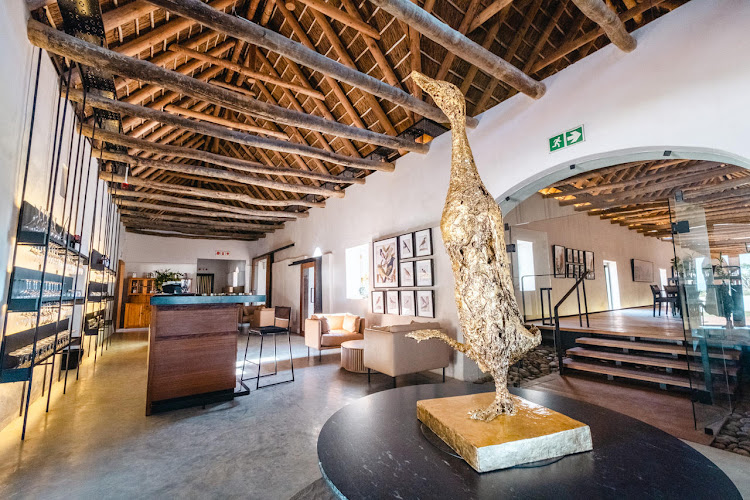 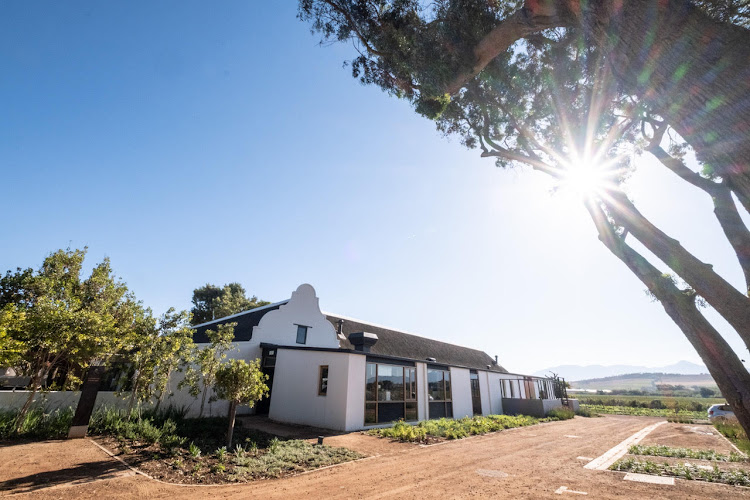 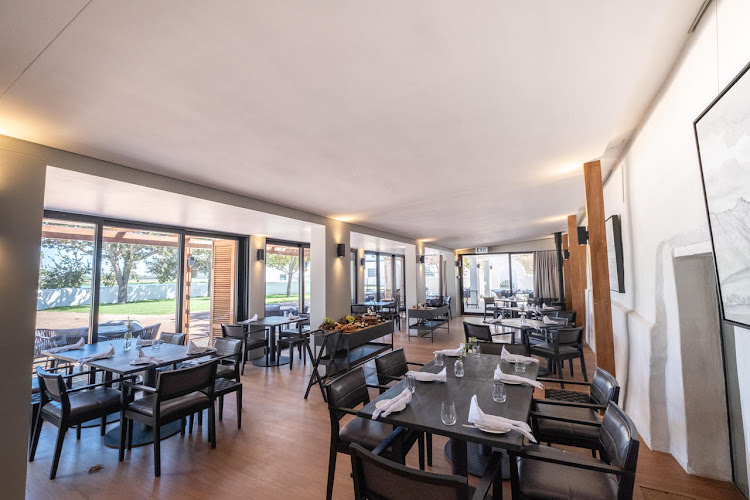 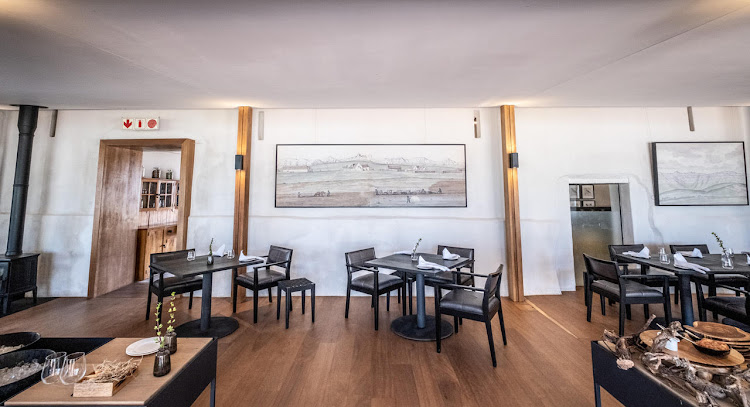 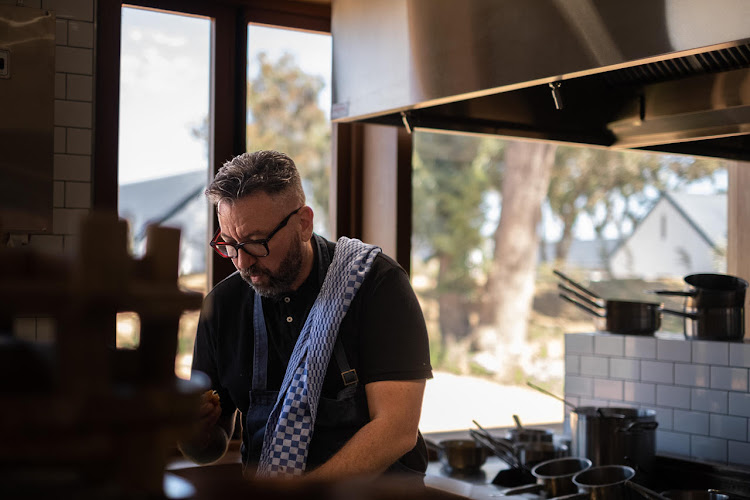 From luxurious Asian eateries and beautiful cocktail bars to a reinvented classic, reservations at these Joburg restaurants were a must-have in 2021
Food & Drink
7 months ago

No smoke and mirrors at this wine-farm restaurant, just top-notch cooking from Chef Ivor Jones and his team
Food & Drink
6 months ago
Next Article
Commenting is subject to our house rules.
© Wanted 2022 - If you would like to reproduce this article please email us.