Move over wallpaper, murals are back 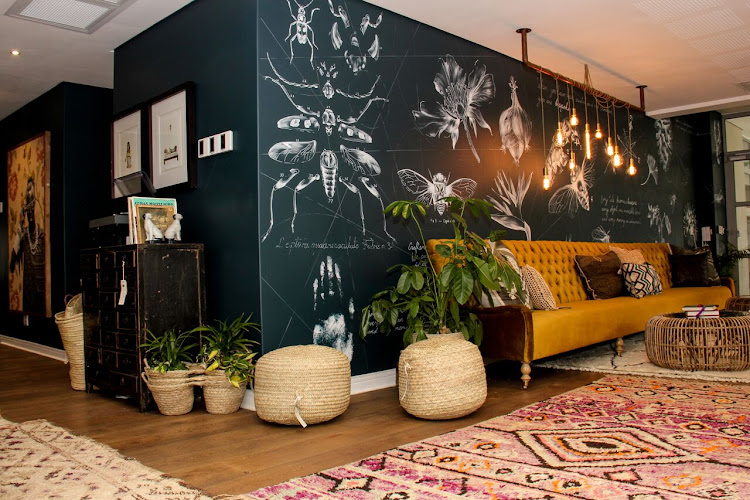 Perhaps it’s thanks to the return of craft - that longing for the handmade - but the increase in murals in public spaces is clear to see. Walls on streets, in clubs, bars, restaurants and even homes are becoming a canvas for the artist’s brush and we love it. Their ability to bring drama to a space, set the tone and carry brand identity is impressive and, unlike wallpaper, every mural is a one-off.

“The one big thing ceramic murals have going for them is their materiality. Glazed stoneware is immune to the elements and this results in these murals lasting for as long as the structure that they have been applied to,” says artist Michael Chandler of Chandler House.

FIVE OF OUR BEST 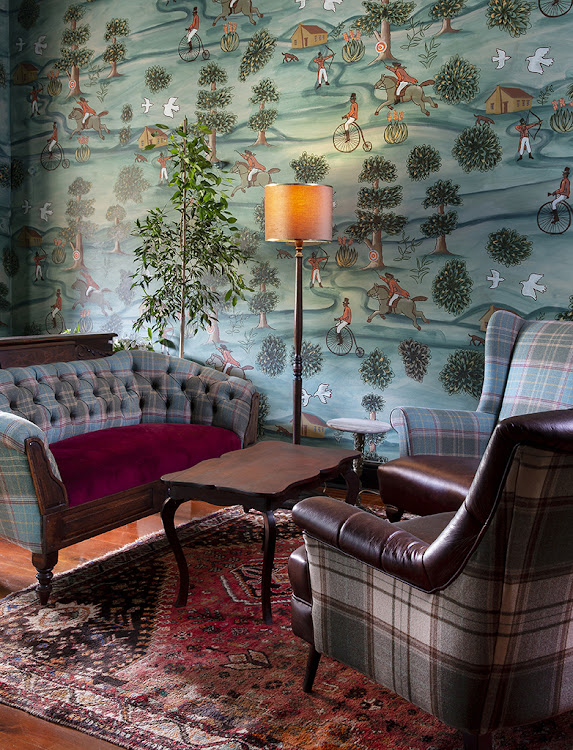 1. THE ATHLETIC CLUB AND SOCIAL

Cape Town’s cool new bar and restaurant in a historic 19th-century building features a rich mix of 1920s and ‘30s references, but its wall of athletes, executed in a playful and naïve style, is a showstopper. Painted by artist David Brits over three weeks onto a 40m² wall, the mural depicts an idyllic pre-apartheid countryside sports scene, complete with men on horseback, riding penny-farthings and shooting arrows.

“While the pattern is organic, it still has a rhythm to it,” Brits explains, adding the repeat in the pattern makes it look deceptively like wallpaper. The mural nods to the building’s sporting theme, which is a nod to the original 1900s owner Herbert Tothill’s love of sports.

The Storer’s head office in Johannesburg comes alive, thanks to a dark and dramatic wall featuring insect and plant anatomy, done by artist Lorne Schnugh. Briefed to create a scene reminiscent of a page from an explorer’s journal, the scene, done in PVA and permanent marker, references maps, botanical studies and handwritten notes, in keeping with The Storer’s brand identity of artisanal craft and exploration.

“Murals allow you to create an image that is completely unique and specific to the client and space, giving that space its own personality,” believes Schnugh. 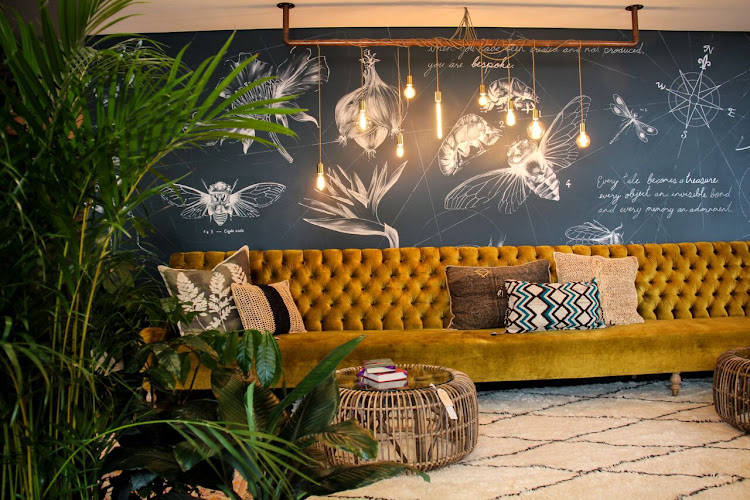 The wall closest to the entrance of Joburg’s Spanish-centric La Boqueria restaurant greets guests with a bold, large-scale mural of a torera (female bullfighter). The mural, painted in acrylics, was inspired by a tattoo and executed by interior designer Marlene Stroebel of Legends Design.

“The mural seems to have become part of the space and what it stands for. There is nowhere in the restaurant that you do not see it. It forms the backdrop of the whole place,” she says. 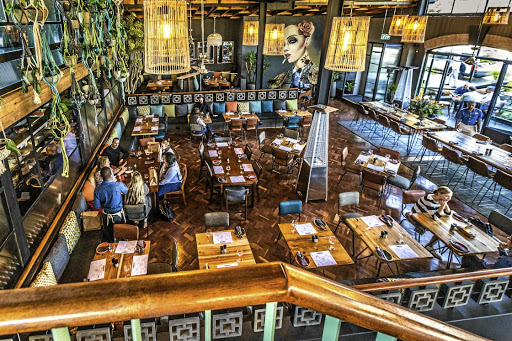 Artist Michael Chandler of Chandler House painted his extensive blue-and-white mural onto ceramic tiles, which have been installed on the back wall of a vegetable garden in Noordhoek, on the property where he was commissioned to do a mural for a small chapel. Combining birds, insects and abundant plant life, Chandler chose to use a lattice in this piece to demonstrate the union of man and nature, a fitting reference for its context. 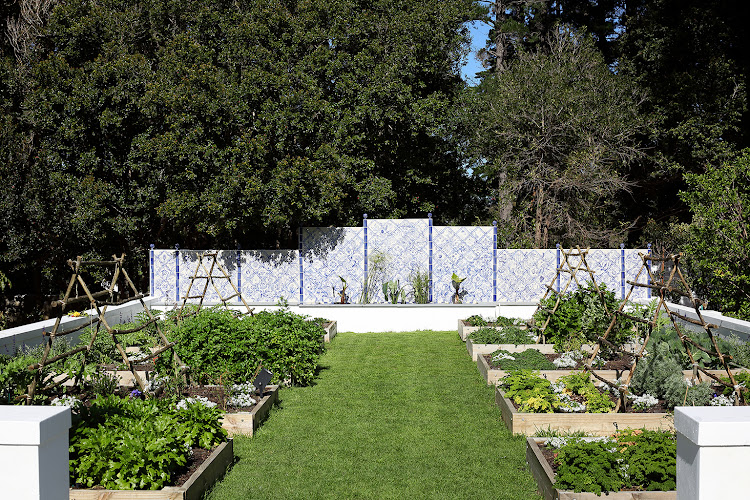 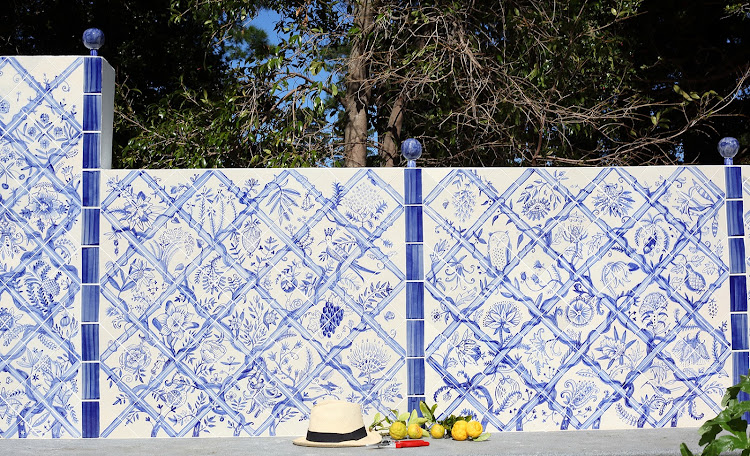 “The process is time-consuming and requires much planning,” notes Chandler describing his method of arranging the tiles in order, sketching out his image, painting the tiles with different intensities of colour, scratching into them to give texture, glazing and, finally, installing them.

The new Rosebank Mythos features two large walls with blue-and-white murals that tell the story of Troy, engaging customers and activating what would otherwise be dead space. Handpainted onto tiles by Elaine Jansen van Rensburg of Effects by Elaine, the mural is in keeping with the restaurant’s aim to celebrate Greek legends in all their new outlets. 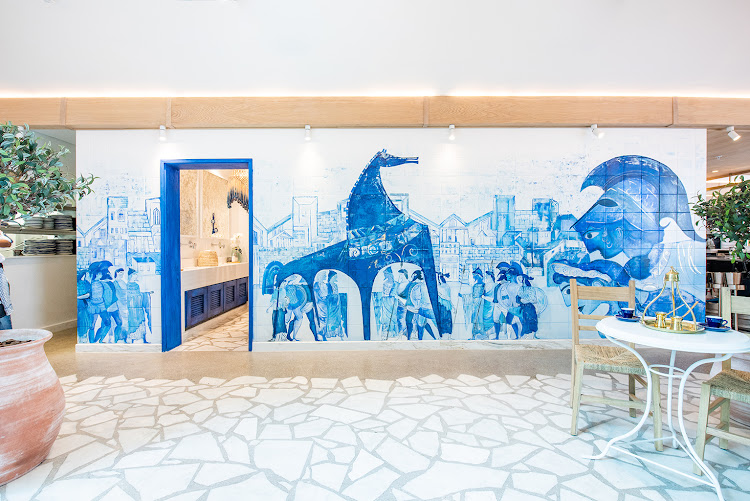 The hot new obsession of plant walls are growing on us

Living Green Walls is behind some of the most coveted vertical gardens in the country. We chat to director Sean O’Connor to get the lowdown on this ...
Fashion & Grooming
3 years ago

Co-owner Gazza Hollywood tells us about the inspiration behind his restaurant in Parktown North
Food & Drink
4 years ago
Next Article
Commenting is subject to our house rules.
© Wanted 2022 - If you would like to reproduce this article please email us.