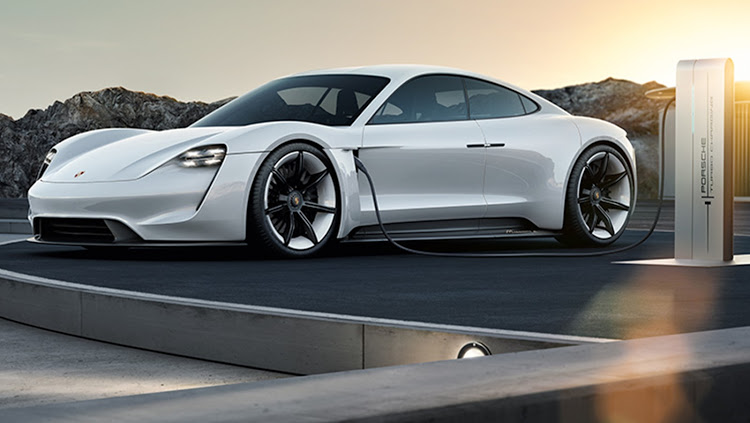 The Taycan can be charged to deliver 100km of range in just four minutes.
Image: Supplied

The first battery-electric Porsche will inspire a flood of new zero-emission sports cars when its full production begins late in 2019.

The first product of an astonishing €6bn investment programme between now and the end of 2022, the Taycan will be smaller than the current Panamera and will be priced between the big lift-back and the Cayenne SUV.

Porsche has already announced that the Taycan (pronounced “tie-can”) will be spun off into at least one other model (shown at this year’s Geneva motor show as the Audi Allroad-style Mission E Cross Turismo concept, but it will also be made in both all-wheel drive and rear-wheel drive).

Stefan Weckbach, head of battery-electric vehicles at Porsche outlines the company’s strategy and the progress on the Mission E
Cars, boats & planes
3 years ago

The Taycan will be built in right-hand drive from the start of production, and its design is faithful to the Mission E concept car, with the most notable change being the addition of a conventional B-pillar to improve its crash performance.

The Taycan has already reached its second level of pilot-build production in the same hall that produced the 918 Spyder, and Porsche has designed and built a new €700m facility, scattered around its bulging Zuffenhausen headquarters, to build it.

Due to reach the market in late 2019, the Taycan will compete not only with the Tesla Model S, but with the faster e-tron GT from sister brand Audi and Mercedes-Benz’s upcoming EQS, which will boast Benz’s first dedicated electric vehicle platform.

It has 300kW of charging power without hurting the battery, which you won’t find in our competitors

“We started this in 2014 and it opened up a new chapter in Porsche history. It’s a dream job and I don’t know if there’s anything like that in the rest of the industry,” the Taycan’s complete vehicle model Line director, Robert Meier, said.

“It’s not straight forward otherwise it wouldn’t have taken so long. The targets were: 0-100km/h in less than 3.5 seconds, 600 horsepower and more than 500km of range,” he said.

Meier insisted the Taycan’s handling would be sparkling, with a centre-of-gravity 80mm lower than the 911’s.

The Taycan battery runs at 800 volts rather than the industry-standard 400 volts; this allows for very fast charging capable of delivering 100km of range in just four minutes without compromising the battery life.

“It has 300kW of charging power without hurting the battery, which you won’t find in our competitors.

“We switched it to 800 volts because we have recognised that if you look at the charging power, it’s the limiting factor today.

“If you look at the time necessary to recharge 100km, it’s about 10 minutes today, but it will go down to eight minutes, but we will be down to four minutes. We want to drive fast and recharge fast.”

“There is still a lot of room for development in batteries,” Porsche’s board member for production and logistics, Albrecht Reimold, said.

There will also be an inductive charging system, though it will not be available from the launch of the Taycan. 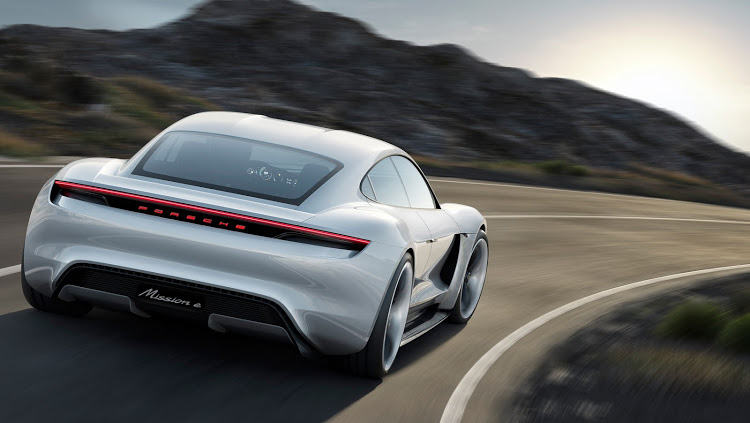 The low centre of gravity promises typically nimble Porsche handling, despite an estimated weight of around 2000kg.
Image: Supplied

Porsche will offer the Taycan in a range of power outputs peaking at 450kW for its initial run of production cars, with 300kW, 350kW and 400kW units set to follow.

It sends this performance to the wheels via a two-speed transmission (the e-tron, the Jaguar I-Pace and Tesla use single-speed units) and torque vectoring will be standard across the board.

It is shorter than it looks in photos, but will still stretch to about 4850mm long and 1990mm wide, making it almost 200mm shorter than the Panamera but 53mm wider.

The details are stunning and highlight Porsche’s obsession with keeping the Taycan’s centre of gravity low and its handling within Porsche’s normal specifications, despite an estimated weight of about 2,000kg.

The interior will be dominated by a huge, curved digital instrument cluster, developed from the Volkswagen Touareg’s Innovision infotainment screen.

Porsche is already believed to be well advanced with both coupe and convertible Taycan variants too, though there is no word on when the first of the extra body styles will arrive.

The company predicts that more than 50% of its models delivered from 2025 will be electrified.

The Boxster and the Cayman could turn into full battery-electric cars in their next generations, the company says, and hints that the Macan SUV — or an SUV just like it — could also be one of the Taycan follow-ups into the battery-electric vehicle world by 2022.

The classic 911 sports car will not be turned into a full battery-electric vehicle, but the next (992 series) 911 due to be unveiled next month will include petrol-electric hybrid models.

Aston Martin plugs into an electric future with the Rapide E

The E-Hybrid will be the cleanest Porsche Cayenne you can buy, if you remember to plug it in regularly
Cars, boats & planes
3 years ago