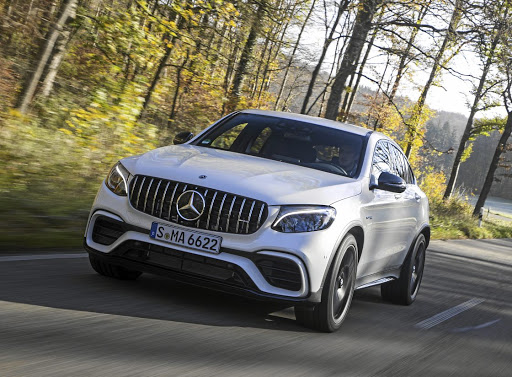 The Mercedes-AMG GLC63 coupe and its non-coupe sibling will pack some serious punch when they arrive in April
Image: Daimler

Remember that loud little guy who wanted to pick fights with everybody at school? Remember that he always seemed like he should be a rugby halfback? AMG has built that guy, but in SUV form. Unafraid, belligerent, seeking no friends and always so very loud, the GLC63 coupe is a weapon, transforming Benz’s calm GLC into something whose limits are best left to the experts.

The in-house 4.0l biturbo motor that started life in the GT is now in the smallest real SUV Mercedes-Benz makes.

Actually, it’s in two of them. The GLC and the GLC coupe are so close in size and weight that they might as well be considered one. They’re identical, more or less, below decks, with a new, supposedly swoopier body grafted onto the coupe version.

Still, it seems an unlikely host for 375kW of fury, given that it’s modest enough to be available with a humble 2.0l four-cylinder, but Benz loves a richer model mix, so here it is.

But is this the kind of car that a more environmentally conscious world needs? Either way, car companies have been warming up modest offerings for years by stuffing small cars full of big engines. The SUV surge made them inevitable torchbearers for the genre.

But "warm" is one thing. "Ouchie hot" is another thing altogether. This 700Nm version of the 4.0l V8 rips the GLC63 S 4Matic coupe to 100km/h so fast it would have been considered to be a proper supercar just a decade ago. At 3.7 seconds, it’s quicker than Porsche’s Cayenne Turbo and a BMW M3 to 100km/h. 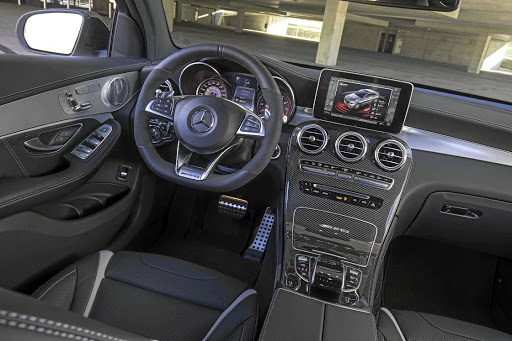 The interior has all the usual AMG touches
Image: Daimler

Of course, you could always just buy a C63 S and have similar straight-line performance and handling, instead of one or the other, but the GLC version has more luggage space and that currently coveted high-driving position at more or less the same money. It is much cheaper than the GLE63 too and smaller to park.

Although the price tag has not been settled, some of the good stuff will be extra, including the Dynamic Select system that adds Race and Sport+ to the ride, powertrain and handling modes.

There’s a standard version, too that’s missing a slice of horsepower so thin that it could be a rounding error, but the S is still 0.2sec faster to 100km/h and time is, after all, money.

The optional Race mode winds up the nine-speed automatic transmission’s AMG-spec clutch pack to help it launch, but because it rained when we had the car it didn’t need Race mode to light up the rubber and the skid-control light. We just built up some revs, sidestepped the clutch and let it have its head. Then we clung on. 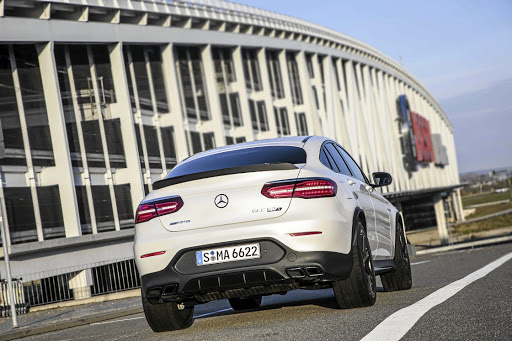 The S coupe is the real monster
Image: Supplied

And clung on. And clung on some more. The GLC63 S didn’t seem to notice the hard, driving rain on its straight-line sprints. It bellowed and roared and just kept getting faster and louder.

It’s deep and angry when it fires up in the default Comfort mode, but it gets even more upset when you stab the pedal and downright furious if you combine that with a piece of blacktop.

Its first gear ratio is an astonishingly low 5.35:1 and it’s only ever used fleetingly. It snaps you back in the seat and the clean launch, with virtually no wheel chirp much less spin, turns every one of those engine revs into straight-line speed.

There’s an electronically locking diff on the rear axle and the hang-on rear diff takes 69% of the torque under normal conditions, but the centre diff can swing around to shoot half of it up front, where an open diff does its best.

And it does it loudly and you’ll never confuse the engine note with a sugary-sweet V8 or V10 from the preturbo days. This one is all muscle and fury and that bear in The Revenant (before it gets killed, obviously), plus pops and crackles on the overrun and downshifts that would put a four-barrel Holley to shame. 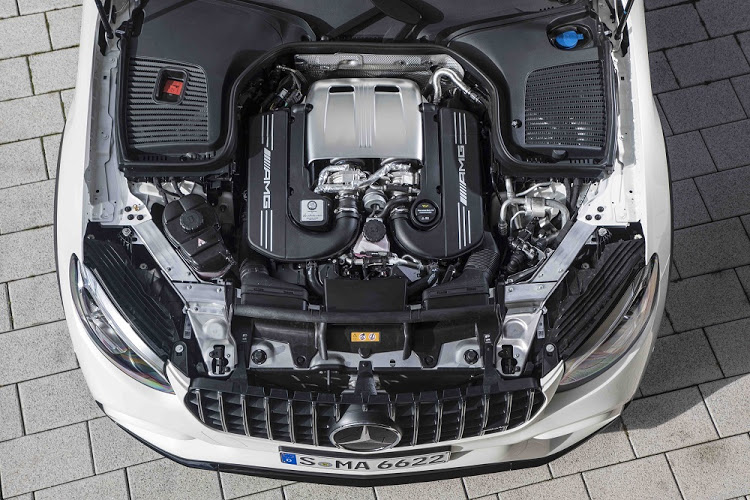 The engine on the S version punches out 375kW and 700Nm
Image: Daimler

The shifts snap cleanly and quickly, though the jolt goes from zero in Comfort mode to oh-there-it-is in Sport and just keeps going until the exaggerated thumps of Race mode. It’s also so ridiculously clever in Sport and Sport+ that you’re better off forgetting about the paddle shifters and just letting it do it all for you.

Besides borrowing the engine from the armada of AMG models, the GLC63 S coupe also borrows heavily from their suspension features. It scores a three-chamber air spring system, active damping, more negative camber and a four-link front end with unique steering knuckles. The rear end steals heavily from the E63 S’s five-link rear end architecture and wheel bearings sit further out than the standard Merc version.

A cold, wet road test on squishy winter tires isn’t conclusive, but it does leave some questions to answer once the ball of fire is finally here in April. Does it handle? We’re not absolutely sure. There’s plenty of grip even when you start throwing it around, but its weight means it doesn’t wash the same calm sense of assurance over the driver that a Macan Turbo does.

It was also difficult to feel truly at one with in the bends and its skid-control systems chimed in so hard, so early, that it must have felt the same lack of power-down confidence we did. Or the conditions were just that bad. It improved in Sport and Sport+ modes, where the skid-control let the car slide just a little on the way out of corners. At least half the problem in the winding, saturated roads we had was that there is just such a broad range of ferocious thump from the V8 even at half throttle that it’s giving everything, almost all the time.

That’s going to be a lot less critical on dry roads and less critical again on faster, open bends where the SUV felt tremendously stable, with its nicely weighted steering making it easy to point and the effortless power always at the ready.

It’s also quiet when it’s cruising and the ride is relaxed enough in its Comfort setting to be an everyday car.

There is the usual luxurious array of AMG leather work draping the cabin.

So, maybe it doesn’t go around corners like a Macan Turbo. And maybe it does, when we get it on the right tyres and it’s not raining and a few degrees above freezing. But we do know this: it sure flings you out of corners in a hurry. And just keeps flinging you.

The Velar is arguably the most advanced in the Range Rover line-up, writes Lerato Matebese
Cars, boats & planes
4 years ago