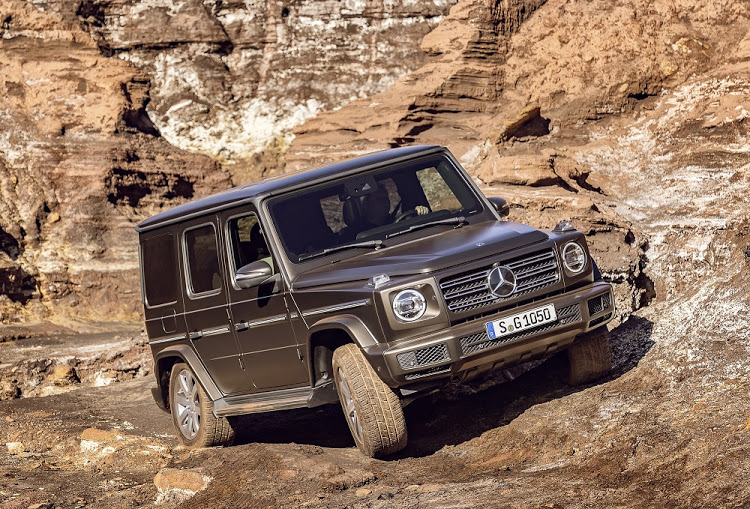 There’s the Range Rover and then there’s this, the second full generation of the Mercedes-Benz Gelandewagen, now called G-Class to fit in with Benz’s streamlined modern names.

The second G-Wagen hit the Detroit Motor Show this week, with Benz saving everybody 39 years of the original’s evolution by skipping straight past the military versions, hose-out interiors and small engines and into high-end luxury.

Mercedes’s G-Wagon SUV is about to go soft, but only on the inside, writes Michael Taylor
Cars, boats & planes
4 years ago

Just five parts have been carried over from the original 1979 G-Wagen, the most significant of which is the windscreen-washer nozzle and the most obvious of which is the door handles’ plastic cover.

Benz already has two gigantic SUVs, including the GLS, but can’t help feeling threatened by two Bentleys (the Bentayga and the even larger upcoming Falcon), the Lamborghini Urus, Audi’s upcoming Q8 and BMW’s X7, along with a long-wheelbase version at the top end of the Range Rover family. 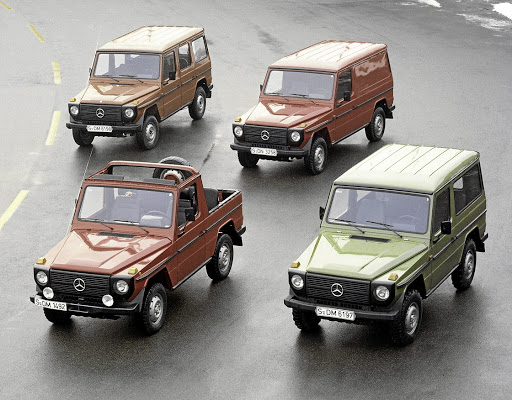 The G-Wagen has been around in various military and civilian guises since 1979
Image: Mercedes-Benz

A spokesperson for Mercedes-Benz SA told Motor News we can expect confirmation of models and arrival dates later in 2018.

Unlike most modern SUVs, the G-Class will retain a full ladder-frame chassis beneath its two-box body style, which promises extreme off-road ability to go with its S-Class-derived interior equipment levels and its 170kg diet.

Benz has made a point of keeping the low-range transfer case and three locking differentials, with the entire dash layout centred on their operating buttons and promises of even more wheel travel and off-road grip.

"The new G-Class is setting the bar higher still in all relevant areas, in terms of performance on and off the road and with regard to comfort and telematics," Mercedes-Benz’s board member for research and development Ola Källenius says.

"Our longest-serving model series is therefore ideally equipped to continue its success story. In short, the new G is still a G, only better."

For everything that’s new and better mannered about the G-Class, the G500 is priced at about the same level as the outgoing version in its native Germany (well, it’s put together by contract manufacturer Magna Steyr in Graz, Austria, but it’s close), although whether we can expect a similar pricing situation in SA remains to be seen.

Despite its body styling looking almost like a scale model of the original, it is 53mm longer and 121mm wider, giving it a more substantial footprint and a far bigger interior. In spite of a double wishbone front suspension layout (bolted directly to the ladder frame), it has 270mm of ground clearance and it adds 10mm to its maximum wading depth, pushing it up to 700mm.

It picks up a single degree more ability in some key areas, including the approach (31°), break-over (26°) and departure (30°) angles, while Benz insists it’s stable at a 35° tilt angle.

While it picked up a strut-tower brace to stiffen the front end in the move to an independent front suspension, the G-Class retains its solid rear axle, albeit with trailing arms and a Panhard rod. Benz calculates that should give it 82mm of upward jounce and 142mm of droop, along with 241mm of ground clearance to the bottom of the diff casing. 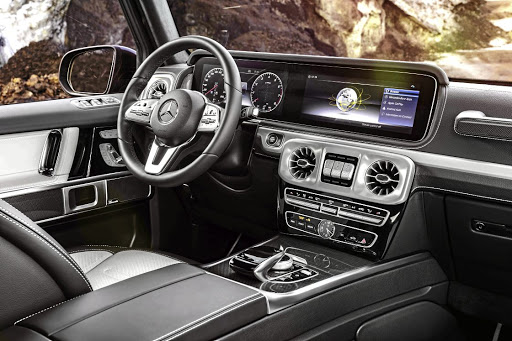 The interior goes all luxury with tech from the E and S-Class but with a G-Class slant.
Image: Mercedes-Benz

It reaches its toughest off-road settings when it’s switched into its G-Mode, which it automatically pops into as soon as any of the diff locks or low-range have been engaged, assuming there’s dirty work afoot. G-Mode is a map that softens off the throttle response and moves the adjustable damping and steering to more off-road friendly settings and avoids gearshifts.

While there’s a standard steel spring, Benz believes the majority of V8-powered G500s will ride atop the optional adaptive damping system. It’s a system that delivers five driving modes, including Desert, Comfort, Eco, Sport, the customisable Individual and an Off-road mode.

Those abilities should be helped by an electronic architecture that brings the car into line with contemporary norms, delivering Benz’s full array of driver-assistance systems.

Its new electromechanical rack-and-pinion steering system should be a step forward over the ancient recirculating-ball system fitted to the outgoing car and will allow Benz to give it Parking Assist to self-steer into parallel and 90° parks.

It also has three in-built steering feel-and-feedback programmes, much like most premium-car powertrain systems, and will switch on demand between Comfort, Sport and Off-Road parameters.

Another off-road trick will be its use of its 360° surround cameras, which have been tightened and boosted in resolution to turn them into off-road cameras for tricky conditions.

Benz will slot a wide range of powertrains beneath the G-Class’s nose, including V8 and V12 twin-turbo power from AMG, but it will start out with the G500 with a 4.0l biturbo V8 and the 9G-Tronic nine-speed auto transmission. The smallest engine planned for the range is a 2.9l six-cylinder, with Benz admitting it has no plans to fit it with a four-cylinder engine of any kind.

Even with aluminium replacing many of the steel body panels, it can still carry a 150kg dynamic roof load (for driving) or a 300kg static load (for camping) on its roof.

Inside, it will carry over much of the S-and E-Class interior electronics and equipment, though it has a lot of its own design language now. 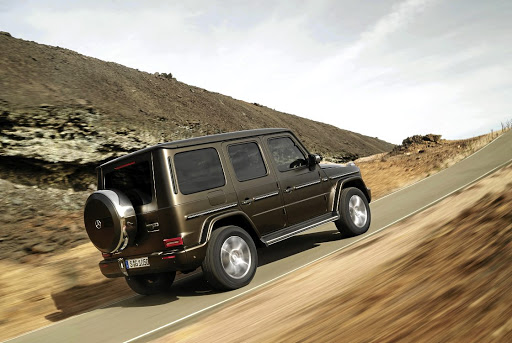 Almost all of the G-Class’s visible buttons are metallic, though there are far fewer of them than in its predecessor to deliver a cleaner interior. It retains its signature short dash, barely intruding into the cabin.

All its metal vents are square and will not be seen in any other production Mercedes-Benz until they’re used to link it with the 2019 GLB junior off-roader, but otherwise the links to the top end of the family limousine business are unmistakable.

Almost every interior dimension has grown, with 150mm more rear legroom, while even the driver and front passengers score a 38mm boost in legroom. There’s an extra 38mm of shoulder room in the front (27mm in the rear) and 68mm more front elbow room (56mm in the rear). The hip point for the driver rises 10mm, benefiting also from a 40mm stretch to 1,500mm between the hip point to the front axle.

While the legroom has been boosted in the back, the G-Class also has a selection of three rake angles for the rear seat’s backrest to maximise either luggage space or comfort. Cargo space has risen, but Benz won’t yet say by how much.

It will have three trim levels, ranging from SR1 and SR2 up to the AMG line, with hand-stitched seats and steering wheel. There will be clips on the back of the front seats for entertainment tablets, along with a large glass sunroof. There will also be USB connections in the front and the back and the steering wheel will adopt both the controls for the cruise control and the track pads for the instrument cluster.

So unlike the rumours, the G-Class is alive and well and looks likely to continue to be an icon not just for off-roaders but for the urban style set too when the AMG versions arrive.

But Mercedes is not done with breathing new life into its G-Class, because as you will read elsewhere in this issue, the company is working on the G-Class’s offspring, the A-Class based GLB.

Volvo delivers a practical SUV with plenty of upmarket appeal

The plans to thrust Volvo into the mainstream start with the XC40, and it’s very, very good, says Michael Taylor
Cars, boats & planes
4 years ago