Stanislaw Trzebinski's emotive pieces beg a bigger question: will we tame ourselves and our use of technology before it’s too late? 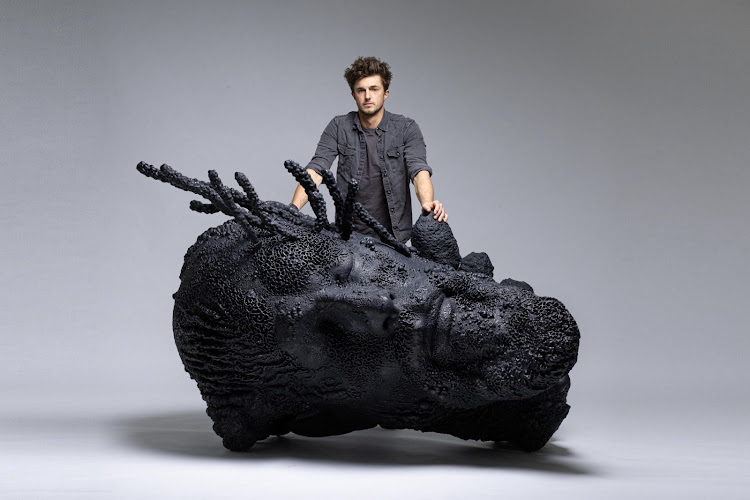 The arms are spread-eagled, with remnants of earth, or perhaps trailing spirits, hanging from them — an image like Christ on the cross, disconsolate but unbowed.

This is Ortus, the signature bronze of Cape Town-based sculptor Stanislaw Trzebinski. I’ve seen a small selection of Trzebinski’s oeuvre before, most memorably at Ebony/Curated in Franschhoek, where Ortus stood in 3m-tall glory guarding the entrance to the gallery’s flagship premises. 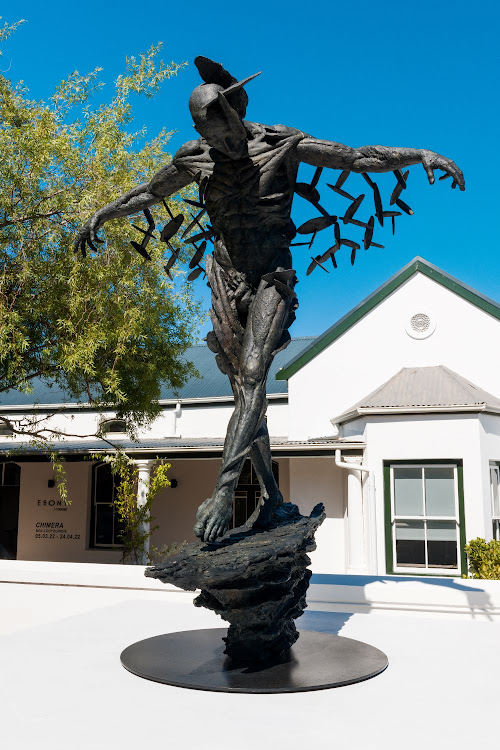 Ortus is Latin for “a dawning, a rising”. It can also mean “the source”. Wanting to see more of his work and the place of its genesis, I visit Trzebinski’s studio, located in the creative hub of lower Woodstock.

Though not immediately visible on entering, on seeing Goliath it dominates the floor space — a monolithic centrepiece, an intricate spiral of coral-like patterns forming the human head of the slain, fallen giant. It conveys a sense of impending doom, and the coral is a deliberate motif. Nature and the ocean are themes Trzebinski explores in his works, as well as the idea of the interconnectedness of everything in our world, and the cosmos. 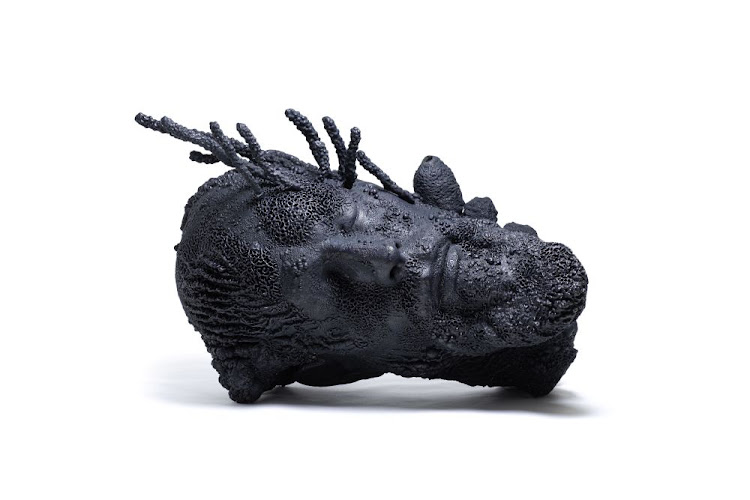 Trzebinski, it turns out, is something of an eco-warrior. If What Have We Done is a broad comment, a moving, meditative piece on the state of the world, Ashen — also covered in a representation of coral — is a sombre piece conveying grief for the loss of marine ecosystems. The Coral Column Woman series is simultaneously beautiful and upsetting, the figure appearing half-gnawed, alive but mangled by man’s greed, a reminder that life came from the sea and a warning that this elemental life force is fast being eroded.

Much of Trzebinski’s work is tied back to his childhood experiences, in particular as a commentary on the despoliation of nature, “the dissociation of the human condition from the natural world. My child will not have the childhood I had”, he says, a pithy summation of the effects of man-made climate change and rapacious capitalism. 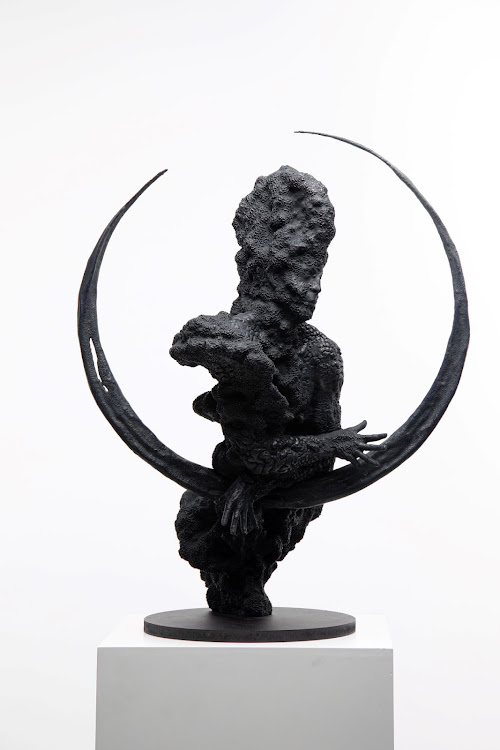 Man on the Moon.
Image: Supplied

His sculptures prompt us to reflect on celestial systems, too. Man on the Moon and its female counterpart referencing the star, Proxima, allude to the powerful forces at play in the universe, and how insignificant, infinitesimal, we are in the context of the cosmos. Nevertheless, we are interfering with these systems, space now being a playground for billionaires, a planned superpower battlefield and the new frontier for mining exploration. “Is there is a price to be paid for this hubris?” these two works seem to ask.

In ancient times people had a deep respect for nature, underscored in Roman, Greek and Norse mythology. Many of Trzebinski’s pieces reference this connection, having the demeanour of appalled deities. Some are modelled explicitly, like Poseidon, the god of the sea now reduced to near blindness, disembodied, clutching at his back in distraught pose. Others are more allusive, like the perfect, whole-bodied Faith, her arms extended as if surveying a creation, who could be Artemis, the Greek goddess of nature, looking down at mankind with bemusement.

More obliquely, Harmonia — skeletal but powerful and intent — reminds me of the Furies in Greek mythology, the winged goddesses of justice who sought vengeance in particular for family crimes. What price will we pay for our crimes against Mother Earth? 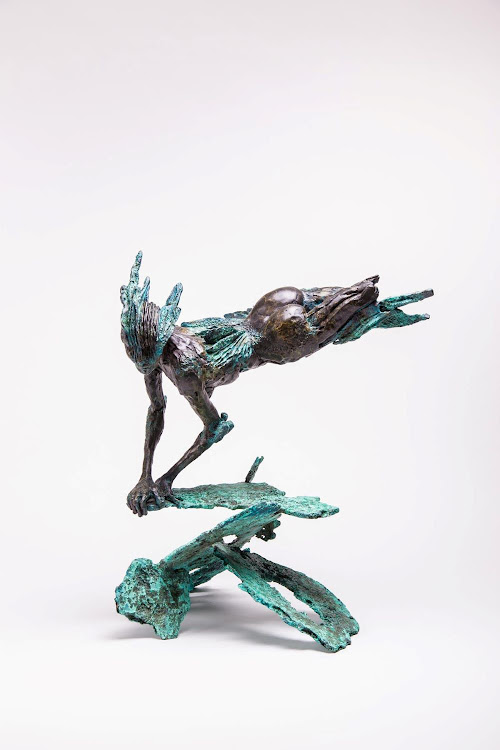 Many of Trzebinski’s creations are melancholic, a sentiment emanating from the fragmented, shard-like textures or dismembered segments indicating a composite that is falling apart. Some have a degree of serenity, but unlike the conventionally elegant or beautiful forms of Keith Calder which often depict graceful movement and have names such as Jeté, Rapture, and Duality, Trzebinski’s pieces are provocative and challenging. Where Calder offers soulfulness and solace, Trzebinski chastises and warns of impending catastrophe. 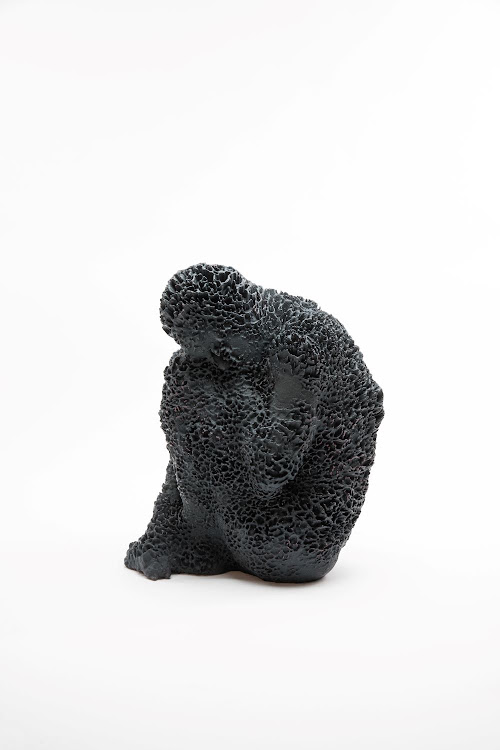 Though his work focuses tightly on this theme, it is rich in contrasts. Movement, muscularity and dynamism are juxtaposed with hibernation or contemplative postures; ephemeral appendages or platelet-like protrusions signify either new growth and the body’s regenerative ability, or its disintegration; the gods appear as forsaken and unamused, but still vigilant — as if, being immortal, they are scornful of our ego and hubris. And in many pieces it is the negative space that demands attention. What’s missing conveys everything about the fragility of even the most powerful human bodies.

Variations are also apparent in the sculptor’s use of textures and techniques. Rough, coral-like surfaces are offset against smoother, polished bronze; colourisation taints are balanced with raw metal; deliberate tool marks and jagged edges mimic the human infringement upon the purity of natural elements. 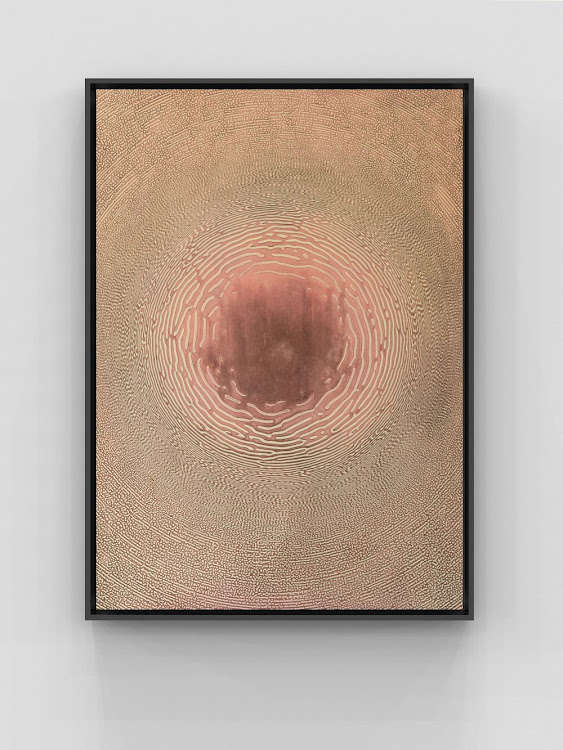 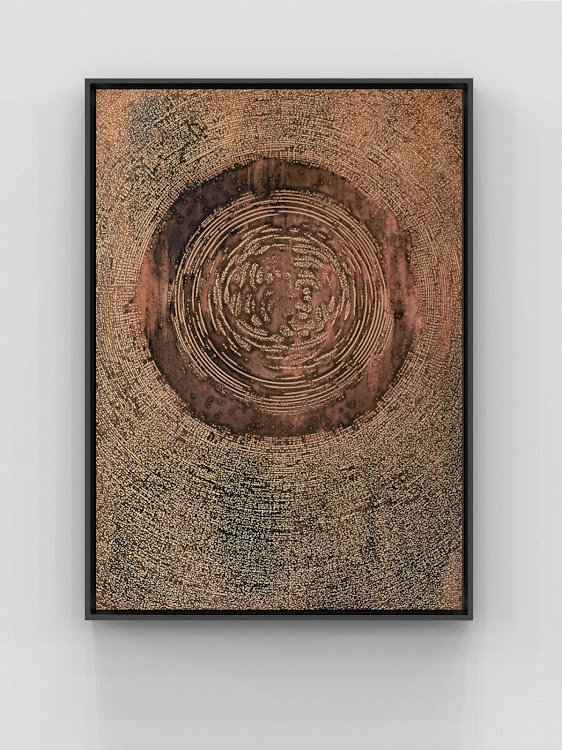 Trzebinski has also been experimenting for a few years with etchings on copper- or brass-epoxied substrata. Resonance and Inception are ethereal, hazy, mysteriously exquisite. Here, his creative process is to allow the patina film to set randomly in its own form of alchemy. He knows precisely how he wants his sculptures to appear, but he’s content to leave the metamorphosis of these concepts in the lap of the gods.

On one last circuit of the studio, it’s striking how prolific Trzebinski has been. The space is packed with finished figures and multiple works-in-progress, evidence of his energy and commitment to getting his message across. Somehow, until now I’ve missed The 11th Hour. The subject sits cross-legged contemplating an ankh, the ancient Egyptian hieroglyphic word-symbol for “life” or “nurturing”; he could be pondering solutions, but the facial expression betrays anger in knowing that the forces of Fate have already been pushed too far. 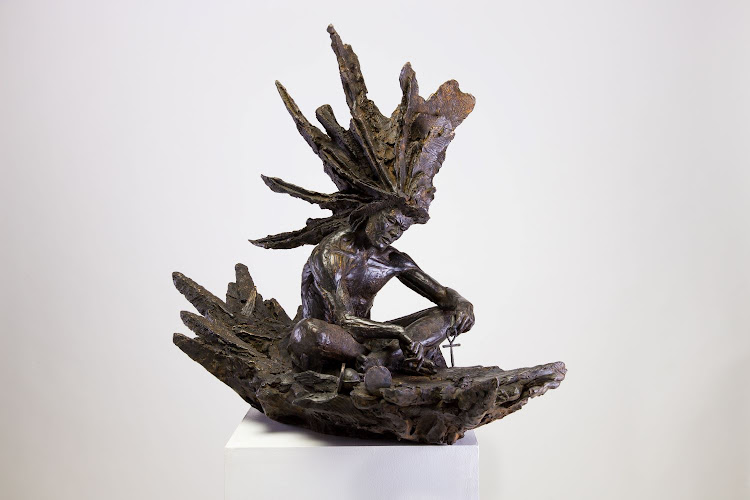 As if by tacit agreement, Trzebinski and I shift the discussion to the lighter topic of a more innocent age and the masters from bygone centuries, the Renaissance in particular. He admits to being blown away by, among others, Bernini. “To sculpt in marble! The amount of skill involved in getting that medium to the finish he achieved, with the tools he had at the time … there was no room for error.”

Technology always advances. Sculptors in the future will wonder at the primitiveness of techniques used today. “Artists use the technology available to them at the time. So 3D printing, for example, that will become a normal part of creating sculpture,” Trzebinski believes.

His emotive pieces beg a bigger question: will we tame ourselves and our use of technology before it’s too late?

Joni Brenner's solo exhibition at SMAC Gallery is beautifully considered and presented; a rare level of quality and insight in the local art scene
Art & Design
1 month ago

Visit these group shows, collaborative efforts and solo exhibitions of emerging, established and iconic SA artists
Art & Design
2 months ago
Next Article
Commenting is subject to our house rules.
© Wanted 2022 - If you would like to reproduce this article please email us.