Go on a marine adventure with Tintswalo at Boulders 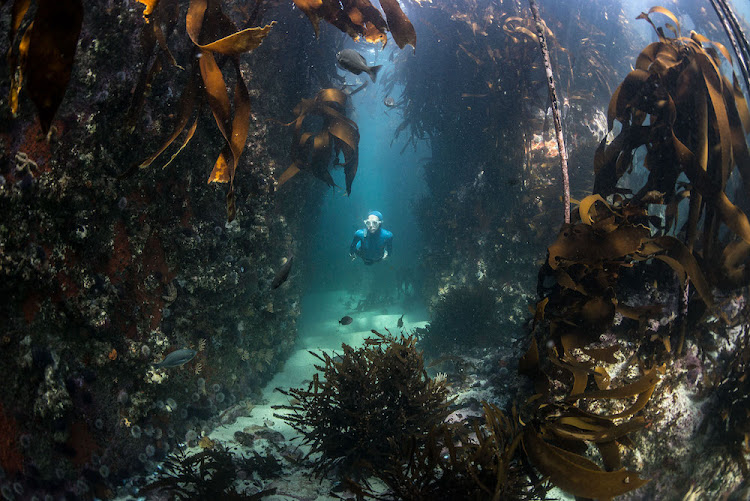 It’s been quite a week for the filmmakers behind My Octopus Teacher, the streaming smash-hit of 2020. After bagging the Bafta Award for Best Documentary earlier in April, on Sunday night they followed it up by winning the Oscar for Best Documentary at the 2021 Academy Awards. The pair of awards, and the fascination with the documentary about one man and his experience befriending a wild octopus, has turned the gaze of millions towards the clear-blue waters of False Bay in the southern reaches of Cape Town.

And, as viewers discovered in the groundbreaking documentary, it’s certainly a glorious corner of the Cape Peninsula. Granite boulders and waving kelp forests, quiet coves and sparkling blue water that is, by Cape Town standards at least, something approaching warm.

That didn’t stop me donning the thick 5mm wetsuit handed to me by Jon Monsoon, guide and conservationist with Shark Warrior Adventures. We were standing above the beach at Seaforth, a quiet slip of sand only slightly overshadowed by the brutalist architecture of the neighbouring navy base, one bright autumn morning.

My free-diving teacher: Explore kelp forest, learn about the ocean with Hanli Prinsloo

Along with a handful of other neoprene-clad snorkellers, I was suiting up to seek out my own transformative underwater experience. Would I befriend and mourn the death of my own cephalopod BFF? Unlikely, but I was hoping for a glimpse of filmmaker Craig Foster’s underwater world. And I wasn’t disappointed.

Just metres from the beach an inquisitive Cape bream came to investigate the ungainly visitors to his ’hood. A few kicks of the fins further on, a Barehead goby lay camouflaged on the sandy bed, surrounded by a battlement of colourful sea urchins. Farther out, vast shoals of strepies shimmered in the sunlight filtering through the fronds of kelp.

Finning along the surface, huffing through my snorkel, I was certainly no Craig Foster — for that, sign up for the free-diving courses Hanli Prinsloo runs in these waters — but the experience was nothing short of hypnotising.

At one point, our small group was so mesmerised by the kelp forest it took a moment to notice the huge short-tailed stingray that floated along the seabed below. Sadly, the octopus stars of the show were shy, and an hour later we stumbled out of the water smiling, but without our own cephalopod tale to tell.

I was dipping my toe into Foster’s underwater world as part of the three-day marine adventure experience run by Tintswalo at Boulders, a luxury lodge that rests on the mountainside just above Boulders beach. As locations go, the lodge is hard to beat. It’s set high enough to ensure panoramic coastal views, yet close enough to let the braying of African penguins wake you gently in the morning.

The lodge offers nine suites, each named for notable ships that have sailed these waters through history, but it’s the top-floor suites, with a private terrace and endless sea views, that are the best in the house. Down below, airy lounges and quiet patios offer more ocean vistas, and plenty of nooks for relaxing indoors.

But you’ll want to spend your days outside, and the marine adventure package offers plenty of time on, in and near the ocean. 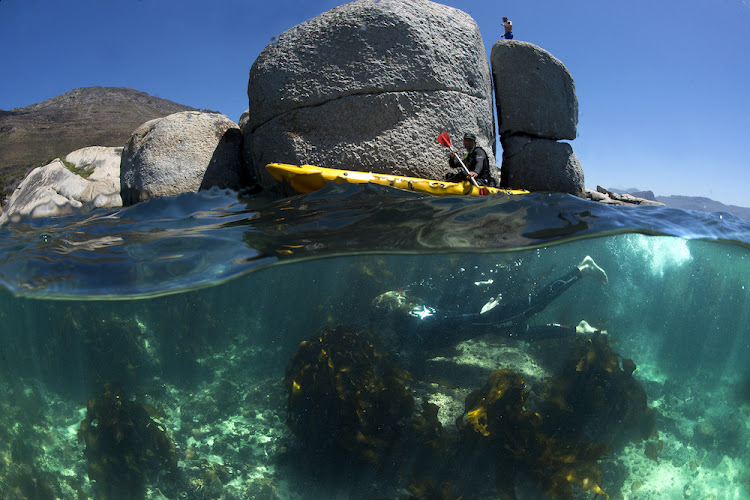 Snorkelling aside, another highlight of this seaside short-break is the two-hour kayak excursion. Paddling south from Seaforth towards Windmill Beach, another sandy cove popular with savvy locals, our stable double-kayaks slid easily over the blue waters of False Bay.

From above it’s a bird’s eye-view into the kelp forest below, as blades of sunshine light up the seabed. I kept a keen eye out for the Cape clawless otters that often pay the kayaks a visit, as penguins flashed past underwater en route to the fishing grounds offshore.

The Boulders colony is home to a few thousand endangered African penguins, and we end the afternoon exploring the colony, and learning about this delicate coastal ecosystem. With their chorus of braying the soundtrack to sundowners on the lodge terrace that evening; it was easy to remember that malodorous sonorous residents have long been the star attraction here. Long before any octopus stole the limelight.

• For more information on the Marine Adventure Experience, and discounted rates for local residents, visit tintswalo.com/boulders/villa.

There’s a lot to love about this secluded luxury villa that’s just opened in the Western Cape, writes Richard Holmes
Travel
1 year ago

Down by the river: Five riverside escapes that are perfect for autumn adventures

Just because summer is coming to an end doesn’t mean you can’t still enjoy an idyllic waterside holiday. Go here ...
Travel
1 year ago
Next Article
© Wanted 2022 - If you would like to reproduce this article please email us.