From Swabian-inspired Maultaschen to vegan Korean soul food, Berlin provides a steady and succulent stream of domestic and international eats 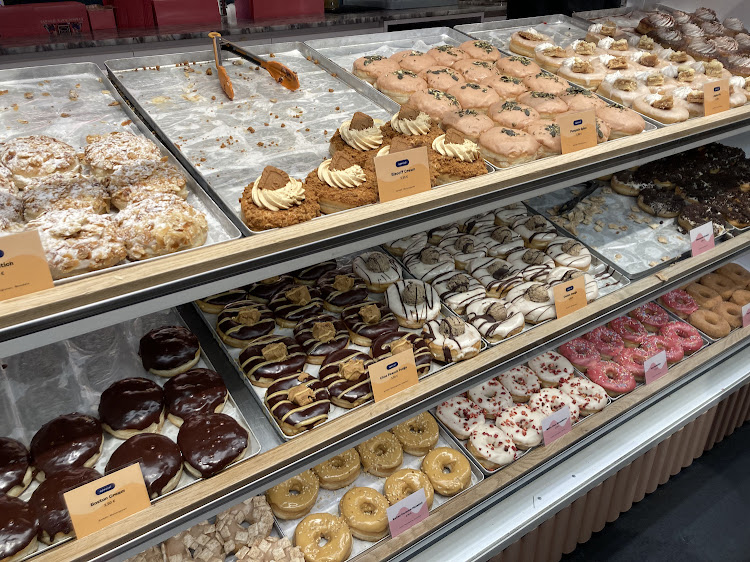 A dazzling array of vegan donuts at the Brammibal’s outlet near Alexanderplatz in the Mitte district.
Image: Supplied

I knew Munich was my kind of town when the German, my partner and playmate, asked a question of a woman standing in line at a restaurant for which we were queueing and she responded, “I’m sorry, but I don’t speak German.” In a recent five-day jaunt charging around the country’s capital, I discovered that they don’t speak German even more over there.

Berlin is a city that wildly excited me on my previous visits in 2010 and 2016. This time, armed with a bit more than the language basics but still a decidedly cat-sat-on-the-mat style of discourse, I found myself rattling off my coffee and ice cream orders with the sort of elan I could have only dreamed about five years ago, to be faced in most instances with completely nonplussed stares.

“I’d prefer if we speak in English,” piped up the French lass behind the counter at Coffee Drink Your Monkey. “Not a word,” was the response of one of her countrymen when I asked him how much German he speaks at work at Brammibal’s, a few days earlier. “If you can make coffee, you can work anywhere in Berlin.”

From Mozambique and Reunion to Puglia and Cognac: Where to in 2022?

From bucket-list expeditions to short tropical breaks, try these trips on for size
Travel
6 months ago

Non-German speakers from the rest of the world are well represented in Berlin too. At Benedict in Wilmersdorf, where a daily bunfight occurs to get one’s paws on some shakshuka and pancakes, we met Nitzan from a village near Tel Aviv. It was a Friday and challahs (kitka breads) of multiple shapes and sizes were piled high on the bakery counter. This 24-hours a day/seven days a week breakfast-only eatery is the only outpost outside Israel.

Nitzan’s co-workers included Michael from Milan, Itchi from Tokyo and Chi from Johannesburg. Michael and Chi were both university students and Itchi was on a break from his job as an investigator at a criminal law firm. 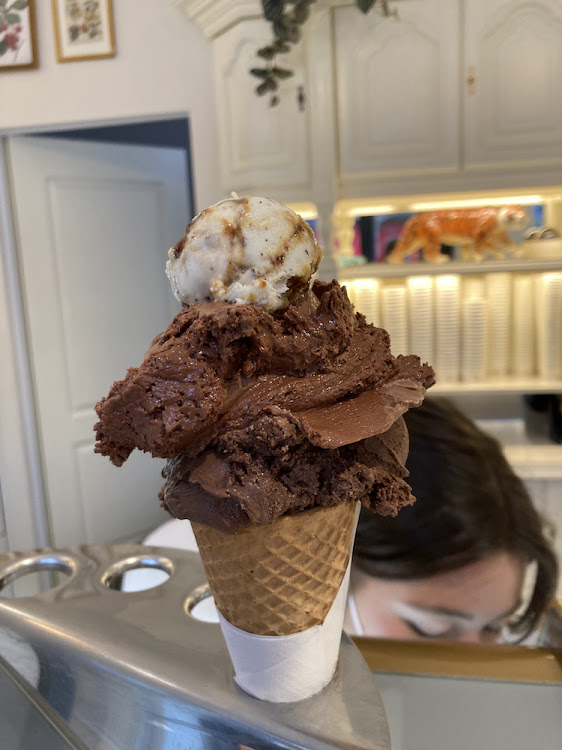 The chocolate sorbet to end all chocolate sorbets sandwiched between Valrhona 70� “French” chocolate on the bottom and a blob of poppy seed, marzipan and caramelised fig ice cream on top at Hokey Pokey.
Image: Supplied

Across town, Lukas, Polish and expert in dough-slinging after a multiple-year apprenticeship in London, has become one of the city’s go-to creators of Neapolitan-style pizza. He developed his local standing at Zola, which opened in 2015 in the uberhip neighbourhood of Kreuzberg, and now he’s continuing the wizardry at W Pizza in nearby and slightly less gritty Neukölln.

Expanding on his repertoire, he’s working on a bakery concept with breads and rolls made exclusively from flours such as hemp, crediting his recent 25kg weight loss to cutting out gluten.

Despite its reputation as a “meat-prone” country, as the German puts it, vegan eateries abound in Berlin with everything from Korean soups and sushi rolls to a chain of doughnut shops that dot each neighbourhood.

At Jones in Schöneberg, Piedmont hazelnut and chocolate cake are but a couple of the vegan options. But this must be one of the only ice cream parlours I’ve encountered where the cones are better than what’s in them. At Hokey Pokey, started by a former five-star hotel pastry chef, the Valrhona Guanaja 70% sorbet could give any chocolate gelato in Italy a serious run for its money. Hokey Pokey’s first store in Prenzlauer Berg had to close temporarily when out of control lines of customers caused a storm with its residential neighbours. 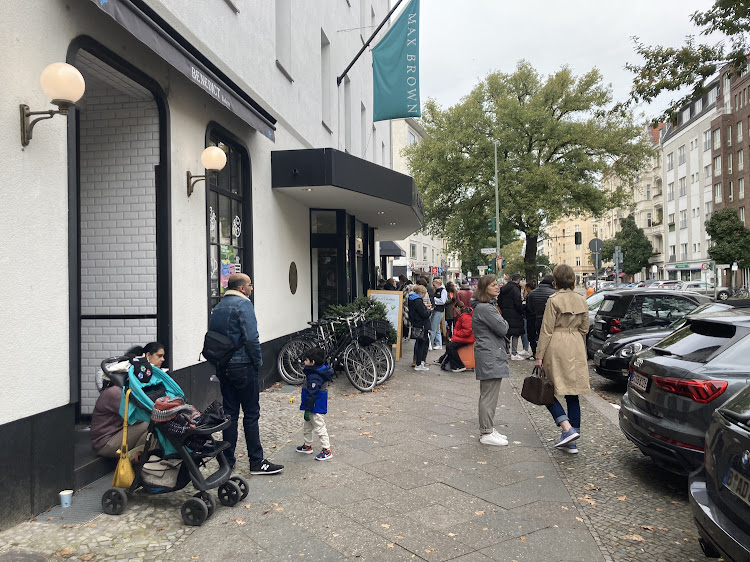 Maultaschen is as close to stuffed pasta pockets as one’s getting in German cooking. At Weyers, traditional meat and vegetarian versions of the Swabian dish appear on the menu alongside other all-stars of the German bistro: Flammkuchen (flat, crispy, bread dough with toppings), veal schnitzel, kartoffelsalat (potato salad) and apple strudel. Swabia is a region that spans the southern states of Baden-Württemberg and Bavaria. But the Maultaschen there are not vibrantly green like these jazzed-up, big city iterations, and don’t look as if a ravioli and a tramezzini got together for a deliciously good time. 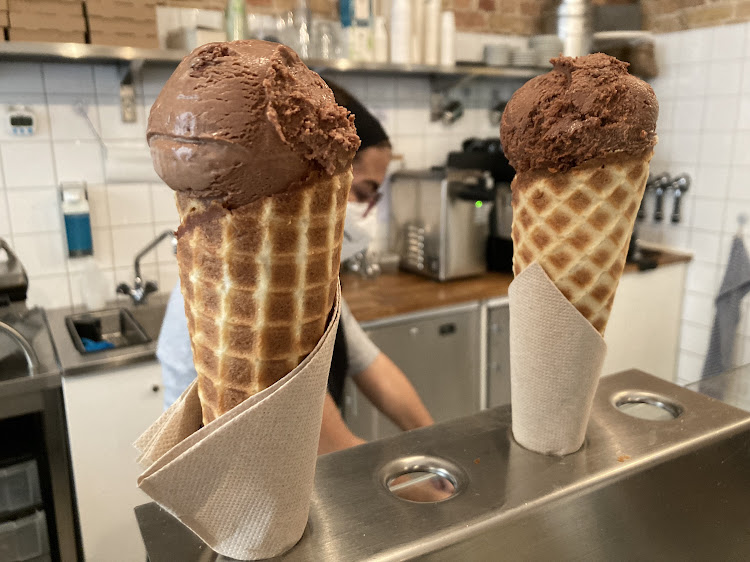 A scoop of choco brownies dairy ice cream on the left and vegan chocolate cake on the right, in homemade cones at Jones.
Image: Supplied

For authentic Italian homemade pasta, paccheri and pappardelle among them, Cali Bocca in Charlottenburg is where it's at. Set on one of the gracious side streets of Kurfürstendamm (Ku’damm in local parlance) — Berlin’s answer to the Champs-Élysées in Paris — the chocolate soufflé is reason enough to go there.

“My life is a chocolate soufflé,” wrote Berlin-based British writer Tom Winter in his first novel, Lost and Found. “The kind you spend hours making, then you pull it from the oven and ... it’s just not what it should be. It’s a disappointment. You look at it and you think, Something went wrong. And that’s the end of it, isn’t it? You can’t just pop it back in the oven and give it a few more minutes. It’s not a mess on its way to becoming something else. It’s just a mess.”

The soufflé at Cali Bocca takes 20 minutes to prepare. It arrives a smooth, pristine dome and in the ensuing five minutes, filled with birdsong and magic, it becomes a prize mess: a glorious, complete non-disappointment of a mess, chocolate oozing all over the show.

Best places in the world to spend New Year’s Eve

Communing with cattle a drawcard at lush Vergelegen

Another reason to visit this historic estate in the Cape winelands is the new Nguni Café pop-up restaurant
Travel
11 months ago
Next Article
© Wanted 2022 - If you would like to reproduce this article please email us.