Everyone is talking about the BMW X7 grille, which BMW proudly says is the largest of its kidney-shaped kind in history 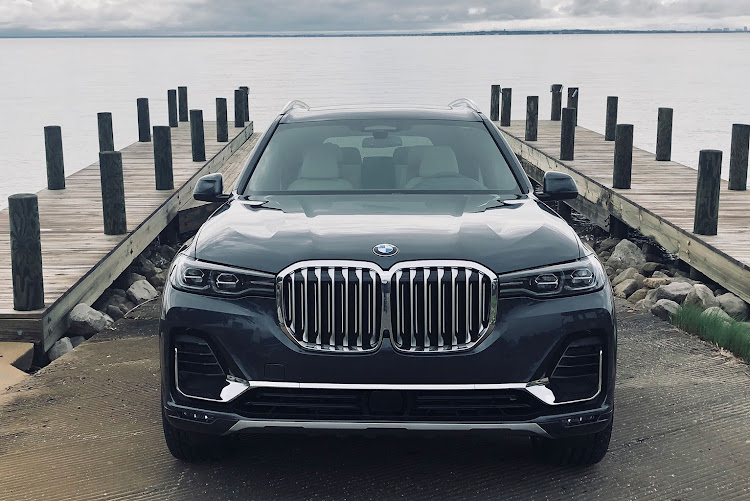 In the US, almost everything on the road is supersized. Drive a small car and you spend your time looking up at passengers in the vehicle next to you. The sports-utility vehicles (SUVs) are large, the bakkies even larger, and those big rigs — well, they are like being passed by an industrial warehousing unit on wheels.

Fortunately, the roads are big, the parking spaces are big, and the space between towns even bigger. This is why the new BMW X7 didn’t actually seem so huge as Wanted ventured out of the Florida capital of Tallahassee on a 600km road trip that would take us through Florida, across Alabama, and into Louisiana to finish up in the famous town of Baton Rouge at the beginning of Mardi Gras weekend.

While there are undoubtedly going to be a few shared BMW Group components under the skin, the X7 does not sit on the same platform as the super-luxury Rolls-Royce Cullinan. This Beemer uses the new cluster-architecture platform that also underpins the latest 7 and several X models. It’s not far off the Cullinan in terms of size though, measuring 5 151mm compared to the 5 341mm of the Rolls. The wheelbase measurements, important for assessing the interior space, are 3 100mm and 3 295mm, respectively.

The Electric iNext concept previews a hi-tech SUV that will serve as a precursor for the styling of future BMWs, writes Denis Droppa
Cars, boats & planes
2 years ago

Its size isn’t the main talking point though: after all, it makes sense for BMW to have a large SUV with seven seats to rival the Mercedes-Benz GLS and Range Rover and, in the US and Middle East, those massive Yank tanks such as the Cadillac Escalade. Rather, everyone is on about the grille, which BMW proudly says is the largest of its kidney-shaped kind in history. It dominates the façade of the X7, but is far less of a thing than that huge braai grille on the new 7 Series.

You’ll either love or hate this façade. And in these times of smaller grilles (as we move towards electrification), it seems odd that BMW has gone the other way. But behind the chrome slats are numerous clever elements of the brand’s efficient dynamics package, with components opening and closing to improve cooling or aerodynamics.

When the X7 goes on sale in South Africa in May, it will cost from R1 554 500. This is a car that’s all about status and providing plenty of space and versatility for those who need it. According to BMW, said people are mainly soccer moms who will probably keep the third row of seats folded away most of the time to maximise use of the standard 750l of boot space. Put them up to accommodate those extra kids who you need to take home and that space is reduced to 326l, 31l more than in the Merc. Leave all the kids standing on the touchline, fold the second and third rows down and you have a massive 2 120l.

Specifications and dimensions aside, this car is really about wafting around in luxury and it’s very good at that. As we left Tallahassee, it began to pour down and it was immediately clear just how much effort had been put into isolating the cabin from external noise. Rain on the windscreen was all we could hear. 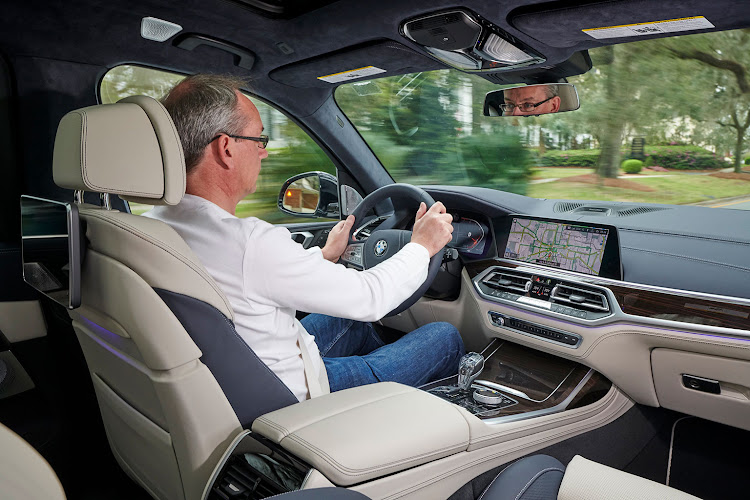 Even sitting on 22-inch wheels, there was barely any sound coming from the road as we engaged the active cruise control and settled in for the long journey. We’d been told by Daniel Nowicki, the project manager for driving dynamics on the new model, that the team had put a great deal of effort into making sure the trademark BMW dynamics were there. He even suggested that we hit the brakes and turn mid-corner to show how stable the X7 is. We didn’t. Actually we couldn’t, because the interstate roads that cross this part of the US barely feature anything like a corner at all.

The long stretches gave us a chance to take in the luxury though. The X7 will be available with the usual three rows of seats for seven passengers, but you can also have a six-seater, which features two individual captain chairs in the middle row, complete with their own multiple adjustments and massaging features.

We learned more about attention to detail when we grabbed an hour with the project manager of the X7, Jorg Wunder, after the launch had ended. Wunder explained that he’d wanted every occupant to have their own space in the vehicle. That includes their own USB ports, their own cup-holders, and even special ambient lighting. Sit in the very rear and a narrow light strip will warn you if an object is approaching before you climb out of the vehicle.

Importantly, Wunder wanted the third row of seats to be properly usable — and they are. This isn’t a minibus, of course, so over long distances things might start to feel a little cramped for adults. But they are proper seats and you get decent headroom, which is unusual for any seven-seater. And you get your own controls to move the seats in front of you to give yourself more legroom if you need it. 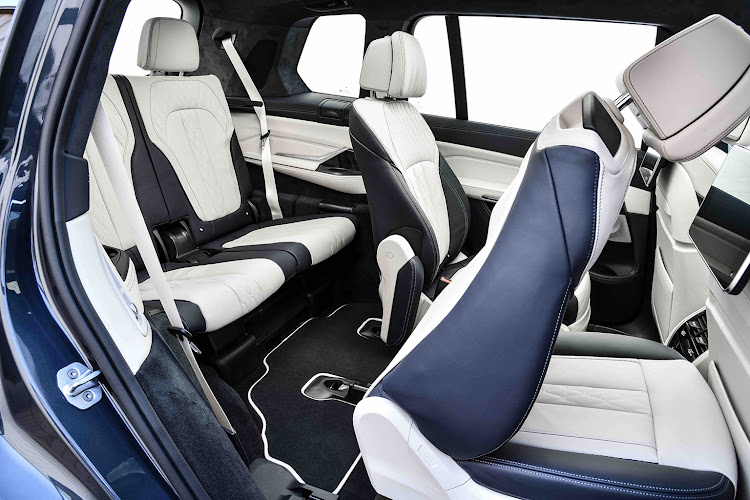 The BMW X7 is available with the usual three rows of seats for seven passengers.
Image: Supplied

Wunder also explained the driver-assistance systems, which proved to be somewhat temperamental on our trip. On multiple occasions the vehicle misread the road markings and pushed us back into the lane even when the indicator was engaged. Turns out there are rules detailing how you must use the indicator for the system to understand you properly. It’s easy to forget that driver-assistance systems are computers: they do exactly what they have been told to do; there’s no interpretation of the rule. When Wunder gets in, he switches the system off.

We did our trip of the South in a day, so saw little but the inside of the spacious but cosseting X7. It’s more luxurious than the Merc — and more tech-laden, too. It’s not a Range Rover, but we are assured that it has some off-road ability, depending on the model and package. It’s not a Rolls-Royce, but it doesn’t have a Rolls-Royce price tag either.

It’s clear the X7 is exactly what Wunder and his team set out to achieve — it is the 7 Series of SUVs.

As the BMW X6 is to the X5, Porsche has unveiled a new coupé to line up alongside the popular Cayenne SUV
Cars, boats & planes
2 years ago

Only 10 Range Rover Velar SVAutobiography Dynamic Edition's will be available in SA, arriving in the second half of 2019
Cars, boats & planes
2 years ago