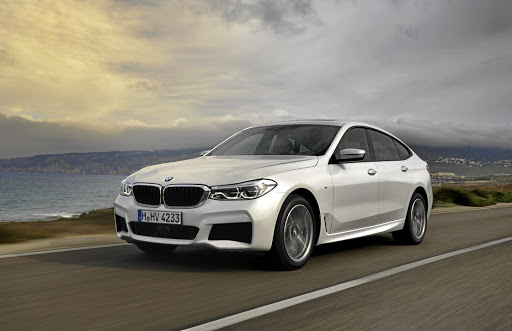 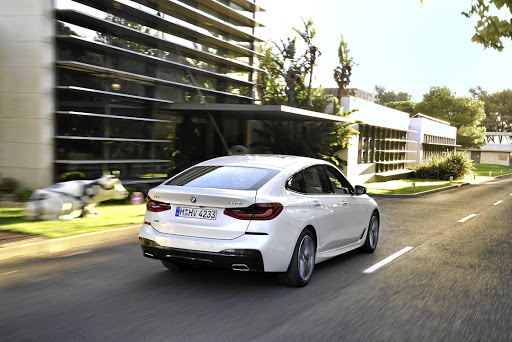 Audi’s A7 has been an unmitigated international success story. It’s still lauded for its styling (even as its successor emerges), its dynamics are strong and it’s a great cruiser.

Yet this same genre has befuddled BMW, leaving it swinging at ghosts and looking a bit silly everywhere bar China and South Korea, where people inexplicably liked the 5 Series Gran Turismo.

Yet the A7 continues to prosper, a tribute to the design confidence Audi showed, once upon a time.

BMW’s GT nameplate has moved on, though, and now sits on a 6 Series instead of a 5 Series and it’s even longer than before. Always a massive car, the new G15 model has added 8cm of metal between its axles as it moves on to the 7 Series limousine’s wheelbase.

The company has attended to the old car’s design awkwardness by chopping 2cm from the roof height and another 6cm from the height of the tailgate, where the pop-up spoiler resides.

Those two things alone take a lot of the visual heft out of the car, but it’s still kinda chunky compared to an A7.

Shifting to a 3,070mm wheelbase (95mm longer than the 5 Series) promises more rear legroom, which will be vital in China and South Korea, the countries that gobbled up more than half the 150,000 5 GTs built over the past eight years.

While people were put off by the old car’s graceless design and its disconcerting mass of rear metal, they usually enjoyed its enormous, well-laid out interior. This one’s even better inside. It’s more practical, with another 110l of luggage capacity (now 610l), or up to 1,800l with the seats folded flat with a 40:20:40 rear-seat split-fold arrangement.

It has inserted the hydraulic struts into the liftback itself, which broadens the cargo opening. It also uses the one-piece tailgate idea from the facelifted version of its predecessor.

BMW says the interior feature people like most is that the driver’s hip point is 6cm higher than it is in the 5 Series, giving people a semi-crossover view of the world. There are handling challenges associated with that, but it also gave the ride people more suspension travel to work with.

The interior has plenty of class and space
Image: BMW

It has air springs as standard on the rear end, which includes a self-levelling function, though a full air-suspension system, with four-wheel steering, constantly variable dampers and active roll control is available as an option. Our car had all of that and it was the four-wheel steering that delivered the most obvious benefits.

It might still not look as artistically sculpted as an A7, but it has its own charms. It’s generally cheaper than a 6 Series coupe with the same powertrain, but there’s more.

The lower roofline doesn’t affect the rear-seat headroom. It’s comfortable in all of its seats and that’s helped by a serenity the ageing Audi can’t match. It’s a very quiet place to be when the car is cruising, with the powertrain and the suspension inputs all exceptionally well isolated.

It’s also exceptionally comfortable on sharp bumps and smooth undulations, with the active antiroll system accomplished enough to whip beyond all of the trouble spots we found. The emphasis on comfort doesn’t hurt it in the corners either, because it’s capable of carrying silly cornering pace, to change its line and flit through low and high-speed esses.

You know there’s always plenty of weight there, but the car is willing and able when you point it at the interesting pieces of road. The only negative in the handling package is the steering feels overly light and lacking in feedback. The upside is that the ride quality doesn’t suffer in the Sport mode and its body control and noise suppression remain on point.

Flexibility allows the boot to hold up to 1,800l
Image: BMW

BMW insisted it didn’t put more heft into the steering to maintain the grand touring character of the car, but that doesn’t explain the surprisingly rorty blare of the six-cylinder engine under hard acceleration out of corners. Not that it’s a blare that merits camouflaging. The car sounds fabulous, engaging, even feisty. And it’s never harsh or disturbing.

There are also enormous amounts of money to be spent on lifting the 640i xDrive GT from the base level, including surround sound, a panoramic roof and M Sport Plus and Rear Comfort packages.

BMW only had the light-selling 640i xDrive all-wheel-drive versions available at the launch, but when the new model arrives in SA in November, there will also be a 630d diesel version with rear-wheel drive only.

The price it pays for all-wheel drive is that its engine needs to work its 450Nm of torque more to shift its extra 65kg of mass. The silky-smooth six has a huge spread of torque, peaking at 1.380r/min and holding a plateau until it tapers away at 5,200, almost as the power peak takes over.

But that extra mass isn’t free, with the xDrive’s fuel consumption adding 0.7l/100km to the rear-drive car’s 7.0l figure, resulting in CO2 emissions of 177g/km. It’s strong enough everywhere in its rev range and BMW still seems to have the crispest, cleanest shift setups on its versions of ZF’s eight-speed automatic transmissions.

So it’s a nicer looking car than it was before, even if it still does not exactly merit a spot in the Louvre, and it does an even better job of toting four adults across a continent in utter luxury and comfort. It remains boxed in by the 5 Series sedan, the 7 Series limo and the X5 SUV, so its sales aren’t likely to explode. BMW is still filling a niche, but it’s doing it in a way that might bring it some credit.

The facelift of the i3 electric car adds straight-line speed and swings in extra power and handling with the i3s
Cars, Bikes & Boats
2 years ago

BMW placed more of a focus on its game plan than its new models at Frankfurt
Cars, Bikes & Boats
2 years ago