Hold on to your tinfoil hat! Rob Rose takes a look at conspiracies and why we fall for them 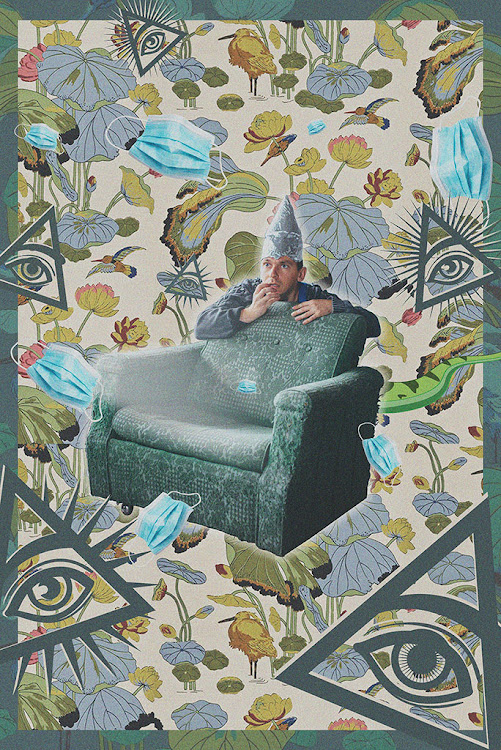 South Africans rarely have the chance to witness a high-profile madman in action on home soil. True, we do have the occasional privilege of reading statements penned by the periodically orphaned Carl Niehaus, reciting how the media is controlled from within an oak barrel in Stellenbosch. But world-famous, certifiable, batshit crazy is an altogether different pleasure.

Finally, we hit the Big Time. David Icke, the king of conspiracy theorists (assuming that there was such a coronation, and it hadn’t been rigged by George Soros) was interviewed on eNCA by former Idols judge Gareth Cliff. With delicious congruity, Icke swung into top form by explaining how even the term “conspiracy theory” is, itself, a conspiracy.

“The term conspiracy theory came into widespread use thanks to the CIA. In the 1970s — 1967 it was — they were getting concerned that people were not buying the official version of the Kennedy assassination, which involved bullets doing U-turns and going through several people at the same time. It was ludicrous. And so they wrote to major media organisations in America, saying they should use the term “conspiracy theory” to discredit those who were not accepting the official narrative,” he said.

The CIA, JFK, and a media cabal in the first sentence; at such a pace, the Rothschilds weren’t even going to be needed.

But this was just the hors d’oeuvres: Icke’s explanation for Covid-19 was vintage, truffle-drizzled lunacy. “There is no virus,” he declared. “Did you know that there’s not a scientific paper on planet Earth that has isolated the virus they call Sars-CoV-2 to show it exists? They had to admit that.”

The struggle over the past couple of months has pretty much been about whose version of truth you choose to believe. And social media hasn’t helped...
Voices
1 year ago

Icke didn’t say who “they” might be — but it wouldn’t be doing him a disservice to suggest he might have been referring to the “lizard people” who run the world.

He was wrong, of course. The genome for this virus has been sequenced, repeatedly, by unrelated geneticists. And there are plenty of scientific papers with titles like “Isolation and characterisation of Sars-CoV-2”. Also, there’s the rather inconvenient fact that, at the time of writing this, over 650,000 people so far have actually died from a virus he claims doesn’t exist.

Icke being Icke, he has a rejoinder. “How do you know they died of Covid-19? Let me give you one example of how this is being scammed: in America, they changed the law when this pandemic first started to arrive... hospitals who diagnosed people with regular pneumonia were paid $4,600.

Suddenly if they diagnosed Covid-19 pneumonia, they’re now being paid $13,000,” he said. These are unrelated facts, tethered together to create the illusion of causation.

How do you know you’ve met a conspiracy theorist, the joke goes. The answer is, it’s right in front of you — open your eyes and connect the dots.

As Joanne Miller, an associate professor of political science, who specialises in conspiracy theories, told Huffpost: “We may very well make connections between things that shouldn’t be connected and create a narrative, and sometimes those narratives end up being conspiracy theories.”

Icke, a footballer and former BBC journalist, must have been a delight as a kid, arguing that he couldn’t eat his peas since they were mind-control pellets.

But, as a Holocaust denier, he’s not just a hoot; he’s certifiably dangerous. That much was clear from the fact that even Facebook, which would presumably have published Mein Kampf in 1933 Germany with a disclaimer like “NSFW — frowning emoji”, booted him off its platform.

MY CELLPHONE WANTS TO KILL ME

Icke might be the most famous, but Covid-19 has unearthed an epidemic of loonies bearing ideas that would make Sharknado seem like a yawn-a-minute documentary.

For starters, there is Plandemic, a movie in which virologist Dr Judy Mikovits spins a yarn about how the US’ Dr Anthony Fauci and other immunologists are part of a conspiracy to push vaccines on people, so they can make money. “The game is to prevent the therapies till everyone is infected and push the vaccines, knowing that the flu vaccines increase the odds by 36% of getting Covid-19,” she says.

That figure is entirely fabricated. And Mikovits, a discredited researcher who argues masks can “activate” Covid-19, seems to believe the entire medical establishment is in on this. Actually, it’s more likely that Steve Hofmeyr is a secret EFF operative, tasked with infiltrating the Afrikaans-music establishment to smuggle out boerewors recipes.

How do
you know
you’ve
met a
conspiracy
theorist,
the joke
goes. The
answer is,
it’s right
in front
of you —
open your
eyes and
connect
the dots

And then there’s Bill Gates. Plandemic, like many room-temperature-IQ WhatsApp groups, names the Microsoft founder as the mastermind behind a plan to push vaccinations, so he can secretly implant a microchip in everyone.

Why? Mind control of some sort, presumably. Or the world’s most intricate game of Tetris. Who knows? It may surprise you to learn, as the BBC points out, that there’s a “total lack of evidence to substantiate this”. And yet, this Gates theory spread around the world, with the microchips now being dubbed “Antichrist chips”.

And if that sounds like you’ve been spiking your Bioplus with a little too much LSD, just wait until you hear all about 5G…

For years, activists have argued that electromagnetic radiation from cellphone masts causes cancer. The evidence for this was never great, but Covid-19 brought a dark twist.

The premise, as former Nigerian senator Dino Melaye explained, unblinking, is that 5G “mobilises flu that comes in the form of the coronavirus”.

Batshit, sure — but it’s a theory that sparked attacks on cellphone towers, from Europe to the US. It didn’t help that in March, R&B singer Keri Hilson said on Twitter: “5G launched in China, Nov 1 2019. People dropped dead”. (Connect the dots, people …)

Others who should know better — such as world-number-one tennis player Novak Djokovic — evidently don’t.

The 33-year old Serb, being no Roger Federer or Rafael Nadal, has always been hard to like. But it’s become a heap harder since April, when Djokovic said: “Personally I am opposed to vaccination, and I wouldn’t want to be forced by someone to take a vaccine in order to be able to travel.”

A day later, his wife Jelena shared a 10-minute video on Instagram, which laid out the case for why 5G causes Covid-19. “What do you think?” she asked — and one of the first to respond was Instagram itself, which slapped a “false information” tag on the video.

So when the Djokovic family contracted Covid-19 in June, there was plenty of schadenfreude. As the UK Independent put it: “While the first thoughts will rightly be with Djokovic and his family’s health… many will hold few sympathies for a man they’ve seen become a victim of his own negligence.”

DUMB AS A BRICK

The question is, why would ostensibly thoughtful people believe dumb-as-a-brick conspiracies about Bill Gates and 5G? Why has the Covid-19 inflection point caused this thinking to mushroom outside of just the mould-sodden basements of the internet?

Experts say it makes sense: as one study puts it, the impulse towards conspiracies is “stronger when events are especially large in scale or significant and leave people dissatisfied with mundane, small-scale explanations”.

The first is to “reject information coming from experts and other authority figures”, and the second is “to view major events as the product of conspiracies, as well as partisan and ideological motivations.”

The study says these theories are more likely to abound when “party leaders and media personalities” promote this sort of misinformation.

This is why Djokovic’s anti-vaccination statements are so dangerous, and why Trump’s early claim that Covid-19 was a “Democratic hoax” laid the platform for the wildfire-like spread of the virus through that country.

As it is, 31% of those polled in the Harvard study believed Covid-19 was “purposely created and spread”. Even in a country where nearly 40% of the population believed, according to a Gallup poll, that God created humans in the past 10,000 years, this is remarkable.

And conspiracies are so delightfully insulated from challenge because, if you ask for evidence, you’ll get the answer: “Of course, they’ll never tell you that…”

Another University of Kent study says conspiracies are attractive as they provide “causal explanations for events,” which allow people to create a “stable, accurate, and internally consistent understanding of the world”.

The glaring problem is that while these theories provide comforting certainty, they’re hardly ever true. However, the Kent study says believers tend not to worry about this too much, partly because they “lack the ability or motivation to think critically and rationally — conspiracy belief is correlated with lower levels of analytical thinking”.

Instead, they prefer to see patterns, an intentional hand behind events — when there isn’t one — and over-estimate the odds that things happening at the same time are connected.

CONSPIRACIES HAPPEN — BUT HARDLY EVER

Which doesn’t mean that there aren’t real conspiracies.

Chris Fleming, an Australian professor and co-author of the book Modern Conspiracy: The Importance of Being Paranoid writes that real conspiracies aren’t as sexy as the ones that suggest a cabal of Babylonian aliens orchestrated JFK’s assassination.

In a complex and nuanced world, who wouldn’t prefer to believe there’s a far spicier secret lurking beneath the surface?

This is a point that South Africans, who’re conspicuously vulnerable to a good conspiracy yarn, should note. In our willingness to believe Jacob Zuma was the puppetmaster of thousands, all yoked to the task of shovelling assets into a shebeen in Saxonwold, we forget that we never once saw that efficiency in anything he did.

As someone smart once said, never ascribe to malice that which is better explained by incompetence.

And yet, just occasionally, conspiracies do actually turn out to be true. For example: the Guptas and their associates did hijack Transnet and Eskom; big tobacco knew that cigarettes caused cancer, but hid it; the CIA did test hallucinogenic drugs on people; and the apartheid government did secretly launch The Citizen so it could serve as a propaganda tool.

But that doesn’t mean we should suspend skepticism. It just means that gargantuan claims require gargantuan evidence rather than, you know, none.

So, if Icke ever produced evidence for his theory that the moon is a hollowed-out space station, or of the “predator race which takes a reptilian form” living amongst us with the goal of enslaving humanity, it’d be a different story.

As Icke said in 2012: “There are dots — like banking, government, 9/11 — which are interesting and you can see something’s not right. But when you connect the dots, that’s when the tapestry appears and you go, ‘Whoa, so that’s what happening.’”

It’s the best example of something science-fiction writer Philip K Dick once said, which was that the mentally disturbed don’t reach for the simplest theory to explain a set of facts; rather “they shoot for the baroque”.

Perhaps you can’t blame them. In a complex and nuanced world, where the real explanation for events is often wearingly prosaic, who wouldn’t prefer to believe there’s a far spicier secret lurking beneath the surface?

Big scams: Rich people who have done stupid things with their money

Rob Rose unearths a history of swindles and scams that duped decades of SA’s rich, famous and erm, savvy
Voices
1 year ago