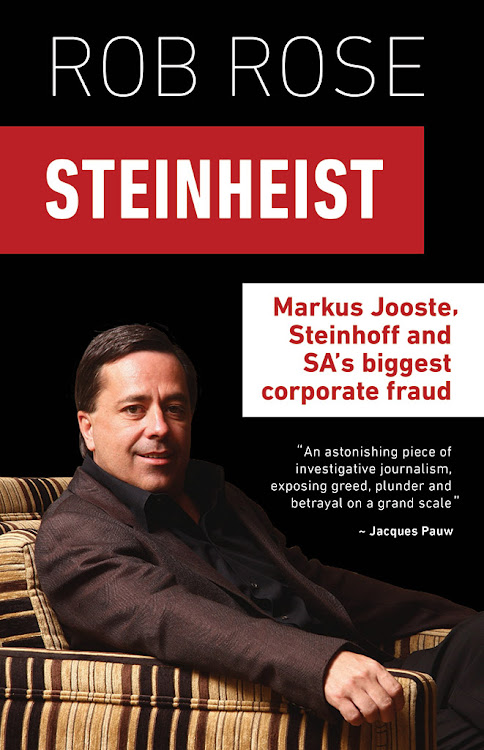 In the opening pages of Rob Rose’s riveting book Steinheist: Markus Jooste, Steinhoff and SA’s biggest corporate fraud (published by Tafelberg and on shelves in late November), he tracks the final days leading to the implosion of the behemoth company.

On Wednesday 29 November 2017 CEO Christo Wiese was told by the Deloitte auditing team that they could not sign off on the Steinhoff accounts. They had reason to believe, the auditors said, that Steinhoff’s management had been defrauding the company for years.

“The enormity of the words hit Wiese as if a wave of icy water had rolled up out of nowhere, and smacked into him,” writes Rose. From there, he chronicles the day-by-day build-up as the absent Markus Jooste feints and dissembles and “compsplains” from afar, while accounting and lawyering wonks run handkerchiefs over their brows and cluster in the boardroom, waiting for him to appear, as promised, with all the documentation they need.

The hours tick by. And then a lawyer arrives with the news: “Markus is at the wine farm Lanzerac, and he’s a mess. Unshaven, sobbing uncontrollably, he is tearing his hair out, saying he screwed up.” The lawyer told Wiese: “Markus has asked me to give you this message: he is offering his resignation, and you must decide whether to accept it. It’s up to you.” And with that, Christo Wiese watched R59-billion — read that again, R59-billion — of his fortune vanish in a puff.

Rose, the editor of Financial Mail (part of the Tiso Blackstar Group, as is Business Day Wanted), is a fluent and engaging writer, and takes the reader back through the history of the company to its German founder Bruno Steinhoff, who did business in the Communist bloc and apartheid-era South Africa. He describes Jooste’s childhood as the son of a Pretoria postal worker, his first job as a “runner” for racing punters, and how his first business was built in the bleak dustbowl of Ga-Rankuwa.

He parses the elaborate con that underpinned the Steinhoff edifice. For instance, how Jooste insiders shifted liabilities off the balance sheet to secretive companies overseas to present a false picture of the profits.

One of the most intriguing chapters deals with the subject of white-collar corruption and the corporate psychopath. Rose quotes an expert’s definition of the traits of the manipulative psychopath: “superficial, grandiose, deceitful, impulsive, irresponsible, not taking responsibility for their actions, and lacking goals, remorse, and empathy”. Moreover, he writes, corporate psychopaths lie with impunity, have a sense of entitlement, and have clear dictatorial tendencies, which often manifest in bullying.

When Jooste appeared in Parliament in September, DA MP David Maynier quoted one of Jooste’s former colleagues as saying he was a “fucking psychopath”, and asked Jooste for his thoughts on the sentiment. “The former Steinhoff CEO was, as you’d expect, entirely unfazed. ‘I am not in a position to comment on that last question, because I am not aware about the statement or have ever heard it,’ he replied, his voice not breaking an octave. But, he added, “I would like to say that I never lied about the activities of the company.’”

Rose is careful to point out that we cannot assume Jooste is a psychopath — that’s for experts to decide, he says — but witnessing those dead black eyes and plat, grinding monotone in Parliament, and his insistence that he didn’t do anything wrong, one can’t help but wonder.

The Nobel Prize for Literature will not be awarded this year, due to a sexual-abuse scandal. Will the Swedish Academy ever recover?
Voices
2 years ago

Bill Clinton–James Patterson thriller is all guns and girls and, well, it blows