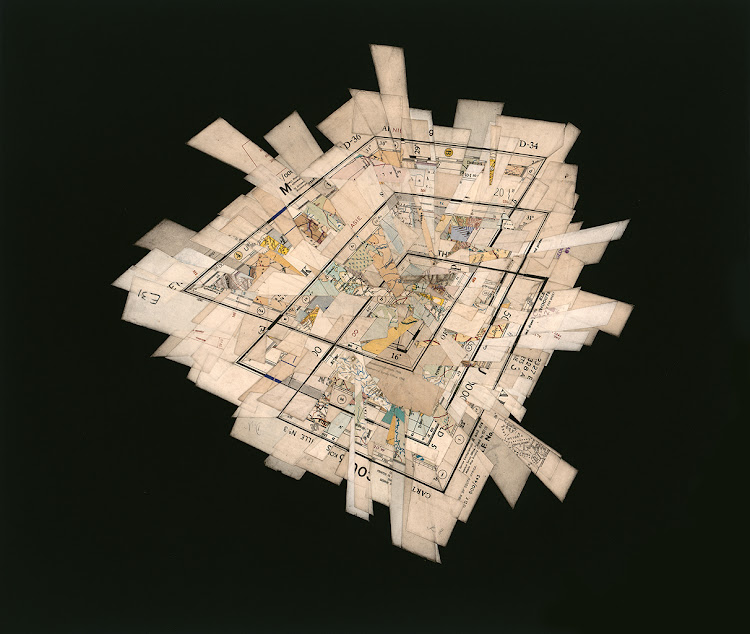 When Gerhard Marx started using snipped-up fragments of maps to create collages, he would join the lines you find on maps — sections of the red marks that indicate roads, for example — to draw a face, a foot, a skull, and so forth.

He was also drawing with all the meanings that cling to the lines he was using: the cultural, political, scientific and historical associations and implications that they carry. He was taking a line that already meant something to us — or which we are accustomed to reading in a certain way — and forcing it to express something new: the colonial will to dominate or control the landscape, for example, or attempts to establish ownership. Or his intention was simply to make us understand the geology, orient ourselves or find shelter or identity in relation to the landscape in the new images. But they became personal, even emotional.

For the mesmerising new works in his show Ecstatic Archive at the Goodman Gallery in Joburg, Marx has turned away from the lines "inside" maps. "I’m drawing with the central device of the map, which is the frame," he says. "I think of that frame as a kind of colonialist viewpoint."

Three local art exhibitions not to miss this February

Make sure you take in the new Gerhard Marx, Zander Blom and David Goldblatt shows
Art & Design
2 years ago

The "drawings" themselves tend to be Escher-like trick geometries. Much like the work of the famed Dutch graphic artist MC Escher, the shapes in Marx’s pieces should make sense, but somehow slip their own logic and, floating in what looks like mapped territory, become groundless. Sometimes background and foreground reverse spontaneously, or space descends into infinity. Planes distort and surfaces seem in conflict with their own logic.

On a fundamental level, Marx takes the bird’s-eye view of the map — the "eye that wants to claim and control" — and "brings that view back down" and "forces it into perspective", he says. "When you do this [force a map into a perspectival view], the map becomes the landscape.

Then, in addition to forcing a perspective representative of one worldview into another, he starts playing games with Gestalt theory — not just the geometric tricks where foreground and background reverse, or the logic defeats itself, but "the way your eye will complete things to find order among chaos". The Gestalt theory he’s playing with — drawing with implication and a minimum of information — creates a "sense of things coming together and flying apart at the same time".

The more you look at the maps becoming landscapes, the more they become insubstantial — the ground seems to vanish beneath your feet. There’s a kind of dizziness in not quite knowing where you stand in relation to the maps, or the territory in front of you.

"It’s something that implicates your whole physicality," says Marx.

"It’s part of why I love playing with perspective. You feel it. You don’t just see it.

"Breaking the flatness of a map is a way of rupturing the certainty the map provides, so instead of the solid ground that a map wants to offer you, I’m trying to create a cartography of groundlessness, of uncertainties and complexities," says Marx.

He says that when he started working with maps in this way, the SA landscape was being renamed. He recalls taking road trips and finding that the names on the map and the names of the towns no longer correlated. "There was this disjuncture between the actual landscape and the naming of the landscape," he says. The territory he really explores in these artworks is still essentially the gap between the map and the landscape. "It’s that disjuncture that continues to be my interest."

The maps that he’s been working with for this exhibition are from the personal archives of people who have offered them to him. And there were maps from a library archive, destined to be pulped. A friend of his sent him a picture of a heap of decommissioned maps with a message that read:"If you want this, phone me."

"And I phoned immediately," says Marx. "I carried maps out of the library for three days."

He describes what he calls the "beautiful bodilyness" of the maps when you carry them. "Maps are big, and paper is incredibly heavy," he says. That also has implication for the weightlessness he seems to create in his images.

Apart from the surprising physicality of so many maps, he adds, "there’s this beautiful poetry about what the archive wants to forget, or finds unwanted … It [is] a kind of image of forgetting, I suppose".

Beyond that, he plays around with the will inherent in the map to dominate and control territory — the colonial will to take ownership through representation.

"They were all attempts to grasp at something or control something, but they were all in a sense failed attempts," says Marx. "And that really fascinated me.

"Yes, maps do speak from a position of authority, but they also inevitably speak from a space of fallibility, and fragility and incapacity to actually contain," he says. "So I think there’s an incredible human element to it, and more so when you start to see them as discarded and decommissioned." 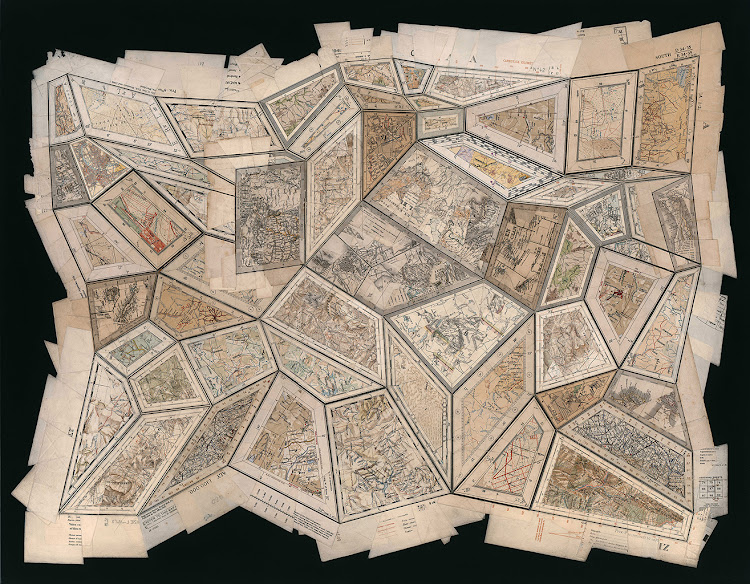 This engagement with the language of maps and landscapes is also a way of engaging with the contradictions of our time. As Marx cuts up maps and uses the frames to make new lines, something happens to the territories around those lines, which has a different kind of philosophical implication.

"What I love about it is that what you’re seeing are fragments of Asia and Germany and SA — and this and that — and they’re all sort of mashed together and thrown together in a way that I think describes the paradoxes of a more contemporary world," he says. "I think of them as migrant maps, in the sense that you’re forcing geographies together, and you’re also forcing time periods together. So instead of a map that speaks of belonging and any kind of geographical certainly, these are maps that talk about hybridity and uncertainty and paradoxes."

The layers, intersections and triangulations that Marx depicts in his works introduce the recurrent theme of crossing, which he relates to the idea of an ocean crossing and the migrant experience. Whether that refers to the Somali crisis or his grandfather’s experience two generations ago as an immigrant from Europe, the concept of "moving from one geography to another" and "that point at which you leave the certainty of your motherland and move in hybridity" is also represented in these artworks’ strange geography.

"A lot of the work I’m trying to make involves an attempt to map that space where we’ve lost the containment of the globe — clear cities, cities with centres, clear centres of belonging and geographical belonging — and instead we are in this complicated place of spatial paradoxes, paradoxes of belonging," says Marx. 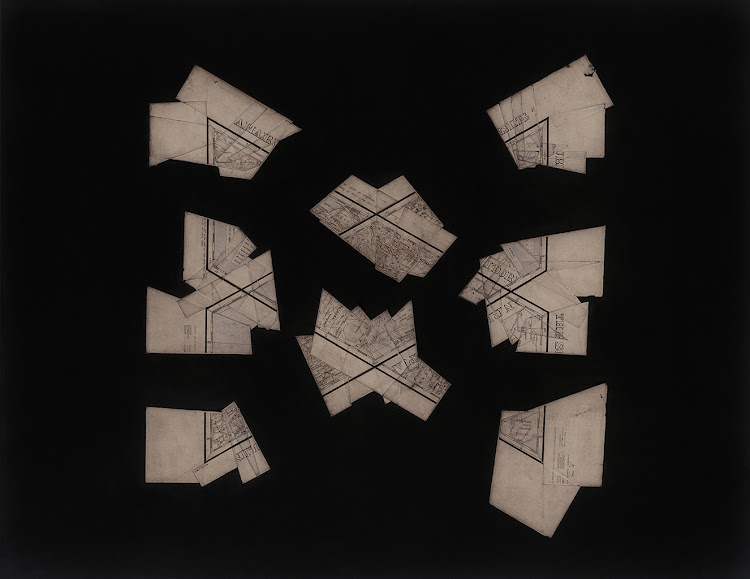 As much as globalisation and urbanisation have upset our relationship with the landscape, there’s also the almost inevitable question of our ecological relationship with it: "an ecological sense of loss, of things not making sense, of things collapsing". And in the axes and triangulations in certain works you’ll even find references to digital space, another element of contemporary life that confuses our sense of space.

So these maps, or landscapes, or virtual spaces that Marx has engineered from the raw material of the discarded past has become the starting point for something new.

• Ecstatic Archive is on at the Goodman Gallery Joburg until March 9.

Graham Wood spoke to Frank Kilbourn, art auctioneer and Strauss & Co’s executive chairperson, about the state of the market after a turbulent year
Voices
2 years ago

- This article was originally published by the Financial Mail.