Graham Wood spoke to Frank Kilbourn, art auctioneer and Strauss & Co’s executive chairperson, about the state of the market after a turbulent year 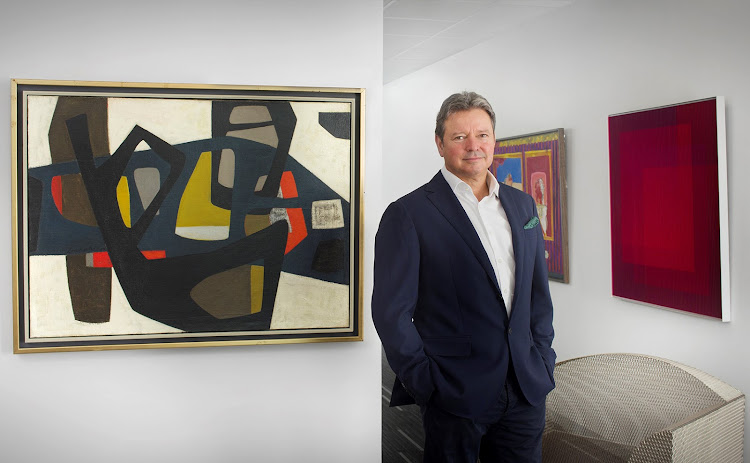 Frank Kilbourn, executive chairperson at Strauss & Co, says rather understatedly that 2018 “wasn’t exactly the most conducive market for non-essential items”. By which he means art. Or, it shouldn’t have been. “We’ve had negative economic growth in South Africa for half of the year,” he says. “We’ve got every little great news out there.”

Despite South Africa’s economic woes this year, the auction house nevertheless managed its second-highest turnover in almost a decade of existence. Sure, it wasn’t quite as high as last year’s “extremely high base”, but he argues the art market’s performance this year “reflects very well on the depth of the market”.

He’s less interested in comparisons of year-on-year results, however, than talking about state of the market in broader terms and what he sees as a host of “new beginnings” – changes and shifts in “the art ecosystem” he believes “bodes well for the future”.

Is art theft a thing in South Africa? We canvass the experts to find out if we’re living in a home-grown version of 'The Thomas Crown Affair'
Art & Design
2 years ago

Kilbourn has noticed – and worked hard to contribute to – a broadening of the base of the kinds of art entering the secondary market and in the base of active buyers. “More than 10% of the people who bought from us this year are new buyers who bought for the first time,” he says.

He says these green shoots are not down to a single cause but are rather “the result of a number of concurrent actions that are coming to fruition”.

One of the first things he mentions is the rise of contemporary South African art. Strauss & Co held South Africa’s first auction dedicated to contemporary art in February this year, coinciding with the Investec Cape Town Art Fair. It was a huge success and they’ll do it again next year. But, he points out, the interest isn’t just among local buyers.

“What we have seen in the last two to three years is the very strong emergence of South African and African contemporary art becoming collectible internationally,” says Kilbourn. To start with, he points out, international interest in South African art wouldn’t be possible without high-quality art and artists. “We have that,” he says, explaining he believes that, apart from the raw talent in South Africa, the art schools and other institutions that help artists develop their talent are impressive.

He also believes art galleries, traditionally the institutions that nurture artists, have been doing good work finding international markets, particularly when it comes to the increasingly important role art fairs play in the global art market. “South African art as a whole gets exposure through our galleries taking mostly contemporary art to these fairs,” he says, mentioning the likes of Art Basel, the African Art Fair in Paris, AKAA, 1-54 Contemporary African Art Fair in London and The Armory Show in New York, among others. “[They’re] difficult to get into, so I think [galleries] have done, by and large, an excellent job,” he says.

Add to that the growth of the Joburg Art Fair and the Cape Town Art Fair. As they’ve matured, Kilbourn points out, “They are appealing to a much greater market and attracting a much greater gallery base than we’ve had before.” With that comes more international visitors, which helps develop new markets for South African art, too.

He’s already noticed the effects on the secondary market. “We, literally for the first time, sold to people in Lithuania, New Zealand, Spain and Portugal,” he says. Some of these are from the South African diaspora but he also suspects international audiences might relate to local art in “a different way than we anticipate”.

Speaking of attracting international visitors and raising the profile of local art in the global market, he also mentions the effect the opening of the Zeitz MOCAA and The Norval Foundation have had in the areas of contemporary and modern art. The opening of the Javett Art Centre in Pretoria next year will add to the “critical mass in the research and curatorial presentation of South African art”, in this case mostly through privately funded institutions. But Kilbourn is convinced these initiatives will stimulate the public art institutions, too, which is always good news for the way in which art is valued.

Aside from the contemporary market, however, Kilbourne says there have been changes to the modern artist base. Strauss & Co has made concerted efforts to grow neglected segments of the secondary market. He mentions particularly the achievements of overlooked and unheralded black modernist artists of the 20th century. (In November, Strauss & Co presented a session inspired by the landmark 1988 exhibition at the Johannesburg Art Gallery, The Neglected Tradition, which it dubbed An Unsung History.) Other groups of artists who have been neglected by the secondary market, Kilbourn indicates, include the Natal School, which has also been brought to market in a more meaningful and substantial way. “It broadens not just the collector base, but the artists base, quite significantly,” he says.

As an interesting aside, he’s noticed buyers and collectors of contemporary South African art behave differently from traditional buyers, which might have an effect on the market. “Whereas modern art may reticulate every 10 to 15 years, or 20 years, and often top works only every 35 years, we find with contemporary art that three to five years has now become the horizon within which people are looking to change their collection,” he says.

The other significant change in the way art collectors buy has been the rise of online art auctions. While still only accounting for a small portion of overall sales, this part of the market is growing. “[This year] we had the highest total ever for online sales for one year,” says Kilbourn. Online auctions also attract a new audience interested in affordable art.

On the flipside, he says, “We have never had more people attending our dinners, auctions, lectures and pre-auction events.” They might not necessarily be active buyers yet but Kilbourn says it shows even more interest among a “completely new audience”. “We are very excited about where that might lead us to in the next five to 10 years.”