In South Africa, there are tidal pools dotted along the False Bay coastline worth dipping into 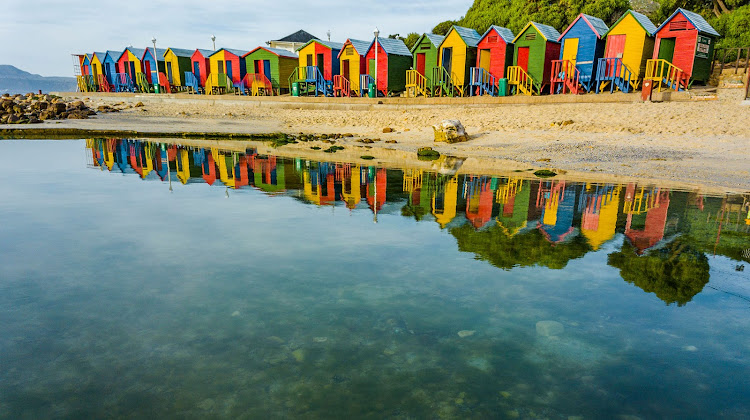 Exactly twenty years ago, an English nature writer called Roger Deakin published Waterlog, his unique record of swimming the tepid rivers, wild waters, and the tide-pawed coasts of Great Britain. The book has since become a nature-writing classic, going on to play a significant part in starting what has come to be known as the “wild swimming” movement in Britain and elsewhere.

Not a month goes by nowadays without some new title about dipping into your local lido (public pool), or wallowing in your local swimming hole on a balmy summer afternoon. Swimming the 52 lakes of Berlin, as Jessica Lee does in Turning? No problem, we’ll buy up the rights. Braving the lochs of Scotland? Into your trunks laddie, we’ll publish the manuscript.

Deakin begins Waterlog by taking a swim in the green waters of the moat that surrounds his Suffolk home in a rainstorm. Once immersed, his is the view of the frog. He notices that rain calms water. It clears flotsam and pollen sinks to the moat bottom.

With rain comes a haze, which seems to levitate to meet a “lowering sky”. “Then the rain eased and the reflected heavens were full of tiny dancers,” writes Deakin. “Water sprites springing up on tiptoe like bright pins over the surface. It was raining water sprites.”

There is a great deal of this kind of stuff in Waterlog, which makes it not only an extended meditation on water’s healing properties (Deakin is sad at the start of his water log over the loss of a long love) but a trippy paean to the substance. Where there is water, there is light, and the two are in constant play, leading to luminescence, vapour, rainbow. It calls to mind the English Romantic artist John Constable, who once remarked of the famous JMW Turner, that he painted “tinted steam”, and makes for peacefulness and happy contentment.

Unlike the meandering — and sometimes treacherous — brown rivers of Africa, Britain’s water is mostly benign and so easy to swim. Deakin moves from his moat to swim around Jura in the Hebrides, the island to which George Orwell retired in 1946 to write Nineteen Eighty-Four. He swims in pools in Penzance and the famous River Granta in Cambridge, immersed but always coming up — as it were — for a little bit of social history, anecdote, and reflection.

Despite South Africa not always being good for wild swimming, there are places closer to home in which one can indulge in Deakin’s fantasy of happy weightlessness. What better way to honour Deakin (who died in 2006) than to swim in the tidal pools that dot the False Bay coastline from St James to Glencairn, all of them unique, all of them with their own shades and personalities? 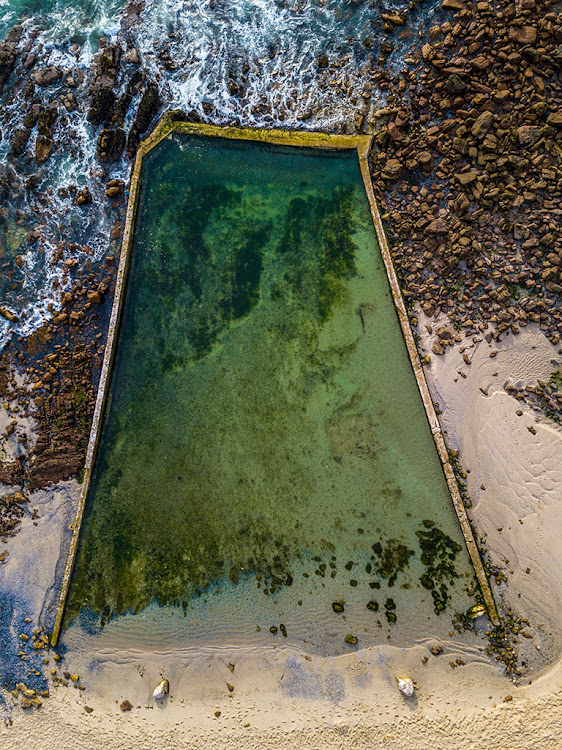 The crown jewel of such pools is the St James tidal pool, flanked by the famous brightly painted changing booths. Situated on the site of an age-old Khoisan fish-trap, according to local historian Michael Walker, the walls of the pool were a mission to build. They often collapsed or were washed away. It took several years of pleading by the original contractors to have the municipal budgets extended but eventually the walls held.

Today they measure approximately 30m each for the two (not quite) perpendicular walls, while the far, sea-facing wall which links them is about 15m long. The walls are fully exposed at low tide and fully submerged at high tide about six or seven hours later, giving the pool a magical here-it-is, now-it’s-gone aspect.

Attracting everyone from oupas with boeps rolling over their trunks to timid toddlers and young posers, the pool is welcoming and egalitarian. Hot days on weekends are wild with activity. Families camp under umbrellas for the day. As the shadows lengthen, even ouma can be persuaded to take a tentative wade through the shallows. A little further in and you’ll notice that the sides of St James Pool are mussel-thick, the bottom a profusion of sea-lettuce, tiny starfish and many varieties of seaweed.

TIP: if you’re not much of a diver and want to access the cold water slowly, tip-toe alongside the right-hand retaining wall. The beach sand extends all the way into the centre of the pool and that way you’re unlikely to have to deal with the sea urchins that dot the pool bottom and can get stuck in your feet and the palms of your hand.

The next pool along as you approach Kalk Bay is Dalebrook pool (on the other side of Danger Beach). Dalebrook is easily accessed from the main road via an underpass beneath the railway line and is a smaller, deeper pool than St James. It is built around several white-washed rocks, and because its outer margins are sometimes difficult to see, it has a charming not-sure-where-it-ends feel to it. On Sunday mornings it comes into its own, as folk from outside the area arrive by the car-load to take a quick dip in the pool before crossing the road to the Dalebrook Café for breakfast. 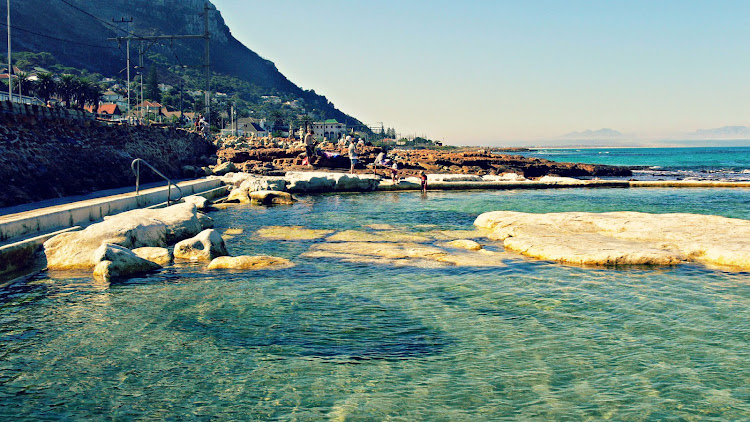 Wooley’s Pool, on the other side of the Kalk Bay harbour as the road and railway line stretch through Clovelly on the way to Fish Hoek, is similar to Dalebrook in that it is built around whitewashed rock and access is gained via an underpass. Parking hereabouts is possible but limited, which gives Wooley’s a special, secret-hideaway kind of feel. If you time things just right — and are exceptionally lucky — you might just spot a whale in Fish Hoek bay as you splash about Wooley’s yourself.

My two favourite pools are on the other side of Fish Hoek, both on the road to Simon’s Town. The first is the Glencairn tidal pool on the Simon’s Town side of Glencairn beach. A long, thin pool with splendid views of the lighthouse, the pool attracts several hardy souls who swim it year-round, doing regular lengths and then popping up to the nearby Glencairn Hotel for something warm and fortifying.

TIP: there’s an underpass that allows you to avoid crossing the main road, which can be accessed from the grass verge beneath the hotel. It takes you onto what passes here for a catwalk before the Glencairn pool itself. Beware, though: the catwalk paving stones are jumbled and uneven, and it can be flooded at high tide.

Best of all on this stretch of coast is the almost-forgotten Shelley Point tidal pool, which is accessed by walking the dirt road for about 200m beyond the parking lot behind Glencairn station. In truth, the Shelley Point pool is badly dilapidated nowadays, with several sections of its main wall having collapsed. Whenever I swim there, I feel as though I am swimming in a ruin. It’s best to swim the short distance to the main wall and turn your back on it, looking back at the beach from which you’ve just come. There’s a ledge of rock and pebbles at the base of the wall and, sooner or later, you’ll be bombed by a breaker. It’s cold, exhilarating fun to squint through the spray in the bright, precious light. Deakin would have written about it with the easy erudition that made Waterlog such a precious book.

Gillian McLaren hits the bucket-list big-time on a thoroughly exotic, luxury adventure along the Amazon River
Travel
2 years ago