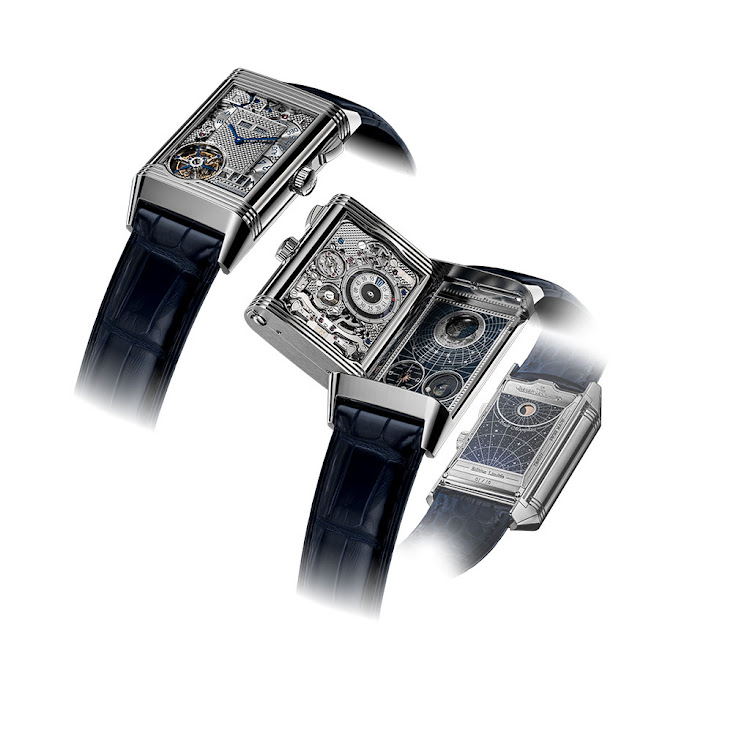 Hubris (hyü-bres) is the Greek word for excessive pride or self-confidence, and often has negative connotations. However, in the case of Jaeger-LeCoultre it is justifiably applied to the nomenclature in its family of groundbreaking grand-complication timepieces. The new Reverso Hybris Mechanica Calibre 185 Quadriptyque also warrants a celebratory beating of the grande maison’s chest.

With a total of 11 complications this is the most complicated Reverso, and one of the most complicated watches ever made by Jaeger-LeCoultre. It is also a fitting celebration for the 90th anniversary of the Reverso, which has evolved over time from a single dial in a mobile case that could be turned over within its cradle, revealing a solid caseback to withstand the rigours of polo matches. Its unique Art-Deco case has been reinterpreted once again for the Reverso Quadriptyque, with the engineers making full use of the canvases of the world’s first four-dialed watch as a creative expression in both design and precision engineering.

The horological equivalent of a children’s fantasy pop-up book, its mechanical wonder is revealed in microscopic detail as you turn the four “pages” of the Quadriptyque. Making sense of the world and the heavens, early astronomers and mathematicians commissioned the instruments able to mechanically compute the positions of various celestial objects. The Reverso Quadriptyque does this within the confines of a watch of just 51.2mm x 31mm x 15.15mm in size, which is also remarkably wearable for a watch this complex.

On the recto face, the flying tourbillon first grabs the eye, accompanied by the display discs of the instantaneous perpetual calendar, grande date, day, month, leap year, night, and day. A perpetual calendar requires exceptional mastery of miniaturisation to create the highly efficient and accurate movements that can correctly display all date information despite variable months and leap years. Highlighting the precision of the Calibre 185, its perpetual calendar indications are also instantaneous, changing at the stroke of midnight.

Here are the current themes in the luxury watch industry, with some standout timepieces
Watches & Jewellery
1 year ago

On the verso face, Jaeger-LeCoultre demonstrates its mastery of grande sonnerie. With the slide of a lever located just above the crown, the minute repeater chimes out its uninterrupted melody. The striking works of the movement are on full display alongside a secondary time display with jumping-hours and peripheral-minutes.

The case cradle houses the third and fourth faces of the watch. On the top half of the interior face is a large representation of the phases of the moon in the northern hemisphere. While conventional displays of the moon phase accumulate one day of error after 32.5 months, the Reverso Quadriptyque is accurate to one day in 1 111 years. For the first time in the history of mechanical watchmaking, Jaeger-LeCoultre also combines three displays of lunar information in a single wristwatch. This determines eclipse events (both solar and lunar) and rare lunar phenomena such as supermoons. Below the moon- phase display is a counter that shows the draconic cycle as the path of the moon intersects with the orbit of the Earth around the sun (known as the ecliptic). To the right is a counter that represents the anomalistic cycle, showing the apogee and perigee of moon to Earth. A representation of the phases of the moon in the southern hemisphere is shown on the outer face of the cradle.

The secret to the four functioning displays lies in a solution first seen in the 2006 Reverso Hybris Mechanica Grande Complication à Triptyque. At midnight every day, a pin extends out of the main case movement to activate a mechanical corrector in the cradle, which then advances the cradle displays. The watch also comes in a box with a built-in mechanism that will quickly and intuitively set all the calendar and astronomical displays, alleviating any Tamagotchi-esque anxiety you might have.