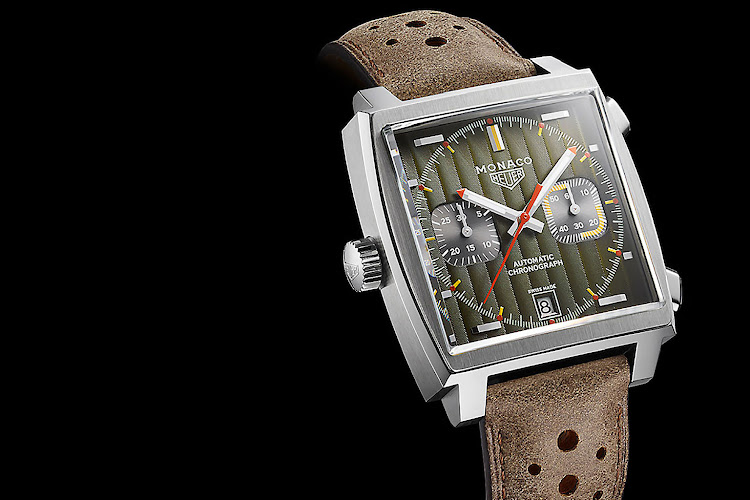 The watch industry feels more upbeat this year, with brands highlighting their mechanical expertise — most notably, their complications. This trend is apt, given that it’s the 50th anniversary of the legendary square-faced Heuer Monaco, as well as its revolutionary Calibre 11 Chronomatic, the first automatic chronograph movement.

I’ve become quite attached to a certain vintage Monaco, one of the very first produced. It’s a reference 1133B from early 1970, which I’ve proudly displayed on my wrist for a few weeks as if it were my very own. Sadly, this significant piece of horological history, with its deep-blue dial, will be returned to its rightful owner, but it has brought me much insight, attention, and joy. This timeless classic with its left-set crown looks just as contemporary now as it did futuristic back in 1969.

The Monaco was conceived by young Jack Heuer, the great-grandson of founder Edouard Heuer. It was not the first of his designs to establish the brand as a maker of high-quality chronographs. However, until the launch of the Calibre 11 — produced in collaboration with Breitling, Buren, and movement-makers Dubois-Depraz under the code name Project 99 — all chronographs were manual winding.

The Monaco is also significant in that it was the first water-resistant, square watch featuring a chronograph. Innovation in both design and technology immediately set the Monaco apart, with its unique steel case distinguishing it from the competition.

If the absence of a running seconds counter is a little disconcerting, some of the more recent reissues have a running seconds at 3 o’clock, with a minute chronograph counter at 9 o’clock, rapid date correction, and an open caseback showing the entirely new Tag Heuer Calibre 11. On all new Monaco Calibre 11 models, rectangular push-buttons replace the original’s rounded ones.

When I monitored the chronograph of “my” vintage Calibre 11 with a digital stopwatch, it was fairly accurate for all short time-keeping tests, but lost about five seconds when I let it run to 12 hours. I guess this isn’t so bad for a 50-year-old watch that might not have been serviced for a while. 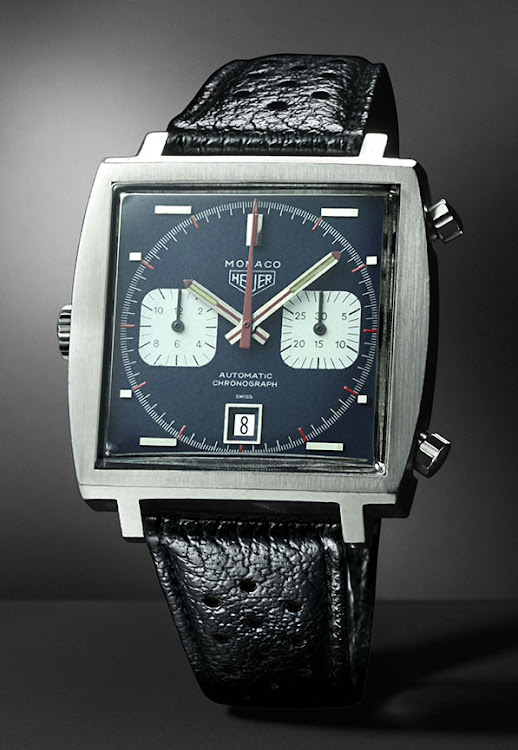 The relatively rare original models, which are named after the Monaco F1 Grand Prix, were produced until the mid-’70s. However, the Monaco was relaunched in 1998 under then new owners Techniques d’Avant Garde (Tag), which had acquired Heuer in 1985. Since then, its iconic case and calibre have been reinvented numerous times through concept models, such as the V4 and the Sixty Nine with its double face.

Former Tag Heuer chief executive Jean-Christophe Babin maintains that Jack Heuer (now 87 and the honorary chairman of Tag Heuer) also led the way in marketing. He gained expertise in this field in the ’50s and early ’60s during his time establishing the brand in the US. He achieved a major coup during the filming of Le Mans in 1970 by getting a Monaco on the wrist of Steve McQueen. The rest is history.

To celebrate the latest milestone, Tag Heuer has unveiled the first of five limited-edition models inspired by the five decades of the Monaco. It has also released a collector’s book, titled Paradoxical Superstar, that explores the Monaco’s popularity among enthusiasts. This ’70s-inspired piece has a green dial with brown and yellow touches and a Côtes de Genève finish.

A vintage Heuer Monaco on the secondary market will set you back from R80 000 to R160 000, depending on the condition. But a Le Mans-featured watch was reported to have fetched about R1.2-million at auction in 2009.

With the 50th anniversary of iconic Nissan GT-R and Seiko milestones, it's time for celebration
Watches & Jewellery
3 years ago

It is the original El Primero’s 50th anniversary this year, and Zenith has released a collector’s trio of chronographs, limited to an edition of 50
Watches & Jewellery
3 years ago