A case for bricolage as a strategy for global repair 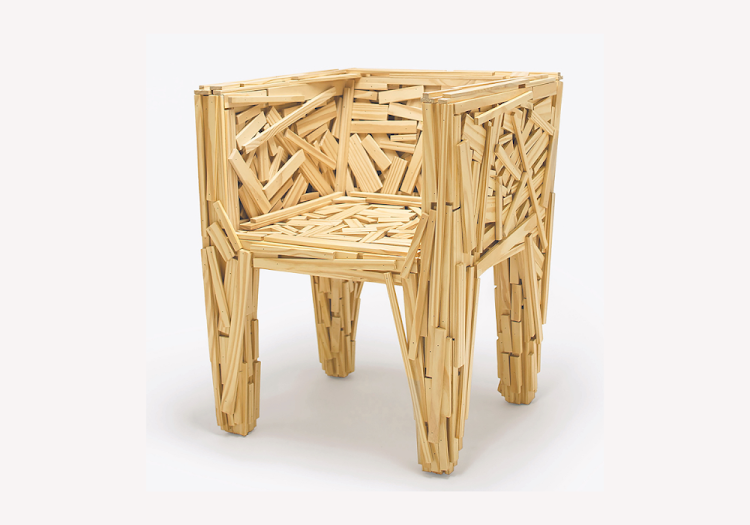 Does the world really need another “designer” chair? I’m easily seduced by beautiful things, such as the designer objects that tempt us all from sleek billboards or the glossy pages of magazines. Yet, looking at all the superfluous stuff that surrounds us and to which we keep adding, it becomes brutally clear that the designed world is saturated. What to do?

In Langa, Cape Town, in a studio named Our Workshop, Heath Nash and his team of bricoleurs make wonderful items from unlikely things. They collect what others chuck out. Humble and cheap materials are reimagined and assembled to make new objects of unexpected beauty. At the same time, thousands of kilometres offshore, the Great Pacific Garbage Patch (GPGP) is growing. What connects these two disparate places? The GPGP epitomises how we overload the world with stuff.

Let’s be honest — all the billions of bits of plastic and other detritus comprising this eighth “continent” were, at somepoint, designed. This floating messof thoughtlessly discarded things embodies the throwaway culture to which we subscribe so religiously. “Planned obsolescence” predetermine show businesses design artificially short lifespans into products. Buying a thing designed to be essentially irreparable— not if, but when, it breaks — makes us complicit supporters of this global church of waste.

Kojo Baffoe | Design as the sum of all influences

Enter the bricoleur — one who takes a designerly approach to working with what’s already in the world. Nash has built a career on preventing plastic waste from being, well, wasted. Bricoler is a French loan word meaning “to tinker or make do with what’s at hand”. It often leads to innovative design solutions that are not likely when employing a more engineered approach. Bricolage relies on acts of trying, testing, and playing. And serious play is what Nash and his crew do best.

I enjoy the irony of these collectors collecting trash as a subversion of the term “collectible design”.  This label is valued in a rarefied world where the goal is collecting rare and prohibitively expensive design originals. What’s sought after by a jet set of collectors is work by acclaimed (often dead) designers and pieces by a vanguard of contemporary designers. In the uppermost echelons of curatorial decision-making, collectible designs are deemed worthy of inclusion in collections such as those of MoMA in New York.

As an example, the work of São Paulo’s Campana Brothers (Humberto and Fernando) exemplifies the global success of a studio of humble beginnings that now surfs the stratosphere of collectible design. For me, their potency as designers lies in the instinctive rawness at the heart of their earliest pieces, often chairs.

A problem with conventional definitions is that “design” is generally traded as object focused. This object-fixation isn’t helpful when it comes to repairing an overloaded planet and atmosphere.

These works, such as the Favela chair (1991), made from timber offcuts, are “inhabited” by flashes of observational and improvisational cunning. The downside of global recognition is that such designs become unattainablefor most. This skewed notion of “value” is as old as the failure of the Bauhaus movement to make real its original intention of excellent and affordable “design for all” through mass productionin collaboration with industry. A problem with conventional definitions is that “design” is generally traded as object focused. This object-fixation isn’t helpful when it comes to repairing an overloaded planet and atmosphere.

I work in the Faculty of Art, Design and Architecture at the University of Johannesburg. Part of my job is to teach design to aspirant architects. “Design” is a slippery term that can align itself to, adapt, or morph into a set of responses appropriate for solving a given problem, large or small. Adjectives such as interactive, transformative, and transdisciplinary help us take design from limiting understandings of it, as artefact, and transfer its meaning into a networked and more far-reaching zone of problem-solving.

Understandings of design have been dictated largely from the perspective of the West and North. Definitions are canonised and rarely sufficiently questioned. In the era of ubiquitous hashtags, #design is often misused — and almost as poorly framed as the word #curated tends to be. Bricolage offers us more open, site specific, and inclusive understandings of design. Since anthropologist Claude Lévi-Strauss (no, those famous jeans are not named after him) famously invoked bricolage in the 1960s as a lens through which to better understand how mythologies are structured, the ter mhas been absorbed into new ways of rethinking various branches of both the sciences and the humanities.

So, when it comes to ways of creatively un-designing the world by tinkering with and carefully reconsidering what’s already in it, I suggest thinking of bricolage as a critical mode of “unworlding”. As part of the urgent societal project of decolonisation — in this case, of design — I suggest a reversal of literary theorist Gayatri Spivak’s important colonial critique, via her haunting term “worlding” (the manipulation of the colonised space by the coloniser through acts such as map-making and education).

“Unworlding”, I believe, opens a reparative decolonial direction towards the inclusive and coproduced reimagining of a post-colonial world. Considering the myriad chairs and other furniture already in the world, Studio Propolis — designer-makers working between Kenya and the UK— recently developed a highly poetic and enabling toolkit called “Furniture Doctor”.  It comprises joining elements and patches that make possible the easy repair of stressed or broken furniture.

There’s a beautifully tender image in a recent Instagram post by the studio. The photograph, taken in Nairobi’s industrial area, shows the broken leg of a cheap, moulded-plastic chair carefully stitched, by hand, back to its seat. This image bears testimony to new pluralistic understandings of design as reparative. It counters the wilful ignorance of throwaway culture and planned obsolescence and reveals a sensibility — particularly refinedin the Global South — from which the North and West can learn a great deal.

Structural architecture & simple interiors come together in this holiday home

What is everyone looking for in residential property right now?

Lockdown cabin fever inspired people to look for a “piece of land with some green and a view of the sky”
Voices
4 weeks ago
Next Article
Commenting is subject to our house rules.
© Wanted 2022 - If you would like to reproduce this article please email us.

Key stats that show how unfair much of the world is to ...