Films to expect at this year's Durban International Film Festival

The festival runs from July 21-30, with films being divided between online and physical screenings 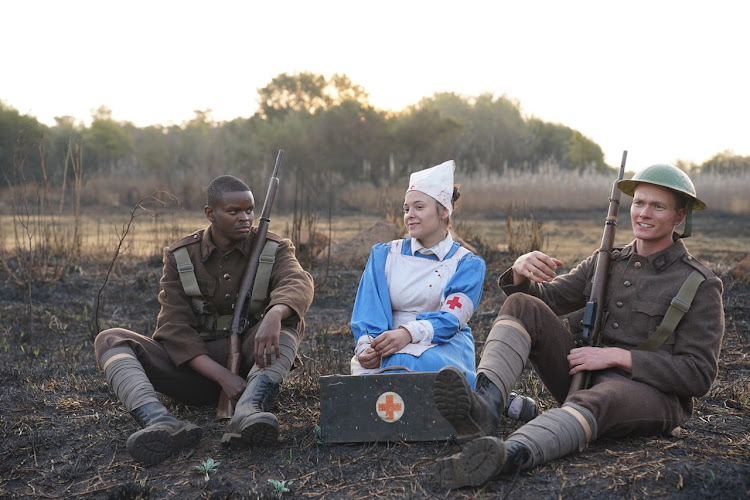 A scene from Delville Wood, a film that will be screening at the Durban International Film Festival.
Image: Supplied/DIFF

With things in the arenas of music gigs, theatre performances, art exhibitions and cinemas finally able to return to some sort of pre-pandemic normality, it’s time for the 2022 edition of the Durban International Film Festival. The festival is not quite returning to full live screening normality though, with 2022’s selection of films being divided between online and physical screenings.

There are also a smaller selection of films to choose from than in previous editions but that’s OK — the important thing is that the festival is still there and that there are still plenty of films from around the world to choose from that include a variety of features, shorts and documentaries.

In anticipation of the always-tricky task of choosing what to watch over the course of the festival, which runs from July 21 — 30, here are a selection of highlights for your consideration.

Directed by Michael Motumbo and King Shaft, the festival’s opening night film is a solid time-jumping drama about a reclusive singing star who is forced to take a harsh journey into her past to help unravel the mystery surrounding the discovery of the remains of an apartheid-era police officer. When an investigator comes calling she tells him a story that takes her and the audience back to the bad old days of apartheid SA in 1960 in the months leading up to the Sharpeville Massacre but is she telling the whole story or is there something she’s holding back?

The closing film provides another opportunity for director Jahmil X.T. Qubeka to flex his impressive cinematic muscles with an Eastern Cape road trip story that takes a decidedly dark and supernatural turn. The story centres on a group of high school friends in an Eastern Cape township who as they’re about to graduate decide to take a journey to the fabled hole-in-the-wall where, as Xhosa legend tells it, you can talk to the dead. Vibrant, energetic, darkly comic and spooky it’s a refreshingly honest portrayal of the real lives of teens that pulls off a satisfying mix of drama and horror thanks to strong direction and some compelling performances from its young cast.

Director Jenna Cato Bass continues to carve her own singular cinematic path with this claustrophobic psychological thriller that injects some Jordan Peele-style racial terror and atmospheric chills into its examination of the particularly SA phenomenon of domestic workers and their uneasy co-dependent relationship with their employers. When a struggling single mother is thrown out of her house in the townships of Cape Town she and her daughter move in with her mother who is the domestic worker for a sick, elderly white woman in the palatial suburb of Constantia. Things get ever more creepy and tense as the “good Madam,” weaves her twisted spell on the family from her bedroom upstairs with increasingly terrifying results.

Written by Jenna Cato Bass and produced by SA’s Steven Markovitz, Tanzanian director Amil Shivji’s second feature film is a beautifully realised and moving romance set against the turbulent background of the final years of British colonial rule in Zanzibar. When a young Indian-Zanzibari woman on her way to be married to a much older man, meets and falls for a young fisherman and freedom fighter, a passionate and dangerous love affair begins that will see both the lovers’ lives and that of their country irrevocably changed.

Tunisian director Mehdi Hmlili weaves a double tale of injustice, betrayal and tragedy that offers a poignant piece of social realism, which takes aim at the inequalities and inequities of modern life in his homeland. When the factory worker mother of a promising teenage soccer player makes a terrible mistake in her attempts to secure a future for her son, the unjust punishment she receives tears their already fragile family apart and sends mother and son on different but equally hard journeys into the underworld of Tunis where it’s uncertain whether or not they’ll survive or ever see each other again.

The ghosts of the past are also very much at the centre of Japanese filmmaker Masakazu Kaneko’s quietly moving and reflective drama about a young Tokyo man who spends his days working on a construction site but has dreams of becoming a manga artist. When he finds a skull on the construction site and accidentally meets a mysterious woman looking for her dog, he begins a strange journey that will transport him back in time to a reckoning with the city’s traumatic wartime history.

The tension between Russia and Ukraine are explored in Ukrainian director Maryna Er Gorbach’s timely and affecting drama about two expectant parents whose poor, ordinary lives in the contested Donetsk region on the Russian border, are turned upside down by an aeroplane crash that forces them and their neighbours to take sides in the battle between the two countries.

The polarisation of India and the battles between Hindus and Muslims in the wake of the demolition of the Babri Masjid mosque in 1992 and the Bombay blasts of 1993 are explored through the tender and heartbreaking story of childhood friends in director Prasun Chatterjee’s thoughtful drama. The story focuses on two 8-year-old friends living in a remote West Bengal village whose innocent lives are horribly jolted by the harsh realities of the dangerous rivalries that ripple through the country.

Belgian director Jeroen Perceval mixes social drama and thriller in this gritty tale of the unlikely bond that develops between a 14-year-old drug dealer and one of his customers, a successful actor. As their relationship develops the unlikely pair begin to find in each other’s company a means of regaining some of what they have each lost.

Actor Agam Darshi makes her directorial debut with this gently funny dramedy that gives charming voice to the experience of immigrant families in Canada. Darshi plays a failed writer who is forced to return home to look after her sick father and finds herself reconnecting with her roots and her family as they come together to help care for their father and ultimately each other.

A strange but intriguing and singularly energetic film from Ghanaian director Kofi Ofusu-Yeboah. The main plot focuses on a young woman who returns to the city where many years previously she was “gifted” to a white-art dealer. Looking to enact her revenge for this injustice she enlists the help of a former lover and together the odd couple set off on a road trip through Ghana that offers Ofusu-Yeboah the opportunity to take aim at a host of social and political targets in a series of increasingly bizarre encounters that offer a colourful and darkly comic peek into the many layers of Ghanaian life and society.

A fictional political drama inspired by the true story of Baby Pendo who was killed during the election violence in Kenya in 2017. Director Robin Odendo tells the traumatic story of the elections and their violent aftermath through the journey of his central character a struggling university graduate who is forced to find work as a “bodaboda”  motorbike taxi driver. When riots erupt after the elections he takes the opportunity to vent his years of frustration at the government and into a terrible confrontation with police that will have fatal consequences.

A Taste of Our Land

Rwandan director Yui Amuli used his own experiences working on a Chinese mine in his country as the material for this hard-hitting political and social drama that takes aim at the dark side of the growing Chinese influence on the continent. Set in an unnamed African country the story follows the battle between an older man who takes a gold-nugget from a Chinese run mine built on his land and flees to try to sell it only to find that the obsessed mine supervisor is hot on his heels and bent on recovering it. It’s an angry and pertinent look at greed, power and the new scramble for Africa.

German director Jan Tenhaven tells the remarkable and moving story of twins Adam and Ida who were separated at the age of three years during the holocaust in Poland. Decades later the two are reunited to share their very different experiences of unspeakable horror, survival and a return to their spiritual roots and a reckoning with the horrors of the past.

Dedicatedly filmed over a decade, Lebanese-Syrian filmmaker Noura Kevorkian follows the heart-wrenching misfortunes of a family of Syrian migrant workers in Lebanon who after the outbreak of the war in their homeland are left in limbo. They carry on with the rituals of everyday life for 10 years under the uncertain shadow cast by the brutal violence ripping apart the country they were forced to leave behind with a determination to survive and keep their traditions and memories alive.

A touching portrait of the defiance of spirit of Amr, a talented young poet whose hopes of success in the post Arab Spring creative environment of Egypt are dealt a horrible blow when he’s diagnosed with acute kidney failure and must embark on a life changing physical and psychological journey in an effort to seek treatment.

German director Lena Karbe tenderly examines the lives, hopes and threats faced by the all-female anti-poaching unit in the Kruger National Park who must fight not only the poachers but also the toxic masculinity of their environment and the conservation world they work in.

Lebanese director Najjar offers a contemplative consideration of the state of Lebanon through an examination of the pigeon game of “Kash Hamam,” and those who play it. As the city of Beirut falls increasingly into turmoil around them, the colourful characters of the pigeon keeping world struggle to keep this ancient tradition alive and their hopes for the country intact.

Director Seydou Cissé trains his lens on three young West African immigrants living in Spain as they struggle to maintain their connection to Cameroonian spirituality in the difficult world of life in Europe as refugees.

Portraits of the Future

Argentinian filmmaker Virna Molina offers a wide-ranging, visually striking meditation on the “new normal” in this experimental film essay made after a planned previous project was derailed by the onset of the Covid-19 pandemic, forcing her to change tack and reflect on what the future might look like, not just for filmmakers but society at large.

• For the full programme of films and to make bookings for screenings visit durbanfilmfest.co.za