Films that provide moments of wonder, mystery and enjoyment

Times are tough and uncertain, but there are always the pleasures of a great film to get you through everything from fuel price hikes to load-shedding 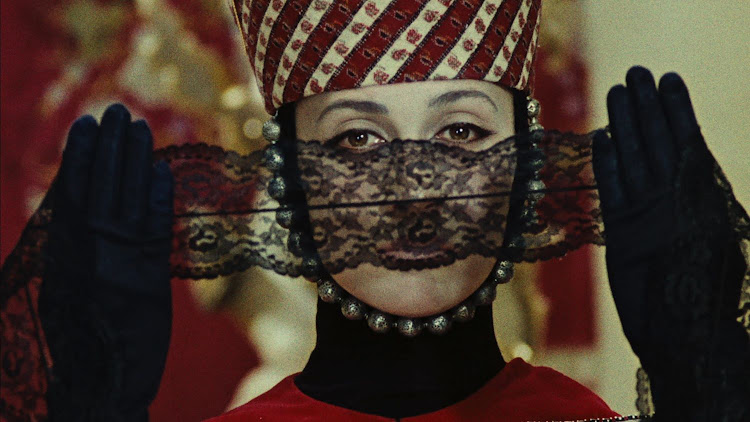 A scene from The Color of Pomegranate.
Image: Supplied

This week’s titles aren’t linked by any common thread other than that they’ve helped to provide a few moments of wonder, mystery and solid enjoyment that offer a faith in the power of cinema that it’s increasingly hard to have in humanity.

The Colour of Pomegranates — Mubi.com

Often cited in the list of the greatest films ever made and one of cinema’s most beautiful and ethereal creations, Sergei Parajanov’s 1969 trailblazing piece of visual poetry is now thankfully more easily available to film lovers in the form of a lovingly realised restoration care of the Martin Scorsese World Cinema Project.

Predictably butchered and given only a restricted release by Soviet authorities on its release, it is ostensibly a biographical portrait of the 18th century Armenian poet Sayat-Nova but it’s really a pioneering work of early queer cinema and a still unbeaten demonstration of the marrying of the visual with the poetic in any medium.

Parajanov presents a series of tableaux inspired by moments in the poet’s life but coming completely from the very singular imagination of the director to the accompaniment of brief extracts from Sayat-Nova’s poems in a mostly dialogue-free environment.

Films to expect at this year's Durban International Film Festival

The festival runs from July 21-30, with films being divided between online and physical screenings
Voices
1 month ago

The role of Sayat-Nova is played by actress Sofiko Chiaureli, who switches gender throughout the film as the screen is increasingly filled with memorable images taken from religious iconography and Armenian culture.

The film is a personal tribute by Parajanov who was of Armenian origin to one of that culture’s great literary figures and more broadly to the forgotten rich heritage of the history and culture of a people who suffered brutal oppression.

It’s not an easy film to access but once you fall for its impressionistic imagery and evocative atmosphere, it’s a very difficult to forget. Often celebrated but too often unseen it’s a rare cinematic treat that’s difficult to describe but should be experienced as one of the more effective experiments in cinematic abstraction that manages to hold satisfyingly together for the course of its difficult but rewarding 77 minutes.

The second film in master Italian director Michelangelo Antonioni’s “trilogy of alienation”, examining the bourgeois ennui of the post-war Italian middle class is perhaps the hardest to access but has proved to be an enduringly intriguing and rewardingly rewatchable creation.

After L’Aventura in 1960, Antonioni turned to the subject of marriage for this second film in 1961 and ended the trilogy with the nuclear anxiety drama l’Eclisse in 1962.

The debonair Marcello Mastroianni plays Giovanni Pontano who's married to the beautiful but detached Lidia (Jeanne Moreau). Over the course of a single day and night in Milan Antonioni’s carefully controlled camera watches as the heightening emotional tension between the couple boil to the surface and destroy their marriage.

Three films that reflect on the issue of reproductive rights

Somehow the rift that’s opened up between the couple over the course of these few hours is so vast that it’s thrown them into complete confusion and turned them, and us, into mere spectators of the pointlessness of their own lives and the insurmountable contradictions inherent in existence in general.

The whole thing heaves with bitter disappointment, fear of death and eroticism that lurk just beneath its calmly controlled surface and it remains a masterful dissection of the emptiness at the heart of so much of romance in the modern era.

It achieves this completely through its careful assemblage of elements within its strikingly shot frames and a subtle use of gestures and looks exchanged by its stars that communicate so much more than they could in words.

The Gambler — Rent or buy from Apple TV+

James Caan, the wild macho hero of 1970s cinema, who was best remembered for his role as Sonny Corleone in The Godfather, died last week, leaving behind a complicated legacy and several memorable and often overlooked other films.

Czech born director Karel Reisz, who made his name as one of the pioneers of the British social realism movement in the 1960s, takes an uneven but still often satisfyingly cynical look at the grimy world of gambling in 1970s America.

Written by James Toback and starring Caan as a New York City English professor who spends his days inspiring students with his lectures on Dostoevsky and his nights slowly becoming a caricature of the Russian novelist’s protagonist in his novel The Gambler thanks to his addiction to games of chance. He is in debt to his bookie but he believes he can still ride lady luck to success and for a while it looks as if he may succeed but then things catch up with him and force him down a dark and dangerous path.

It isn’t Reisz’s best film and writer Toback made a better version of the story with his own debut — Fingers starring the Harvey Keitel — some years later, but Caan’s bravely complicated portrayal of macho hubris is the real standout; it lifts the film and remains one of the best performances of his career.

These three films explore the intertwining lives of characters in different places around the world
Art & Design
6 months ago
Next Article
Commenting is subject to our house rules.
© Wanted 2022 - If you would like to reproduce this article please email us.