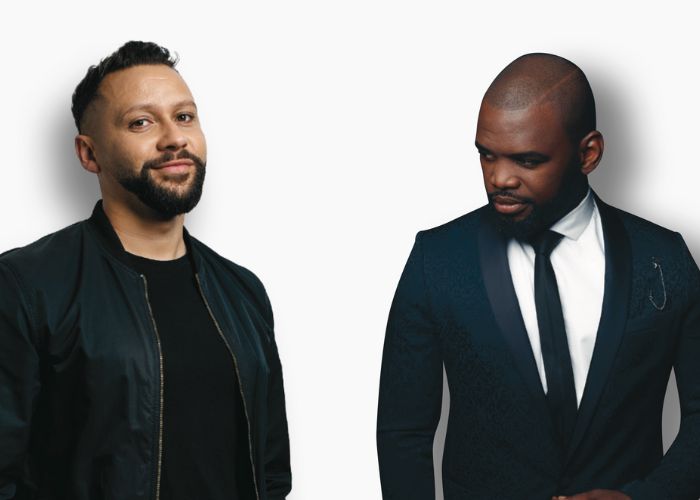 Donovan Goliath (DG): So, modern masculinity — I think we’ve both jumped into a lot of these kinds of conversations. I had a great IG live with Siya Kolisi, who showed a side to him that I’ve never seen before. He got really emotional; he spoke about connecting with his dad again, you could hear in his voice that, man, this is something that he needed to do.

It was so interesting, because he said that being captain of the Springboks, you’re expected to be this superhero. Once you’re on that field, you’re taking knocks physically, you’re taking verbal abuse, there’s this pressure of millions of people watching you. You have to win, but nobody ever speaks about what happens when that final whistle blows and you walk off and you’ve lost. That’s a lot of weight that you have to carry.

Siv Ngesi (SN): I think masculinity in 2022 is multifaceted and diverse. It’s known as this toxic thing, but it’s a positive thing when used correctly. I’m very big in Siya’s life and he has a strong woman by his side, an in-your-face kinda woman. I think Siya understands that vulnerability is a superpower, and I don’t think us men have been brought up talking about that.

Currently, if you Google me, the second picture is of me dressed up as a woman, you know what I mean? I think masculinity is evolving [and becoming] about consistency, accountability, vulnerability, and humility. Siya is all of that, moulded into this shape of a man who’s a Black man, who’s big, who’s strong, who’s successful; but he’s also emotional, he’s vulnerable, he’s consistent, he’s a daddy, he has a wife, and when he messes up, he’s accountable for those actions.

Two accomplished medical professionals, educationalists, and businesswomen unpack empowerment and share how their families inspired their service
Voices
4 months ago

DG: There are seven people I know, three of them good friends, who’ve all become girl dads. We often try to hang out and just understand this thing, like, how do we prepare them for a world that isn’t designed for them at all? They’re born into a world that is just constantly gonna bash them, they’re always gonna be seen as “lesser than”. So, I go, “Man, what is it that I need to understand?” Do I need to become more of a feminist? Do I need to understand the world a little bit better? This is an interesting fight, because everybody always says, “Oh, you’re gonna have to get a shotgun now because you’ve got a little girl.”

So, in your mind you go, “Shucks, am I gonna have to start going to the gym and become a bit more intimidating to young men who wanna take my baby girl out on a date?” And I’m like, no, that’s not the answer, because now I’m just perpetuating that stereotype of what masculinity is supposed to be, that you’re supposed to be this strong, alpha male who goes hunting with a spoon and comes back with an entire deer on his shoulders. In my heart of hearts, that’s not the person I am. I believe in authenticity, I believe in vulnerability, I believe in all of those things. It’s taken me a very long time.

This is probably because my mother passed away at a very young age, and my dad brought us up. There’s an image that makes me very emotional when I think about it, of me watching my dad plait my sister’s hair. My sister must have been about six years old and she’s sitting in between his legs and he’s trying to plait her hair. I walk into the room and I’m like, “Whoa.” I started becoming very protective of my sister because of that moment, because I wanted to take the pressure off of [my dad].

Even at that age, I needed my dad to understand that he wasn’t alone in this. As a result, I developed this kind of armour, this Kevlar that made me impenetrable to emotions. I had to be the strong one. It’s hurt a lot of relationships along the way, because I never let all of myself out there. Only now, man, am I super comfortable with who I am and what I do.

SN: What I have a problem with at the moment is that when you hear the word masculinity, negative connotations come forward. I feel that masculinity is like nuclear power. Nuclear power can do incredible things, but in the wrong hands it can kill hundreds of thousands of people. Masculinity in the right hands is a beautiful thing that can plait a six-year-old daughter’s hair, that can stand up for people and change lives and protect and provide, but in the wrong hands it’s toxic.

So, for me, the power of a woman is incredible, but then the Westernised world mixed with my Xhosa-ness. I’ve only been able to be who I am in the past three to five years, being able to really learn what it means to me, and trying to reinvent and re-evaluate what masculinity is to me. It’s a process, man.

DG: You’ve obviously taken a lot of backlash with your alter ego Sivanna, because the opposite of Sivanna is the cut-from-stone, Greek-god-looking Siv, who is ready to take on anything. When you put the two side by side, it’s almost like people have no idea what to do with this. They just can’t grasp what is happening here. Who are you? Who is Sivanna?

SN: Sivanna had nothing to do with anyone else but me. Just after lockdown, I was trying to understand, reinvent, re-evaluate, and reimagine what masculinity meant to me. I was doing predominantly feminine things — ballet, pole dancing. I just fell in love with drag. Being involved in drag has made me a better version of myself. There’s something about drag that is indescribable; wearing a dress and heels. It’s painful, but you have to act like everything is okay.

Many women don’t feel safe around men, and that’s a problem

How many times do women, walking around every single day, with their purses tightly clenched, have to act as though everything is fine? Everything is not fine. I’ve travelled the world, and you can judge the safety of a country by how tightly a woman holds her purse. In South Africa, they have it wrapped around and they hold it like this and they have their car keys between their fingers. We have the things to hurt them, we have a penis, we have hands, we have aggression, we have testosterone. We can overpower them, we have weapons to hurt women, so let’s not make it a “them” thing. How many times have we let men do things and kept quiet? How many times have we helped these monsters? We have helped to grow monsters. You asked me what we can we do.

I think we start with one boy at a time. We hold ourselves accountable and we hold the boys accountable. We have to educate them about what needs to be done and what is right and wrong.

DG: It’s not going to go away tomorrow, but we definitely can start moulding and educating and getting people to speak about their feelings; getting people to focus on things like integrity, authenticity… Unpacking what self-care actually means, more than just physical grooming, for example.

I’m sick and tired of that bullshit. I just think we need to be consistent. I was with a group of boys the other day, doing a talk, and they asked, “Uncle Siv, can you give us some dating advice?” I said to them, “When you’re with a woman, she must feel as safe as possible in the shortest possible time.” Many women don’t feel safe around men, and that’s a problem.

Activist, theatre practitioner and sharp-dresser Thokozani Ndaba speaks about her foundation, man-made ideas of gender and the power of forgiveness
Voices
1 month ago

This June Wanted explores the complex world of masculinity through conversations, personal essays and interviews. In our first profile, George ...
Voices
1 month ago
Next Article
Commenting is subject to our house rules.
© Wanted 2022 - If you would like to reproduce this article please email us.