An open letter to wealth

Verily, a blessing for the few can be a curse for the many 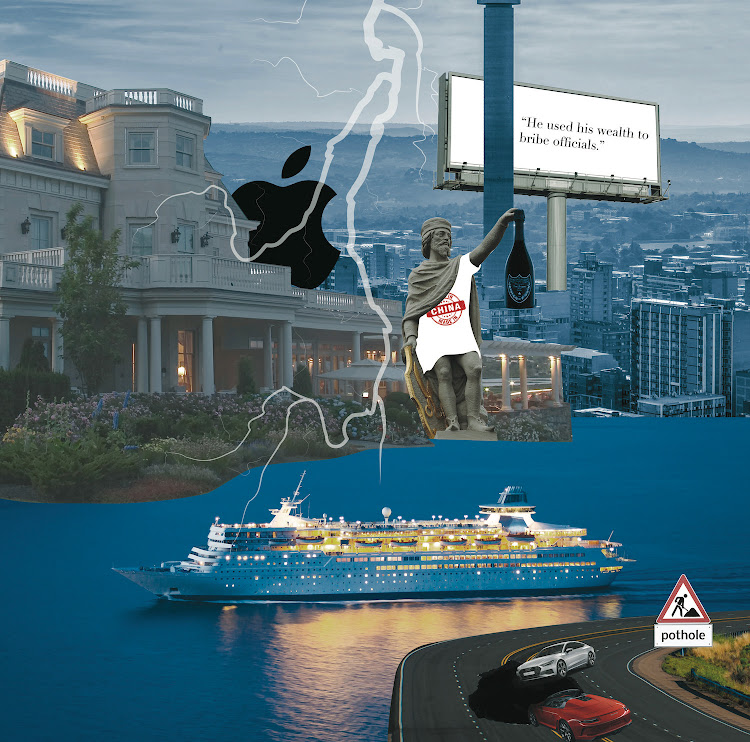 All over Greece, there are thousands of churches and roadside shrines. On a sailing trip a few years ago, I visited Tilos, a small island of about 63m2, and they were dotted all over the landscape. I was told that there were at least 100 of these physical manifestations of the worship of God on the island. On Mykonos, another island, there are around 800 churches, which works out as one per family. And here in the modern world, we also have our many roadside shrines to our favourite god, Wealth.

They’re not quaint stone churches, or little altars hewn into rock. They’re garish billboards and bus shelters plastered with advertising, each a little homage to a brand that stands in as one of your acolytes, Wealth. I like to think that you use this medium to speak to us, your true believers, with messages that only we can decipher. How else to explain the bus shelter up the road from my home, emblazoned with a picture of one of those handmaidens of Wealth, the estate agent, with the accompanying message, “Price is what you pay, value is what it’s worth.”

If this is true, Wealth, how do you explain some Joburg restaurants? Are they a test of our faith in you? Hugely expensive plates of soulless food that tastes of anxiety and avarice. Ingredients so stripped of authenticity and honesty that their only relationship to the earth is that they cost it. How do you rationalise corrupt politicians who steal money to buy themselves a handful of high-performance luxury cars, cars that they must then drive very slowly because that money was supposed to fix the potholes?

It's all in the zeros...
Voices
3 months ago

What are we to make of those who claim to be your true believers, and yet think it’s okay to buy a R100-million mansion in Cape Town, a city where 5 000 people sleep on the street every night? How do you explain those people who pursue you so desperately that they’re willing to sacrifice the pension funds and savings of ordinary people so that they can splash out in a restaurant on 20 bottles of Dom Pérignon Luminous at R6 000 a pop?

At this point, Wealth, we have to ask: are you inherently evil, or are the people who worship you evil? Are you on the side of good, as the capitalists would have us believe? I take comfort from the fact that you recently chose to smite the unbelievers by causing lightning to strike a ship carrying 3 965 VWs, Porsches, Audis, and Lamborghinis. Well, I assume it was lightning that made the ship catch fire.

I’m not suggesting that people who are wealthy are automatically deserving of punishment — only that some ways of worshipping you may be morally better than others. When you search for a definition of wealth in the dictionary, you find it described as “an abundance of valuable possessions or money”. What’s particularly telling is the example chosen to illustrate how to use the word in a sentence: “He used his wealth to bribe officials.” Why do we think of wealth being used selfishly, when it could be used for good?

There is actually a patron saint of wealth, and perhaps his life is a morality tale about how to worship you. St Homobonus was canonised in 1199, and he was a businessman — well, a merchant — from Italy. He believed that God had allowed him to work so that he could make money to support poor people, and he donated a hefty proportion of his profits to helping the poor. In the public decree accompanying Homobonus’s canonisation, the Pope called him “father of the poor, and consoler of the afflicted”. If only the Pope could see our political parties handing out cheap T-shirts made in China to our poor people come election season, we might have a St Cyril or a St Helen.

Of course, as we know from the teachings of Donald Trump — he who made a small fortune by inheriting a large one — Wealth helps those who are already wealthy. St Homobonus was able to spend his days helping people because of an inheritance from his father, who was already a prosperous tailor and merchant. That’s the thing that worries a lot of people about you, Wealth: you don’t seem very fair about how you spread your largesse. You must really love men like Tim Cook, of Apple, and Jeff Bezos, of Amazon. Cook’s $99 million pay check last year was 1 447 times that of the average for Apple staff. Bezos makes more in one week than the average Amazon employee makes in a year. Truly, they are blessed.

This is an open letter to Wealth, so I feel I can get a little personal. Despite all the sensitive issues around you, such as the fact that, in South Africa, a mere 3 500 adults own more than the poorest 32-million people, I still want to be your friend. I mean, as the prophet Shepherd Bushiri, whom you know very well, has said, being rich is actually encouraged in the Bible. And he should know, speaking from the perspective of his R2-billion fortune. In fact, we all want to be wealthy.

Does everyone want to be crass “I wear two wristwatches at once” wealthy, like Kenny Kunene? Or do they want to be “buy an English football team so that nobody notices human rights abuses” wealthy? No, I don’t think they really want to be either of those. The thing is, Wealth, you mean different things to different people. But whether you manifest as big Wealth or little wealth, you inevitably make lives happier. What we need is more of you, not less. Sure, some people have a much more intense relationship with you than others, but it would be nice if everyone got a chance to welcome you into their lives.