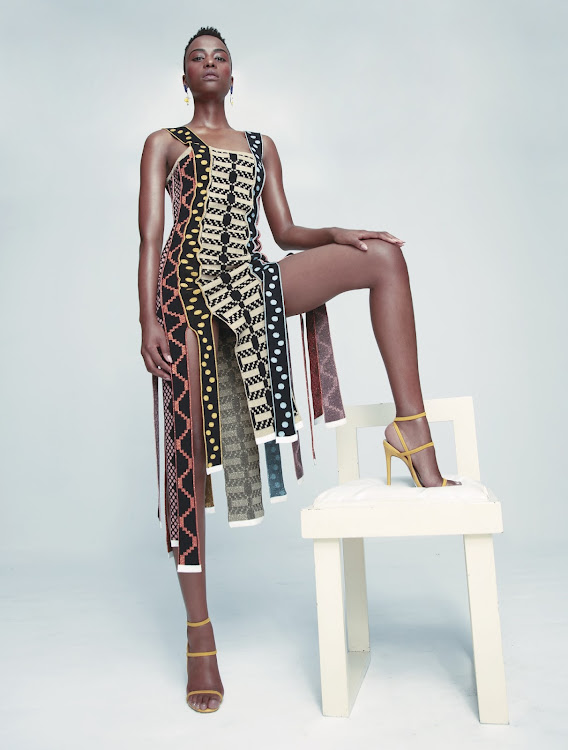 Accompanying her is Tumelo Moema, whom I have known for years and who has been Tunzi’s manager and adopted older sister since her stint as Miss South Africa. These two faces have been a regular fixture on my computer screen for almost two years, in countless Zoom meetings, plotting the then Miss Universe’s life after the crown, during my former life as a consultant. It is the first time I am meeting the 27-year-old from KuTsolo, Eastern Cape, in the flesh.

As we sit down — socially distanced, in matching grey-trousers-and-polo-neck “combos” that later cause mild amusement on Instagram — I am struck by how much smaller she is than I had imagined. Apart from the glut of imagery of her in heels and body-hugging dresses, from camera angles that accentuate form, my usual view of her was her sitting at her desk, in her New York bedroom. Occasionally, roommate Cheslie Kryst, Miss USA 2019, would walk by, waving in the background. On many days, Tunzi would be stuck in that virtual loop for hours: interviews, webinars, sponsors, family — everybody got their time.

We need an alternative narrative for greatness now that life has been turned on its head by the uncertain collective moment of anxiety we’re ...
Voices
10 months ago

Such was the life of a queen during a deadly global pandemic. Not quite what the beauty-pageant gods usually dished up, and her new reality took some getting used to. “In the beginning I was asked a lot what it felt like to be a Miss Universe in lockdown, and at first it didn’t bother me,” she recalls. Covid-19 was new, and the full extent of the devastation and isolation that was to follow hadn’t set in. Loss, a sense of panic, and uncertainty had yet to be personalised. But even as the stoic in her famously urged women and girls to take up space, amid all the darkness, as the interviews piled up, it became a recurring question, and online conversations revolved around the same topic. “People would say, ‘Shame, Zozi is missing out on her reign. It should be extended for at least another year.’

It started sinking in that my reign was going to be different because a huge part of Miss Universe is the travelling and getting to do on-the-ground work, with actual people you can see and touch and engage with.” She found consolation in walks in the park with her partner in crime Kryst, only to return to that apartment and tyranny by way of Zoom.

And then Derek Chauvin knelt on the neck of a handcuffed George Floyd for eight minutes and 46 seconds, until he could no longer breathe. The trajectory of her reign was forever altered. “When Black Lives Matter started, I couldn’t imagine anyone else who would have been able to have the conversations, especially because Cheslie is also Black, and Miss Universe and Miss USA are owned by the same organisation — we always found ourselves in these conversations,” she says. This resurgence of the BLM movement became a reason to engage anew, to be on the streets of New York among the protesters, doek on her head and fist in the air. She was learning while educating, re-igniting in herself a sense of social activism born of her own struggles five years prior.

When in late October 2015 South African youth woke us all from our complacency about the emergency in higher education with #FeesMustFall, Tunzi was a Cape Peninsula University of Technology student on her way to being financially excluded. She recalls marching with other students with a shared sense of betrayal. “It was a heart-breaking time for the youth of South Africa, reminiscent of the past, of June 16, 1976, which was for freedom but also for a quality education. It was heart-breaking to see that, in 2015, students were still marching for education,” she recalls.

People think that this is the only type of hair that you’re supposed to have. That was never the message. The message was always about autonomy. It is about women being able to choose what they want to do with their hair and their bodies

“Here was a new government saying you are free to go to university, to pursue whatever you want to pursue, except it felt like the finish line had been moved a little further once more, because you couldn’t afford to be there. It was a realisation once again of how much more still needs to be done in our country.” If BLM — perhaps the most sustained American popular uprising against racism since the civil-rights movement — was the pandemic social-justice moment for the United States, gender-based violence (GBV) was ours.

The GBV pandemic that has long raged in our country came into sharper focus as women and children — who may have had occasional respite from domestic terror as they went about their normal lives outside their homes — became imprisoned with their tormentors. “Once again, the universe placed me in a place where I could use my voice for impact, even if it was virtual,” she says of her brave and relentless messages of support. In one such instance, ahead of the annual 16 Days of Activism, she wrote: “Every year we plead, we cry, and we march to keep our lives — a human right. So I ask: Is it our souls you want, or a world where no woman exists? Answer me that.”

Crucially, she would deal with abuse on a macro and more personal level — the latter decidedly anathema to celebrity inclinations, especially when others of similar standing are the perpetrators. A case in point is Tunzi’s public call-out of perennial abuse- and rape-accused DJ Euphonik, after he publicly mocked his rape accuser.“ Having Euphonik continuously antagonising the alleged rape victim and making a joke of everything is uncalled for,” Tunzi tweeted in March this year. “I’m sad but not shocked because this is where we are as a country.”

When one moves on from a big job into uncertainty, the weight of the former gig can be all-consuming. I can’t imagine what that must be like for one deemed — in many ways, for almost two years — the epitome of womanhood in the entire universe. When I ask Tunzi how she frames herself, now that her crown sits on another pristine head, she admits it is a question she has been reckoning with that is yet unresolved. “I have been asking myself that in recent weeks, and it’s a tough one,” she says. “I have been this person, in this position for so long, longer than expected. It’s going to take time,” she says. If her short- to medium-term plans point to anything, it is certainly not a crisis of confidence or a lack of ideas, for hers will be a happily multi-hyphenate life, across beauty, media, and social justice. While fate focussed her reign on social upliftment and GBV, her post-crown work will circle back to children, women, and education, passions she has drummed up since her Miss South Africa days.

She has recently emerged as a council member of Nala, a global collective of “women leaders under the age of 40” who are experts in fields as diverse as academia and government, social movements, and entertainment. Their purpose is to “foster, enable, and mobilise” young African women on the continent and elsewhere to bridge the chasm between policy and lived experience, activating tangibly in grassroots communities, the high-level developmental talking points of high-powered forums.

It is an initiative that aligns perfectly with her soon-to-be-launched foundation. “I have always been interested in women, children, and education,” she says. “Through my foundation, we aim to build schools, provide kids with bursaries, and work with small women-owned businesses, supporting them with tools to help them succeed.”

Stories from women around the world inspired another new venture, a “personality and issue-based” podcast series of conversations with “prominent and unknown women, who do incredible work” whom Tunzi met on her journey. As NDAs would have it, she’s less candid about an impending commercial partnership, save to say that her famous face will soon be associated with an established beauty brand. And don’t be surprised if, in that campaign, her hair is not in her trademark fade, as was the case when she donned a wig for a recent Thebe Magugu campaign, leading to a minor international incident on the internet.

You see, once she chose that high top and short sides — and went on to embrace the politics that inevitably come with it — and conquered a world littered with borrowed manes, the hairdo was elevated to a national key point. “People think that this is the only type of hair that you’re supposed to have. That was never the message,” she says, for the umpteenth time. “The message was always about autonomy. It is about women being able to choose what they want to do with their hair and their bodies.

So should African women choose to go out with their natural hair, that should be okay, and if they choose not to, that should also be okay. Should I want to change my hair, I will, without anyone’s permission, just the same way I did then.”

SystemicLogic Group's CEO, Audrey Mothupi, is disrupting business, technology, and even herself