This 'secret history' exposes the outrageously wealthy Sackler family, whose fortune was built on the back of the US opioid crisis 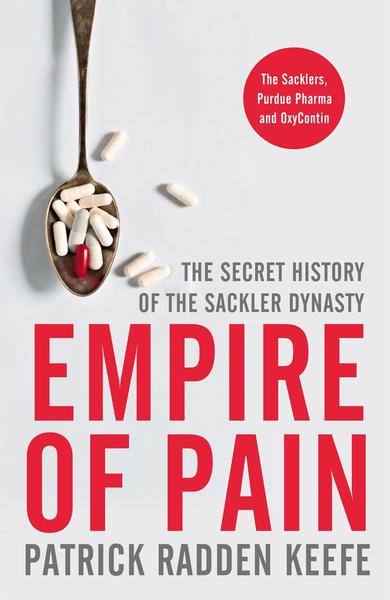 There's no end to the appetite for schadenfreude, even in these compassionate times. Come to think of it, it’s precisely because we are living in these bruised and enfeebled times that our sense of righteousness is at a high and that some antediluvian impulse to bring the high low, to punish the gluttonous, and strip the gilt from self-made gods has reared up.

And when the self-made gods are revealed to have piled up their riches not honestly, or even humanely, but on the backs of the halt and the lame, and, moreover, to have caused the deaths of hundreds of thousands of those sick people; well, then, we will light up our torches and call for a burning.

The story of the opioid crisis in the US has been told in several books and exhaustively reported across the media. By 2019, some half a million people had died of overdosing, but countless more had been ravaged by the ill health and poverty that had resulted from broken families and dead or jailed providers.

Much of this happened in the Rust Belt states, and at least one academic study found that opioids had elected Trump: “Chronic use of prescription opioid drugs was correlated with support for the Republican candidate in the 2016 US presidential election,” this 2018 study by a group of US and Canadian researchers claims. No wonder OxyContin was called “Hillbilly heroin”.

Patrick Radden Keefe is an award-winning staff writer at the New Yorker who set out not to retell this story, but to tell instead the story of three generations of a family and how it has changed the world. Empire of Pain: The Secret History of the Sackler Dynasty (Picador) starts out benignly enough, with a familiar American origin story: three sons born in the early part of the last century into a Brooklyn pulsing with migrants and opportunity. Their parents were both Jewish immigrants who owned a grocery store.

They wanted no less than for their sons to change the world. When they lost their money in the Depression, their father said that at least he had given them the greatest gift of all — “a good name”. Their first-born, Arthur, worked all the hours of the day studying medicine from second-hand books held together by elastic bands, and working a handful of jobs, such as delivering huge bouquets of flowers to glittery Fifth-Avenue apartments.

His brothers, Raymond and Mortimer, followed him into medicine — not as canny or ambitious as Arthur, but solid. So far, so prosaic. But then the Sackler boys went to work as psychiatrists in a sprawling asylum, a grotesque holding pen (think Ratched without the art direction) and, what’s more, they were determined to find a more humane way of treating mental illness than lobotomies and electric-shock treatments.

They started experimenting with drug therapy, chipping in a few dollars each for a rabbit to begin their experiments. Perhaps a rabbit should have become the company logo of the Sackler empire that quickly sprouted. It became an empire built on drugs and — critically — on advertising.

Arthur Sackler basically invented pharmaceutical advertising and influencing: the sales reps, the incentives, the hoopla based on persuading doctors to prescribe their products. He secretly owned the agency that created the ads, and the medical magazines that ran the ads, so he was able to manipulate the message with egregious medispeak and vague claims.

He invented the term “broadspectrum antibiotic”, for instance, and watched it take off. He noticed that Roche was selling more tranquilisers to women, so he heavily promoted their Librium and Valium to women, using the tropes of neurotic singleton, frazzled housewife, and so on. Keefe quotes historian Andrea Tone, who observed that “the portrait Shannon Daniels tranquilizers really seemed to offer… a quick fix to ‘being female’.”

The Sacklers were rich, their ever-changing steel-brushed wives gorgeous, their homes enviable; but no one knew where their money came from

Doctors had never been advertised to before; now they were wearing stethoscopes stamped with Eli Lilly’s logo. When the family bought its own manufacturing company, Purdue Pharma, the Sackler rocket launched. When they developed the painkiller OxyContin, it headed into the stratosphere. Early on, the Sackler name started appearing on walls and wings and galleries on both sides of the Atlantic. There’s a Sackler stainedglass window in Westminster Abbey and the Sackler Library in Oxford.

Throw a stick in Upper Manhattan, and you’ll hit six Sackler-sponsored exhibitions, such as the 15BC Temple of Dendur, donated by Egypt and reconstructed in a wing at the Met paid for by Arthur. The Sacklers were rich, their ever-changing steel-brushed wives gorgeous, their homes enviable; but no one knew where their money came from. This was not charity, as one observer commented, it was philanthropy.

And philanthropy is business. It is branding. As they sank their drug money into the beautiful, the immemorial, the celestial, people across America were crushing up the Sackler morphine pills and snorting them, and when Purdue made them harder to crush, they baked them and zapped them in the microwave and died in numbers greater than all the Americans who fell on the battlefields of Europe. Eventually, the lawsuits started stacking up — 48 states and more than 500 cities had sued Purdue — and the protests staged against them were virulent.

Last year, eight members of the family sat facing 2 500 lawsuits — but of course they weaselled out of them. Massive fines were paid, and Purdue declared bankruptcy while the Sackler billions seem to have been sucked into a Swiss sinkhole. Not surprisingly, the family has scuttled away, to the kind of places W Somerset Maugham called “sunny places for shady people”, like Florida. So, no public conflagration, no Bernie-Madoff-like trial and jailing, no burning at the stake.

Only the creaking sound as the Sackler name gets chiselled off those august walls: the Louvre has erased them, the Serpentine in London too. Harvard, Yale and the Guggenheim are pretending they never existed. The Sacklers may have their money, but that “good name” of family lore is long gone.