Shubnum Khan’s adventures of a lifetime, from travelling the world to having multiple identities on the internet 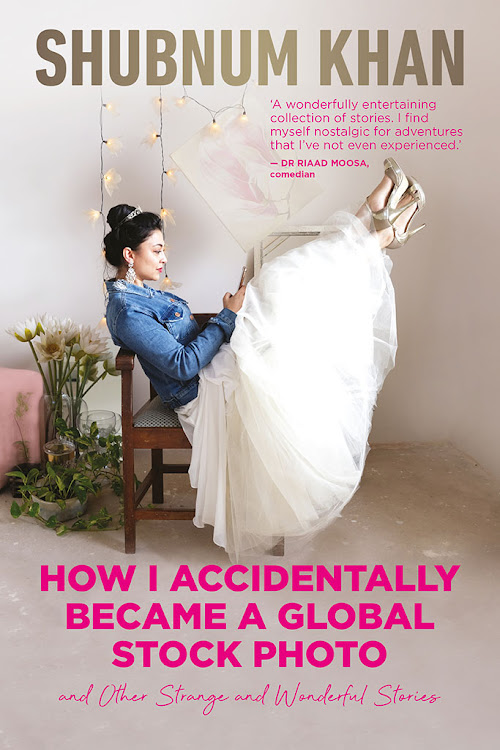 In Doris Lessing’s feminist classic The Golden Notebook the main protagonist, Anna Wulf, refuses to accept the roles traditionally imposed on women by society. She is intent on living a life where she is not defined by marriage, is free to roam and free to engage in political and intellectual pursuits. In the notebook of the title she sets out to find herself, or rather, define herself. Although the book was published in the early ’60s its truisms are still applicable in these times.

That notebook came to mind reading Shubnum Khan’s new work How I Accidentally Became a Global Stock Photo and Other Strange and Wonderful Stories (Pan Macmillan). Here, too, is the notebook of a woman intent on finding and defining herself — in this case a single, Muslim woman from a strict community in Durban.

Khan strings stories like beads on a bright necklace as she travels the world, having managed to persuade her father that a single woman could travel alone. She had had a faltering start in tertiary education, dropping out of architecture and two arts degrees. And when she turned down marriage proposals from an accountant and an actuary, even the most hopeful of aunties lost interest in her. Luckily she fetched up in the media studies faculty, and by 25 had written her first novel Onion Tears and had a master’s degree in English.

She was restless to travel, but forget about a Contiki tour — Khan signed up to teach children in a wildly remote Himalayan village in Kashmir. Never mind the ear worms (yes, there is such a thing in the insect world), the bears, the rabid fleas, and unfriendly djinns — rebel fighting had broken out in Kashmir and the area was tense.

On her way home to South Africa an earthquake struck Delhi and she was trapped in an apartment, the first of many scrapes she would have in her travels. She signs up for writing residencies around the world. She pings from a snooty literary party on New York’s Upper East Side to her first awing visit to a Broadway show. She is appalled to learn that the doors aren’t locked in the house where she is staying on a residency, especially as it’s in the area where The Blair Witch Project was filmed.

She travels to Fez and meets an older French woman happily touring Morocco by herself. Khan is constantly told that as a single woman she is destined for a life of sadness, yet here, she writes, was this fabulous woman who travels the world and had even been on Hajj (Islamic pilgrimage) by herself. She lands another writing residency in China but is petrified by the strangeness of it all: the food, the bitter cold, the state police. But she is liberated, too, because women are safe to walk everywhere, without “the invasive gaze”.

In Shanghai she gets drawn into a bizarre shoot of bridal gowns on a rooftop; in Seoul she stumbles on the only mosque in the city and collapses in tears; and in Turkey she is swept up in a lavish press junket. In New York she is once again locked in an apartment; in New Mexico she is haunted by dead souls and the tokoloshe.

Along the way Khan keeps up a gently funny interior monologue that is less Jiminy Cricket than her mother’s voice in her ear. When you’re travelling alone, she writes, “There’s no one to turn to and urgently whisper whether they think you’re allowed to bring the chicken samosas and steak pies packed away in foil in your giant handbag.”

The most astonishing story of all is, of course, the title one. A few years ago a friend in Canada posted an advert on Facebook that she’d found in a newspaper. It was Khan’s face, and at first she was mystified as to how it had got there. Khan remembered she and a friend had taken part in a photo shoot in Durban titled “100 Real Faces Project”. They’d thought it was a lark and they’d get a professional photo out of it. They didn’t realise the arbitrary form they’d signed entitled the photographer to sell their portraits as global stock photos.

Horrified, Khan reverse-searched the image and uncovered countless adverts: “I was in eye-cream, skin-lightening, make-up, pigmentation, acne, laser, and dentistry adverts. I was in adverts for banking, insurance, advertising, management, and teaching. I sold carpets in New York, travel packages in Cambodia, and promoted immigration in Uruguay and Canada. I graced magazine and textbook covers. My name, nationality and race were altered at whim; I was Bonney Seng in Cambodia, Phoebe Lopez and Chandra S in America, and a woman looking for her ‘knight in shining armour’ on a French dating website in Morocco.”

Her story went viral and soon she was doing interviews with news desks all over the world; she went on CBS, on the BBC, and CNN, and even Monica Lewinsky retweeted it.

Not surprisingly, she had something of a meltdown. What really worried her were the ads that involved children. She gives a “testimonial” on a foster-care site and is listed as a teacher on an online-teaching website. “Who is caring for and teaching those children?” she asks.

Although she managed to persuade the unrepentant photographer to take down the photos, they continue to pop up.

This is a vivid and intimate collection — and a brave one too — as Khan lays bare her inner self. She was trying, she says, “To find a path to myself again,” and paraphrases Kurt Vonnegut: “Out on the edge you can see all sorts of things.”