Sarah Buitendach: I’ve made my bed, now I’m lying in it — all day

Wanted's 'retired' editor is kicking off her time-out in bed — and loving it! 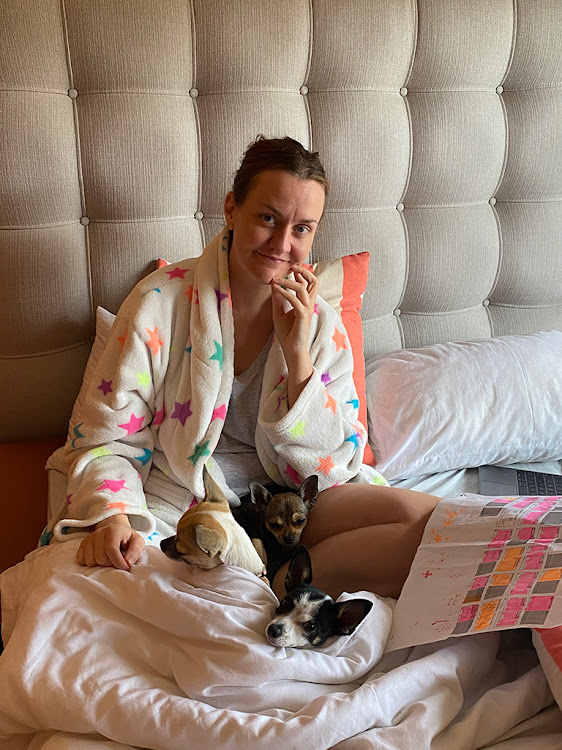 In another world, being on a mid-career break or sabbatical (I haven’t settled on an official term) should probably mean jetting off somewhere the minute you close Outlook. By the divine rules of whichever god is in charge of such work pauses, I should probably be self-actualising along the Camino de Santiago right now; or silently being at one with an ashram or Elizabeth Gilbert, the rosy glow of transformation beginning to lighten my aura.

In a pandemic, and with us very much not being able to escape almost anywhere, I’ve kicked off my time-out in bed.

Those of you who know me will ask, “But aren’t you a bed worker too?” The answer is yes — for years, since studying for exams in high school — I have considered the place where I lay my head to also be the place where I write, reply to emails, take phone calls, and everything in between. Covid-19 merely intensified my reliance on the boffice (bed-office) as it morphed it into a meeting room and canteen too.

I am not alone. In fact, one might argue that, post-virus, we boffice workers are where it’s at. A US sleep-research unit called Tuck Sleep recently found that, out of 1,000 people polled, 72% of them said they were now working from bed. One in 10 were conducting their entire week’s slog from it.

This study, and a slew of others, pronounce this new phenomenon to be bad news; for your back, for your sleep, for your psychological well-being, for the person sharing the sheets with you, and so on. Whatever. I have long known that the wonderful American novelist Edith Wharton, most famous for The Age of Innocence, favoured her pillowed workplace as a prime writing spot. This seems mighty aspirational. A mild google also revealed that those prone to being productive whilst prone included Mark Twain, Winston Churchill, and Truman Capote.

Tuck Sleep recently found that, out of 1,000 people polled, 72% of them said they were now working from bed

Plus my posture seems largely OK-ish, I bed alone, and, anyway, it’s not the working from my extra-length HQ that was stressful — that’s got to be attributed to work in general.

On the personal front, this justification is moot anyway. For now, at intervals on any given weekday, you will find me reclined on the king-size, under the glorious Welsh blanket that I schlepped back from Labour and Wait in London as hand luggage, Loads of Living pillows piled up and bolstered around my shoulders like a fort. I have a bunch of books, Netflix, and a view of Joburg’s changing treetops and incomparable sky. Hadedas and the thwack of school kids playing hockey next door are the soundtrack.

There are mostly no deadlines to be met and zero Zoom calls to jump onto. It is a wonder. Now I get to daydream and switch my mind off completely. Perhaps I will grow tired of this lounging, but for now it is an indulgence I’m fortunate enough to be taking for a spin. A little snooze, midafternoon, in the sun — I cannot think of anything more luxurious in the entire world.

There’s no escaping to the Italian countryside or a beach in Bali, so earlier in the week, in a state of unreserved recklessness, I had a lie down on my spare-room bed. After all, you know what they say about change.

• Buitendach is the former editor of Wanted and is a contributing editor to the Financial Mail (when not snoozing in the sun).

Your wellness forecast for the new year, when luxury will be synonymous with slow, sustainable living and self-care
Voices
1 year ago

Ignore the social-media opinionistas and general know-it-alls, these are the great minds who're worth listening to
Voices
1 year ago

On the hunt for the best bed linen to dress your bedroom? Here are the brands to put on your radar
Fashion & Grooming
2 years ago