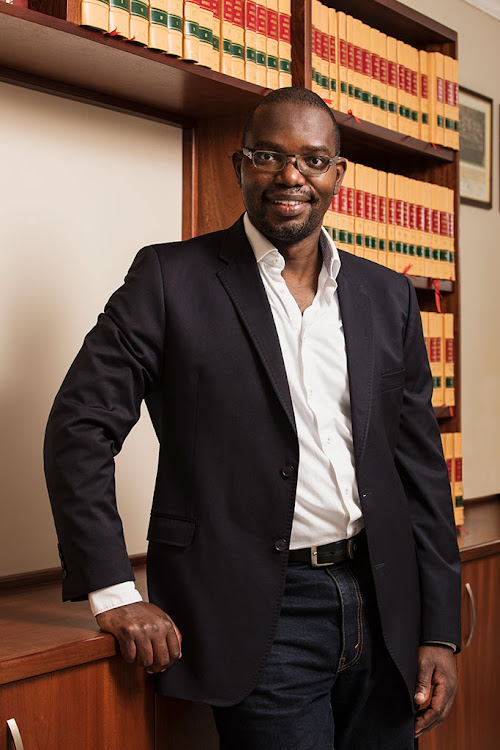 Ndumiso Luthuli has been described by colleagues and friends as magisterial. That is only the half of it. He has a discreet charm underscored by a presence of mind that belies his age. He has the gravitas of an elder statesman paired with a lightness of touch that makes him eminently credible and approachable. Basically, this is a man you want batting for your team.

The advocate and national secretary of the Rhodes Scholarship in South Africa is the kind of level-headed leader any institution, never mind one as freighted with the heavy baggage of history as this one, could use.

Luthuli’s path, from Ndwedwe in rural KwaZulu-Natal via Inanda — an informal settlement where his mother, a domestic worker, sought work closer to the city — back to the village for high school to avoid the violence of the late ’80s and early ’90s, and on to the University of Natal for his LLB, is impressive enough.

As a young man, Luthuli did not fully appreciate what the Rhodes Scholarship, for which he had applied, was really about. So he gave up the final interview to take up the Abe Bailey Travel Bursary. (No handy Zoom technology in those days, which made the 2020 interviews and the entire scholarship process a remote experience.) “I had never been out of the country, or out of KZN for that matter, so I chose the three-week tour of the UK. It seemed a much more tempting prospect than the Rhodes final interview. I did not understand what it was all about until I was on the tour. We visited London, the Old Bailey, Stratford, Scotland, Cambridge, and Oxford. We met Rhodes scholars, and that is when it hit me — the mammoth opportunity I had given up.”

It was a call from Dr Tim Nuttall, the then-secretary of the KZN Rhodes selection committee, wondering how his tour had gone, that cemented Luthuli’s next steps. Luthuli had not finished his first sentence when Nuttall, using some choice words, encouraged him to try again the following year. It is probably testament to the calibre of young man that Luthuli was that the second chance paid off — he went on to read for a bachelor of civil law and an MBA. It was an experience that Luthuli says is hard to convey in words: “It was intense but I managed to do quite a bit, to make friendships that will last a lifetime. I met Alisha (Wade, a Rhodes scholar from Barbados) — my future wife.”

He played soccer and even a spot of very amateur cricket. “We cobbled together a business-school team that challenged Cambridge Business School. Great fun.” He says, “One of the things I try to encourage Rhodes scholars to do is to try to find some balance. The Oxford experience is not just about the classroom; it is such a fantastic environment where such a cross-section of fascinating people from all over the world coincides and you are exposed to such interesting debates, clubs, and societies. There is so much you can learn and allow you to forge an impact on the world outside of the classroom. I crammed in as much as I could, the experience is transformative.”

One of the things I try to encourage Rhodes scholars to do is to try to find some balance. The Oxford experience is not just about the classroom. I crammed in as much as I could, the experience is transformative

His only regret is not taking up the opportunity to study for a further year, as family pressures brought him back. Before being admitted to the bar, he worked in investment banking and set up his own law firm in Durban. This path ensured a smooth and happy transition for him: “I came to it quite late, but I had accumulated a lot of experience that has helped me to a very quick start at the bar. It is such a pleasure to be working with some of our leading minds on some of our most interesting cases. I have really enjoyed the experience.”

Full disclosure: I have been a member of the Gauteng Rhodes Scholarship judging panel for three years. The term is for five years and it has been a remarkable honour and a steep learning curve. I am struck, each time, by the astounding talent in our country and the huge issues raised by the very scholarship that presents so much opportunity. It is the irony of the Rhodes Scholarship that it is both one of the most prestigious scholarships of its kind in the world — with alumni who span Nobel laureates, leaders of state, and marvellous minds that have altered the course of humanity — and that the endowment itself has its roots in the colonial enterprise and all that it entailed.

Of this all, Luthuli is characteristically diplomatic. He tells me that, interestingly enough, Rhodes never chose to name the scholarship after himself. He had called it the colonial scholarship — which I feel grateful did not stick for very long. The name was settled on by the trustees. “The scholarship has established a global name for itself, it is separate to Rhodes. The trust is not a custodian or a supporter of his world view, the scholarship stands on its own. And the Rhodes-scholar community has been, globally, I believe, a force for good for over 100 years,” Luthuli says.

He says it is fascinating that, around the world, many people don’t associate the Rhodes name other than with the prestige of the scholarship itself. Though, naturally, the sensitivity is understandable in Africa and Southern Africa in particular.

Luthuli’s personal ambition for his tenure as the national secretary is driven by very practical pursuits. His first priority is to encourage the trust to assign more of the over 100 scholarships awarded annually to the African continent. In South Africa he is engaged in discussions to review the eligibility for the scholarships reserved for certain schools. And, most importantly, he is working on outreach. He would like to spread the word about the opportunity the Rhodes Scholarship presents and to encourage and find more young scholars to apply. Potentially without having to travel to Oxford first to realise what a wonderful opportunity the scholarship offers.

Ndzaba's passion project, Khayelitsha's Finest Wines, is a side hustle to sip and savour
Voices
1 year ago