Crazy adrenaline: Nobody does it better than audacious Swiss manufacturer Roger Dubuis 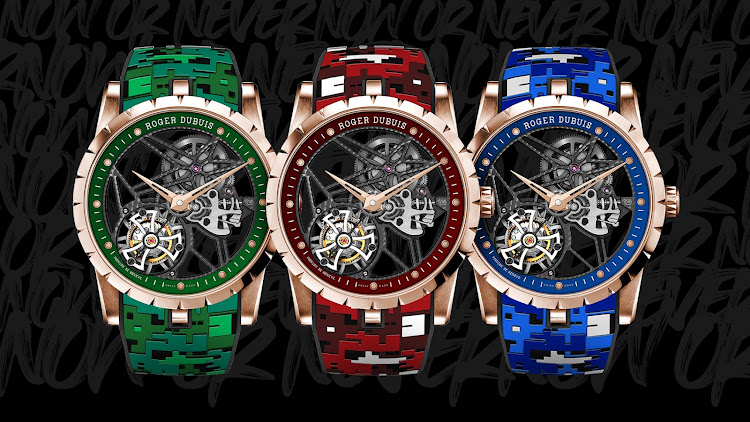 Supercalifragilisticexpialidocious. If these were the ’60s, and Roger Dubuis was already a leading watch manufacture, it may well have found synergy with the word that means “extraordinarily good; wonderful”, according to lexico.com. It’s from Mary Poppins, of course, the 1964 Disney classic about an “out of this world” English nanny with magical powers and an umbrella that doubles as a parachute.

But this is the 21st century, so swop the brollie for a Lambo, replace one of the longest words in the world with the Latin “superbia” meaning “excess” or “going beyond”, where Roger Dubuis finds synergy, and you get closer to what I see as commonality — in wordplay at least. Movie buffs and watch aficionados alike will recognise the unparalleled “pleasure, madness, and freedom” evident in both artistic enterprises. “Excess is a very strong word, so we chose three more to expand on that idea. These are the big elements in everything Roger Dubuis communicates and represents,” explains CEO Nicola Andreatta, who lives and breathes the 25-year-old brand.

“Crazy” is a word that punctuates our interview. The Mary Poppins character is the last person they would imagine a connection with, but it speaks to their commitment to no limits. The typical Roger Dubuis client does not exist. “It’s not good to limit ourselves or our clients with regards to what they can choose or can enjoy. Why segment their taste? If a man can wear a tiny watch with a big strap, a woman can wear a super-technical watch in a 47mm case. We talk more about sizes for our watches now, not gender. The smallest one we work on today is 36mm,” he says.

Richemont appointed Andreatta as Roger Dubuis CEO in December of 2018. It’s difficult to imagine a better match. A sportsman with a preference for extreme sports, he raced rally cars and (motor)bikes for a number of years in his youth. He also has scuba diving and skydiving licences and is a certified pilot. “I love fast cars. I am addicted to adrenaline. I have been doing extreme sports all my life. I just enjoy strong emotions — that’s what you need to lead a company like Roger Dubuis,” he says.

Andreatta sees the high-speed partnership between Roger Dubuis and Lamborghini, geared to produce “raging, adrenaline-charged masterpieces”, as a gift to him in his current position. “I remember when I was 12 years old, I went with my father to my first Grand Prix at Monza. We were sitting very close to the last turn. When I first heard the Ferrari coming out of it, with that high-pitched scream, I started crying. It’s something that gets into your body. That engine so loud, and that sound — it’s something amazing,” he says. 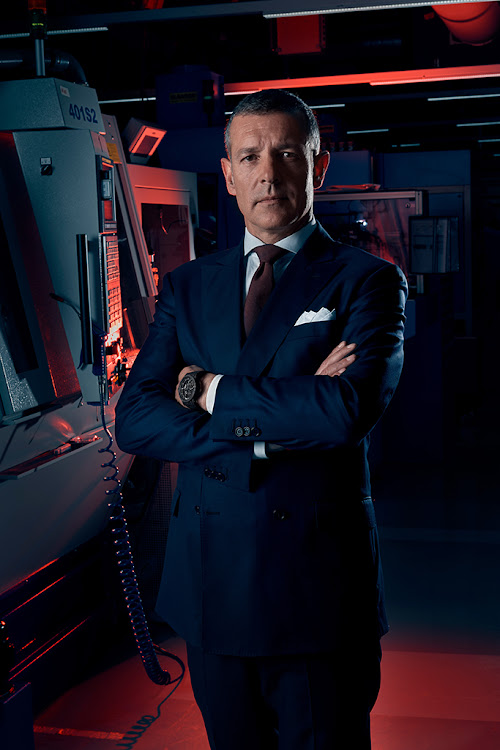 He reflects on his experience at the finals of the Lamborghini World Final 2019. “They gave me a super-profile racing car to test on the last day. I did nine laps. It felt like I went back 10 years when I was racing! I spun a few times, because my driving is a little rusty, but I adapted. I felt close to high when I came out of that. It’s difficult to explain – such a passion, not everybody understands it.”

Andreatta was born in Italy in 1973. Exposed to watchmaking from age five, he loved to accompany his father to work at a watch factory that manufactured cases. He was amazed that a piece of metal could be modelled by hand and machine to “get something crazy at the end like a timepiece”.

“My father actually manufactured the first cases for Roger Dubuis. I met Roger himself, because I was travelling and working with my father when I was very young. We used to travel to meet our clients in Geneva, and they were all Roger Dubuis clients,” he says. “I remember discussions about the craziness of the brand, about the different approach they had to high-end watchmaking. I was always fascinated by that.”

It wasn’t long before Andreatta started working on the machines, and making his own cases, but his father did not want him to make it a profession. He had to study finance, something he understands but is not passionate about. “At the end of the degree, my father said: ‘Now what?’ and I said, ‘Now I want to make watches!’”

Andreatta did just that in Hong Kong for five years, where he designed and marketed watches and managed the building of an assembly line in China. “I am in love with high watchmaking and high complications — that’s where you can really express yourself. You have endless possibilities, because you are not limited by price point or by the development process. At Roger Dubuis, we’re a smaller company, so I’m still involved in every step. I want to know where we are going to start, [which direction we are headed], and then I let them work. I am so lucky to be working with this product.”

Andreatta sells too. When he meets clients and partners, the first thing they want to know is what he is wearing on his wrist. So, he came up with the concept of the CEO watch: a limited-edition piece that he wears every day and that only he can sell. It has to be something particular, a bit different, with a specific calibre that dictates the size. He chooses the combination of colours and materials and personalises the movement with his initials. Buyers can have their own inscribed. “I can’t fall too much in love with our creations. I want to evolve our novelties each year. My favourite watch is always the one we are working on,” he says.

At the time of the interview, it was the Excalibur Superbia. The complexity of this creation took an incredible amount of work and consumed a lot of resources in the two years since Andreatta took the lead. “It well represents the excellence of Roger Dubuis, not only in design but also technicality. We present a little bit of everything in that watch,” he says. 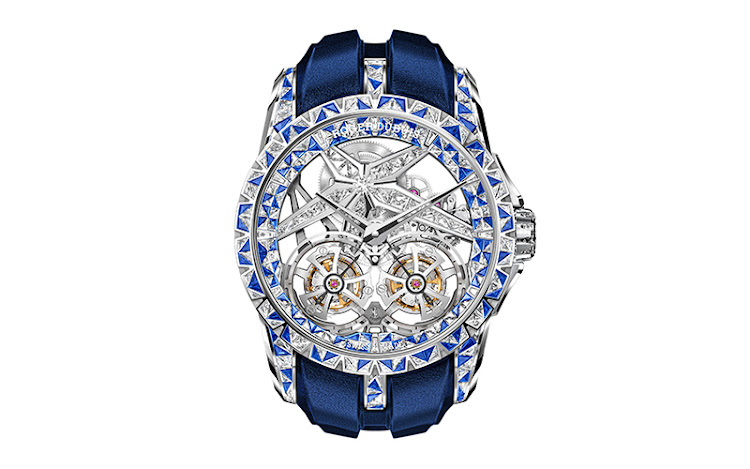 In brief, the masterpiece features two flying tourbillons in a manufacture skeleton calibre. The tourbillon carriages are made of titanium and achieve a power reserve of 72 hours. One differential links both tourbillons for improved precision, while a new lubricant increases durability and ease of service. For the first time in what the manufacture calls “hyper horlogerie”, the case is set with triangle-cut gems using an invisible technique on a curved surface.

Roger Dubuis purposefully plays with watches, and the way it communicates its narrative. It’s called  “the adrenaline factor”, which epitomises the brand’s connection with Lamborghini and Pirelli, as well as seniority — its second pillar of expression. “It has to do with extravagance. Everyone should be able to express themselves, and we want to be even more expressive with our proposal. These two different worlds of Roger Dubuis are very close to who I am,” says Andreatta.

“Most of the time we start a project without knowing what we’re going to get. We start with ideas, try to see if they work, and begin a two-year journey. Our product director Gregory Bruttin might get a crazy idea while we are having lunch together. Suddenly he will run away with an idea that he’s written on a paper towel, then he will come back and say he has just invented a new movement. That’s the way we work here,” he says.

When they’re working on a new concept, the team workshops the story behind the watch they have yet to dream up. They brainstorm to bypass the limits they set themselves. For example, how do they create a material that is white, manufacturable, and machinable? The result was the white composite material used in the Excalibur Two-Fold released earlier this year, another first for haute horlogerie.

“We come up with the crazy idea to design this incredible timepiece and then we say, ‘Ok, who can make it?’ When we started the process to find a supplier to cut the triangular stones for our Superbia, they all said they didn’t want to do it. In the end, we had only one who wanted to work with us, which is also a limitation. We have to find people as crazy as we are to work with us!”

Debbie Hathway talks to living legend Kurt Klaus, one of the main influencers of the fortunes of Schaffhausen-based watchmaker IWC
Voices
1 year ago

Debbie Hathway talks to Parmigiani CEO Davide Traxler about their new timepieces, and keeping the fire alive
Voices
1 year ago

Make your mark with Montblanc’s new collections of soulful timepieces

Montblanc has launched new pieces in three lines this year. Davide Cerrato, managing director of Montblanc’s watch division, tells us more
Voices
1 year ago
Next Article
Commenting is subject to our house rules.
© Wanted 2022 - If you would like to reproduce this article please email us.