One week, you are thinking it’s all fine. Then, in no time at all, you are not sure when you’ll see your children again, explains Lukanyo Mnyanda 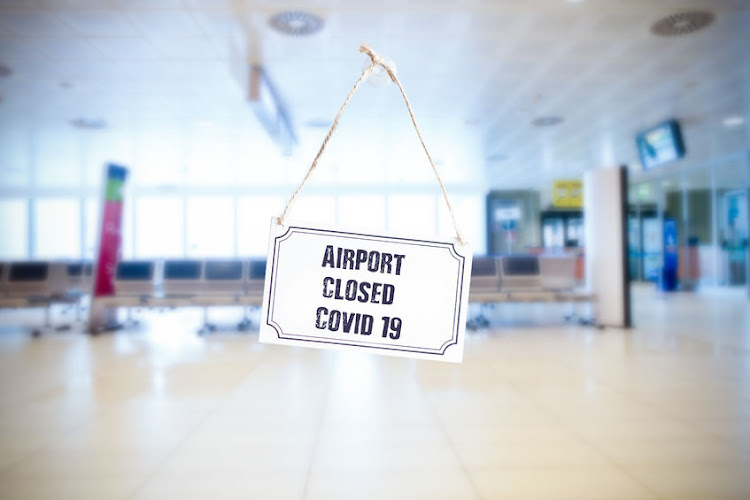 Canceled flights due to the spread of the coronavirus.
Image: 123RF / Fabio Balbi

As I started writing this, I began to won­der whether I’d be in Europe or not by publication day. By the time I had finished, the answer was crystal clear. The com­puter said NO.

Not only was I not able to go to the UK, but a trip to Port Elizabeth was also out of the question unless I was prepared to drive almost 11 hours, preferably by myself, without any stops.

That’s how quickly the coronavirus panic has spread. It seems like an age ago that it was a curiosity out of China. It was still concern­ing, but in a distant way, just like when you turn the TV on and see a story about floods in Bangladesh or hurricanes in the US. Even when the disease started to spread across the world and the extent of the crisis in Italy became evident, it still didn’t feel so real.

Donald Trump was still downplaying it, while at the same time authorities in the UK were approaching it rather casually, even suggesting that a rise in infections might not be a bad thing as it might build immunity among the population, especially the younger ones. The elderly, it seemed, were to be left to their own devices.

One thing can be said about our government, which often, and rightly so, attracts its fair share of criticism, is that its approach didn’t display such compla­cency. Health minister Zweli Mkhize was proactive in communicating with the country’s population from when the first case was reported to President Cyril Ramaphosa’s 15 March announcement of drastic mea­sures such as a travel ban on foreign nationals from high-risk countries, including the UK.

Up until this point I had been thinking of repatriating my UK-based family.

One week, you are thinking it’s all fine;
the epicentre is China
and they seem to be getting on top of it

To say the required mind change has been surreal would be an enormous understatement. One week, you are thinking it’s all fine; the epicentre is China and they seem to be getting on top of it. And then it explodes in Italy and you wonder whether you can travel to Europe. Then, in no time at all, you are not sure when you’ll see your children again.

As at the time of writing, I still have no clue. There is little light at the end of the tunnel and it’s difficult to avoid panic, imagining what could happen if and when the virus spreads to South Africa’s poorer areas where self-isolating is near impossible.

Even being told that we are not Italy, where the spread has been aided by its much-bigger proportion of older people among the population and its more con­centrated living conditions, was of little or no comfort.

It still remains to be seen how this will change parts of the population for whom international travel had become routine, and for the globalised economy, with its interlinked markets and supply chains. In this era of globalisation, high-speed internet, and Skype, having families across borders had stopped being such a strange concept.

When I decided to try it out a couple of years ago and leave my family in the UK, the havoc unleashed by the coronavirus was the last scenario I would have imagined — something more akin to a dystopian movie. And if anyone would have told me that it was remotely pos­sible, I would have laughed in their face. But I’m not laughing now.

Lukanyo Mnyanda: Trying to spend the bucks on the Bucs

Buying a replica jersey of a local soccer team for children is a nightmare, explains Mnyanda
Voices
1 year ago

Lukanyo Mnyanda on airline mix-up's, all the while trying to make it back to Johannesburg in time for a concert
Voices
2 years ago