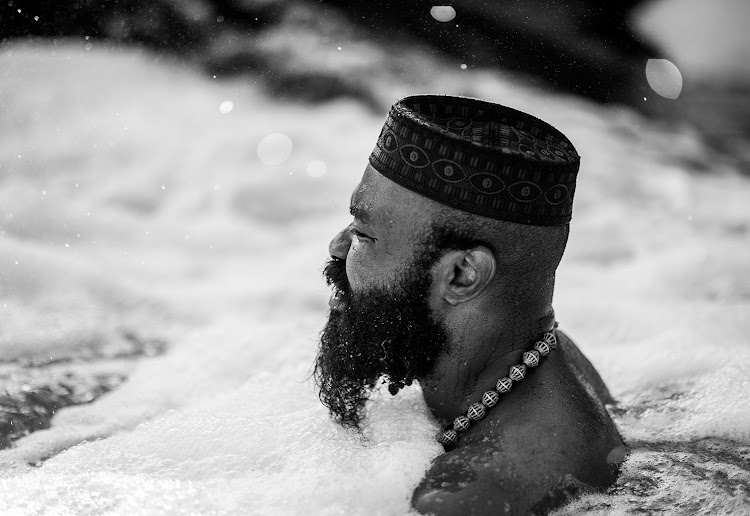 “We love this man with an uncommon depth… when he walks into a room, soul walks in with him.” These were the words of American virtuoso trumpeter Wynton Marsalis in his introduction of multi-award-winning South African musician and Blue Note artist Nduduzo Makhathini to a Joy of Jazz festival audience last year. Makhathini had joined the Jazz at Lincoln Centre Orchestra in paying tribute to the music of American pianist and composer Duke Ellington.

If you’ve been unable to witness that entrance in person, you only have to hear Makhathini put fingers to keys to get the picture. His work has grabbed my attention repeatedly as I’ve scrolled through his Instagram feed to get a sense of the man and his music, and followed the journey to the launch of his Blue Note Records debut album, Modes of Communication: Letters from the Underworlds on 3 April this year. When he plays, there is little choice but to tune in to the moment and the message.

Makhathini’s new album boasts a global hit list. It includes the likes of US saxophonist Logan Richardson and bassist Zwelakhe-Duma Bell Le Pere. South African collaborators include tenor saxophonist Linda Sikhakhane, trumpeter Ndabo Zulu, drummer Ayanda Sikade, and both Makhathini’s wife Omagugu and his daughter Nailah on backing vocals. Senegalese percussionist El Hadj Ngari Ndong features too The band’s Pan-Africanist outlook is deliberate, underpinning Makhathini’s desire for music performances to be “a space for conversations that open a discourse of African histories that reside beyond the borders of this continent”.

For Makhathini, performance is about connecting the histories of South African jazz, unknown to many people worldwide, to this jazz portal that Blue Note has created over the past eight decades. Founded in 1939, the iconic American musical label’s artist list reads like a constellation of past and present musical supernovas: John Coltrane, Elvis Costello and The Roots, Lena Horne, and Miles Davis included.

Jazz in SA dates back to the 1920s. Reuben Caluza wrote ragtime songs in Zulu in the 1920s and 1930s. Makhathini learned about him in a book called African Stars: Studies in Black South African Performance by Veit Erlmann, Philip V Bohlman, and Bruno Nettl. “That’s just a few years after jazz was ‘invented’ in the US. People often think about music on this continent as something that emerged from the echo of the broader narrative of jazz in the diaspora. One of my views is that we have to consider a kind of parallelism as well. Some of these things are already embedded in our cultural concepts. If you think about traditional ceremonies, in a precolonial sense there were already aspects of improvisation, call and response, syncopation… these are all signifiers of what people call jazz today.”

The spaces I like playing at are those that connect us to origin and identity, where we can tap into something deeper than this very moment

A human being first and foremost, Makhathini also describes himself as a father and husband, somebody’s child: “They all define who I am but in the artistic world, I present myself as an artist, healer, improviser and scholar,” he says. Makhathini is a practising sangoma.

As for style, he favours a working definition above a specific genre. “It’s ‘our music’. That way it embraces your history, your ancestry, the fact that it’s not yours alone… there are other contributions made by other people.”

Similarly, he prefers to play in spaces that stand for something. “Space is a kind of energy bank and space has memory, so the spaces I like playing at are those that connect us to origin and identity, where we can tap into something deeper than this very moment. Early last year I played at Blue Note in New York. John Coltrane and Thelonious Monk have played there. I felt my performance was connecting with the histories that this space carries,” says Makhathini.

He feels similarly about performing at “Africa’s grandest gathering”, the Cape Town International Jazz Festival. “Some of my heroes have played there. Around 2007 I played with Zim Ngqawana (flautist and saxophonist),” says Makhathini. “John Mbiti, the Kenyan writer, says the only way an ancestor continues to live in an ancestral realm is through the vocalisation and chanting of their names. Playing at the Cape Town International Jazz Festival was not just about the excitement of playing for a big audience. It was also about immortalising the invisible histories embedded in these spaces. On a deeper level I connect with those memories.” Of course, he’s disappointed that the festival had to be postponed due to the coronavirus pandemic. “It came with great sadness to read about the postponement, especially because it is in the moments of fear, confusion and sadness that people should gather. But one understands that large gatherings present huge risks. Meanwhile let’s all keep safe.”

LISTEN | Nduduzo Makhathini's Unyazi from Modes of Communication: Letters from the Underworlds album:

As current head of the music department at the University of Fort Hare in the Eastern Cape, Makhathini juggles touring, teaching, and family life with relative ease. He is currently doing a PhD on artistic practices. When he travels to a gig it is part research and part internationalisation for the department. He pairs all his performances with the presentation of an academic paper or a workshop. “I always felt there was a connection between being an artist myself and someone contributing to the development of some kind of abstract idea of tomorrow, and how artists can contribute to that picture. I see it as part of the work that I have to do. Because of that energy, time avails itself.”

• Modes of Communication: Letters from the Underworlds is available on all good music portals.

So who is this producer and showrunner extraordinaire? Ditsele explains to Pearl Boshomane Tsotetsi that he is just a guy who likes telling stories ...
Voices
2 years ago