Splendid isolation: Seven things to binge watch during the lockdown 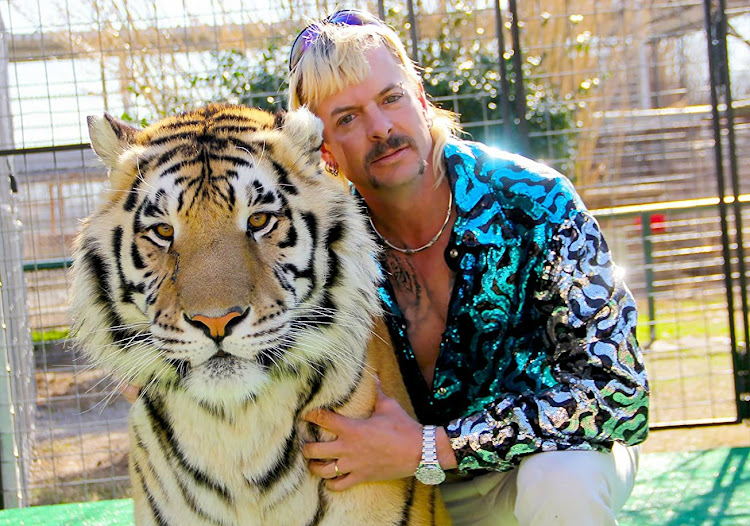 Joe Exotic with his tiger, from 'Tiger King'.
Image: IMDb / Courtesy of Netflix

Disappear down the YouTube rabbit hole. Users of the video-sharing platform upload more than 400 hours of content ever minute, so there is little chance of running out of options. You can pretty much watch anything on YouTube, as long as it abides by their stringent copyright laws, but here are a few choices to keep you hip, informed, and up with the cool kids.

NPR Tiny Desk Concerts is a video series hosted by American National Public Radio, and is exactly what the name implies; musicians performing a concert at a small desk. It’s a great place to see up-and-coming artists, as well as some big names perform and talk about their music. Taylor Swift loves it so much she calls it one of her “favourite corners of the internet”, and, as we know, if TayTay says it, it must be true.

In the vlogging world, David Dobrik is the name to know. This 23-year-old Slovak-American YouTuber boasts a following of 15-million subscribers and a net worth of $7-million. Dobrik creates regular four-minute-21-second videos focusing on his crazy life and the antics he gets up to with his fellow YouTubers, The Vlog Squad. After watching one video, you will wonder what all the fuss is about; five hours later and 70 autoplays in, you’ll still be wondering but somehow won’t be able to stop yourself from watching.

For safe voyages of discovery, The Luxury Travel Expert posts regular vlogs of his own travel experiences including reviews, advice and travel lists. The video tours of Business and First-Class cabins on various airlines are definitely worth watching before you plan and book your next adventure (when it’s safe to travel again, of course).

Trying to explain to someone why YouTube reaction videos are so watchable is near impossible. You just have to glimpse them to understand. Essentially, you are watching a short video of someone reacting to something like a film trailer, TV show, music video, prank, craze, or song. We told you this one sounds like a stretch. For some reason though, it’s addictive. Our choice: Steven in Stereo, a die-hard music fan who reacts to music videos, live performances, and albums of musicians from an array of genres. – Jo Buitendach

5. WHAT WE DO IN THE SHADOWS

Come April, the latest season of US series What We Do in the Shadows will be out. If you’ve never seen this little gem, you’re missing out. But let me take a step back to the beginning first. In 2014, a Kiwi movie of the same name was released. It was directed by and starred the now-extremely-popular Taika Waititi (Jojo Rabbit, Thor Ragnarok) and his mate Jemaine Clement.

WATCH | What We Do in the Shadows trailer:

It basically followed a bunch of vampires (made undead over various centuries) living in modern-day, very humdrum Wellington, New Zealand. The bizarre, deadpan mockumentary was a sleeper hit that now has a huge following. Last year, the pair reunited with a new team to make a US series based on the original film. State-side, a different bunch of vampires live in Staten Island, New York. Laszlo, Nadja, Nandor the Relentless and their housemate Colin Robertson — he’s an energy vampire (we all know a couple of those, don’t we?) muddle through modern life and the result is hysterical.

Binge watch the movie, the first season (on Showmax) and then the latest episodes in one go. It’s spook-tacularly good fun. – Sarah Buitendach

Initially, this might seem like an average adolescent drama, but after episode one, you realise that the dark subject matter is oddly relatable — no matter your age. Based on Charles Forsman's comic book series of the same name, it follows two 17-year-old outcasts who navigate their way through the shit-show they call life, hoping to find “belonging”.

James (who thinks he might be a psychopath) and Alyssa (who is incredibly blunt, at times vulgar, and bored of life) both come from broken and dysfunctional homes and together get into a world of trouble. You can't help but agonise for them but berate them, all the same. It's smart, unpredictable, funny and heartbreaking. The series manages to both draw you in emotionally and cut you off with its wry British humour almost immediately (and who doesn't love a good British drama?).

WATCH | The End of the F***ing World trailer:

It's a sleeper hit, which is a shame because it really is brilliant. Now that you have more time on your hands, get stuck in. Seasons 1 and 2 are both on Netflix. – Katharynn Kesselaar

I'm sure by now you've seen Twitter and memes alight about Tiger King. Almost as if planned, Netflix dropped the original series mid-pandemic and viewers have not been the same since. Seriously, I am still reeling over what I saw and am struggling to make sense of it all.

Without giving away too much (if that's possible — the storyline is jam-packed with plot twists and events), Tiger King is a true-life crime docuseries that follows charismatic but flawed Joe Maldonado-Passage's life as a gun-toting big-cat zoo owner in Oklahoma and his downfall. It is, quite literally, mental.

It’s got murder plots, tigers, missing husbands, polyamorous relationships, drugs, guns, country music, presidential campaigns — hell, it's even got a montage of a dude on a jet-ski. There isn't much the series doesn't have.

The expression, "you'll believe it when you see it" doesn't quite fit here because, even after watching it, you'll be in disbelief. All I can say is, just watch it. Be amazed — and perplexed. It's brilliant. As country singer BJ Barham says, "It’s like a train wreck you can’t look away from. You know you shouldn’t like it or approve of it, or even want to see it, but you can’t stop watching it." – Katharynn Kesselaar

Social distancing? Four reads to catch up on while at home

Avoid overworking yourself, and make time to be idle ... Seriously, it's the way forward
Voices
2 years ago

Start the year off on the right page by adding these must-read books to your list
Voices
2 years ago
Next Article
Commenting is subject to our house rules.
© Wanted 2022 - If you would like to reproduce this article please email us.