Lukanyo Mnyanda: Trying to spend the bucks on the Bucs

Buying a replica jersey of a local soccer team for children is a nightmare, explains Mnyanda 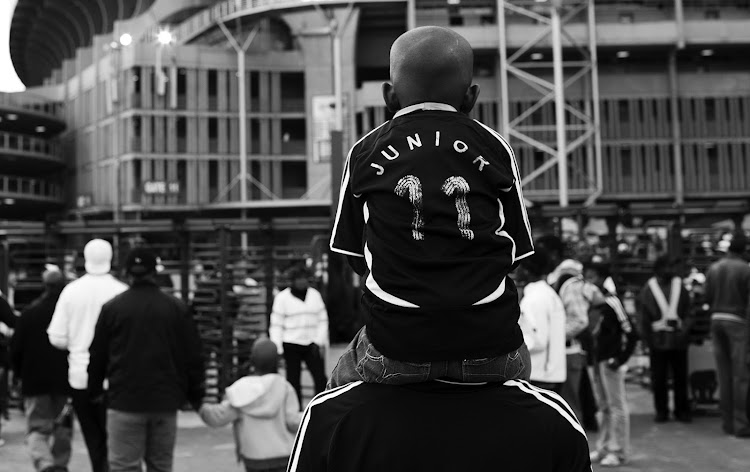 Shopping for a replica jersey is a nightmare if the person you are looking to buy for is of the younger generation.
Image: Getty Images / Per-Anders Pettersson

A scarcity of local football shirts might seem like a strange topic for someone who hadn’t followed the local game for more than a decade. I’ve been so far removed I’ve gotten used to using the British “football” while South Africans, of course, largely refer to it as soccer. This was purely a product of my being out of the country and losing access.

It was a source of frustration when I first arrived in the UK that, with a Sky TV subscription, I could watch any random South African rugby game, but absolutely zero soccer. If you were inclined to spend your Friday night at home watching the mighty Griquas take on the Leopards, no problem. But if you wanted to have friends over on a Saturday afternoon to watch the Soweto Derby — one of the biggest events of any sport in the country — not a chance. That was before streaming matches on dodgy sites located somewhere in the old Soviet Union became a thing.

There’s no need for me here to dwell on the reasons for this discrepancy, which says more about broadcasters’ ideas about which type of South African goes to London, and what type of sport they’d be interested in.

I had to turn to the old enemy for a proudly South African Bafana Bafana jersey. Imagine my surprise when it arrived, couriered all the way from the Netherlands — proudly made by workers in Indonesia

So over time, my emotional connections with Orlando Pirates loosened and by the time I came back to SA and watched my first game, I couldn’t recognise a single name on the team sheet. I’ve been slowly getting back into it, even managing to watch a couple of live PSL games. I’m not sure which I enjoyed more: the game against Wits at their rather intimate stadium in Milpark or the big derby against Kaizer Chiefs at Soccer City. One of the downsides of being away in that period is that I missed the 2010 World Cup, so this was my debut at this impressive venue, so to speak.

Now I’m fully immersed into Pirates again, and one of the first items on my Christmas shopping list was a replica jersey or two for relatives. Which is a nightmare if the relative you are looking to buy for is of the younger generation. I remember a time when “proudly South African” was the buzzword, so it was a little more than dismaying to discover that this didn’t apply to young soccer fans. Walk into any sports shop in Sandton or Rosebank and you’ll have no problem finding your child an Arsenal, Manchester United, or even Tottenham Hotspur shirt.

After many hours spent in the great malls of Johannesburg, I left empty-handed, even after, in desperation, enquiring about getting a Kaizer Chiefs one. There was nothing in the Pirates online store either for little fans. On the plus side, a club spokesperson did assure me they were working with shirt provider Adidas to rectify the situation.

In the meantime, I had to turn to the old enemy for a proudly South African Bafana Bafana jersey. Imagine my surprise when it arrived, couriered all the way from the Netherlands — proudly made by workers in Indonesia.

Lukanyo Mnyanda on airline mix-up's, all the while trying to make it back to Johannesburg in time for a concert
Voices
1 year ago

When it comes to supporting your favourite football team or visiting Home Affairs, it's best to have low expectations, explains Lukanyo Mnyanda
Voices
1 year ago