It’s what you’ve been promising yourself all year: time to read widely and deeply with your phone off. Read this bumper booklist and pick the ones to take along to your hammock 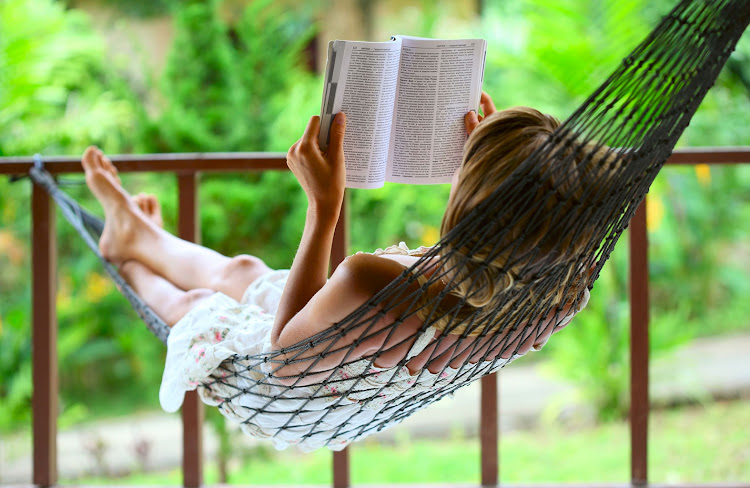 1. YEAR OF THE MONKEY by Patti Smith

Best known as the Godmother of Punk, the rocker queen and prolific writer looks around her with inimitable wisdom. A clarion call to every singular, searching woman. (Bloomsbury)

2. OF HOMININS, HUNTER-GATHERERS AND HEROES — SEARCHING FOR 20 AMAZING PLACES IN SOUTH AFRICA by David Bristow

You can do it, yes you can. Vegan Swedish “meatballs”, spiced cabbage pudding, pulled “pork” with jackfruit, pickled courgette, sticky buffalo cauliflower, and drinks. You might need them. (Pavilion Books)

A warm, irrepressible, making-of-the-man story about the Yeoville boytjie who became a Bolshevik. (Jacana)

In the vein of Educated and Hillbilly Elegy. From being the face of hatred in the abhorrent Westboro Baptist Church to her slowly earned redemption, a powerful study of zealotry and fundamentalism. (Quercus)

An idling trip down the coast from Yzerfontein to Doringbaai, finding and tasting local dishes like heerboontjies and harders, and meeting the local folk along the way. (Penguin Random House)

7. THE CHILDREN’S BLOCK by Otto B Kraus

Adding to the weighty library of Auschwitz literature, the exceptional story of a poet and teacher keeping his young charges’ hope alight. (Penguin Random House)

8. OVER THE TOP: MY STORY by Jonathan van Ness

The Queer Eye darling grew up lonely and ridiculed in the Midwest. When you’re feeling lost, he says, “Remember you’re a Kelly Clarkson song, you’re strong, and you’ve got this.” (Simon & Schuster)

9.THE FATE OF FAUSTO: A PAINTED FABLE by Oliver Jeffers

An exquisitely illustrated cautionary tale for our greedy and narcissistic times. For adults and children alike. (Harper Collins)

10. PHILOSOPHERS: THEIR LIVES AND WORKS foreword by Simon Blackburn

Leave this one lying around the holiday house to up the tone of things. Eighty nuggets of classic but accessible wisdom. (DK Books)

Step into the wildlife war zone with eminent conservationist Grant Fowlds as he fights a ceaseless battle against poachers. ( Jonathan Ball Publishers)

When Ben Rothery was growing up he wanted to be a shark. Now he is content with drawing intricately detailed pictures of wildlife. For animal lovers of every age. (Penguin Random House)

13. INSIDE OUT by Demi Moore

A little honesty goes a long way in celebrity memoirs and Demi Moore delivers it in screeds. There’s the usual marching powder and eating disorders, but she opens up too about a dreadful miscarriage, being cut off by her daughters, and husband Ashton’s cheating. (Harper Collins)

14. THE LIVES OF LUCIAN FREUD by William Feaver

He was said to be monstrously selfish, secretive, and deeply cruel. He was also one of the century’s greatest portraitists. Part One of the first exhaustive biography. (Bloomsbury)

15. THE DUTCH HOUSE  by Ann Patchett

Two siblings, a forbidding mansion, and the shattering past that will not release them. (Bloomsbury)

The cult memoir du jour. How a young Canadian actress got caught up in NXIVM, a repulsive sect masquerading as a self-help organisation. (Chronicle)

18. HEIDA: A SHEPHERD AT THE EDGE OF THE WORLD by Heida Ásgeirsdottír & Steinunn Sigurðardóttir

One of those quirky, word-of-mouth sleepers, by an Icelandic model who has become a shepherd and green activist. (Hodder & Stoughton)

19. ONLY IN TOKYO by Michael Ryan and Luke Burgess

The stadiums might be dark but our appetite for all things Japanese is undimmed. Two Aussie chefs trawl the teeming city from daybreak to midnight sampling myriad foods and finding the people who create them. (Hardie Grant Books)

20. THE STARLESS SEA by Erin Morgenstern

With pirates and ancient libraries, glittering ballrooms, and secret passageways, a wondrous, magical flight of imagination from the author of The Night Circus. (Penguin Random House)

21. UNICORN: THE MEMOIR OF A MUSLIM DRAG QUEEN by Amrou Al-Kadhi

“My name is Amrou Al-Kadhi — by day. By night, I am Glamrou, a fearless and acerbic drag queen who wears seven-inch heels and says the things that nobody else dares to.” (Harper Collins)

One of the best-loved comedians in the world has turned in his badge after 50 years on stage. Gathered here are some of his mad, meandering, effing outrageous stories. (Hodder & Stoughton)

23. THE EDUCATION OF AN IDEALIST by Samantha Power

Life stories don’t get more inspiring than this: the Irish immigrant who advised Obama on human rights and became the youngest ever US ambassador to the United Nations. (William Collins)

24. AGENT RUNNING IN THE FIELD by John le Carré

Impeccable as ever, a chilling portrait of our time ignited by Le Carré’s fury about Brexit. (Penguin Random House)

Put the word out ... the Queer Eye team have brought out their own books
Voices
1 year ago

'Untitled: The Real Wallis Simpson, Duchess of Windsor' throws some unusually warm light on the woman everyone loved to hate
Voices
1 year ago