Picture perfect: Graphic novels, the genre that the in-crowd are reading 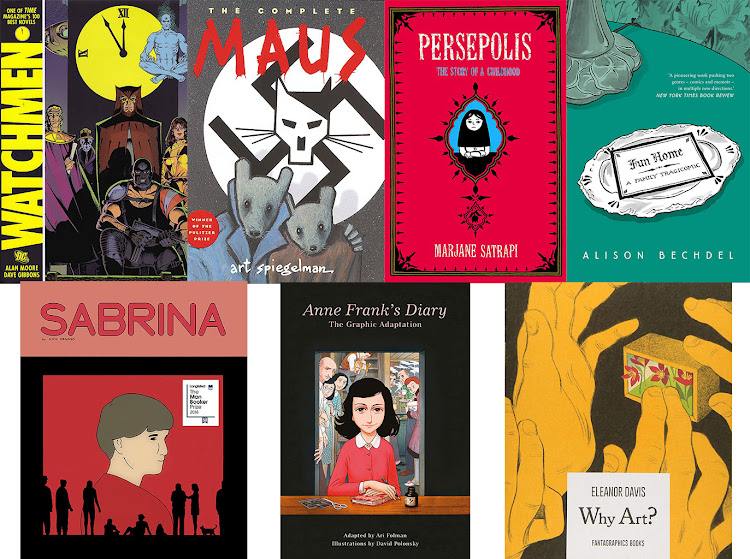 Graphic novels match the pace and the prisms of our digital world. On the surface, they may be easier to read, which probably explains their popularity with younger readers. But the format is increasingly appealing to time-starved culture-vultures of any age, satisfying passions for art and literature in one symbiotic piece of picture-poetry. Serious readers grasp that there is complexity, character, and depth in good graphic novels.

In North America alone, sales through comic-bookshops for the combined category of comics, graphic novels, and manga topped $1-billion in 2018, up from $870-million five years ago. Worldwide, a truer gauge of the trend is that graphic novels in many genres are now distributed well beyond speciality comic stores.

Jessica Smith, manager and graphic-novel buyer for The Book Lounge in Cape Town, says that its graphic-novel section has expanded consistently over the past few years. “Currently we have 120 items in the section — a mix of comics, graphic novels, and zines — compared to 950 books in our largest section, fiction,” she says. “We now carry more graphic-novel titles than at any point since the store opened 11 years ago.”

Out with the heavyweights and in with the new, including a graphic novel, as the longlist is announced
Voices
3 years ago

Graphic novels are finally, without qualifications or qualms, being recognised as having literary merit. Sabrina, by Nick Drnaso, was longlisted for last year’s Man Booker prize, a first for a graphic novel. “The reading public who may have been dismissive of comics or graphic novels are now engaging with them in new ways,” Smith says. “The nomination left the publishers struggling to meet demand.”

The medium is also finding its way into highbrow environments. The New York Public Library has a weekly graphic-novel-club meeting, as well as a monthly graphic-novel discussion forum. And Cambridge University Press — dedicated to publishing high-quality academic content, such as research journals, reference works, and textbooks — has compiled its Cambridge Companion to the Graphic Novel.

Gravitas aside, we probably all (even secretly) love comic books — and the simplest definition of a graphic novel is a long comic. Marketing hyperbole for comics goes back to the 1940s, when DC Comics’ All-Flash Quarterly claimed to include “novel-length stories”. Comic-book historian Richard Kyle first used the description “graphic novel” in 1964, and the term gained acceptance with the publication of articulate, meaningful stories such as Will Eisner’s A Contract With God in 1978, Alan Moore and Dave Gibbons’ Watchmen (1987), and Maus by Art Spiegelman, which he serialised from 1986, but which achieved commercial success after later publication in book form.

In Japan, manga — as a formalised comic magazine — has existed for at least a century. Globalisation and the internet, in raising awareness of and interest in Japanese culture, may have something to do with the strong foundations of graphic novels today. Manga accounts for nearly 40% of comic-book sales in France, for example.

Brian Garman, senior lecturer in media studies at Rhodes University, agrees these trends are coalescing to push the popularity of graphic novels. “I do think there’s a resurgence. It’s been driven for a while by the growing global popularity of manga — and, of course, the movies.”

Films have undoubtedly played a huge role in mainstreaming comics. Superhero fantasy has served as a cultural and financial testing ground. It’s worked, brilliantly: half of 2018’s top-10 box-office drawcards were based on Marvel comics. Movie success regenerates interest in the source-comic medium and in the more cerebral graphic-novel territory too.

WANTED’S 7 PICKS TO EXPERIENCE THE BEST IN ILLUSTRATED STORYTELLING

1. Watchmen by Alan Moore and Dave Gibbons (1987). A seminal work, solidifying the evolution of comics through to graphic novels and the genesis of blockbuster movies. It’s the only graphic novel to appear on Time’s 2005 list of the Best 100 Novels.

2. Maus by Art Spiegelman (1991). Pulitzer Prize-winning tale of Holocaust horror told from the perspective of the subsequent generation.

3. Persepolis by Marjane Satrapi (2000). An award-winning autobiographical account of adolescence in the Iranian Revolution. Satrapi also transformed her book into a commercially successful and critically acclaimed movie.

4. Fun Home by Alison Bechdel. Recognised as one of the best books of 2006 by The New York Times, Bechdel’s autobiographical tragicomedy captures the struggles of adolescent sexual identity and the oddities of growing up with a gay father.

6. Sabrina by Nick Drnaso (2018). The first graphic novel to be nominated for the Man Booker prize.

7. Why Art? by Eleanor Davis
(2018).Captivating, wide-ranging critique and commen-tary on art, fashion, and style.

Of course, when there’s money to be made, the marketers move in. MacMillan’s graphic-novel imprint is First Second Books, with an enormous range across all age categories. The division’s creative director, Mark Siegel, sees money as the root of the format’s rising popularity. “A decade ago, Hollywood began basing movies on graphic novels. Suddenly, there were millions of dollars changing hands and huge sections of graphic novels appearing at bookstores. [Traditional] publishers began asking, ‘What is this? And why are we missing out on these millions?’” Now, he confirms, “It’s the fastest-growing category in publishing.”

The power of a graphic novel resides in its form — but it springs to life in the zeitgeist of the times. Nerds are now normal. And young people today are comfortable around the periphery: subcultures involving body-piercing, tattooing, anime, and cosplay are manifestations of openness — an acceptance that different is good, and fantasy even better.

This sociocultural shift has prised openings for publishers to explore new market segments, and graphic novels slot seamlessly into the gaps. An underlying trend is for graphic novels to address themes relevant to niche-within-niche communities of available readers. Today, more than ever, there’s a vessel for new voices, and a receptivity for them to be heard. “There’s a strong push-back against the typical superhero storyline and more focus on representation and self-awareness,” Smith says.

Well-established indie publishers such as Fantagraphics, Image, and MonkeyBrain have been toeing this water for a decade or two. But as the publishing sector splinters further, the degree of uniqueness and diversity is expanding. There’s even a new wave of experimental books that cut across formats in a mishmash appeal — a niche that is growing, eroding the established, and making anyone who appreciates literature or art sit up and take note.

Online channels, too, are a boon for graphic novel artists and writers. Social media, especially Instagram, acts as a platform for a portfolio. This means more diversity, both in content and authorship. Search Art Station, a digital forum for artists and designers, and more than 3,000 graphic-novel artists and novel snippets appear.

Indeed, the publishing industry itself is being redefined. Self-publishing is more viable through crowdfunding programmes such as Kickstarter — successfully used, for example, by South African creators Daniel and James Clarke, whose 2018 work Kariba: The Graphic Novel is a gorgeous blend of spectacular art and African-themed, Disneyesque legend.

“It’s an exciting time for the medium,” summarises Smith. This is demonstrably appreciated by devotees such as Dominique Benton, an illustrator and art teacher based in China. Back in South Africa on holiday, she recently bought Maus, and I meet her picking three more graphic novels off the shelves at Exclusive Books.

“I like the multiple stimuli. The narrative complexity lies in the visuals,” Benton says. “That’s where the novel’s character comes from, conveying the story in what isn’t said. You have to read between the lines.” Animation student Kyle Ryan, 21, agrees. He’s been reading comics and graphic novels since he was 12, graduating from Spider-Man, Batman and Star Wars to more literary works. His current favourite is Saga, by Fiona Staples and Brian K Vaughan. Ryan loves the work because, “as a visual thinker and artist, [Staples’] use of simplistic, rough shading and lines have an alluring realism”.

The appeal of graphic novels may lie within us. Brain scientists confirm that the speech-balloon devices in graphic art mimic the mental juggling of ideas and constructs that preface verbal communication. Our minds work in small images, neurotransmitters trading in emoticons. Or, as Spiegelman put it, “We think in little bursts of language — puffs of thought — not in long-winded paragraphs.”

Which amuses — but doesn’t surprise — legendary South African cartoonist and satirist Jonathan Shapiro, better known as Zapiro. He studied under Spiegelman. “He’s the progenitor [of the graphic novel] and still the best I know,” he says.

Zapiro himself is a world leader in a different genre of graphic novels: non-fiction cartoon journalism. Pictures tell a thousand words, and the power of brushstrokes brings current affairs to light and life. Joe Sacco, for instance, pioneered graphic war-reportage comics. His work has run in Time and The New York Times. It’s also been published in graphic novels, such as those about the Bosnian War: Safe Area Goražde and The Fixer. More recently, long-form comic journalism has found expression in bio- or autobiographical graphic novels including The Unwanted by Don Brown, and Kate Evans’ Threads, both of which spotlight the refugee crisis.

Picture book made by rapper and programmer, Raj Haldar, takes a humorous look at the quirks of English
Voices
3 years ago

The grimmer aspects of the world resonate with gritty, under-construction Claremont, the location of Readers’ Den in Cape Town. Owner Nizar Abrahamse muses that his business “doesn’t get the funny looks of, say, 10 years ago. There’s a renewed respect for the medium of comics and graphic novels — they’re part of the mainstream.”

Readers’ Den sales assistant Robyn Wilkin always has five or six graphic novels or comics on her bedside table. It’s common for fans to regularly re-read their books, in the same way movie buffs rewatch their favourites. “Every time you see something else, there’s always a new discovery,” Wilkin says. I sense she could chat to me for hours about the latest shipment into the store, which includes a fresh adaptation of Shazam (timed to coincide with the new movie), a beautiful, tome-like reissued compilation of Tank Girl, and an omnibus format of Warren Ellis’ cult series Transmetropolitan.

I’m blown away by some of the prices, which exceed those of most conventional books. “It’s the art,” says Wilkin. The rand’s weakness is also undoubtedly a factor and must be a frustration for aficionados. But the medium comes at a cost even in the US, where seven of the top-10 graphic novels by sales value in 2018 were priced at $75 or more.

Renewed interest in graphic novels may be a tale of two generations. Generation Xers such as Garman were there at the start of the comic-book explosion — and they now have the money, and the time, to rekindle an old flame. Millennials such as Benton and Ryan have grown up bombarded by visceral imagery — inescapable, and more of it: in media, in advertising, in public spaces, on our computers, mobile phones, and tattooed on our bodies. Billboards, memes, emoticons, gifs — it’s natural for them to embrace graphic novels.

Popular culture morphs into various forms, then often loops back, in fuller circles. Visual storytelling has captivated humans for aeons: 40,000 years ago, caveman storytelling was entirely visual. Now there is so much more to tell, and graphic novels epitomise the changing shape of literature to bring these stories to life.

Murder, bush lore, robots, and redemption. Get out of the chill and under the covers with these enthralling new books
Voices
3 years ago

Grab a cuppa, kick off your shoes and fall into an armchair with these great reads
Voices
3 years ago

It’s not often that books make the transition successfully, but these ones look promising
Voices
3 years ago