Take a cool dip into the mind of Michael Farquhar, CEO of the Two Oceans Aquarium

The learned marine biologist on plastic pollution, conservation and investing in education 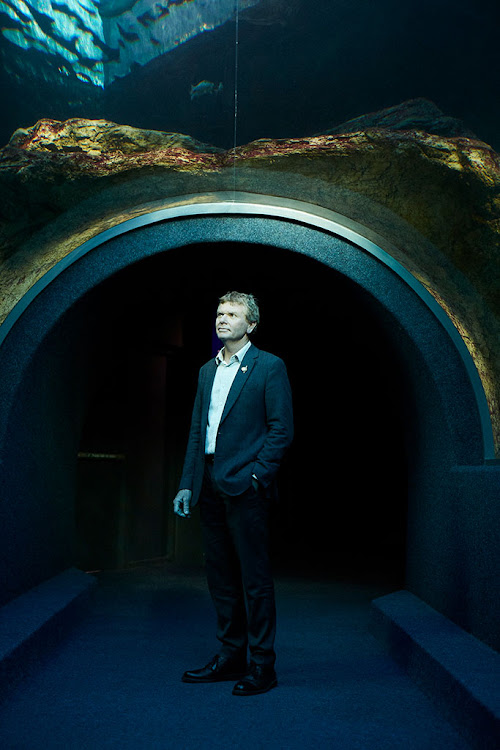 If you want to rile Michael Farquhar, ask him about helium balloons. “Really, in this day and age, in Cape Town, you’re going to give out helium balloons? A balloon on a silly little plastic stick? You really need that? Where do you think they’re going to end up?” Talking about the novelty balloons popular in some family restaurants is the only time the affable chief executive of Cape Town’s Two Oceans Aquarium comes close to losing his cool. Understandably so: as a marine biologist with 20 years’ experience in ocean conservation and research, he has some skin in the game.

Farquhar was born in Wales and raised in Belgium, but he credits the rocky shores of the Eastern Cape with cementing his love of the ocean.

“It was there that I just fell in love with the South African coast,” says Farquhar, who left Rhodes University with a Master’s degree in inter-tidal ecology. “People simply don’t appreciate the diversity of the South African coast. It’s as rich as the fynbos on land. There are big aquariums around the world that have exhibits of our southern coast, because there are so many endemic fish species here.”

Farquhar joined the Two Oceans Aquarium in 1997, as an aquarist looking after the kelp-forest exhibition. He became CEO in 2016, and inhabits a corner office with an enviable view of the V&A Waterfront and the city. The Two Oceans Aquarium — run as a for-profit business, owned 70/30 by the V&A Waterfront and Investec — is an anomaly among global aquariums. It receives no government funding, and 70% of its revenue comes from paying visitors.

Into the blue with marine biologist & Rolex ambassador Sylvia Earle

Sylvia Earle is a committed ocean activist at the age of 82. Wanted asked this extraordinary woman about her journey thus far
Voices
4 years ago

And there’s been no shortage of feet through the door. In the last five years visitor numbers have jumped 25%, growing to 500 000 a year. To improve the offering, the Aquarium has spent north of R70-million in the past four years, building a new 1.6-million litre tank — the I&J Oceans Exhibit — as well as refurbishing existing exhibits.

But for Farquhar it’s all a means to an end: the aquarium’s profitability enables investment in education, conservation, and research. That investment runs to about R5-million a year, funding full-time teachers, on-site classrooms, and specially modified outreach vehicles.

“It’s a big operation: we reach 80 000 school kids a year,” Farquhar says. “And it’s all funded through ticket sales.” But he wants to do more. In 2018 the Two Oceans Aquarium Education Foundation was established as a registered non-profit and public-benefit organisation.

“Because the Foundation is non-profit, we can tap into corporate social investment money, which will allow us to do more education work,” he says. It will also, Farquhar hopes, free up funds for enhancing the aquarium’s conservation and research efforts.

Despite those admirable goals, aquariums are not immune to the global discussion around the ethics of keeping animals in captivity. These are murky waters. Are sharks acceptable in captivity, but dolphins not? What about orcas? Fish are fine, but mammals not? Where is the ethical line drawn in this sand?

“It’s about education and conservation,” Farquhar insists. “If any of the animals are not serving the purpose of the aquarium, we have to ask why we’re keeping them. Our driving goal is to change people’s behaviour and to inspire them into action for the future wellbeing of the oceans. But to do that you need to attract people. You need to put on a good show. It’s an interesting balance.”

When it comes to using the “show” to influence public behaviour, the aquarium’s focus is on two main issues: plastics pollution and overfishing.

The aquarium was a founding partner of the South African Sustainable Seafood Initiative (Sassi), and uses aquarium visits to remind people that not all fish come from sustainable sources. “Find out what you are eating,” he urges. “There’s no point in preaching bad news if you can’t give people simple solutions to do something about it.”

Solving the problem of plastic polluting the oceans isn’t as simple. While it’s easy to get angry about plastic on the beach, it’s the plastics you can’t see that are the real problem. Micro-plastics — particles smaller than 5mm — are the silent scourge of the world’s oceans.

“There is not a corner of the ocean that doesn’t have micro-plastics in it,” Farquhar says. “It’s getting into the food chain from the bottom up.”

While there’s little to be done about the micro-plastics already in the oceans, the aquarium’s focus is to cut the waste entering the oceans today. Those efforts run from beach clean-ups and educating learners about plastic and litter to working with retailers and restaurant chains to reduce their reliance on single-use plastics.

“The screws are being turned by public opinion,” Farquhar says. “We’re just trying to help reduce the load that’s coming down the line. Let’s start putting a lid on it now, instead of just carrying on the way we are.”

Step one? Lose the helium balloons.

Breguet embarks on a crucial mission for the oceans

A wave of change: Opt for alternative seafood this new year

Andrea Burgener urges you to consider swapping out salmon and prawns for the greener, and equally delicious, trout and mussels
Food & Drink
3 years ago