Should one hedge Baby City spending with purchases in the stock market?

New mom Giulietta Talevi investigates, armed with data and a smorgasbord of online retail options at 3AM 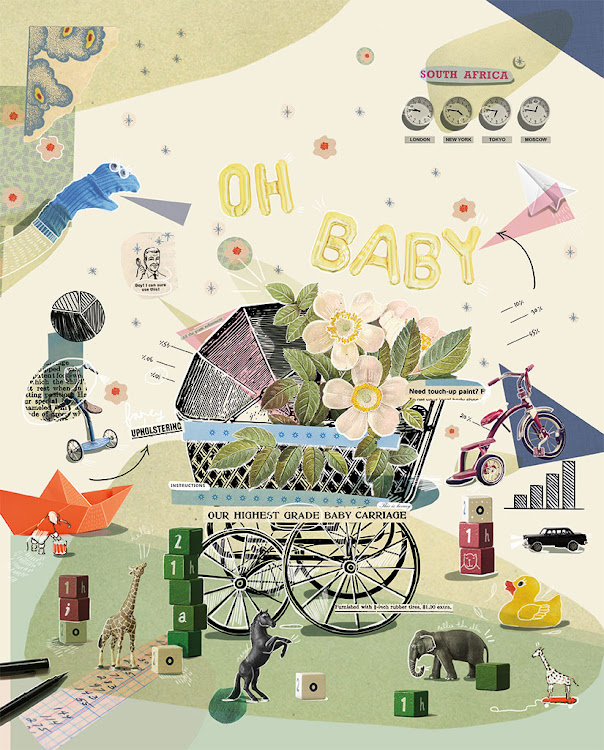 I am tempted. The silver cross surf Aston Martin pram is a head-turner, but at R59,999 it’ll buy my old Peugeot twice over. Still, it sells, though Fairoze Moolla, who mans family-run online retailer A-Zee Baby, is cagey on how many a month. A-Zee Baby has exclusive rights to the stroller, which Britain’s Aston Martin and Silver Cross describe as an “exceptional pram system”. It is gorgeous: a hand-stitched leather handle, a “pearlescent white” chassis, a sheepskin liner, and a light-as-air cashmere blankie for those chilly days … If only they had an adult version.

A-Zee, like its peers Baby City and Kids Emporium, also sells the gamut of stuff you never knew you needed. When I ask Moolla what’s the most anyone’s ever splashed out in one go, I’m impressed: R150,000. Average spend, he says, is more like R10,000 to R15,000, although on the subject of strollers, Norwegian line Stokke only starts at R10,999 and climbs to more than R20,000 — and they remain potent sellers.

While these are all engineering marvels, they’re still just prams. They’ll get sicked on and pooed in, and if you really want to give your whippersnapper a chance in life then besting the other mums with your Bugaboo bling (R26,799 for the Cameleon3 by Diesel, Military version — yes, really) is not the way to do it.

Say you put that R59,999 into the stock market for 18 years. Working on a rate of return of a conservative 9% — a real gain of 3% minus inflation of say, 6% — that will grow to a fairly meaningful R283,000. Of course, if South Africa gets a dose of Venezuelan voodoo economics, it might be just enough to snaffle you a toilet roll. But, in general: some delayed gratification now, far less kicking and screaming later. Not for nothing is compound interest known as the eighth wonder of the world.

So powerful is the combination of delayed pleasure and compound returns that Investec Asset Management has built an entire advertising campaign around it. Called ThankMeLater, it started out as a push to promote tax-free savings, but, says Investec Asset Management marketing manager Kotie Basson, “We thought, hang on, this shouldn’t just be about tax-free savings, this should be something every parent should be thinking about: stop spoiling your kids now and rather use that money for something meaningful.”

Easy Equities, whose mission it is to simplify and democratise investing and share trading, now offers would-be investors vouchers to give to their children. Twenty-first birthday? How about a R2,100 gift to start your share portfolio? The outfit has shaken up South Africa’s trading world and the results are fascinating: its fastest-growing user base is tech-savvy millennials and, increasingly, kids as young as 10.

Easy Equities’ Carly Barnes says she’s seeing users buy share vouchers for baby showers. “It’s something different to give. It’s an opportunity to share and learn together. It’s an experience as well as a gift,” she notes.

The other option is to hedge your Baby City purchases by investing in the companies that make them. Babies are big business — especially for first-time parents or, as I like to think of us, suckers. Jean Pierre Verster, a hedge-fund manager with Fairtree Capital says new parents’ desire to buy the best for their first child is a huge drawcard for companies involved in making high-margin baby gear, particularly as people in developed markets are generally having fewer kids, and spending more per child as a result.

In China, chances are that children are only children of only children — and with no other siblings for grandparents to dandle on their knee, “That means there’s always an investment opportunity when people are spending more money on a particular need, especially when there’s an emotional connection,” he says.

Sadly, companies have cottoned on to this dynamic. A lot of the brands that have become household names are bought out by bigger firms. Stokke, whose Tripp Trapp adjustable high chair is the best-selling furniture item in Norway, according to Wikipedia, was snapped up by NXMH, the investment arm of South Korean gaming company Nexon in 2013. Still, you could buy shares in Dorel Industries, the Canadian owner of the Maxi Cosi and Quinny juvenile-products brands, or you could go large in the toy department with listed companies Hasbro (the world’s largest toy company) and Barbie-owner Mattel.

Or, as you remove yet another nappy, buy the companies involved in baby staples — Kimberly Clark (Huggies), Johnson & Johnson (toiletries), or Procter & Gamble (Pampers). That’s a dynamic that applies to almost all investments. When you buy shares with the aim of keeping them for a while, look at two types of company: the lowest-cost producer, or the firm with the strongest pricing power. The one is all about volume — billions of nappies a year, say. The other is where you push the price as high as possible because you can. Think Ferrari, Louis Vuitton owner LVMH, Gucci parent Kering or Johann Rupert’s Richemont. High-end baby gear falls squarely into this category.

And if you’re now starting to have some fun in the equities shopping aisle, does it make sense to try to find companies you think will be big by the time your baby is? Some say it’s a mug’s game. In the early days of the internet, Yahoo was the popular stock pick. Now we know the right call would have been Amazon.

Verster has another way of looking at it. “I try to think: how will the industry and this company look 10 years from now?” he says. “But what I’m looking for is actually not change: it’s lack of change. I’m looking for industries where I think the company will be in a similar state, if not in a stronger position than it is today, and that the industry will not be disrupted.” For instance — the toy market. “I don’t think that kids will do everything on a screen because motor development is very important and you need to use your hands. So toys are not going to disappear,” Verster says.

Where it gets tricky is picking the right company in the right industry. “An industry might grow, but it might also attract a lot of capital and a lot of companies, which means the returns in that industry (won’t be) very high,” Verster says. The classic example is Tesla. Electric vehicles are the future but “does that mean Tesla should be worth more than Ford and General Motors? Will it dominate the electric-car industry and earn above-average margins? On that question I’m less certain,” he says.

Grandfather of six and stock-market survivor David Shapiro, from Sasfin Securities, is a little more gung-ho. He is a big believer in picking industries of the future, citing the staggering ascendancy of companies such as Amazon, Facebook, and Google. Since 9 March 2009 — officially the bottom of the market after the credit-crunch crash — the US S&P 500 index has rallied almost 300%, even after October and November’s meltdown.

Almost all of that is thanks to tech firms. Put another way, $100 invested in Amazon on that date would today be worth $3,318 — a 3,218% gain. Google, meanwhile, would have given you a 617% return. “Ten years ago, these companies were insignificant,” Shapiro says, “and none of the growth that we’re seeing was predicted or even imagined. But if you’d bought old faithful General Electric, it’s at the same level today as it was then. So you’ve got to try to work out the industries of the future.”

The other factor to remember is that as companies become increasingly valuable — Apple now has a market capitalisation of about $850-billion — and increasingly cash flush, they’re able to invest stunning amounts of money in both skill, and other companies. “If you’re a genius engineer and some startup comes to you or Apple comes to you, you know where you’re going to go,” Shapiro says.

“You’ll make mistakes, but don’t be scared to recognise your mistakes,” he says. Shapiro is the son of a stockbroker himself, and wishes his dad had just retained a portfolio of quality shares, occasionally shedding the old for the new and upcoming. “I would have been in the multi-rich class,” he laughs. “The vast fortunes that have been made in equity markets far outreach any other asset class. Stay the course and just be patient.”

South Africans looking for an offshore hedge flock to Mauritius

It offers virtually no crime, a growing economy, a low tax rate, and zero forex controls. And, well, it’s a tropical paradise…
Travel
2 years ago