Gaggan Anand, an Indian chef in Bangkok, has placed the city on the fine dining map over the last seven years. Wanted caught up with him in the Thai capital to find out what’s next on the menu 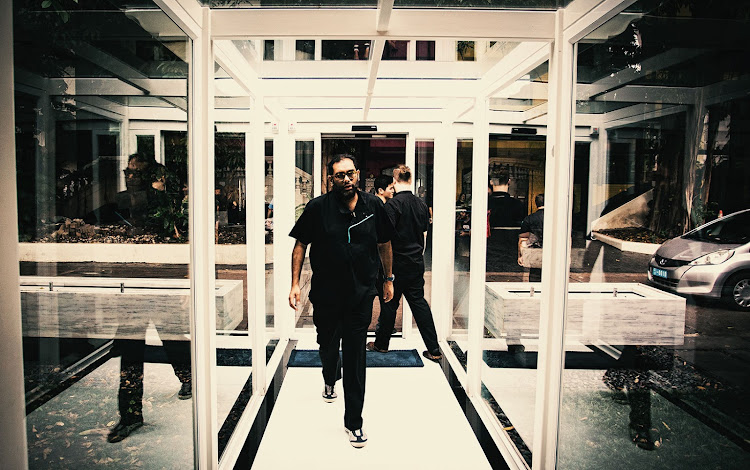 By 2020 a restaurant called Gaggan, currently number one on Asia’s 50 Best Restaurants list, and number seven on the World’s 50 Best Restaurants list, will be no more. Chef Gaggan Anand, towering at over 1.9 metres, his ponytail wound in a man-bun, is a Punjabi from Kolkata and a former drummer in a rock band. Now, the celebrated chef is preparing to shut his restaurant down. For good. “We chefs, we are now at the mercy of our own fame. We want fame and then we become victims of fame,” Anand says.

We’re in his red BMW 3-Series, and he speeds like a demon on a mission to the At Tor Kor market in the northern fringes of Bangkok. There are echoes of the tattooed Brazilian chef Alex Atala from his past; but whereas Atala can be withdrawn, Anand booms, the life of the party, the last one to go home. “I know I’m good for TV. But, then who will cook?” he asks, explaining why he’s avoided the celebrity TV route, and chuckling at his cleverness. Brash, generous, manic, genius.

He’s been called many things. None of which provide a satisfactory answer as to why Anand would decamp a mere 10 years after the restaurant’s opening; particularly because his struggle to get to this point — as documented in his moving Chef’s Table episode — is well known.

If you search through the archives, Gaggan, as he’s called by those in his close circle, has been dropping hints about his restaurant’s closure since 2015, when it first reached number one on Asia’s 50 Best list, a title it’s retained since. The menu features what he calls “progressive Indian”, a name inspired by his love of progressive rock music. The dishes come from the vast subcontinent, and are made using Japanese techniques and ingredients.

Anand has been taking painstaking notes from the best in the field, including the godfather of molecular gastronomy — Ferran Adrià. To this day, Anand’s fresh yoghurt explosion — ovals of salty yoghurt that burst in the mouth, based on El Bulli’s inimitable liquid olive spherification — is a mainstay on the menu. The menu in question is a 25-course extravaganza of bites, represented in emoji format. Anand’s first experience of El Bulli, brainchild of Adrià, his mentor, was to work in the lab just as it was closing, when it was at its peak.

Make no mistake, Anand isn’t the sort of millennial chef we’ve come to associate with the Nouveau movements — New Nordic, New American, Modern British, or even New Portuguese gastronomy. He has a hint of a beard, but no demonstrable tattoos; his music of choice is the rock hits of the ’80s, which, if you’re lucky to attend one of the Gaggan after-parties hosted when he’s in town, you’ll hear playing from his cellphone.

His protégés and staff members, on the other hand, are millennials. At the age of 38, Anand has invested hard cash, and deployed his vast network of contacts, to make many of their dreams a reality. Take the German twins, Mathias and Thomas Sühring, who run an exquisite German fine-dining restaurant, Sühring, in a refurbished mansion in the suburbs; Garima Arora, formerly of Noma, who heads Gaa across the road from Gaggan; and Meatlicious, which is what Anand calls an investment for his wife, Pui, and her friends. He devised the latter’s menu of comfort food, and they run it. On the cards is Wet, a wine and fried-chicken bar, with his straight-talking head sommelier Vladimir Kojic. Anand considers the investments key to freeing him up so that he can “work on my art”. There are few chefs who can diversify this much and travel as extensively as Anand does, while maintaining the standard expected by his clients. José Avillez, with two-star Michelin Belcanto and a string of establishments in Lisbon; Dominique Crenn, who runs Petite Crenn and two-star Michelin Atelier Crenn in San Francisco; and the Adrià brothers are a few rare exceptions.

Pulling up to the At Tor Kor market, where Anand visits his favourite fresh spice seller (“You must buy the curry pastes from here,” he instructs), he ruminates on the future. Around us vendors whisk oysters into fluffy omelettes, stir-fry pad Thai studded with plump prawns over hot woks, and ladle curried noodle soups into cheap bowls. It’s well known that Anand’s next project will be a small restaurant (GohGan) in Fukuoka, Japan, with friend and collaborator Takeshi Fukuyama of La Maison de La Nature Goh. Anand’s love affair with Japan will mean that he spends a significant slice of time away from Pui and their toddler, Tara, whom he lovingly calls #Thaibaby on Instagram. “I am already famous. But I’m in a comfort zone,” he says over coffee at the Royal Thai Project’s coffee shop. It’s adjacent to the market, where pristine sustainable produce, grown on reclaimed opium lands, is sold. “You can’t go from the top of one mountain to the next one. You’ve got to start from scratch. I have to quit everything, sacrifice everything that I have, and get out of this comfort zone,” he says.

Questions about his mortality circulate — perhaps Anand has had a premonition about his life span (his brother’s untimely passing is well documented); perhaps it’s the publicity stunt of a talented chef with a newly inflated bank balance. At various moments — during service, or on the nights we all go bar-hopping — the staff tell stories of how Anand has gone to great lengths to provide them with skills in a kitchen that does not follow the rules, nor the customary hierarchy: there are no head or sous chefs, technically. It’s led to what Gaggan’s operations manager, former lawyer Meenakshi Kumar, calls a “family dynamic” — co-workers who genuinely care for each other. “But he’s always checking in on the WhatsApp group. And they get a grilling,” she laughs. Anand’s chefs tells me that he is an avid socialmedia user, and if any dish posted by a customer on Instagram doesn’t meet his standards while he is away from the kitchen on his travels, they receive a tonguelashing, sharp and furious. “He’s hard on you, but he’s fair,” Kumar says.

We chat to the chef of this trendy island eatery about everything except the name of the restaurant. That’s a subject he’d rather keep as a surprise ...
Food & Drink
5 years ago

“I love Thailand — my wife is Thai, my daughter is Thai. But I promised my mother that I would never give up my passport — I will die (an) Indian,” Anand says in a contemplative moment in the car as we exit the market.

He slams the accelerator on the highway. “They want me to represent this country but I can’t do that — that’s for a Thai person,” he adds about the official interest in the glory Gaggan has brought to Bangkok, and its role in reviving its dining scene. Patrons fly in from Japan and nearby Asian countries just to eat at the restaurant.

One can’t help but experience a stab of pathos when hearing Anand speak about India, his home country, and a place where he is yet to make his mark. “You can’t sell Indian food to Indians. It’s a losing game,” he says, dismissive of the science and technique that his brand of gastronomy delivers. When he hands out T-shirts to his staff reading, “Hug Me. I Smell Like Curry”, there’s a tacit understanding that this uncornered market remains the one the closest to his heart.

Anand’s recommendations on the best of Bangkok food and dining

SÜHRING For imaginative German cuisine rooted in childhood memories, the Sühring twins may very well be serving the best version in the world.

MEATLICIOUS Anand hascreated a comfort-food menu, with items like ragu with chilli and Thai-style cevichee. It’s a laid-back but upmarket eatery, run by young chefs.

SMALLS This corner house bar and lounge delivers live music in a charming space by Bangkok nightlife legend David Jacobson. The cocktails and hearty snacks are great too.

NAHM Aussie chef David Thomson’s Nahm is a study in classic and ancient Thai food, and has won the respect of esteemed Thai chefs.

AT TOR KOR MARKET One of the top covered markets in Bangkok, it does get its fair share of tourists, but it’s very comfortable to navigate on your own, and the quality of the produce and street food is top notch. Kamphaengphet Road, opposite the Chatuchak market.

CHATUCHAK WEEKEND MARKET This sprawling weekend market may take you an entire day to explore. Anand says he likes to keep an eye out for emerging artists, and encourage his friends to buy their art too.

GINZA SUSHI–ICHI BANGKOK For sublime, authentic Japanese sushi from a brand with a f lagship sushiya in Tokyo, the omakase (chef’s choice) menu is as good as it gets.

The lion of Franschhoek, Analjit Singh

The chef patron of Jan on settling in Nice and how it feels to have a coveted Michelin Star
Food & Drink
6 years ago
Next Article
© Wanted 2022 - If you would like to reproduce this article please email us.