Foundry’s Louis Olivier has left his prints on Kentridge sculptures 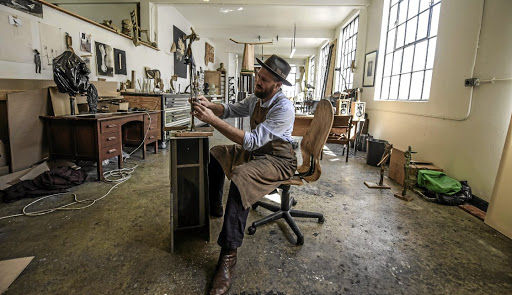 Contemplative: Louis Olivier is striving to discover a language of his own, though he takes inspiration from collaborator William Kentridge and the art of the Dogon
Image: Supplied

Years from now, people will study this sculpture and see this other thumb print on it and find it belongs to Louis Olivier, says the artist holding a small William Kentridge sculpture in his hands. Olivier’s fingerprint might not be traceable on every Kentridge bronze-cast work, but hundreds, if not thousands, of them have passed through his hands since he began producing sculptures for this world-acclaimed artist.

The relationship began in his studio, continued in Kentridge’s and was solidified in more ways than one since establishing the Workhorse Bronze Foundry in Joburg.

Olivier guides me through the basement of this four-storey establishment in a dodgy part of the inner city, where a production line churns out Kentridge sculptures. It is hard to hear his voice above the din on the third floor where a worker, or artist (the lines are blurred) refines the details of a bronze statue of a struggle hero destined for Dali Tambo’s sculpture park. This is an art factory of sorts. Art, especially Kentridge’s, is now big business. Olivier might have a BCom degree, but he is not a simple artisan, businessman or industrialist who founded and heads a successful foundry; he is an artist too.

The next Kentridge? 6 local artists you should invest in now

We chat to three experts working in the art world to find out who they’re putting their money on when it comes to the next generation of South ...
Art & Design
5 years ago

It was while bobbing on a surfboard waiting for the next wave at a Durban beach that Olivier’s life did an about-turn. He was also encouraged by his wife’s observation that, "I came to life when there is a piece of wood in my hand – ‘this is who you are’."

"I remember looking out the window of my office and seeing a man on scaffolding, watching him work hard in the sun. I was fascinated by it. There was something drawing me to that."

This overwhelming drive to craft or forge objects is best expressed through the bronze sculpture The Blacksmith, which showed as part of his recent solo exhibition at Circa Gallery in Cape Town, 100 Generations of Soil. This life-size figure is part human, with a blacksmith’s tool as a head. This could be read as a self-portrait of Olivier, were it not for the fact his drive goes beyond simply producing or reproducing things. The medium of sculpture automatically led him into a dialogue around the body, which he explored in the exhibitions Pale Male, Mannerisms and Fragments, all at the Lizamore & Associates gallery.

Gallery owner Teresa Lizamore played an important role in his transition as an artist. Not only did she commission him for sculptures for RMB and Sasol, but through a mentorship programme she formally linked him to the artist Wilma Cruise.

"I have a strong connection with Wilma. She had to be nagged into mentoring me. Our relationship has been ongoing since them. We are doing something together now and I have been doing some casting for her," he says.

Kentridge would become the catalyst for many things in Olivier’s life and artistic practice. In making objects for a series of works linked to Kentridge’s The Nose production and for the Refusal of Time installation that debuted in 2013, Olivier was, by proxy, dipping his toes in a wider international art world and gaining confidence.

That Kentridge generously views people who play a role in the production of his art as collaborators proved enormously encouraging for Olivier. "He had the confidence in me. He said to me, ‘You know my work, you have the eye.’ He chooses his collaborators quite well. He saw something in me."

Olivier’s collaborative work with Kentridge has been a gift and a burden to his practice, for Kentridge has left his "fingerprint" on Olivier’s art too. The artworks at 100 Generations of Soil reveal traces of his artistic influence. Superficially, the charcoal drawings and collaged ones in which he has repurposed historical documents, pages, bring Kentridge’s aesthetic to mind.

"If something is beautiful, you want to go to your studio and copy it," says Olivier, who is proud of the association.

If something is beautiful, you want to go to your studio and copy it,

Kentridge has probably influenced every artist in Johannesburg or SA, but it was not unexpected this would be so, given Olivier spent his days working on Kentridge’s art, leaving only his nights free to explore his own. Setting up the Workhorse Foundry stole more time from developing it, though Olivier suggests the time limit kept him focused and fuelled his hunger to make art. "I had planned on putting my own work aside for five years and concentrating on the foundry, but there was always a request to do a work for an art fair, a show there and here and it felt like opportunities would slip away if I didn’t carry on," he says.

Olivier says he has struggled to "reclaim charcoal drawing from Kentridge" yet his works in this medium are compelling in their own right. The scale of his drawings and collages are impressive. They are so large (almost a metre in height), they read like monuments and echo the scale of his sculptures, which tower over you in the Circa gallery. In relation to the drawings, this device was designed to make "you the subject" of the artwork, he says.

Initially, the drawings served a practical purpose: to test the scale of the sculptures in a landscape.

"There are so many problems with sculptures; how does it stand without falling over? In the drawings, I try to push that three-dimensional form, sense the depth of the object."

He has solved the quandary, arriving at a series of deceptively simple sculptures, which are inspired by Dogon material culture. "They created vessels for the dead to return," he says. As the title 100 Generations of Soil implies, he is concerned with history and ancestry but more importantly, as an artist, he is trying to understand (or marvel) at the urge to make art, which transcends time and cultural differences.

The result is sculptures that read as objects created at the intersection between art, architecture and perhaps even primitive religious or ritualistic iconography. "I want to imitate but discover something new in the imitation," he says.

He is able to conjure visual drama and evoke atmosphere, though none of this is as calculated as it may sound. He follows Kentridge’s dictum to make work (intuitively), rather than pondering too long about what it is or should be.

Curiously, this has led him to a contemplative space.

An eponymous drawing, which features an empty, dry landscape dominated on the one end by what appears to be the remnants of a structure, leads the mind in all sorts of directions. That is after spending a good 10 minutes simply processing it. It is hard to decide whether you have entered the future or the past. Tying in with his preoccupation with ancient sculptural forms, this plugs into Olivier’s notion that humankind has to remain connected to its roots in order to survive.

"We have to try and remember the past so we can live in the present," he says.

100 Generations of Soil showed at Circa Gallery in Cape Town. It will show at the Dylan Lewis sculpture garden from mid-June through to August.

-Corrigall is an art consultant.