Thebe Ikalafeng, the man of many hats

The founder of Brand Africa is a global African power player, who’s on a mission to serve the continent and shape the African brand

He's a brand and reputation adviser, architect, writer, international speaker, and board director of various organisations — Thebe Ikalafeng is clearly a man of many hats. To fully appreciate the scope of his work, one needs to read his writing, attend his speaking engagements, and note the sweeping, transformative impact he has made while working with brands such as Nike Africa, Unisa, and Transnet.

Ikalafeng believes the digital age has a special importance in the African context. “Technology has been the most significant catalyst for Africa’s transformation, from Cape to Cairo. It has obliterated social and commercialborders, and (has) raised Africa’s voice in the world,” he says. As a man with a keen eye on trends on the continent, he appreciates the need for African brands to adapt to the dynamic world of technology, and build brands thatrespond to African ambitions and conditions. “Digital is no longer a revolution: it is a way of life. Brands now need to build their strategies for a young digital world,” he says.

Ikalafeng has reached the summit of Mount Kilimanjaro “a few times”, and gained a rich perspective that has served him well in his career. This year, he has challenged himself to accomplish something a little closer to the ground.“The next expedition I undertake will begin the challenge (of raising) funds to educate and develop the next generation of African leadership,” he says.

Ikalafeng has worked on successful political campaigns of former Ghanaianpresidents, the late John Atta Mills and John Dramani Mahama, and knows first-hand how leadership can shape the continent. “Instead of bemoaning the state of African leadership, what should inspire us is that in our youthful, creative, and optimistic continent we have the opportunity to set the African agenda and inspire the next generation of the leaders who will build the Africa we want,” he says Ikalafeng, once described by the late Sunday Times social critic Gwen Gill as “terminally stylish”, cuts a fine figure, whether in a formal, bespoke Western suit or traditional African garb.

As a master of his own personal brand, he has a distinguished yet evolving style aesthetic. “My style has evolved, deliberately inspired by my global perspective and passion for Africa,” he says. “Building and supporting ‘Made in Africa’ will transform the continent’s wealth, identity, and image. That’s my priority.” 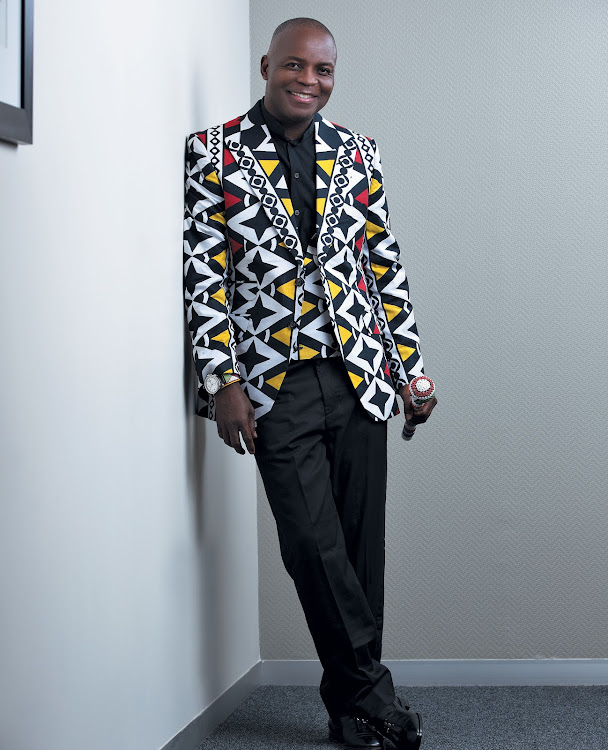 Africa meets the West is Ikalafeng’s “typical global-African style”. His bespoke jacket and waistcoat, laid over a crisp, black Zara shirt, are made in Angolan Samacaca fabric by the Angolan-South African designer Antonio Ambrosio. Hisdrawstring pants, “part of a suit”, are by Nigerian designer, Yomi. The Kenyan Maasai watch strap designed by Trevor Stuurman, is tastefully paired with his Cartier Calibre watch. He finishes off this international mix of apparel in classic, leather shoes from Christian Louboutin.

Favourite restaurant Signature in Morningside, owned by my friend Desmond Mabuza, for fine dining; and Sakhumzi in Soweto for home-inspired dining.

Favourite city Kimberley. That’s where I was born and inspired to think bigger than my circumstances. I’ve visited more than 100 cities, but most of them don’t have the grit, aroma and intoxicating pulse of Lagos, Nairobi, Accra, Casablanca, or Johannesburg.

Favourite book Things Fall Apart by Chinua Achebe. It is a sign of our times.

Most treasured style item My beaded laptop bag and hats designed by the craftswomen from Esther Mahlangu’s KwaNdebele homestead.