Sophisticated, simple, exquisite: Seaside escape Plett is the place to be, and be seen

Plett. It never goes out of fashion. Ever. Emma Jordan caught up on the gossip, the news, and spoke to some locals 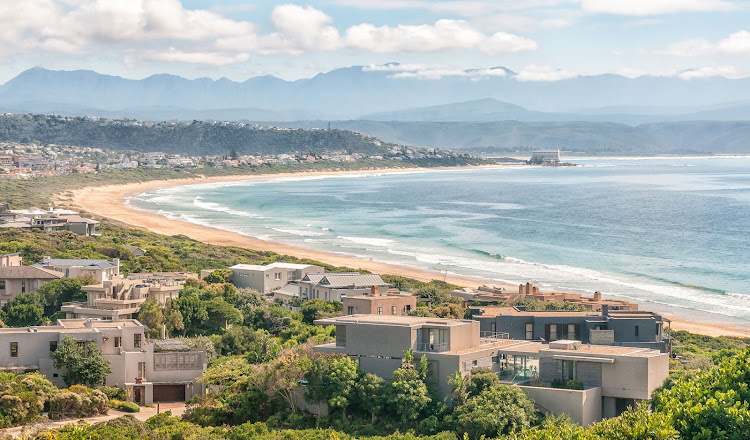 "The thing about Plett is it’s very difficult to get to,” says Julian Treger, CEO of Anglo Pacific Group and a Plett regular. “It’s very private. It’s like the Saint-Tropez of South Africa, but because it’s not easily accessed, it’s more mysterious, and simpler in a way.”

Treger’s beach house, the enigmatically named K Cottage, is anything but simple, rising from the Keurbooms like a spaceship dominating the horizon. It is here he hosts an annual Zumba party. “It’s all about Lycra and champagne on the cliff tops,” he says, totally deadpan. “There’s a mixture of local and international people, beautiful kids, business moguls, and politicians — the usual rainbow mix.”

Lucille Lewin, the artist and former owner of UK fashion chain Whistles, agrees. “There’s a very nice social scene — lots of international and local people who would rather avoid the crowds of Saint-Tropez and spend their time in a much simpler way.”

“People tend to socialise at each other’s houses, which means if you’re looking for a glitzy show-off experience, you’re not going to get it,” says Murray Crawford, longtime Plett regular and husband of interior designer Serena Crawford. However, when asked about the big money swishing around the place, he says Beachy Head is like a “big, dick-swinging competition” — status may be subtly discerned, but it’s certainly evident.

“As the older houses are sold, they are torn down and huge mansions put up in their place,” he adds. “It’s not always about style; it’s more about who can do something better than their neighbour. And, of course, you have to be on the beach side of the road — if you’re across the road you may as well be in Siberia.”

The latest big-ticket sale is R30-million for a piece of land in the crook of the Robberg peninsula, up the other side of Beachy Head. The property was damaged in the 2017 fires and, according to the agent who worked on the sale, the owner got a measly R5-million insurance payout. So, he comes out with R35-million and the new owner has a clean slate on which to build. Another property damaged in the fires was Clifford Elphick’s iconic wooden house. 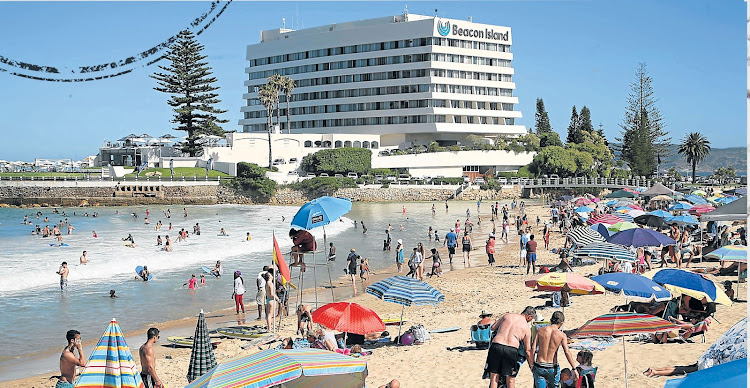 Elphick, owner and CEO of Gem Diamonds, also owns Kurland, the stately property that was, in many ways, the hook that originally drew South African and the international who’s-who down to the area.

“Plett has always had a cachet,” says Peter Behr, grandson of Baron Peter Behr and current Kurland resident. The Behr family originally owned Kurland before its sale to Elphick. When they moved here in the 1940s, they would often have guests from all over the world.

Adds Crawford, who was best mates with Peter’s father, Nicky Behr: “[Baron] Peter and Ena had an immense circle of friends and acquaintances. There was the local squirearchy, Joburg and Cape Town ‘society’, and the Russian/Polish émigré community. All three groups included legendary characters.”

“Out of season I wake up to this incredible light and freshness that comes in from the Antarctic,” says Lewin. “The light is so clear and sparkles off the sea. It’s really an exquisite place to be. When I’m there, everything seems to be at peace in the world.”

Is this why big shots continue to invest? While the rest of the country has the jitters, former Sasol CEO Pat Davies is building a luxury off-the-grid mansion in the Crags, designed by local architect Paul Oosthuizen. It’s not, by local standards, being created for small change.

He’s just one of many internationals who will even now happily sink a few million pounds into a rolling estate, rather than a Chelsea box room. “R20-million is an entry-level property price on Beachy Head and it buys a pied-à-terre in London,” says Crawford. “It’s dirt cheap. You see these guys who have sold up wherever they live, mostly Joburg, but they always keep their places in Plett for their annual reunion every Christmas holiday. We used to do it. We were living in Australia and we’d come back to Plett to our place on the cliff. Our children got to socialise with a really sophisticated mix of international children, with whom, to this day, they’re still friends.”

Treger echoes this: “I see people from Plett now during the year in different parts of the world; it’s like a global network of people in Europe, in the US, it’s very nice.” 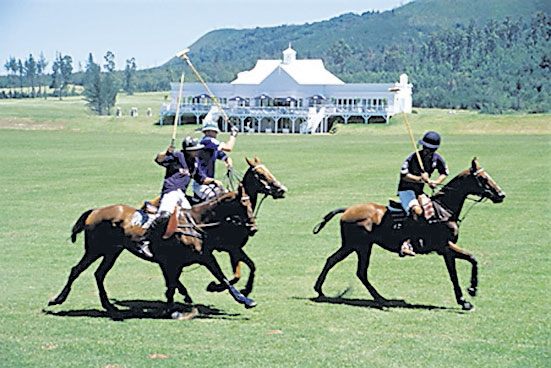 This is still, however, not a place where many wealthy black South Africans choose to holiday. Ghanaian businessman Harold Awuah-Darko keeps his polo ponies on an estate next to Kurland. Jetting in and out for the season, he brings an international group of friends and family with him. Maponya Developments owns retail space on the main road, and an unnamed Joburg businessman is the new owner of a condo at 1 Beachy Head, an almost-there address.

But to say it’s entirely unaffected by the mood in the rest of the country is inaccurate. According to a report released by Lew Geffen Sotheby’s International Realty, Plettenberg Bay broke the R1-billion in property sales mark in 2016 and 2017, but last year fell just short of this. And it looks like 2019 will be substantially lower.

“There’s a 40% decline in property sales compared to 2018,” says Steven Neufeld of Lew Geffen Sotheby’s. “Prices have remained the same, but sales have dropped.” This drop is not insignificant; one interpretation is that it’s merely a decline in sales for entry-level properties. As recent history shows, the upper echelon appears to be immune. The deeds office is still full of trusts — Lubners, Barlows, Bermans and so on — whose children and children’s children will continue to own a little hideaway in the beautiful bay, maintaining their clique of summer holidays and simple-yet-sophisticated soirees. As one local resident puts it: “Plett offers the best of South Africa.” Another says: “Plett is a town of kings. I mean, the airport is mainly for private planes.”

If you’re not a homeowner, or have overspill over the festive season, there is only one place to stay, and that’s The Plettenberg. One of late hotelier Liz McGrath’s oldest offerings, the 35-room hotel above Lookout Beach is a perfect encapsulation of the sleepy holiday town. The air is softer, the sea laps quietly a few hundred metres away, the staff are serene, and the food and drink sublime. This is a place where you can wake up in the morning, take a barefoot walk to the beach, collect a pansy shell or two, see a dolphin, and have a dunk in the ocean — all before breakfast. 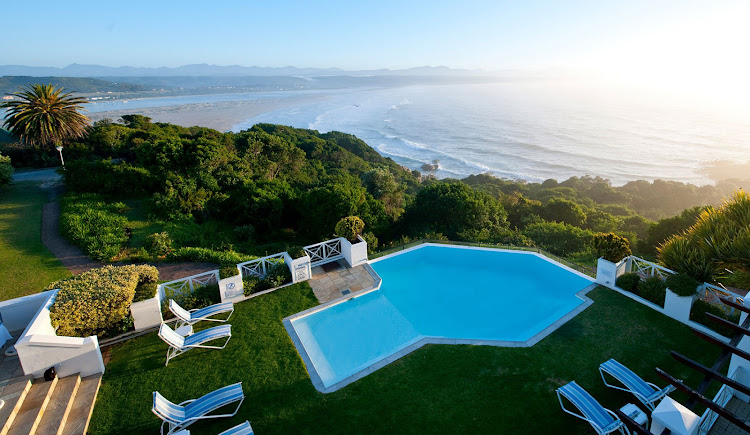 View from the top The Plettenberg.
Image: The Liz McGrath Collection

Under the stewardship of MJ Birch (former operations manager of Ellerman House in Cape Town), The Plettenberg is growing gracefully into the epitome of barefoot luxury. Birch has made it his mission to ensure the old lady has a sense of ease about her. Children are welcomed with open arms and gifted a bespoke mini toiletry and activity kit, and cupboards are bursting with beach toys and holiday accoutrements.

For those wanting hotel service, but with more privacy and space, The Plettenberg now also has two private villas attached to the main hotel: both the Lookout Villa and the Beach House have their own pools and can be run as private homes or fully serviced hotel suites.

An easy year-round escape, The Plettenberg is effortlessly sophisticated and simple; very much indicative of why “everyone” keeps returning to the little town on the bay.

With crazy décor and a super simple menu, Golden Palm is a refreshing and original new dining experience in beautiful Plettenberg Bay
Food & Drink
4 years ago

A phoenix rising from the ashes: Knysna's spirit revived

Destroyed after fierce fires raged through the town last year, Matthew McClure visits this year to see the remarkable spirit of the locals come ...
Travel
3 years ago