Meet a new breed of cowgirl

Karoo farmer Julie Truter would loathe the comparison, but my first impression is that she is the perfect embodiment of designer Ralph Lauren’s highly romanticised vision of the American West.

Truter certainly doesn’t fit the traditional stereotype of a South African farmer, and she is smart enough to know that’s not a bad thing, because this 30-year-old is on a mission to create a new generation of professional farmers, and if she needs to put herself out there as a poster girl for the cause, so be it.

She fervently believes that making farming a viable option for ambitious young professionals is crucial to ensuring South Africa’s future food security — no mean feat in a country where farming is anything but sexy, and murders, land claims, and drought are part of the national discourse. Given the current global environment, when more people than ever are leaving the land in the hope of a better life in cities, one has to ask: who in their right mind would give up a cushy corporate job, with all the benefits that implies, to go farming?

The extraordinary power of absolutely nothing

Well, Truter for one, and she’s determined prove that being a farmer is a viable 21st century career choice. To that end she left a promising career in banking and created Karoo Ranching, based on a farm an hour’s drive from Graaff-Reinet, with the sole aim of showing corporate city slickers that with the right attitude and business model there is money to be made from ensuring South Africa can feed itself in the future.

Spend five minutes with Truter and it’s clear that she is evangelical on the subject. This might all sound like pie-in-the-sky idealism except Truter has form: she is the youngest in a long line of Karoo farmers, on both sides of the family, and the farm, Elandskloof, where Karoo Ranching has its home, belonged to her maternal great-grandfather, Samuel McNaughton.

So, it’s a homecoming of sorts, and it’s taken more than a little guts and determination — and a few tears — to resurrect Elandskloof, which had been untouched for 40 years, as a viable cattle farm. In the long term, Truter’s ambition is to get public and private support for a business model based on Ranchising, a sustainable farming concept pioneered by Finnish company, Goodmood Highland, which involves would-be farmers investing in a farm on a franchise basis, with all the internal and external support that business model implies.

But first, Truter realised, she needed to create a working ranch where potential corporate sponsors and farmers could experience the business of farming themselves and get to grips, literally, with the vital role farmers play in food security.

Which is why Elandskloof, once a prosperous beneficiary of the 1950s Karoo wool boom, has been reincarnated as a dude ranch that would, indeed, not look out of place in a Ralph Lauren TV ad. 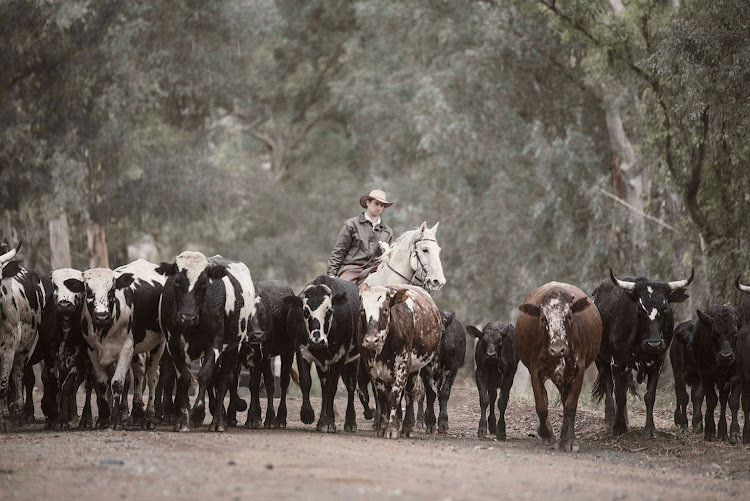 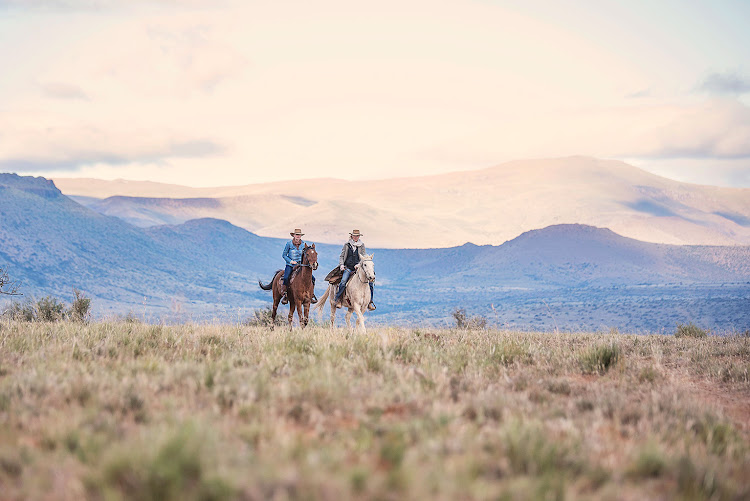 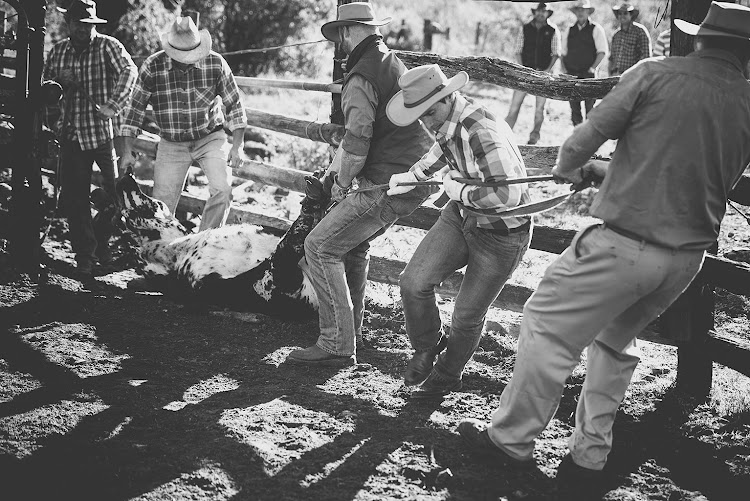 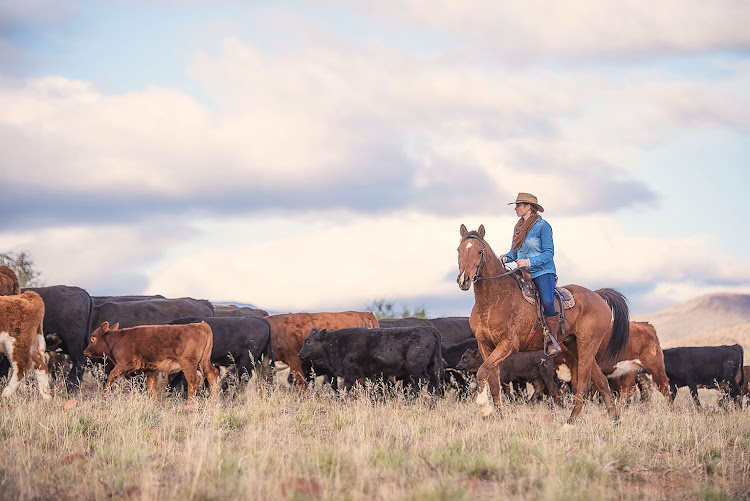 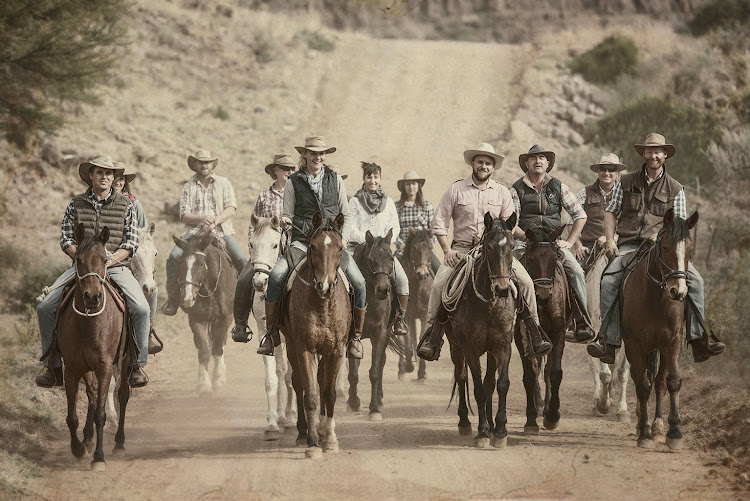 We reached Elandskloof well after dark, which was just as well, as the 24km journey from the main road is not for the fainthearted, nor those not in possession of a sports utility vehicle.

A corporate group from Johannesburg, which has spent the past week herding cattle and working the farm on horseback and on foot under Truter’s watchful eye, are having a raucous last supper in the “new” house built by her grandfather, Haig McNaughton. They have clearly had a wonderful time, and will hopefully be spreading the word. We are billeted in the original farmhouse, which is large, with good bones, but few frills. This was a house built to do its job and a reminder of a time when farming was not a “lifestyle” choice.

In the morning, Elandskloof reveals itself. We feel miles from anywhere, surrounded by hills that recede into infinity. It is winter, but the sky is blue, softening the khaki colours of the landscape. A single railway line runs through the farm. Trains, we are told, hardly pass this way, and haven’t for years, but in the old days, during the wool boom, the railway was a vital artery. Perhaps, if Truter has her way, it will be again.

We meet Truter’s parents, and immediately understand that farming was perhaps less of a choice and more of an inevitability for her. Jimmy and Diana Truter farm several hours’ drive away, but they are here to help their daughter. We share breakfast with them. Jimmy is tall and solidly built, his hands and workwear revealing that he has been out checking fences and livestock, ensuring the cattle are properly watered.

The drought has meant that water resources are scarce. The Truters have farmed all their lives — Diana, one of four daughters, inherited Elandskloof because she was the only one who married a farmer and wanted to farm the property. They have worked hard — still do — and it’s clear that wool booms are very much part of the past. At the same time, their love of the land is unambiguous and it’s impossible to imagine them anywhere else.

After we leave, we discuss Truter’s ambition to make farming “sexy” again, and we can’t help wondering if any of the corporate team that have just spent the week being cowboys would have the wherewithal to leave corporate life for a farm. Probably not, but if even a few of them leave with a better understanding and a new respect for the Jimmy Truters of this world, then she would have done her job. karooranching.co.za

Get lost in Kenya's wilderness at Campi Ya Kanzi