A "honeymoon" in Vietnam with your best friend? Hell, yes! 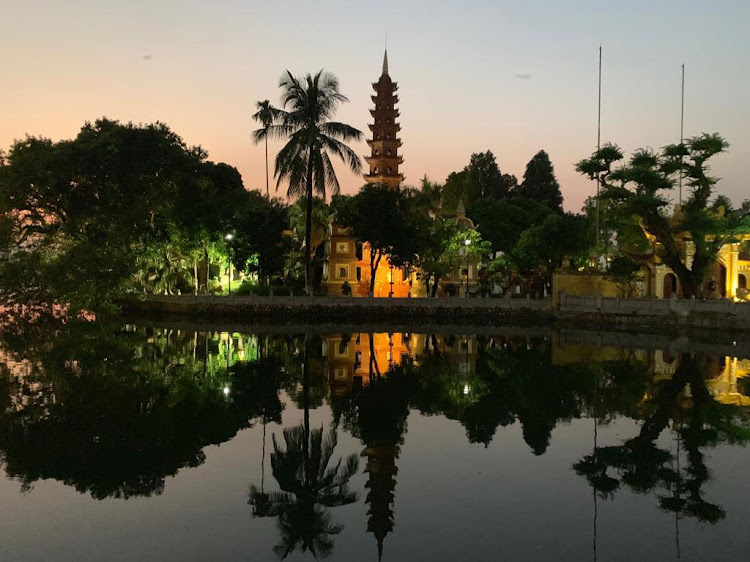 In the summer of 2019, I went on holiday to Vietnam. Okay, it was a honeymoon. I went on honeymoon even though I had recently been divorced. It was something I had always wanted to do, and while I had no regrets about the divorce, I did feel as though I had missed out on the opportunity to take a celebratory holiday. The thought of planning a trip with adventures, food, and beautiful hotel rooms — and the fact that I had missed out on that — was the small happiness I fixated on in order to ignore the magnitude of the larger disaster.

I told my friend Matt all of this over one of those surreal, long-distance phone calls where one person is waking up while the other is getting ready for bed. He lived in Vancouver, which is geographically as far away as a person can go from South Africa before they start heading back.

We met in 2016 on the dancefloor at a Halloween party and we clicked right away. He was wearing a hat and said he was dressed as Indiana Jones; I was not dressed up and said so, and our shared disdain of dress-ups was the first thing that made us connect. Our friendship has always been completely platonic, though people do wonder. Our friendship is powered by equal parts gossip, self-deprecation, truth telling, and a profound gratitude at being understood so easily by another person. Fast-forward three years: I was enduring the aftermath of the breakdown of a marriage, and Matt was struggling with accepting his sexuality and integrating it into his life in Canada. We were both struggling with perception and self-judgement.

A trip into the rich history of Cambodia

On our call, we bemoaned the fact that a honeymoon was a long way off for either of us. So, we decided to go on one together. Both of us felt as if we were just existing in the world, passing through each day without any real joy. We were in a funk, and needed to break out of it. All great romantic endeavours have been covered in romcoms, and so for some guidance we turned to the 1997 classic My Best Friend’s Wedding, in which Rupert Everett consoles Julia Roberts by telling her: “What the hell, life goes on. Maybe there won’t be marriage, maybe there won’t be sex, but, by God, there will be dancing.” This was the motto of our honeymoon.

The trip arrived and we met in the airport in Ho Chi Minh City, then took a taxi into the centre of Vietnam’s most populous city. The buildings were square and white, laid out on a regular grid, as orderly as smiling teeth in a mouth. We dropped our bags off at the hotel before seeking out our first bowl of Vietnam’s national dish, phở. It’s eaten in the heat and humidity all year round, for breakfast or lunch. At Phở Hoà Pasteur, we ordered big bowls with raw, sliced beef fillet topped with a slick of green onion oil and served with a platter of local herbs and sour kumquats, intended to be added as you eat. As I blanched the herbs in the silky broth and slurped up the noodles, the star anise and chilli hit the back of my throat. We spent the afternoon in a Vietnamese art museum, drinking condensed-milk iced coffee, before returning to the hotel for a couple’s massage and a movie night in big, fluffy hotel bathrobes. 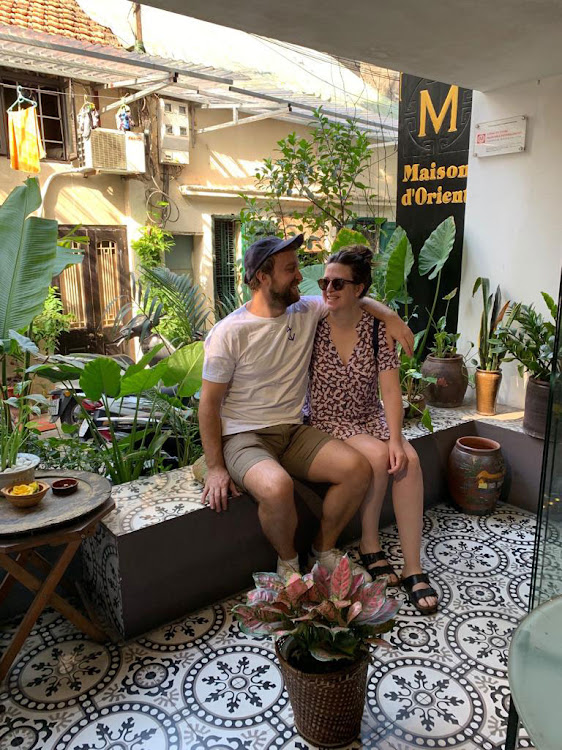 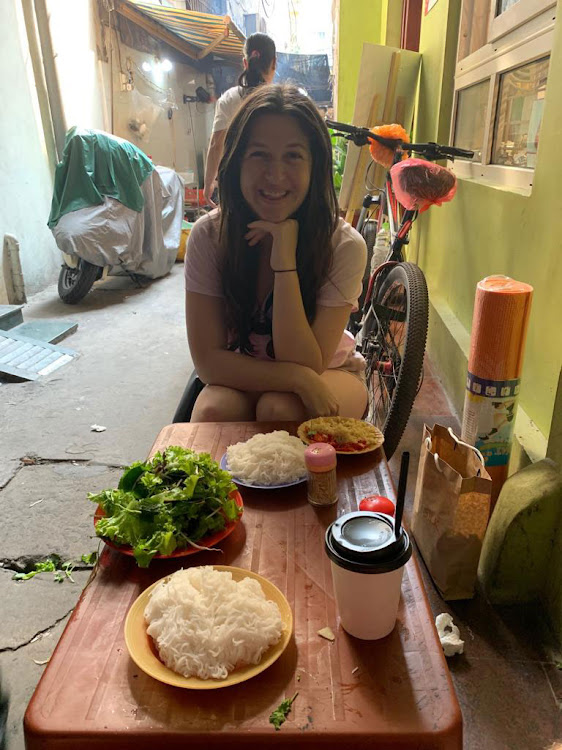 The next day we headed out looking for bánh mì (a Vietnamese sandwich), cycling to an iconic shop that had been open for 80 years. Bánh Mì Båy Hô was a hole in the wall, and in its dimly lit interior we devoured crusty baguettes with sizzling plates of pâté and beef, crunchy pickles, and tender coriander stems. It was so good we each ate two.

Then we headed for Hanoi — an old city with French tenement buildings and tropical vines. We stayed in the French Quarter, in a boutique hotel with blue shutters and bougainvillea. On the first night, we went out and drank too much. It began in a civilised wine bar drinking a crisp bottle of Chablis before a dinner at Chå Cá Thang Long, where we had turmeric-fried fish with dill and green onions. The dill is the vegetable, and it’s transcendental when treated this way. However, by the end of the night we were in a dingy bar drinking Frangelico (why?!) and telling each other all our secrets. We bought matching granadilla-patterned outfits and went dancing. The next morning, we hunted for a local delicacy — egg coffee — in a secret spot named Café Giang. Rich and sweet, we both loved it at first but by the time we finished we both felt queasy and did not have it again. 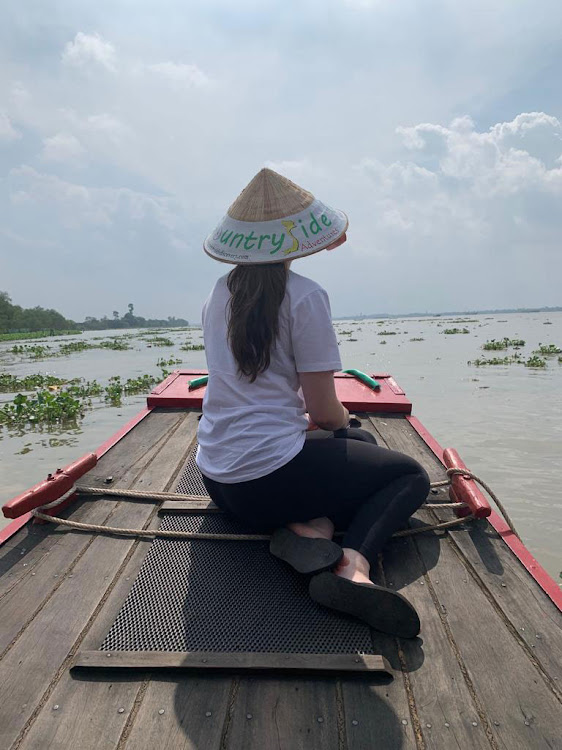 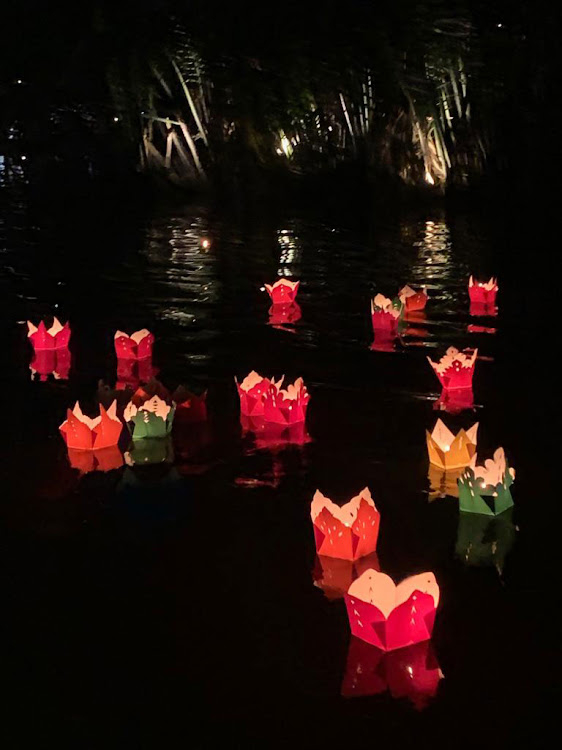 Hội An is a city on Vietnam’s central coast, known for its well-preserved old town and picturesque canals. The former port city’s melting-pot history is reflected in its architecture — a mix of eras and styles — from wooden Chinese shophouses and temples to colourful French-colonial buildings, ornate Vietnamese houses, and a Japanese bridge. In Hội An, we cycled everywhere. This is the tailor region of Vietnam, and we both had plans for extravagant clothes. 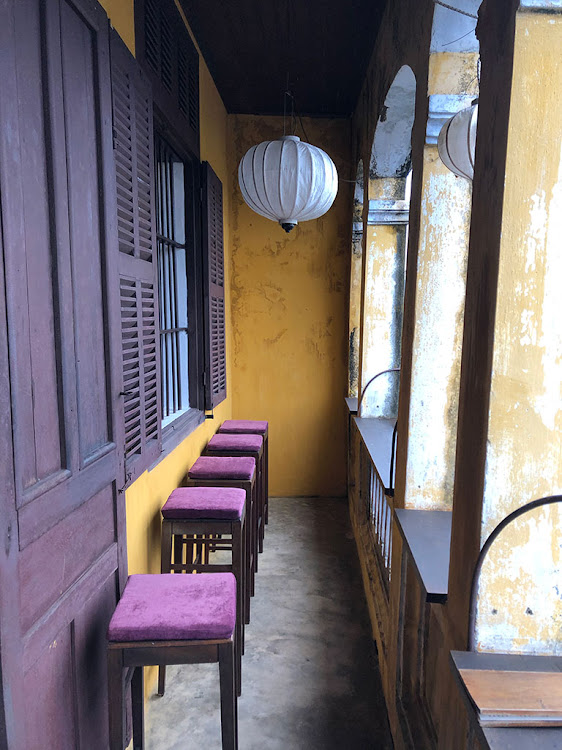 We designed ourselves entirely new wardrobes. Mine consisted predominantly of fine silk dresses that were hard to care for and needed to be dry cleaned. Matt chose an array of incredible tailored suits. Neither of us really live like this — the clothes were impractical and beautiful. They felt wonderful and we love them still. Our favourite spot in Hội An was a gemstone museum. A private collection of antique carved gems decorated the walls, set into recesses in dark wood panelling. On the second floor there was a veranda. We drank a bottle of wine in the luxurious seclusion, overlooking tourists passing below as the day changed to night and Hội An lit up with paper lanterns. “Well, it’s not a gemstone museum,” became the benchmark against which we rank the enjoyability of new places.

Towards the end of the trip we went on a mountain hike to a Buddhist pagoda. At the pagoda we found a kumquat tree covered in fruit. The sour kumquats were ubiquitous and served with every meal here. By this stage I relied on waking up my meals with their sweet-and-sour tang. I felt awake by being in Vietnam; awake to life’s possibilities, and to my own joy and potential. I picked a kumquat and carefully saved the seeds. I planted them when I got home.

Sarah Buitendach went to Marrakech to visit Musée Yves Saint Laurent, stumbling across the gorgeous gardens along the way
Travel
2 years ago

The Idler Philosophy Retreat in Lippiano, Italy, wants you to slow down, have fun, and live well
Travel
1 year ago

Gillian McLaren hits the bucket-list big-time on a thoroughly exotic, luxury adventure along the Amazon River
Travel
2 years ago