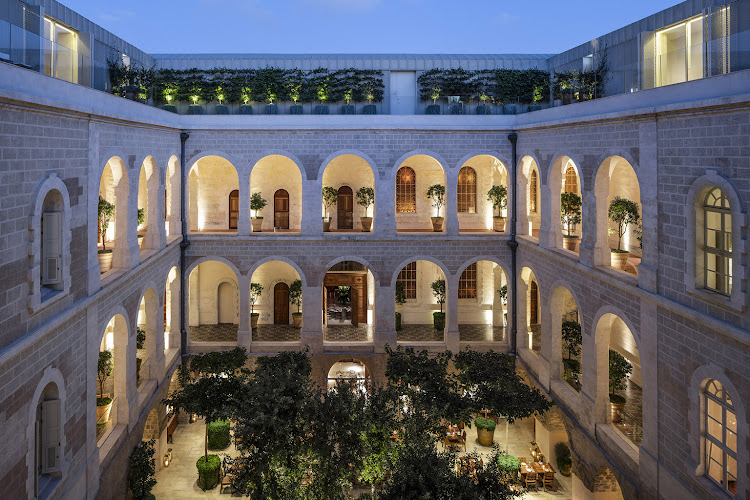 As you walk from the bustling streets into the cool, minimalist lobby of The Jaffa hotel, you are confronted with a Damien Hirst painting, some chic Shiro Kuramata sofas and the rough stone remnants of an ancient curved wall.

In a project that has taken nearly a quarter of a century, this luxurious hotel has been carved out from an old convent and hospital that stood on the site since the 1880s but the wall — built by 13th-century Crusaders — is a striking reminder that this is ground steeped in far older history.

For two millennia, Jaffa’s port had been the gate to Palestine, changing hands between Saladin, the Crusaders led by Richard the Lionheart, the Mamluks, the Ottomans, the British and finally, Israel, which gained control of the once-Arab majority town in the 1948 war. (A small Arab population remains in Jaffa, today the southern tip of the Tel Aviv-Yafo municipality, but they are the minority now.)

Can a revamp of Paris’s only Left Bank grand hotel retain the soul of a building that holds an extraordinary place in French history?
Travel
2 years ago

The resulting riot of architectural and commercial exuberance has created a port like no other on the Mediterranean, dominated by an Ottoman-era clock tower and home to Tel Aviv’s hippest young residents. A decade of gentrification has turned abandoned warehouses into art studios, storehouses into boutique bakeries and a once-gritty working port into a pedestrian promenade lined with yachts and apartments with stellar views (and matching prices).

The Jaffa, in contrast, has a more tranquil feel. Originally home to the nuns of the Sisterhood of Saint Joseph, a French order, and a hospital where they took care of ill pilgrims, the building’s façade gives little clue to what lies within — a sprawling courtyard shaded by mulberry trees, a swimming pool and an obscenely beautiful nightclub and events space housed in the desanctified chapel of the convent. The hotel itself has 120 rooms — 40 in the renovated old wing and 80 in a newly built wing, some of which have views on to the sea. The new wing also has apartments for sale, with the largest listed at $60m. 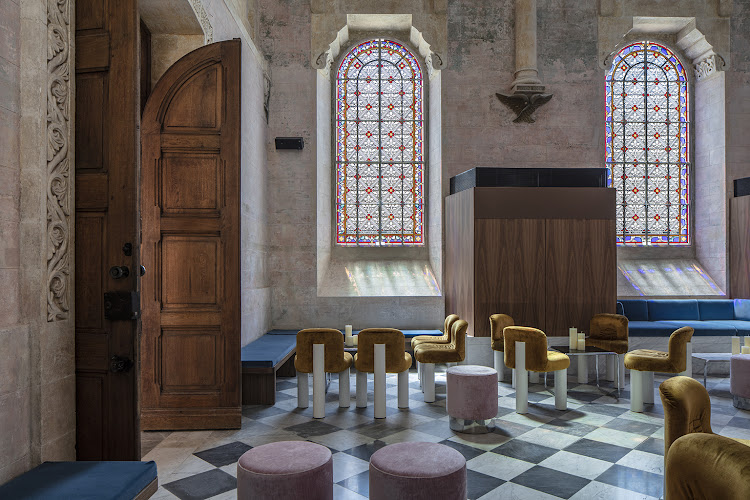 The project’s architect, Ramy Gill, who grew up in Jaffa, swells with pride as he tells me how he wrangled building permissions from cautious city officials, while carefully trying to preserve the original architectural elements of the chapel and hospital. As he excavated thousands upon thousands of truckloads of earth, he tried to “echo the geometry of the alleyways around us”, while exposing the foundations of the building to create more space.

But he also suspected, given his experience of working in Jaffa, that as they dug, they would find layers of the city buried beneath. Using centuries-old hand-drawn maps, he realised that the building was standing on a moat and wall from around the 13th century. A careful excavation revealed one of the only ancient circular walls in the Middle East, a method of building brought to the Levant by the Crusaders, but also architectural artefacts going all the way to the 4th century. “The first thing the antiquities authorities said to us”, he chuckles, “was, ‘Stop, don’t touch it’.”

Eventually, he prevailed and was able to dig out entire new floors, with the courtyard for a restaurant and the swimming pool sunk below the surrounding street level on the spot where the nuns grew Jaffa oranges. Most of the hotel’s offices and infrastructure are even further underground. 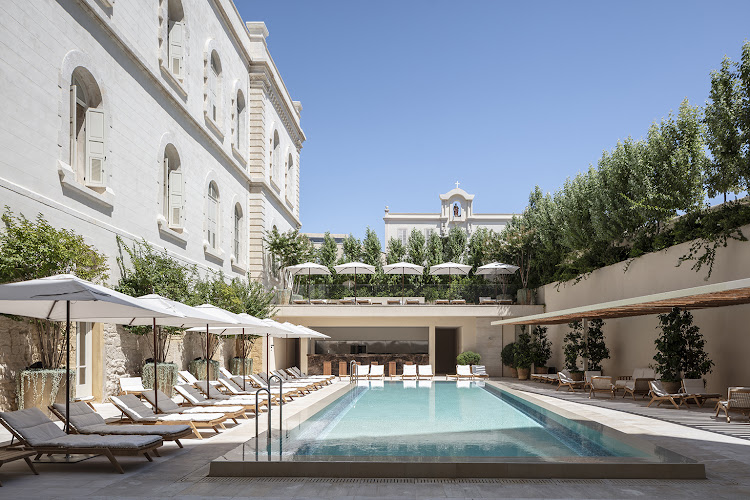 The hotel is owned by Aby Rosen, a Manhattan-based developer to whom the Sisterhood of Saint Joseph granted a 110-year lease of the land. While Gill was busy digging, Rosen was luring celebrated British architectural designer John Pawson to join the project. Pawson had already worked with Rosen on the renovation of parts of New York’s Gramercy Park Hotel, and by 2006 he had visited the site in Jaffa. He quickly realised that while he would have free rein to exert his signature minimalist style in the new wing, he would have to be more flexible elsewhere. “The new wing and the new bedrooms show a sort of sensibility of a modern type of restraint,” he says. “But on the existing building, you’re taking cues from what was already there.”

My junior suite came with a Pawson-designed bed that looked on to a massive mirrored cube, which took up about a fifth of the room and housed the bathroom and, hidden behind the glass, a TV (“such ugly things,” says Pawson.) 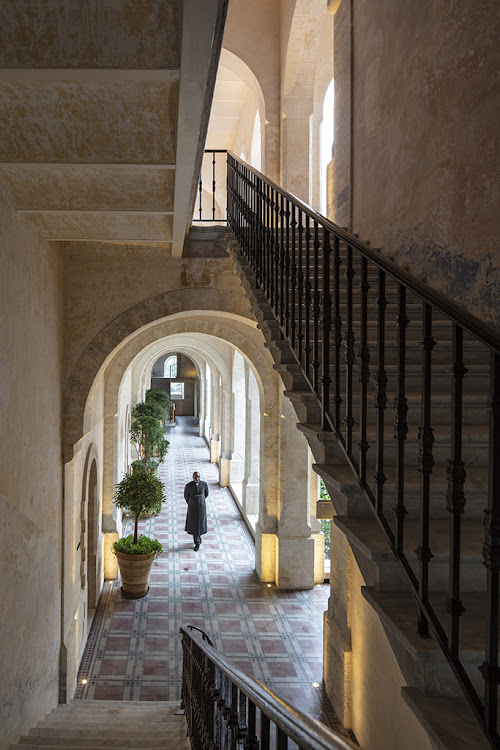 Israeli hotels often have a rather flashy, conspicuous side to them, and Pawson admitted to having to put his foot down to make sure the design remained restrained. “Some people think a wall is something to hang pictures on,” he says, when pushed for an example. When you walk around the hotel, you see that’s an argument he won. Perforated metal screens that recall Arab wood-carved mashrabiyas are all that adorn many of the walls. “Handled differently, I suppose it could all have been far more ornate,” Pawson says.

The hotel opened on August 20 and when I visited earlier this month, it was just starting to stretch its legs. Only about a dozen rooms were full, though checking out still took 20 minutes. A few friends joined me for dinner at the hotel’s restaurant, Don Camillo, a sort of homage to the homey Italian eateries of mid-century New York. With an ambitious wine list and a bit of reputation as the hot new restaurant in town, the place buzzed on a humid Saturday evening.

Earlier in the day, Gill had taken me to look at the most spectacular part of the renovation, the chapel, with its striking powder-blue vaulted ceiling and stunning stained-glass windows. It had been through a complete desanctification — all the Christian icons have been brought down (and replaced with posters of famous film stars as priests), and the remains of a pastor were moved to the Vatican. Its marbled floors now show off three-legged Botolo chairs from Italian designer Cini Boeri, and a giant bar stands where the altar would normally be. Waitresses wear an outfit with a neck that resembles a nun’s habit but which ends above the knee. 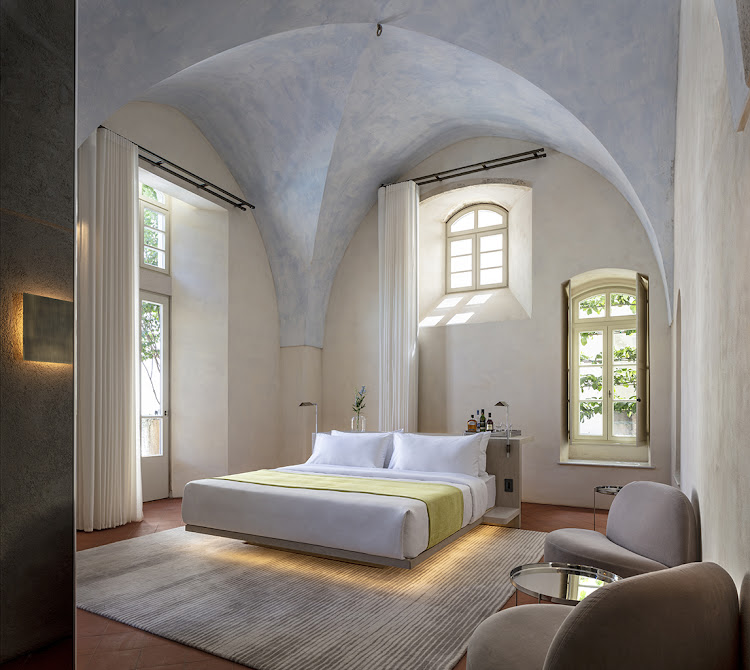 A bedroom in the old building.
Image: Amit Geron

When I returned after dinner, I found long queues (note to guests staying in a $1,600-per-night junior suite: that alone is not enough to get you on the guest list). Instead I took a walk around Jaffa. It was late but the streets were still full, with people spilling out of restaurants and into bars. Around the corner from the hotel stood a tiny bar filling with off-duty waiters. Salsa blasted out on the speakers, and couples danced on a floor smaller than my suite’s bedroom. The bartender handed me a free shot, and the DJ, spotting me as an Indian, put on some Bollywood music.

It was a reminder that in the heart of the old port, colourful and riotous, The Jaffa is a rarefied addition, an oasis from the city outside, while still being deeply entwined with its history: an expensive, but delightful escape.

Mehul Srivastava was a guest of The Jaffa hotel, which has double rooms from $550. Access to the chapel is free for guests but they must email to reserve in advance

In the island’s quieter south-west, new villas are mixing mod cons with traditional touches — and glorious views of unspoilt beaches
Travel
2 years ago