In the island’s quieter south-west, new villas are mixing mod cons with traditional touches — and glorious views of unspoilt beaches 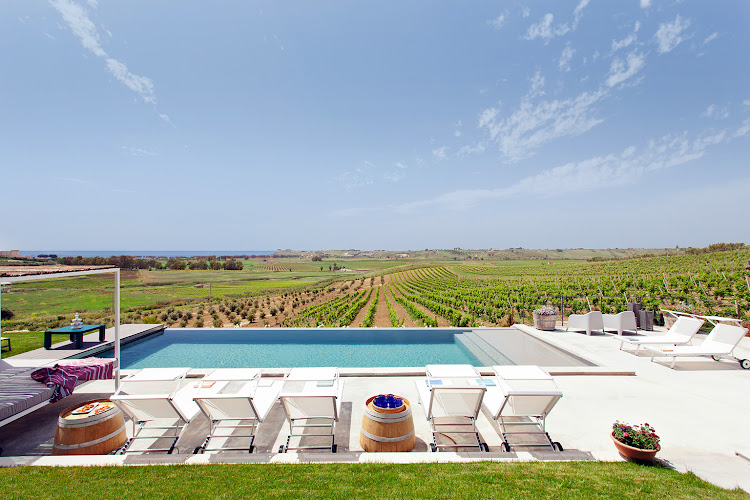 “I like it best in this part of the island. No crowds, no discos, just beautiful beaches, great wine and oil, and this!” says my guide Marco Falzone, pointing dramatically towards the Temple of Zeus, in its spectacular spot looking out to sea.

We are on a tour of Selinunte, one of the most important ancient Greek sites in Sicily, and this is the culmination of our visit — a stunning acropolis built on a hilltop in the 4th century BC, strategically positioned for trade routes to Africa and beyond. White butterflies are dancing around the boulders of yellowy grey chalky stone, softened by grasses dotted with wild flowers and the odd wheat sheaf that has drifted over from the nearby durum wheat fields.

“It’s incredible here,” continues Marco with a rare enthusiasm for someone who has surely taken innumerable parties on the very same tour. He stops on the cobbled thoroughfare through the acropolis and gently kicks over some rubble. “You can still find the odd bronze coin.”

While the ruins of Selinunte and nearby Agrigento are obvious draws, the south-west of Sicily remains the most unspoilt and untouristy part of the island, even mysteriously so, given — as Marco so succinctly outlined — its allure. Why is that, I ask? “Sicilians are lazy. They like beaches with sunbeds, they don’t like to walk far from their cars to the sand.” 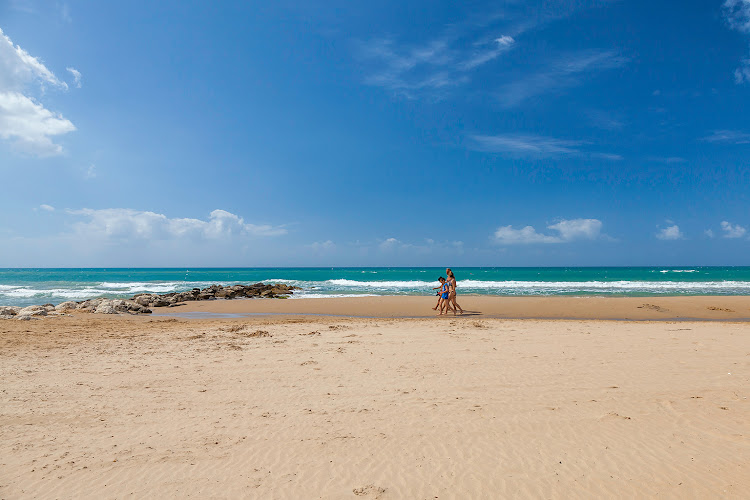 If true, this would explain why the miles and miles of untouched sandy beaches sweeping up the coastline here are so deserted, even in high summer. Unlike the rest of the Sicilian coast, there are only a handful of lidos — paying beach clubs with sun umbrellas and loungers — and aside from that, beach access often entails wading through tickly long grass and a scramble over a sand dune. There may not be much in the way of natural shade, other than umbrella pines beyond the dunes, but bring a parasol and a picnic, and you can often have the beach to yourself. And the sea, limpid and warm, is everything you dream of from your desk in January.

Accommodation in the area is limited. Aside from a few basic hotels, big resorts are scarce, and there is none of the piano-bar glitz of Taormina and the east coast. And although the capital is only an hour’s drive away, the Palermitani tend to stick to its nearby beach hotspots, Mondello and San Vito Lo Capo. But, as a small discerning contingent of Sicilians, northern Italians and foreigners has recently discovered, the area between Mazara del Vallo and Agrigento is ideal second-home territory — reachable for the weekend from Palermo, and with its endless vineyard and olive grove vistas, an antidote to the capital’s baroque intensity.

The villa we are staying in, Angheli, has been named after its vivacious owner Angheli Zalapi, a Sicilian writer and art historian who, together with her husband Antonio Cognata, a professor of economics and general manager of the Teatro Massimo in Palermo, designed and built the place from scratch. On our visit, the paint had only just dried, and the pool filled up for the first time. It is rented through The Thinking Traveller, which has an increasing number of high-end properties in the south-west. 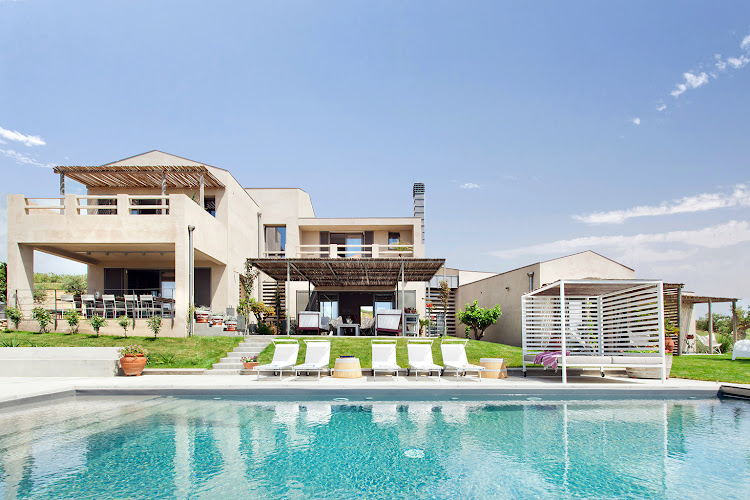 “We were quite specific in what we were looking for,” says Cognata of their project. “We thought of searching a piece of land between Menfi and Selinunte that was overlooking the sea, but also surrounded by vineyards and olive trees. It took 10 years to find the right place.”

Building a villa from scratch in a rural area such as this is not without its constraints. You have to maintain a certain distance from the sea and from other houses, and, mercifully, there are height restrictions. Many newly built second homes in the south-west have a modernist feel — built low and wide, rather than high. The optimum spot is on a hillside, for an ambient temperature that is one or two degrees cooler than sea level.

Angheli is positioned at the top of a slope, with captivating views across vineyards and fields down to the sea, a shimmering azure strip beyond the eucalyptus trees. Apart from the tangle of telephone wires, zigzagging across the plain, and the odd shepherd’s hut and derelict house, there is little to mar the view. It is only at night, however, when the lights start to twinkle on the other side of the valley, that civilisation reveals itself.

Zalapi and her husband wanted to combine traditional Sicilian elements — a courtyard and an enclosed garden, fragrant with lemon trees — with modern fittings, from a professional kitchen to huge floor-to-ceiling windows leading to the terrace and pool area. 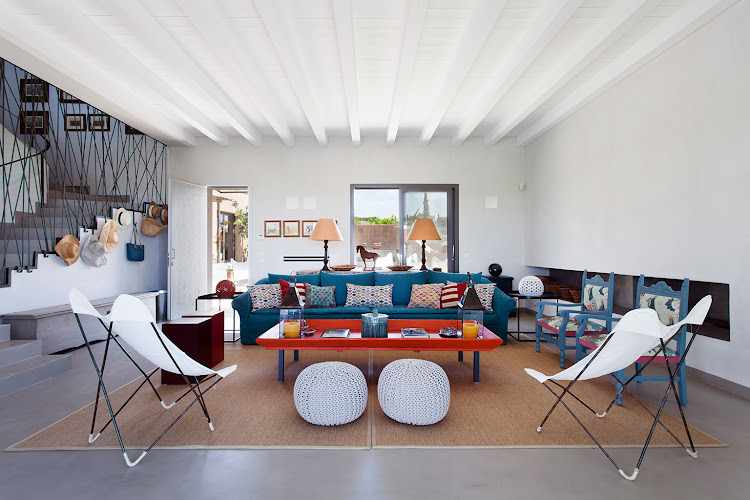 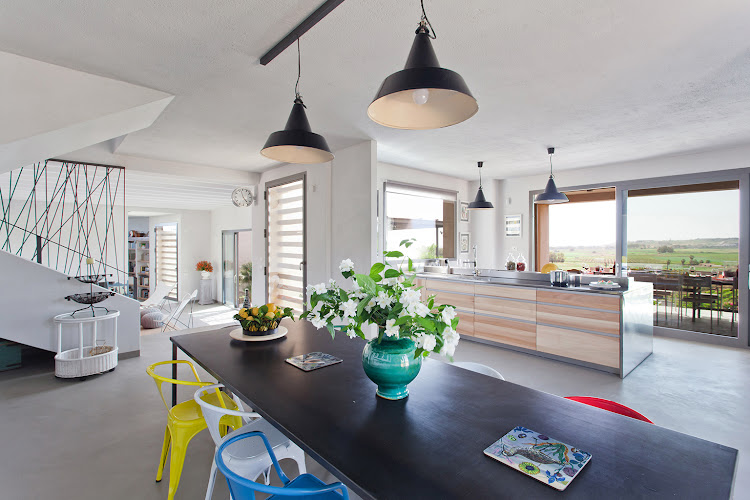 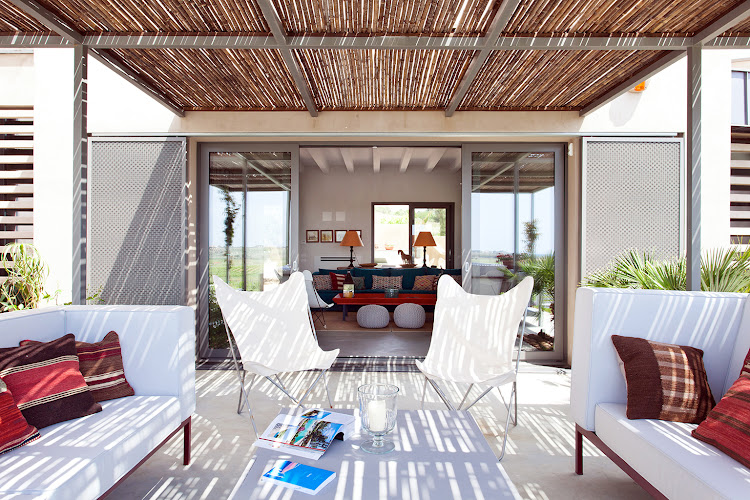 The couple had been looking for the right spot for so long that by the time they found it they had already assembled an eclectic range of furnishings, from giant lamps to a series of ancient maps of Sicily and some heirloom furniture repainted in teal and burnt orange. Padding around the villa on the soft concrete floor, flopping between poolside loungers, divans on the terrace, and the plush seating areas indoors, it is hard to drag oneself away from Angheli’s many comforts and its peaceful surrounds. I say peaceful, but there is nevertheless a rousing 24-hour chorus of dragonflies, cicadas, swallows and sparrows — and the odd mosquito.

Indolence sets in fast, so we headed out on our hired bikes to a restored 20km cycle path that was once a railway, and which begins just outside the local town of Menfi. We didn’t encounter another soul on the smooth, wide path, flanked by olive groves, banks of wild poppies and yellow flowers, until a Vespa unexpectedly cut across on a dirt track. The same white butterflies kept us company as we descended to the sea. There, a solitary beach bar had just opened for the season, and was blaring out last year’s summer hit “Despacito” despite being apparently empty; the rest of the stretch of coast was pristine — save the odd nonna taking a constitutional dip. To our surprise, the cycle path ended abruptly, presumably where the money ran out to restore it further, giving way to the old ferrovia winding its way on to the town of Sciacca. 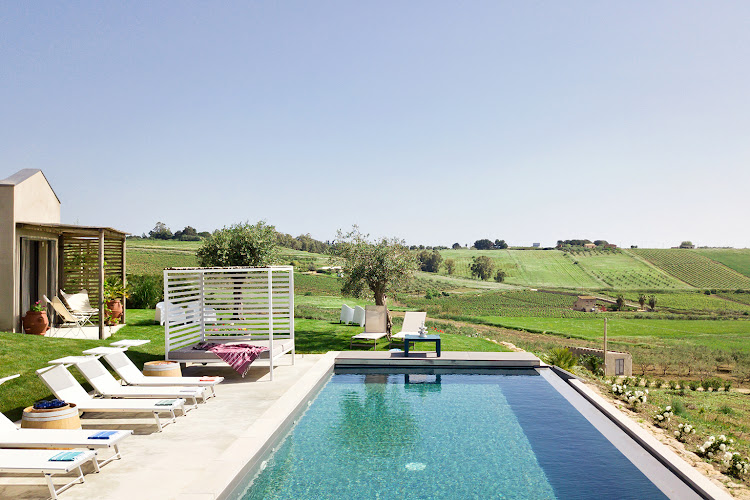 It is easy to end up on the wrong side of this typical Sicilian coastal town, with its narrow one-way systems and arbitrary observance of traffic lanes. Google Maps led us away from the centro storico to the port, lined with shanty-like workshops where fishermen were sluicing the pavements with buckets of cloudy water, the odd raw prawn sizzling on the tarmac. This fishy quarter is in fact home to perhaps the best granita bar on the island: octogenarian Zio Aurelio has been serving up lemon granita at Bar Roma for many decades. A plastic cup of the sweet, zesty iced concoction is reason alone to visit Sciacca — although it is reputed for its painted ceramics, which were a little lurid for my taste.

The pretty seaside town of Mazara del Vallo, on the other side of Menfi, has the largest fishing fleet in Sicily, and a daily fish market that perfumes the salty air. It is known for a special type of red prawn, trawled from a 700-metre-deep seabed, as well as another more mysterious attraction, also trawled from the ocean. In 1998 Captain Francesco Adragna and his crew were out at sea one night when, to their astonishment, they netted an ancient 7ft bronze statue of a dancing satyr, rising up head-first from the watery depths. This whirling figure, head thrown back in bacchanalian glee, has been dated to between the 1st and 4th centuries BC. Housed in a small museum and remarkably well preserved, it is one of the most enthralling archaeological finds on the island.

Ancient treasures aside, the south-west is best known as the region where rich Palermitani used to keep farms for oil and wine. Now, that mantle has been largely passed on to second-homers, producing small amounts of both, for personal consumption. Menfi is Sicily’s biggest wine region, where the winemaking Planeta family have worked the vines for 17 generations. Planeta’s classic chardonnay is produced in the region, and it is also home to the family’s boutique hotel, La Foresteria, a laid-back hilltop haven with restaurant, and a discreet guest-only lido down on the coast.

Tangled telegraph poles aside, the south-west has its pockets of luxury, which wine-loving foreigners have already cottoned on to. Google has been recently holding its annual three-day “Camp” at Rocco Forte’s Verdura Resort, near Sciacca, much to the excitement of the local press. One can just imagine a steady stream of choppers zeroing in on the helipad, Larry, Sergey et al talking shop on one of its two 18-hole golf courses, or languishing in its 4,000 sq metre spa. The tech company even hired out the temple at Agrigento for a spectacular dinner and concert, flying in the likes of Elton John, Lenny Kravitz and even Prince Harry.

But floodlit VIP extravaganzas aside, Marco the guide was right in his pithy summation of this glorious part of the island: “No crowds, no discos.” What more could you possibly want?

Rebecca Rose was a guest of the villa. Angheli is rented exclusively through The Thinking Traveller, and costs from €6,140per week.

Sometimes a holiday on someone else’s island simply isn’t good enough. If you have Richard Branson-style dreams, perhaps it’s time to look into ...
Travel
3 years ago