It was a dinner to remember - a €390-per-head gastronomic tour de force with a dozen courses ranging from foie gras with strawberries to the tenderest beef and a Grand Marnier soufflé. Meanwhile the sommelier presented accompanying drinks, moving seamlessly from sake to Saint-Emilion, with a cup of vintage Chinese tea and a glass of Normandy pear cider along the way. Excessive, perhaps, but this was Wednesday night and the Hôtel de Crillon had something to celebrate: the reopening of its doors after a four-year, no-expense-spared refurbishment.

The night had been long anticipated. Work was supposed to take only two years but had been slowed down by the rules that govern listed buildings, as well as by the scale of its ambitions. Among them, an entire new floor that was dug underground to house a 14-metre swimming pool, a newly designed spa that opens out on to a private garden, and a men’s barber shop (€55 for a beard trim, €80 for a haircut) where guests can have their shoes shined from the comfort of a 1960s Aston Martin car seat. 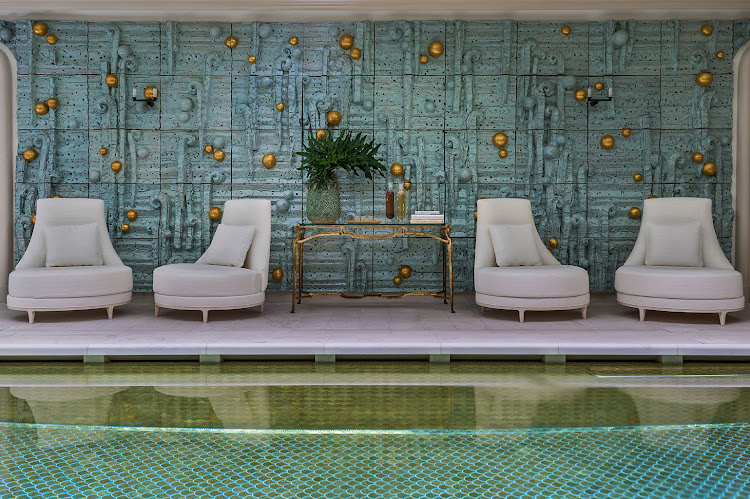 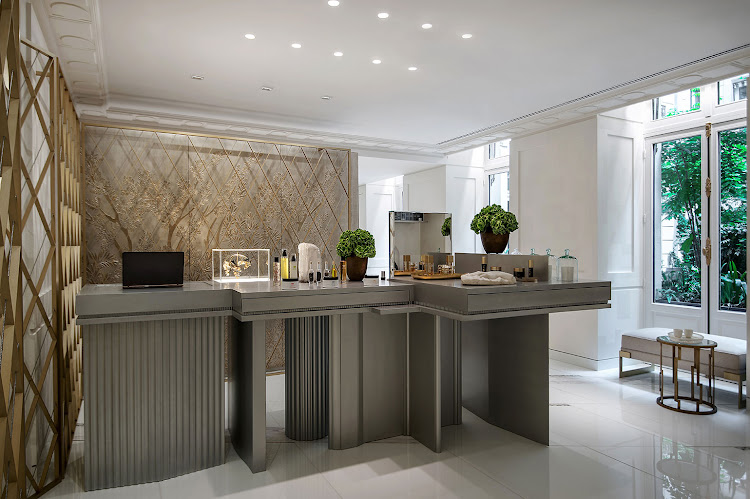 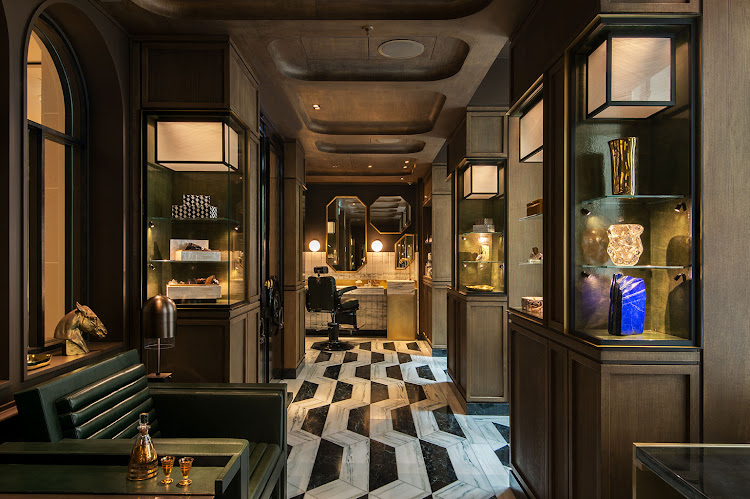 Guests arriving on Wednesday - the lucky ones in the hotel’s vintage Citroën DS - found their eyes drawn to the splendid gold-and-marble room on the right of the entrance. In its previous life this was the hotel’s celebrated restaurant, Les Ambassadeurs. Now it is a bar of the same name, where the original frescoed ceiling (its structure a registered landmark) has been repainted to show fluffy white clouds emerging from a clear blue sky. From it hang restored chandeliers, which have been modernised and lowered. It is a room that epitomises how the hotel has strived to conserve its 18th-century heritage while transforming itself with a contemporary twist.

“The Hôtel de Crillon is intended to bring a new philosophy of what a palace should be in the 21st century,” says Marc Raffray, general manager.

Every European capital has a celebrated grande dame hotel, but few can match the history of the Crillon. The hotel’s façade was commissioned by Louis XV in 1755 as a backdrop to a statue of himself on horseback in the Place de la Concorde. The Count of Crillon went on to turn the building into a lavish private mansion, where his family lived until the turn of the 20th century. The 1778 French-American treaty recognising the Declaration of Independence was signed in its Salon des Aigles, as was the 1919 covenant of the League of Nations. Marie Antoinette took music lessons in the salon that bears her name and was guillotined outside on the Place de la Concorde.

Crillon’s mansion was turned into a hotel in 1909 by architect Walter-André Destailleur and its guest book ranges from Winston Churchill, Franklin D Roosevelt and Emperor Hirohito to Charlie Chaplin, Andy Warhol and Madonna. Then in 2010 it was acquired by Prince Miteb bin Abdullah bin Abdulaziz, a Saudi Arabian prince and minister of the national guard, who closed the doors three years later to begin a renovation that would restore its sparkle and reputation. It is now being managed by Rosewood Hotels & Resorts, the Hong Kong-based group that runs 19 properties worldwide, from Dallas to Cambodia. (For Rosewood’s president, Radha Arora, taking on the Crillon is something of a homecoming - his first job, aged 17, was in Les Ambassadeurs.)

Both owner and manager have stayed tight-lipped on the cost of the refurbishment, but the designers were clearly not counting the pennies, and a 380-strong team worked on the project. The number of bedrooms has decreased from 147 to 124 to bring more space and help create the atmosphere of a hôtel particulier - a grand private residence. Rates start at €1,250 per night and rise to €30,000 for the two suites designed by Karl Lagerfeld, creative director at Chanel, one of which boasts a solid two-tonne Carrara marble bathtub, as well as photographs of his cat, Choupette. 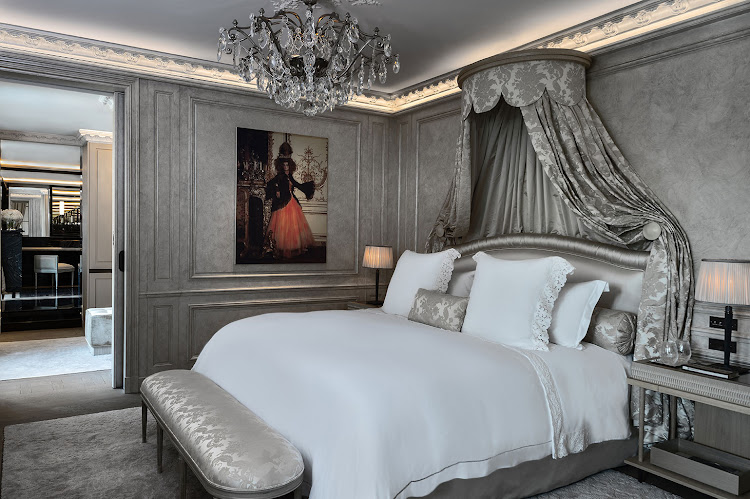 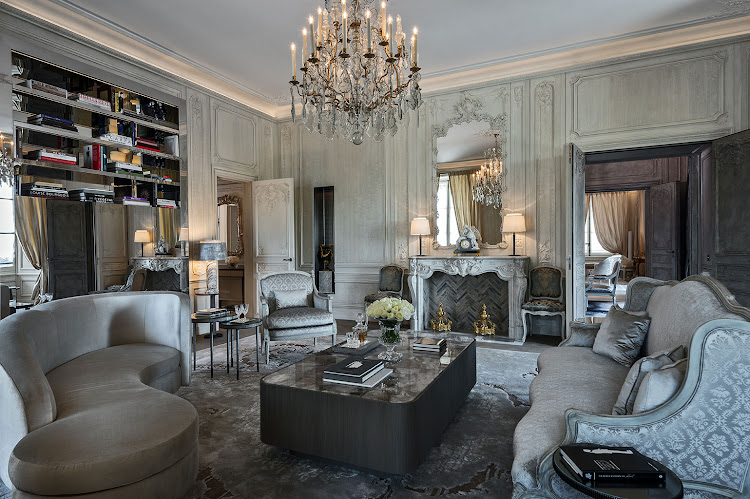 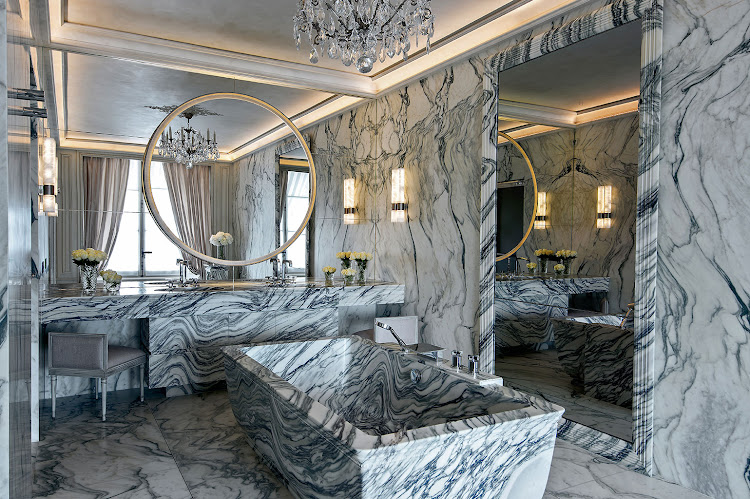 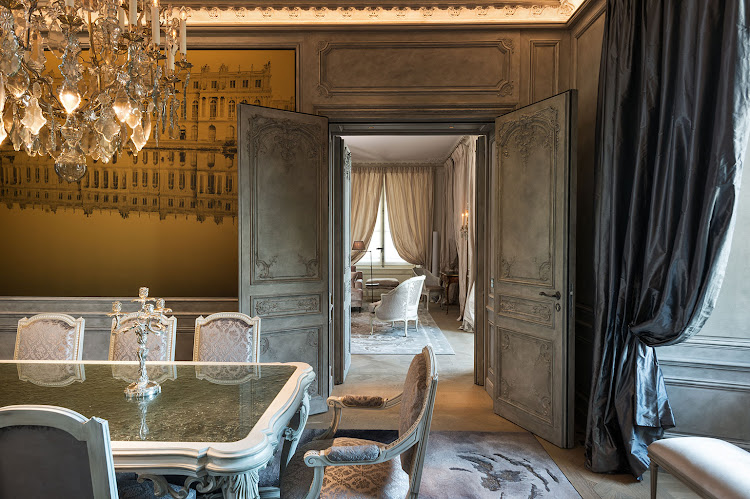 Marble is a theme that runs throughout - 40 types were used in a design scheme that emphasises French craftsmanship and heritage: Lalique taps, gold-and-crystal Baccarat decanters, and Lesage embroidery. Much of the work has been to brighten dark spaces and to modernise basic services - the hotel previously had no central air-conditioning system. That has been added, and the ceilings in the lobby, for example, were raised three feet to create a greater sense of airiness.

“We are in 2017, we are not in the 18th century,” says Tristan Auer, who trained under Christian Liaigre and Philippe Starck, and designed much of the ground floor. Auer’s vision, he says, was to “respect the personality of the Crillon” but equally “to be inventive...  and to be in modernity”.

A key priority has been to lure Parisians to the Crillon rather than just rely on the flow of foreign tourists, and so in the new layout visitors to the bar don’t need to walk through the check-in area. Indeed the area has been made smaller, reflecting how much of booking administration is now done online. In a similar vein, the concierge desk now has iPads for guests, and there is a pop-up area illustrating current exhibitions in the city. “We want to bring back the Parisian to the hotel,” says Raffray. “When you travel, you want to feel like you’re part of the city - there is nothing worse than feeling like a tourist.”

Now that Les Ambassadeurs has been converted into a bar, the hotel’s flagship restaurant is L’Ecrin, where the celebratory dinner took place on Wednesday last week. In contrast to the vast space that the old restaurant once occupied, L’Ecrin seats a maximum of 22 covers. Those lucky enough to get reservations will enjoy cooking by Christopher Hache, who spent two years travelling the world for inspiration while the refurbishment was taking place. Guests can choose between his “signature” 12-course menu (€260) or the seven-course “freedom” menu (€195), paired with an “oenological experience” that is €130 for the 12 courses.

The Crillon may have a remarkable heritage, but it is not without competition in a city where eight hotels hold the coveted “palace” status, a better-than-five-star classification introduced by the French government in 2010. And the Crillon’s revamp has lagged behind its rivals - a year ago the Ritz on nearby Place Vendôme reopened after a €400m refurbishment; the Plaza Athénée and Le Bristol have both been redesigned, and a new wave of Asian-owned rivals has arrived in the form of the Peninsula Paris, the Shangri-La Hotel and the Mandarin Oriental.

But the delay in the Crillon’s relaunch may end up having a silver lining. The mood in Paris - the second-most popular tourist destination in Europe - is enjoying a boost from the election in May of Emmanuel Macron, who has promised political renewal and an overhaul of France’s stringent labour laws and high taxes. Tourism in Paris, hit hard last year following the terrorist attacks, seems to be picking up. During 2016, occupancy rates decreased to a historical low of 69.4 per cent, down almost 10 per cent on the previous year, according to PwC. Now the Chinese tourists who frequent the likes of Hermès on nearby Rue Saint-Honoré are returning, and this year PwC predicts occupancy rates of 72.1 per cent, rising to 74.2 per cent in 2018.

The Crillon’s relaunch coincided with Paris’s Haute Couture Fashion Week, a fitting coincidence, given its long association with the city’s top designers. For two decades the hotel hosted the Bal des Débutantes, at which young swans would don magnificent couture gowns - often for the first time - and dance with their fathers. Bruce Willis and his daughter Scout, Alain Delon and his daughter Anouchka, Robert F Kennedy and his daughter Kyra were among those who waltzed in the glamorous Marie Antoinette suite overlooking the Place de la Concorde.

With the hotel’s closure, “Le Bal” moved up the Champs-Elysées to the Peninsula Paris, but on Wednesday night, the Marie Antoinette suite was in full swing once again. This time, the revellers were there for a fashion week soirée courtesy of French fashion retailer The Kooples. It is more high street than haute couture but perhaps it encapsulates the contemporary twist on grand French tradition that the new iteration of the Crillon is trying so hard to create.

Harriet Agnew was a guest of the Hôtel de Crillon (rosewoodhotels.com). Double rooms are currently available at the special opening offer rate of €1,250 per night including breakfast; the standard rate is from €1,420

Paris flaunts its arty side to boost flagging tourism

Visit The City of Lights without leaving Paris-Charles ...