Ladakh: an adventure race at the top of the world

The Adventure Racing Championship in Ladakh, more than 5 000m above sea level, tests even the hardiest of cycling competitors 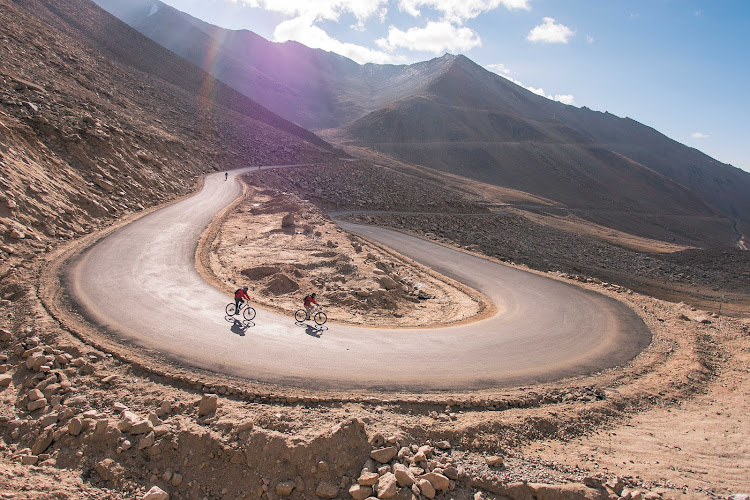 It's 4am and I'm winding up the highest motorable pass in the world. At more than 5 000m above sea-level, the twists, turns, and altitude gets the better of my colleague, the French journalist Laurent Houssin, and he asks to be left on the side of the road. We pull over into a truck stop and he disappears into total darkness and utter stillness. There are only stars and the sound of his feet stamping to keep warm.

The Tibetan driver and I continue up. We stop at the Pallu military checkpoint for 20 minutes. Shaukat Sikand, the race organiser, is meant to come down to help us through, but I see how easily the army lets others pass, so we chalo and continue up. And up.

At summit, it’s 5 600m and -9°C. The world is quiet, save for a Hindu chant blaring from the travellers’ hut. The wind catches the prayer flags opposite, and the snow is sluiced with the mountain rock. As the sun comes up, the range looks like a sleeping dragon’s lair.

Cycling for a cause

We’re higher than Everest Base camp. My phone dies — the battery can’t handle the cold or the thin air.

An hour later the buses start arriving. Bicycles first. Hero — an Indian brand — is a race sponsor and it has provided a fleet of white bikes for the local teams. There’s a muffled chortle as the pro-organisers spy bike stands.

When the competitors arrive, the amusement turns to bewilderment and, shortly after, concern. The Indian teams are completely ill-equipped. A handful have completed triathlons, but none have done an adventure race, competing in extreme conditions with no assistance. This is virgin territory and it can go dangerously wrong.

Only the Navy Seals have helmets and pullovers and a few a pack with water. The remaining 10 teams are in shorts or gym pants, with sunglasses and headbands. No gloves. They find bikes and start practising balance, cycling around in small circles. It’s cold, very cold, but the race can’t begin until General JJ Singh, the president of the Indian Adventure Racing Federation, arrives. One of the Australian competitors falls out — her oxygen count is very low — and two of the French feel they too can’t compete.

It’s day two of the 2016 Adventure Racing Championship in Ladakh: a gruelling 343km race against the clock, across the vast and barren Himalayas.

Day one was an “easy” 43km trek up the mountains. Cobus van Zyl, captain of the South African team, says later: “On that first day, 12km up, my lungs started burning and my head felt as though it would explode.” He pushed on, as did his team, and 48 hours later they came in first, beating the Patagonians by four hours.

It’s the first time India is hosting an adventure race and, as well as learning the ropes, the organisers are doing it a bit differently. To be fair, altitude and military presence demand this. Instead of a flat-out, no-sleep race, they’ve initiated obligatory rest periods. “We want to provide a world-class race, but the health of our competitors is a number one priority,” says the general, who can be seen at all times gambolling across the terrain in his 4x4, keeping track of teams and especially encouraging the army competitors.

We’re higher than Everest Base camp. My phone dies — the battery can’t handle the cold or the
thin air

Ladakh is India’s most remote province, at the top of the Jammu Kashmir. It borders with Kashmir and China and is closed off each year from October to April — the snow makes it impenetrable. This lends an otherworldly feeling. People survive on subsistence farming, doing it the way they have for centuries — small holdings gather around the sacred aqua of the Indus river, and fields demarcated by flat stones are ploughed by yaks or djos, a combination of yak and cow.

The architecture is clearly Tibetan: roofs are flat, fluffed up by straw to keep the cold out, and finished with a flourish of carving on the corners. The yaks are moved inside in winter, providing salty butter for tea and flatbreads.

Deeply spiritual Ladakh is also home to some of the oldest Tibetan Buddhist monasteries. Prayers are still said every morning at the Thikse monastery, and around the capital, Leh, young monks can be seen wandering, clad in maroon, a baseball cap on head and smartphone in hand.

The Dalai Lama comes in summer, and I’m confused when we visit Shey Palace, home to the current king. There’s a venerated photo of the Lama, and when I ask how long he has been praying in the private chapel I’m surprised to be told 200 years. I then remember the theology of reincarnation.

Throughout the town and surrounding countryside, prayer wheels are turned morning, noon, and night. A 15km wall leading out of town towards Thikse is made of prayer stones: people laying a stone in prayer. This is living, integrated spirituality, and it’s incorporated into the race.

After the teams have come down Khardung La and ridden a further 50km before paddling 52km down the mythical Indus river, they transition back to bike and cycle a further 58km.

After a short, but very steep 9.5km trek, the teams transition once again to bike, before riding down a spectacular mountain pass with absolutely no light pollution.

Thereafter, it’s a forced stop and they spend the night (or morning, for some of the later teams) at the Sikh temple, the Gurudwara Pathar Sahib. Later, I find out that the Gurdwara was built in 1517 to commemorate the visit to the Ladakh region of Guru Nanak Dev, the founding guru of the Sikh faith. I wonder what some of the more devout think of the female team members stripping off (adventure racing rules state each team have at least one female team member and members are within 50m of each other at all times).

There’s no time for pondering as the final leg, a 38km orienteering trek, is undertaken before a transition at the King’s residence, Stok Palace, for one last cycle over the finish line. South Africa comes in first. They’re experienced and graceful winners the whole way. Their main point of difference is determination — on arrival in Leh they immediately hailed taxis, ignored army orders, and went past the check point up Khardung La, thereby speeding up acclimatisation.

Afterwards, team member Ruan van der Merwe said it was an experience he would never forget. “Doing a 2 000m downhill in the space of 45km is absolutely spectacular,” he says “Even while freezing!”